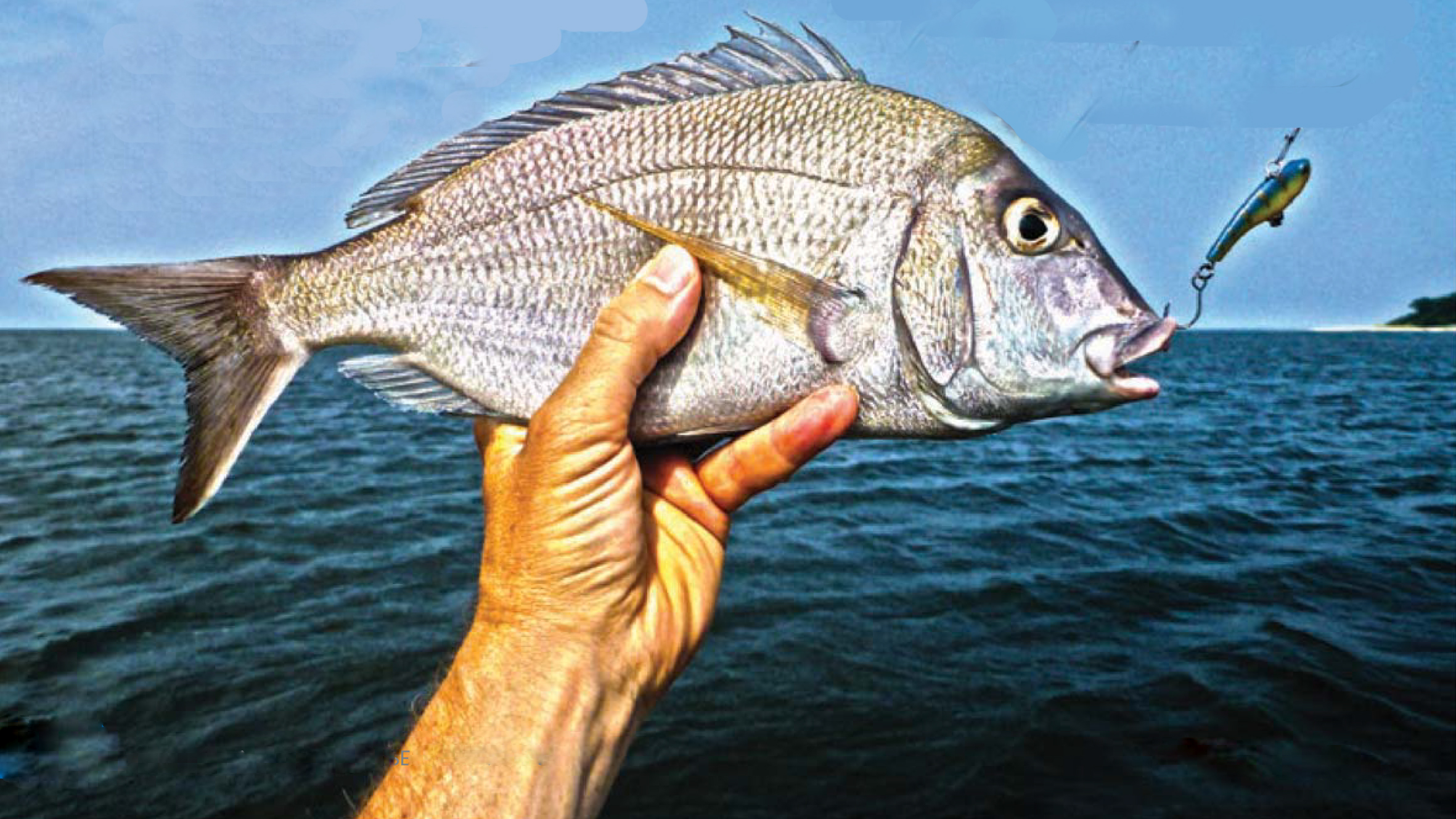 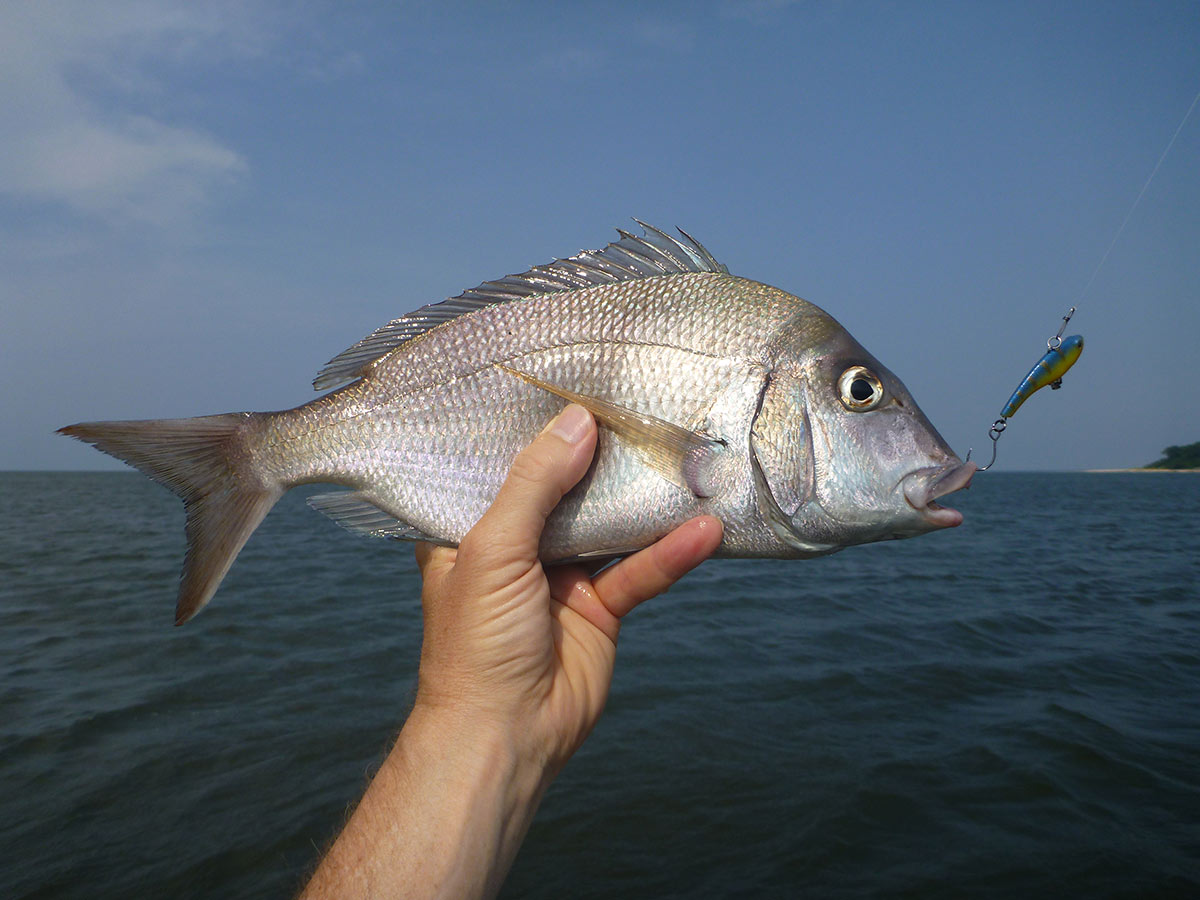 I was very surprised to see that these small plugs appeared to work as well, if not better than bait.

Fishing at its best should be a relaxing, soul-feeding experience, but like many other pastimes or hobbies it can become more like a chore if one allows it to go that way. There have been times in the past when I’ve allowed the simple joy of fishing to become bogged down with extraneous and unnecessary tackle and equipment. In the last few years however, I’ve made a conscious effort to downsize my angling efforts wherever it is possible and appropriate.

When it came to porgy fishing, for the last few years I thought I had reached my downsizing limit by employing small, plain jig heads tipped with Gulp fished from light spinning tackle in shallow water. I’ve had a ball catching big porgies this way, and was convinced that I had reached the pinnacle of porgy fishing fun, that is until last season when I happened upon a Youtube video (https://youtu.be/mrFnirLQ4VA) posted by New Jersey angler Roger Aye, creator of the channel Cooking and Fishing.

Roger was another shallow water-light tackle porgy enthusiast who’d caught his fill of the rapacious saltwater panfish and began to experiment with using different kinds of lures. What he discovered was that porgies go crazy over freshwater lipless crankbaits. This genre of lures may be unfamiliar to the saltwater crowd, so I’ll explain. They are crankbait-type lures with roughly the body profile of a peanut bunker, and are often filled with metal shot. When retrieved they vibrate rapidly from side-to-side, making quite a racket in the process. I had kept one of them in my freshwater box for decades and it hardly ever saw the light of day. Frankly it’s probably the last type of lure I’d expect a porgy to be interested in, but Roger’s video clearly showed him nailing one large porgy after another on the noisy little plugs. After seeing the video, I couldn’t wait to try out the method. Over the years I’ve caught the occasional porgy on lures, and they will eagerly attack Berkley Gulp, but I was very surprised to see that these small plugs appeared to work as well, if not better than bait.

I purchased the smallest plug I could find at my local tackle shop and headed to my favorite shallow water porgy spot. On my first cast it was hard to tell if the tiny lure was in contact with the bottom, but it didn’t matter. After a couple of twitches, the line tightened, and I was into a jumbo porgy, which, after an epic battle, came to the net. It measured 17-1/2 inches, my biggest of the season. In that instant I was sold on porgy plugging.

This method of porgy angling represents the ultimate in tackle downsizing. The box containing my entire arsenal of porgy-plugging paraphernalia fits in the palm of my hand. Besides allowing one the fullest experiences of battling these hard-fighting saltwater panfish, I’ve noticed that plugging can result in losing fewer large fish. Huge porgies can fight so hard that when using a heavy tackle their tender mouths can tear, allowing them to escape. The ultralight spinning tackle used for this technique effectively absorbs the berserk struggles of the biggest, drag-pulling pork chops, making lost fish a rarity.

Besides selecting out the largest porgies in a given area, lipless crankbaits allow one to fish completely baitless, with not so much as a trailer needed, so this is as clean as porgy fishing can get. And while porgies are known to occasionally strike other types of lures such as small spoons and epoxy jigs, these crankbaits will not cause line twist as those others will. I admit to having had concerns about these lures being prone to getting hung up when fishing over rough bottom. My experience so far has not shown this to be the case. On a couple of occasions my lure did get lodged in the rocks, but simply backing up over the snag resulted in the plug coming free.

The specific lure model Roger employs for this method is the Rapala UL Rippin’ Rap in size 04 (1-1/2 inches). In deeper locations with more current, he’ll sometimes opt for using a Slab Rap in size 05 (2 inches). The Rippin’ and Slab Raps are quite similar, the main differences being that the slab Rap has a slightly more elongated profile and sports a solid body not filled with shot.

On my initial trial I just used a Rippin’ Rap as it came out of the box, however the two small treble hooks these lures are fitted with at the factory are poorly suited to hooking and holding porgies. In addition, they make unhooking and releasing fish a difficult and potentially dangerous task. Thankfully Roger has tinkered around and figured out a good alternate hook arrangement that increases hook-ups, reduces the number of fish lost in battle, and makes unhooking a whole lot safer and easier. He recommends swapping out the rear treble with a single Owner 4101-071 in #2 or #4 size replacement hook. In addition, he removes the front hook altogether and replaces it either with extra split rings, or a #2 Water Gremlin spit shot sinker crimped onto the factory split ring to act as a counter-balance. While it’s a little bit of extra trouble refitting these plugs, it only takes a few minutes, and keep in mind that it’s a one-time effort. Once out on the water you’ll be fishing bait-free and will have nothing to do but enjoy the simple pleasure of battling jumbo porgies. Roger has listed links to his sources for the upgrade materials in his Youtube video.

In freshwater these lures are often simply cast out and cranked back to the boat with a steady retrieve, hence the term “crankbait.” With porgies however, to be effective these lures must be fished like a jig. I cast out the plug and let it sink all the way to the bottom, then reel in the slack and give the lure a few sharp twitches, or jerks. After twitching make sure to reel in any slack. As porgies most often strike the lure as it falls, keeping as tight a line as possible will allow you to better feel for strikes. When a bite is detected it’s important to react instantly to set the hook as it will take but a split second for the fish to realize it’s made a mistake and spit out its prize. Porgies tend not to engulf these lures, so many fish tend to be hooked lightly in the lips. This is where your limber, ultralight rod and a properly set drag come into play, absorbing the frenzied shakes and surges from your hooked fish and protecting it from tearing free.

Basically, you want to use the same type of rod you’d use to toss these plugs for freshwater trout and panfish. On my first outings last year I used a 5-1/2-foot soft taper-medium action spinning rod matched with a 1000 series spinning reel spooled with 6-pound braid, and it was perfect. I’ve also tried using a 6-to 6-1/2-foot spinning rod matched to a 2500 size reel spooled with 10-pound braid. This outfit was workable, but it was definitely harder to cast the lures and feel bites with the heavier tackle. On the business end of my line I add about 2 feet of 10- to 15-pound fluorocarbon leader material to guard against abrasion from bottom structure. Roger prefers go a bit lighter, opting for 8-pound test, but I prefer the heavier line as these lures tend to attract some interesting and occasionally formidable bycatch species. Expect to encounter anything from fluke and sea robins, to stripers and bluefish. A final piece of equipment that is essential for porgy plugging is a landing net. Since nearly all of your fish will be lip-hooked, swinging them over the rail is simply not an option.

This is a method that can be employed anywhere from North Jersey to Cape Cod, and can be especially effective late in the season. From roughly Labor Day through the month of September, the biggest porgies will move into the shallows to fatten up in preparation for the fall migration. In some years one can still find the jumbos in the skinny water well into the month of October. There are certain bottom types that seem to attract large porgies to the shallows. My best spots tend to have pebbly sand with some rougher, rocky areas in the vicinity. Porgies are by no means picky however, so it can pay off to scout out new areas that may at a glance not seem attractive. When searching a new area, I usually drift while casting up-current, which allows the ultralight lure to reach the bottom better. Once I catch my first keeper, I set my anchor and fan cast around the boat. If the water is deep and the current strong it may be necessary to continue to cast up-current. If wind is an issue, I cast downwind or even upwind. Casting at right angles to the wind will cause too much belly in the line, making it harder to detect bites. I’ve found this technique to be most effective in anywhere from about 6 to 20 feet of water. Beyond that it becomes too hard to maintain contact with the bottom. 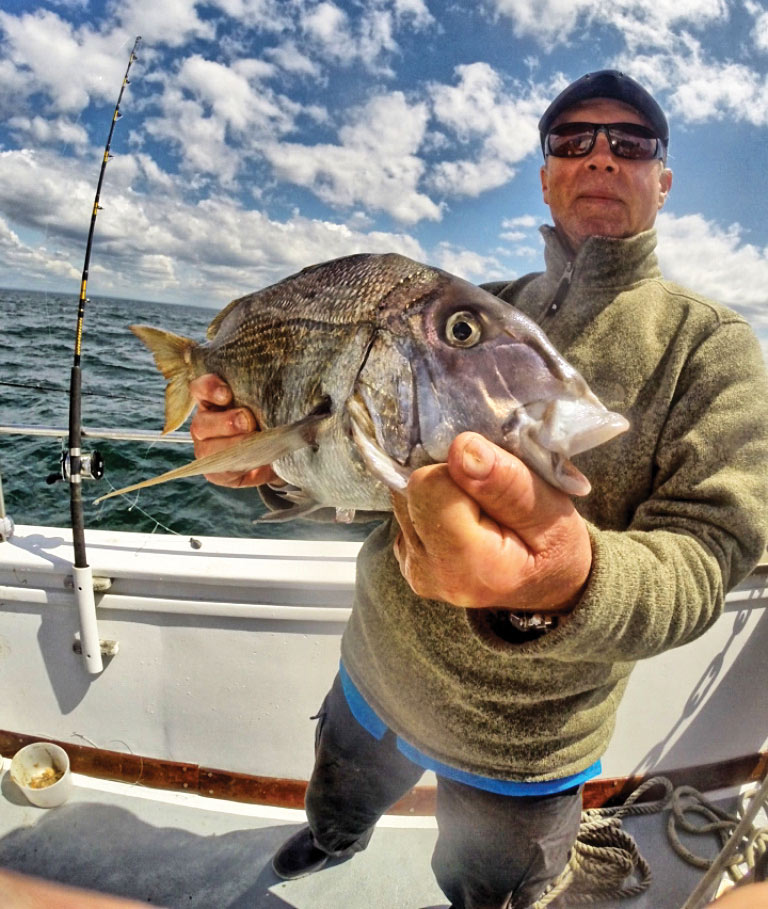 I’ll finish off by pointing out that this is a method of catching porgies that is well-suited to using a small vessel, be it a powerboat, kayak, or even a dinghy. Since you’ll be plying shallow waters, often near shore, and often around rocky structure, a small craft will allow you to better reach those prime spots where the big ones roam, as well as keeping in line with the downsizing concept.

When I was a kid, fishing back in the ‘70s and ‘80s, porgy fishing meant anchoring up in anywhere from 20 to 50 feet of water, setting out a chum pot, then employing a stiff boat rod rigged with 30-pound mono attached to standard old two-hook bottom rig baited with clam and weighted with a sinker of at least 3 ounces. Sure, that method caught plenty of fish, but it was quite a messy and involved operation. Besides that, the sporting element was distinctly lacking. If you are an angler still fishing for porgies using “old-school” methods, give this ultralight method a try. You’ll see the difference that minimizing your tackle can make towards maximizing your enjoyment of the sport.