Every fall run is different and is often dependent on the type of baitfish that dominate the surf line. An ideal scenario might be mullet and snappers in September, bunker, mackerel, squid or shad in October, and sand eels in November. White bait, or bay anchovies can also factor into the equation, particularly in September, and will draw bass and blues into the wash, but stripers can become fussy when they are on such small bait. Not all of these forage species come to the party every fall, or they may only show along certain stretches of the Striper Coast. When they do show, you want to be prepared with the right offerings, and that often means having the right lures to draw strikes when fish are feeding on a particular baitfish. While that will often mean matching the hatch, there are exceptions to every rule, especially when it comes to surf fishing, so you need to be prepared for a variety of situations.

Having fish feeding on mullet or snappers is a surfcaster’s dream. The presence of these baitfish can inspire some excellent topwater action. Furthermore, when stripers are feeding on these baitfish, especially in the case of mullet, there is the potential for good fishing at any hour of the day, including bright, sunny days. When mullet are making their move out of the bays and inlets, I make sure I add a couple of extra poppers with a blue finish to my bag. I’m not going to get into a discussion about colors here. I know there are some out there who believe color does not make a difference. I can only tell you that there have been far too many times when color absolutely did make a difference in producing more fish on a particular color plug over other colors. Some of those situations involved feeding bass blue plugs during mullet runs.

Poppers like the Super Strike Little Neck or Gibbs Polaris can be especially effective because they can be made to swim enticingly on the surface when retrieved slowly. Such a presentation closely mimics the movement of mullet as they swim along the surface creating a telltale V-wake. That swimming action with intermittent pops is often the right formula during a mullet run. Not surprisingly, metal-lipped Danny style swimmers can also be very effective during a mullet run. Floating minnow type swimming plugs with some blue finish can also be very effective, but lack the thrill of a surface strike. Mullet will traditionally hug the shoreline during their southbound migration. Casting as parallel to the shore as possible often produces better results than making long casts off the beach, unless the baitfish are moving along a bar or trough further off the beach.

While the mullet bite is normally confined to a dawn to dusk affair, snappers are another story. The same plugs in silver, gold or yellow finishes will turn the trick during daylight hours. After dark, the minnow style swimming plugs, along with darters and bottle plugs, can be the ticket to some quality action.

September can also see large quantities of white bait (typically bay anchovies) in the surf. Stripers can become especially finicky when the tiny bait dominates the wash, and I’ve seen bluefish get fussy at times as well. More times than not however, when blues and bass are mixed and feeding on white bait, the aggressiveness of the blues and scraps from their feeding will inspire bass to bite. Small bucktails or teasers are usually the best option when bass turn fussy over white bait. A rig that has proven very successful over the years has been a 2-ounce popper with an 18-inch length of 30-pound leader material tied to the tail eye of the plug (hook removed) and a 3/16-ounce white bucktail or teaser attached to the other end. The popper doubles as an attractor and as a vehicle to deliver those lightweight offerings. If you’re casting small bucktails in the 1/2-ounce range, leave out dressings like soft plastics, pork rind, etc. You normally want as small a profile as possible. Now I’ll contradict that by saying there are times when going in the opposite direction can draw the attention of fussy stripers. On more than a few occasions, I’ve had good success lobbing a medium or large Danny plug into stripers feeding heavily on white bait. The same ploy has worked for me with bass gorging themselves on tiny sand eels. Don Musso, the originator of Super Strike Plugs, swears by the addition of a small tuft of hook-less white bucktail on the tail of a metal lip swimmer when the fish are on white bait.

When larger baitfish like bunker, herring, shad, mackerel or large mullet move into the surf or pass through inlets and breachways, larger 7-inch versions of the minnow plugs, large Danny style plugs, darters, bottle plugs, 3-ounce poppers, pencil poppers and swim shads in 7- and 9-inch sizes should be included in your plug bag. Many of these lures now come in specific baitfish finishes like bunker, herring and mackerel, so if you are trying to match the hatch, these finishes are a nice option. Color can make a difference here also. During a couple of very good November runs where blueback herring were the featured forage in Montauk, casters tossing blue pencil poppers and 3-ounce Super Strike Little Neck Poppers during the day, and blue 3-ounce Gibbs Bottle Plugs (Casting Swimmers) and blue darters at night had a decided edge over other casters.

Here again though, the common belief that big fish want big baits does not always hold true and neither does matching the hatch. I’ve been in situations where big bass were obviously feeding on adult bunker but would not take my plug, possibly because the large baitfish were so abundant that my plug just couldn’t compete. Yet when I tied on a 1-1/2-ounce bucktail, those same fish did not hesitate. I’ve had this scenario occur on three different occasions.

Peanut bunker are a nice bait to have around since they will inspire surface strikes, but also because 4- and 5-inch swim shads can be deadly on stripers when these baitfish occupy the wash. The single hooks are an added bonus that makes releasing large numbers of fish a simple process. Bucktails with a lot of hair—preferably flared if you tie your own—that give a broad profile can be deadly when 3- to 6-inch bunker are on the stripers’ menu. Case in point: There was a steady stream of peanut bunker moving the length of Montauk’s Gin Beach to Shagwong Point, and the bass were all over them with most of the activity taking place within 20 feet of the beach. Trucks and people were spread along the entire beach, but despite the feeding frenzy taking place practically at our feet, there was only the occasional hookup. Even swim shads, which had been deadly most of that fall when peanuts were present along several other Long Island beaches, were being pretty much ignored by the fish. I retreated to the truck and tied on a bucktail, one of several that Steve Bunai had tied for me a couple of years before that matched the deep body profile of a bunker. Leaving it unadorned, or naked as some refer to it, I strolled back to the water’s edge. To make a long story short, first cast – more of a flip actually – and a teen size striper was on the beach. It continued that way for the next hour, with a fish every third or fourth cast. The only other caster catching at the same pace was an older gentleman that I had given a similar jig to.

Having an abundance of sand eels in the fall surf is enough to put a smile on the face of any surfcaster. Sand eels have fueled some epic surf fishing along the Striper Coast over the years. Most notably on Cape Cod in the ‘70s and early ‘80s, and Block Island in the mid-80s. Since then there have been many other noteworthy sand eel fueled striper runs along beaches from Cape Cod to the Jersey Shore, but none have approached the quality of those fish that gorged on sand eels in the Cape Cod and Block Island wash.

Many casters pray for a good sand eel run during the fall because when sand eels occupy the surfline, their presence normally provides consistent action for extended periods of time, unlike other baitfish, which tend to move through an area and take the fish with them, giving surfcasters limited opportunities to score. The fish are also susceptible to a variety of lures when sand eels are the primary forage. Needlefish plugs, minnow type swimming plugs, especially those that offer a slim profile, diamond jigs or other narrow bodied metals with tubes, bucktails tipped with a narrow strip of Fat Cow or Otter Tails, and soft plastics, especially those that emulate sand eels, like the weighted Tsunami Swim Eel (I have had excellent results with the 7-inch model), Savage Sand Eel, Al Gags Whip-It Eel and the Storm Wildeye Sand Eel, all have their moments in the sun when it comes to imitating sand eels.

While I believe profile may be more important than color where sand eels are concerned, there is no denying the popularity of green when it comes to sand eel imitations, and there are numerous examples of green outfishing other colors at various times along the Striper Coast. Case in point – the Block Island Green needles that accounted for a large percentage of the big bass that came from the Island in the 1980s. Mackerel, and even pink shined at various times, but it was that vivid green that was responsible for the bulk of the damage. In more recent times, along the sand beaches of Long Island and New Jersey, you would be hard put to find a diamond jig with a green tube as casters gobbled them up faster than tackle shops could get their next shipment. At one Long Island tackle shop, a dozen or so people waited over an hour for a delivery due that morning.

It’s too early to tell how this year’s fall run will shape up, but if you pay close attention to what is happening on beaches in your area, you should be privy to any developing patterns and the type of baitfish that are fueling the fishing. That information can be invaluable when it comes to gearing up for your next sojourn to the ocean’s edge. 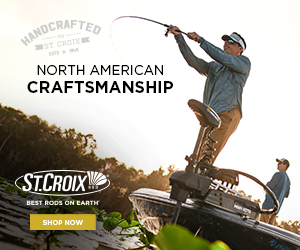 Here’s how to make your own durable jigs with a wide range of color options. 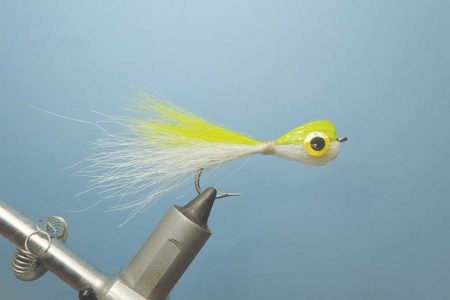 Here’s a pair of teasers that will catch most anything in Northeast waters, whether you choose the long rod or conventional tackle. 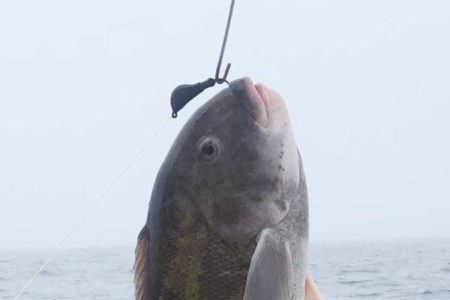 How-to: Make Your Own Hook-out

With catch & release increasingly popular and in some cases necessary, and growing concern about release mortality, this is a tool you should not be without.