When it comes to striped bass management, the Atlantic States Marine Fisheries Commission (ASMFC) made it very clear during the Amendment 7 process to the Interstate Management Plan for striped bass that release mortality was a major concern in the effort to conserve and rebuild the overfished striped bass stock. Adopting the use of non-offset, non-stainless circle hooks when bait fishing for striped bass is certainly a step in the right direction, especially when it comes to using baits like clams and chunk baits.

There is a lot more anglers can do in their effort to minimize release mortality, especially given current striped regulations, which call for a slot limit of 28 to 35 inches requiring all fish under 28 inches and over 35 inches be released. Needless to say, the vast majority of the bass being landed these days fall outside of the slot. Last fall I beached and boated hundreds of stripers that fell under the slot, maybe two dozen over the slot, and just four or five within the slot. Those percentages are in line with the catches of a number of other anglers I’ve fished with and spoken too, making how we release these fish critically important.

Perhaps the biggest factor contributing to a safe release is minimizing time out of water. No doubt, the best release is accomplished by not removing the fish from the water. There are a number of scenarios where this is easily done, but others can make it extremely difficult. Those fishing from boats with gunnels that allow you to easily reach a fish alongside the boat, can simply remove the hook and send the fish on its way. Even on larger boats with a lot of freeboard, it is possible to unhook a fish without bringing it into the boat if the boat is equipped with a long handled hook remover. ARC (arcdehooker.net) makes a 24-inch stainless steel dehooker that is ideal for stripers and hooks in the 5/0 to 10/0 range, and provides the extra reach necessary to unhook a striper at boatside. You can Google other hook removal tools, some of which are also available in longer lengths. Surf fishermen can easily unhook and release fish when wading in a calm surf or back bay, but the job becomes increasingly difficult when there is a good surf running.

The real problem comes when fish are brought aboard for photos and weighing. I have seen fish kept out of the water for at least 10 minutes while being weighed and photographed. When it comes to weighing, there is evidence that hanging a big striper vertically can lead to a shift in their organs. The better option is weighing the fish horizontally in a sling (used for weighing large carp) or simply measuring the length. When holding a fish for photos, cradle it horizontally rather than holding it up vertically by its mouth or gills. If you want a photo and measurement of that trophy striper, be ready before the fish is in the boat. The entire process should take less than 30 seconds. To show what is possible, during our last Gray Fish Tag trip to place satellite tags in two big Montauk stripers, one of the fish was tagged, measured and back in the water in just 20 seconds! Having pliers, a dehooker and scale or measuring tape at the ready will help insure the fish is returned to the water quickly. We shouldn’t need regulations to insure a healthy release. If we hope to have healthy stocks for years to come, we all need to do our part. 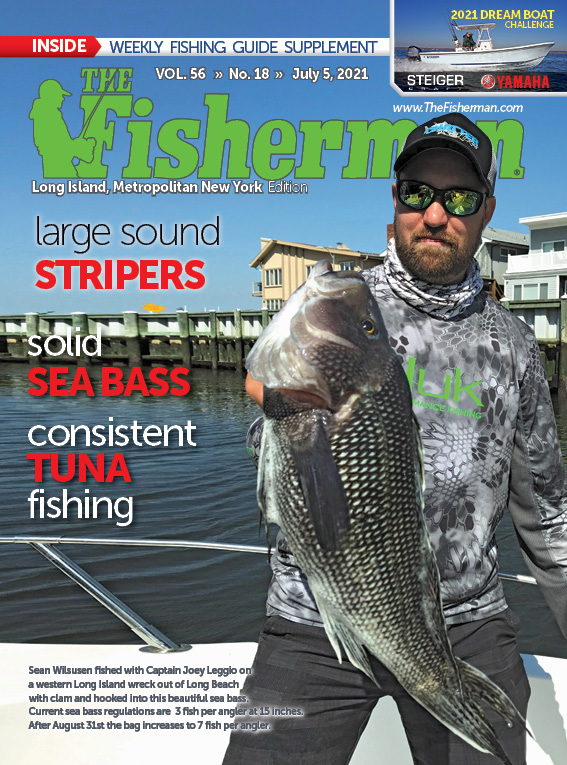