I have to say, in the recent years of expanding my fishing horizons, I’ve grown a deep appreciation for wreck and reef fishing. Luckily, around all of Long Island’s major South Shore inlets have strategically placed artificial reefs made up of an array of different materials, which in turn create some exceptional fishing opportunities for private, party, and charter boats.

Since taking this job, the subject line of certain emails excites me more than others. When I saw the email come across my desk from the New Your State DEC regarding new reef materials, it was the first one I clicked, of course. The addition was to the Shinnecock Reef. This reef is located 2 miles south of the inlet in 79 to 84 feet of water and spans an area that covers roughly 35 acres. Before the addition, the reef was already made up of eight vessels, four barges, surplus armored vehicles, four steel center beam railcars, one drydock, rock, a steel and concrete tower, Tappan Zee bridge materials, steel, and concrete bridge rubble, steel pipes, steel beams, and steel bridge trusses—quite the fishing attracting habitat already. Now you can add the 60-foot steel barge named Shannon C to the mix. 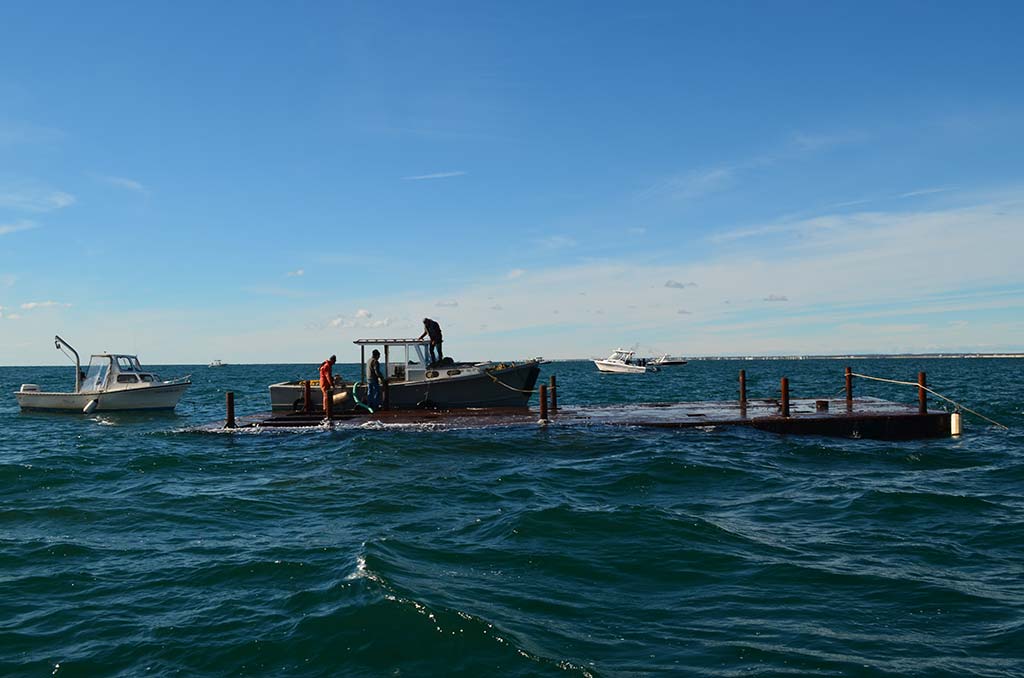 According to the DEC, the Shannon C was a steel deck barge built in 1973, formerly berthed in East Hampton and owned by DJ Whelan Corp. The Shannon C was used for more than 30 years in the marine construction business, building docks, bulkheads, revetments, launching ramps, and dredging throughout the waterways of Long Island, Hudson River, New York City, Fishers Island, Plum Island, Connecticut, and beyond. The barge also served as a launching platform for local firework events in Westhampton Beach, East Hampton, and Shelter Island.

The former owner, Mary Whelan of the now fish-attracting habitat said, “The barge Shannon C was named after our daughter Shannon. Shannon grew up on the water and enjoyed sailing, boating, fishing, surfing, or simply being near the ocean. It’s fitting that her namesake will become part of Shinnecock Artificial Reef and, over time, provide valuable marine habitat and enjoyment for others who adore the ocean just like she did.”

In due time this old steel ship will be at work again. As marine life clings to its steel, it will draw in numerous bottom dwellers along with the likes of blackfish, sea bass, porgies, cod, and fluke on the outskirts of it. Now the ship works for the anglers in providing optimal fishing conditions. Hopefully in the 2022 season I’ll pick a few fish off the Shannon C myself!

Reef construction is part of the “NY is Open for Fishing and Hunting” Initiative. This program was put together to benefit in and out-of-state anglers who frequent the excellent fishery that our island offers. Projects like these also boost state tourism and add more money to the economy. For more information about DEC’s Artificial Reef Program, visit DEC’s website ( www.dec.ny.gov) and follow the tabs, Home » Outdoor Activities » Fishing » Saltwater Fishing » Artificial Reefs.