The bite will be on and there for the taking.

Crisp and downright cold nights, hungry bass on the move, and the haunting reality of the last casts of the year—this is what makes November the pinnacle of the season on the south shore of Long Island.  From newbies to sharpies, our waters arguably never present more opportunity than they do in November. There’s no room or need for pessimists dreading the coming of the offseason.  The bite will be on and there for the taking.

Most of my striper fishing is off the beach in between Shinnecock and Moriches inlet come November. Short-term frustration at local spots or solid reports might expand the boundaries of where I’ll cast, and that flexibility is vital.  A steady pick of small bass in late November forces my hand, thinking the herd has moved west, while an early November skunk fosters the belief that the next wave has hunkered down temporarily to the east.  There isn’t another new or full moon to wait on that could trigger a bite.  I’ve embraced the urgency and been rewarded many times for breaking out of the everyday routine.

Whether I’m 15 minutes from home or an hour and change, what I’ve learned so far in success and skunks is a constant.  Typically, sand eels are the dominant bait, and matching their profile is the best presentation.  For all the plugs hanging from the pegboard in my garage, it’s often a 1- to 1.5-ounce white bucktail with a jig strip that incites a bite.  I’ve built up a great deal of confidence in the bucktail over the past few years. Sharing the same attributes as other fall run favorites in casting distance, ability to work up and down the water column, and matching multiple profiles make this weapon a must in every surf and tackle bag for late fall fishing.

In a close second place to the bucktail for favorites to throw in November are soft plastics.  Light wind and calm water days, I rarely hesitate to clip on a Tsunami Sand Eel.  These weighted soft plastics have great action and are a spot-on match the hatch winner.  It pains me to sacrifice quite a few to blues from cocktails to gators, but it’s all part of the game.

When those stiff and brisk winds are blowing, soft plastics on jig heads are next in the lineup.  I tend to favor paddletails for their action off the beach and at night in the bays on strong tides. Heavier jig heads provide the casting distance and ability to stay in the strike zone when sand eels are present. Thanks to knowledge shared from my local shop years ago, I’ve found that going a bit heavier on jig heads in calmer conditions can prove fruitful.  Not too long after, I gave what seemed to be an outsized offering on a calm but overcast day things clicked.  There had been a few bigger fish around at night, but late afternoon into sunset, the beaches were being swarmed by 24- to 30-inch fish willing to chase a meal.  While having to use a faster retrieve to stay just off the bottom, the pauses in the retrieve and quick jerk off the bottom create a small sand cloud which often caught the attention of an eager and hungry bass willing to give chase.

Much like the simplicity and time-proven status of the bucktail is a diamond jig with a green tube.  Let the debate roll on as it has for years, but I like green even after seeing hundreds of catches on white and red tubes both in person and in pictures.  No disrespect to the bucktail but there isn’t another lure I’ve caught so well on both by boat or shore. Be it vertical jigging in the ocean or reaching fish that bucktails and soft plastic can’t, the profile and action of this simple offering catches.

To tease or not to tease, that is the question.  I’m not a fan of losing casting distance or the battle scars on my hoodies from an errant teaser.  I am a fan of pulling doubleheaders out of the wash and connecting with fish feeding on smaller sand eels and baits.  The loss of casting distance is negligible in all reality, and I feel it is worth it for the reward.  Many a fall session, I didn’t need a hook on my A17.  I just needed its weight to get the teaser in the form of a medium-size fly or small rubber minnow in front of hungry bass.

Into Traffic, Not Empty Fields

It turns out it was experience and not luck that as I started fishing the surf, there would be guys to my left and right catching while I didn’t.  I knew how to cast and read fishing articles but couldn’t read the beach.  Doubling as a blind squirrel that found a nut here or there, once I recognized the tell-tale signs of where the bait would be pinned and bass would strike—things came together for me.

Sandbars are the easiest to spot, but rips, mounds, troughs, and ledges often lead to the most productive fishing. To the untrained eye, and mine still have some training to do, these patches of water can be tough to identify.  Years ago some sage advice was bestowed upon me: cast into water that looks different.  As time went on, I could spot the ripple and faint white water perpendicular to the beach, the subtle signature of a rip.  Just about any presentation worked close to the edge of the rip, with swimming plugs being a killer choice imitating a distressed baitfish.

Put your hand up if you don’t have enough time to fish.  Anyone? Anyone? Bueller?  As much as I’d love to scout the beach at low tide, it just doesn’t happen regularly.  When I can though it’s a treasure trove of intel to see the troughs and small channels that will feed the rips.  This intel does have an expiration date—often in just a few days as wind, moon and storms sculpt the sand into new creations.

Heading down the homestretch on the hunt for a big fish, they’re not going to waste energy hunting the entire stretch of beach they pass on the way south.  Finding the structure is the X marks the spot for a November treasure.

In the past decade, I’ve thrown just about every plug hanging in my garage.  A significant portion of them never caught, and for those thrown in the past Novembers, user error was most likely to blame. Last fall, a few needlefish I own came out of forced retirement.  I bought them early on because of what seemed like totally false claims of big catches.  The pictures of cows with ones hooked in their mouths had to have been Photoshopped.  There was no action I could feel, and I didn’t think it was possible to have a slower retrieve.  Like most upswings in the learning curve, it was one morsel from a fishing buddy that made a world of difference. Just fish it slowly like a bucktail. With this new insight, I caught some fish and proved my doubts wrong.

There’s no discounting confidence in a lure.  That said, I don’t see any reason not to expand the arsenal and catch bigger and better fish on plugs that many catch those better fish on. Darters, metal lips, bottle plugs, gliders, and the list goes on—no better time than November to try. For me, the darter has always been an enigma.  I read reports on how deadly they are, but I’m yet to catch more than a cocktail blue in previous efforts.  It’s not all sand eels in the feedbag for big migrating bass.  Larger profiles with more significant action than a diamond jig or bucktail grab the attention of big fish.  Bass are ambush predators and opportunistic feeders.  Bunker, juvenile tog, weakfish, sea bass, and cocktail blues are on the menu, and larger offerings consistently have made for trophy catches.  Keep an eye out for my darter article, or not, in the coming months.

Throwing a plug at 2 a.m. on the beach on a 40-degree night makes sense to most people reading this and not many others. While first light, last light, and nighttime are typically the most productive, the bass have no set mealtime, and more time on the water will only lead to more fishing memories.  There’s no other time of year that there’s a legitimate shot to catch at any time of the day.

Sanity tends to go out the window this time of year, and I for one, embrace it with open arms.  I constantly tell myself I’ll regret not going during dull winter days while counting down the minutes until spring.  I tell myself not to let the insanity narrow my focus to only where to throw my cast and where it lands.  Situational awareness is everything, and not just for where the fish may be.  While jetties and shorelines look inviting, danger lurks as well.  It’s devastating to hear, as we do each fall, about fishing turning to tragedy—use a wading belt, carry an escape knife to cut whatever needs to be cut in case of an emergency, use Korkers on rocks, keep bolt cutters and a first aid kit in the truck.

We are, in a way, and more so when fishing’s good, which it is each November. Had it not been for several people I crossed paths with over the years, I’d probably be much better at golf.  I threw my first cast once, as we all did.  I know the happiness, friendships, and satisfaction it brought.  While I don’t expect to get or give an exact spot, I’m more than willing to point someone in the right direction like I was pointed.

There’s one angler precisely whose voice, a real soft one full of motivation and inspiration I’ll be hearing in my head this November no matter how hard the wind is howling or the waves are crashing. It’s the voice of Fred Golofaro. If I’m a fraction of the fisherman he was when I take my last cast one day, I’ll be proud I decided to chase this passion as hard as I do. 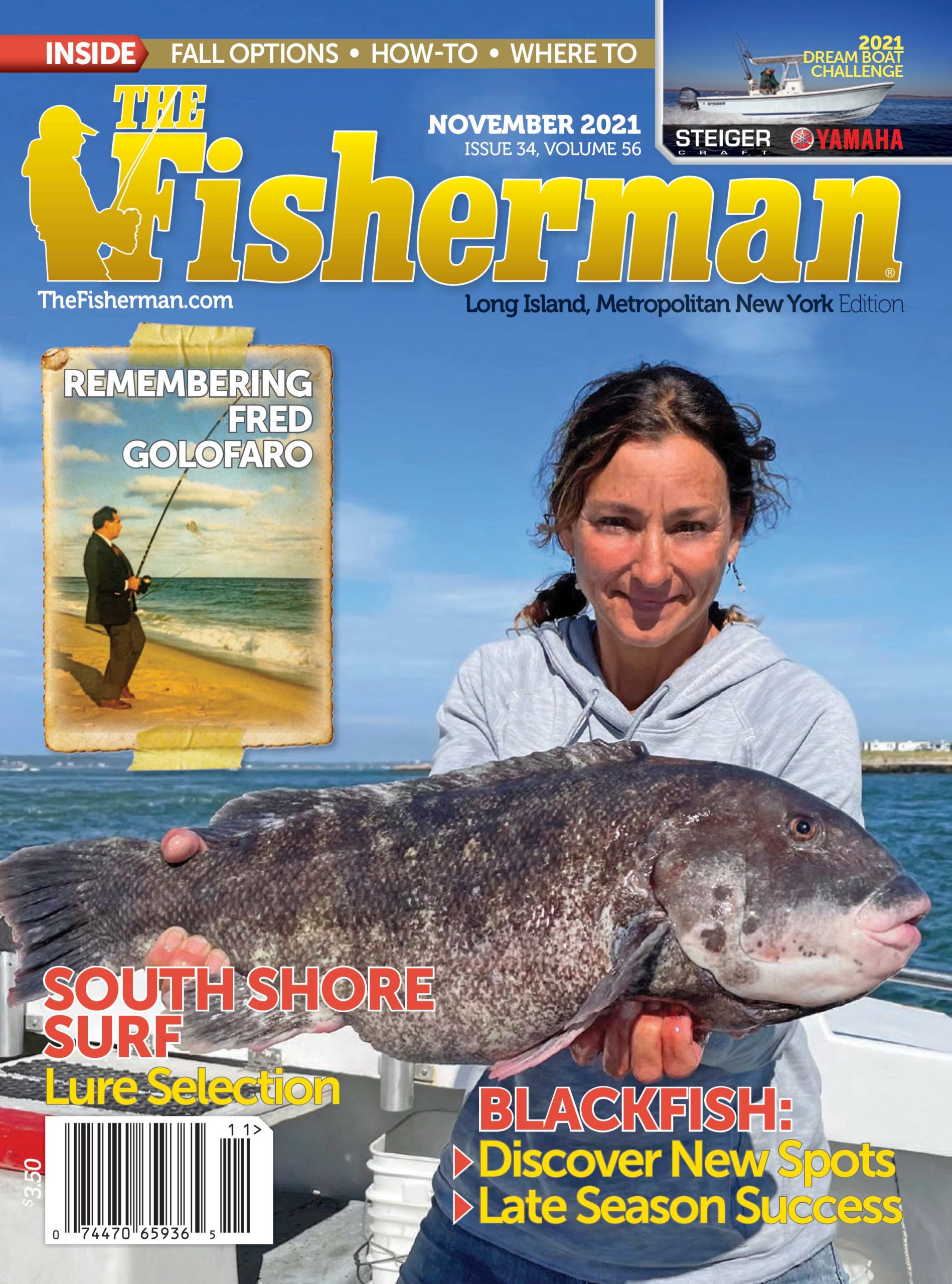