“This is a honeymoon, not a fishing vacation,” my wife-to-be teased as we whittled down the list of destinations to celebrate our vows. Mosey knew that beaches and angling would be involved in some form or another, but it was clear this wasn’t going to be 10 days of tight lines. Regardless of the where, we agreed to hire a local guide for one day—the rest of our stay would be rest and relaxation. Still, every potential place brought up, my fishing-obsessed brain immediately jumped to what species could be caught there during the month of October. Hawaii? Marlin and bonefish. Aruba? Mahi mahi and wahoo. When we finally settled on Costa Rica, the target was roosterfish or bust. I had seen enough forum posts and YouTube videos to know this section of Pacific coastline was in the heart of their range from Baja California to Peru. Recognized for their size, brute strength, and unmistakable rooster comb, this inshore gamefish was high on my bucket list.

Fast-forward through a whirlwind six months and two newlyweds are in a taxi van on a dirt road in the northwestern region of Costa Rica known as the Guanacaste Province. October is the height of the country’s rainy season, but we were in a traditionally dry area and had a picture-perfect morning—warm temps, blue skies, and light winds. The driver left us at the water’s edge in the small fishing village of Potrero where we met Ralph Solano, our heavily-recommended guide for the day. Ralph was rigging up three kayaks, his preferred mode of transportation when chasing roosterfish. At the time, my wife and I had never fished from kayaks before, so he gave us a quick primer before shoving off.

It was dead low tide overlooking scenic Potrero Bay, and howler monkeys were making their presence known in the tree line behind us. The entire bay was teeming with life like an episode of “Blue Planet.” There were countless sardines so densely packed that they turned the turquoise water brown. Right in the wash there were bigger fish slashing through the schools of bait sending them into the air and raining back down. A few locals were fishing the surf, but instead of rods they were using wooden spools, line, and simple metal lures. They lassoed their offerings over their heads and into the water then retrieved them by wrapping the line back around the spool.

Ralph set us up for light-tackle trolling around the shoreline while he secured our bait for the main event. We paddled along a rocky stretch with shiny lures trailing behind us. My wife had the hot hand and landed a few feisty Spanish mackerel that were kept for the table. In the meantime, Ralph jigged up four precious moonfish with a Sabiki rig like the one I use to catch sea herring in winter back home. Silver in color and the size of a saucer plate, moonfish are a favorite menu item of the roosters in Potrero Bay. They were stashed in Ralph’s handmade PVC livewell that he towed behind his kayak to keep the baitfish hearty throughout the trip.

With bait now onboard, we switched over to beefier conventional gear and paddled a few football fields further out in the bay. Being that far from shore in an unfamiliar area felt a little unnerving at times, but Ralph knew the water well and that’s where big roosters roamed. With circle hooks pierced through the backs of our moonfish, we payed out several feet of line behind our kayaks. The offerings swam down with no additional weight as we began slowly paddling between two rocky outcroppings.

Not more than five minutes passed before hearing the sweet sound of line peeling from my spool. Just a few cranks of the reel handle and the circle hook did the rest, burying itself into the corner of the fish’s mouth. I could tell it wasn’t very heavy, yet the fight was incredible. After a couple of minutes I saw flashes beaming from under the kayak, then the seven long spines of the dorsal fin from which the roosterfish gets its name. I grabbed the fish by the wrist of its tail for a quick photo before torpedoing it head-first back to the depths.

Mosey didn’t have to wait long for a Costa Rican sleigh ride of her own. Her live moonfish was soon gobbled up and another nice fight ensued. With some coaching from Ralph, she looked like a pro subduing her first roosterfish (handling it for a photo was another story). With two target species caught and released the trip was already a success, yet our guide was determined to put us on a larger specimen. I have been befriended a number of guides over the years, but never met one as passionate or enthusiastic as Ralph. He didn’t own fancy kayaks or fishing gear, but he was a fish magnet and a heck of a teacher.

We paddled out to deeper water and sent down our largest bait. There was a longer wait between run-offs this time, but it was well worth it. From its initial run I could tell this fish was in another size class altogether. The kayak was getting towed and turned with ease and the rooster took much longer to tire out. Ralph even slapped his paddle on the surface strategically in order to drive the fish toward the shallows. The tense tug of war went on for a few of the longest minutes of my life before I was able to grab the steel leader and hoist up my prize. Mosey snapped a memorable photo with our waterproof point and shoot before the fish kicked-off like a maniac. It was somewhere in the middle of that encounter where my admiration for roosterfish truly began—to this day, they are one of the toughest and coolest looking fish I have ever caught.

Out of bait and high on adrenaline, we triumphantly paddled back to shore and shared fish stories over ice-cold Coronas at a beachside bar. As crazy as I thought I was about fishing, Ralph was tenfold more. We could easily sense his pride for the life he made taking people fishing in this beautiful corner of the world. Ralph was a lucky man to have that oasis practically to himself. Before departing back to our resort, he brought us to his home in the village and introduced us to his lovely wife. Like all Ticos we met on our honeymoon, they were genuinely kind and happy to host us.

Sadly, while writing this article, I learned that Ralph passed away in April 2018. He died way too young, but made a lasting impression on so many during his life. We had lost touch over the years, but I am thankful to have known him and grateful for the experience he gave us in Potrero Bay. I hope to return to Costa Rica again someday and put to good use what Ralph taught me. 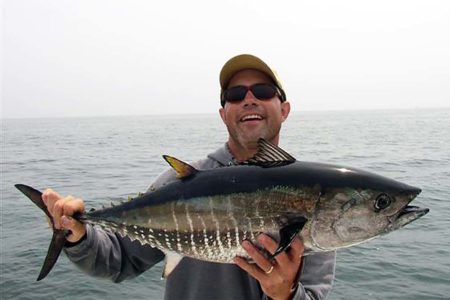