The fluke that situate themselves in Ambrose throughout the season can range from shorts to monsters of over 15 pounds.

Sail south of the infamous shipping lane of “The Narrow’s” past the Verrazano Narrow’s Bridge, past the several ports of the Ambrose Anchorage and you’ll soon be in Ambrose Channel, which is one of New York Bight’s greatest doormat fluke hot spots.

Ambrose Channel (40.31 638 N/73.592 550 W) is the gateway for global tankers, freighters, cruise ships, commercial and private small craft vessels to and from New York Harbor from the Atlantic Ocean. Although the channel borders the state waters of both New York and New Jersey, the entire channel is considered New York waters, therefore anglers must observe New York regulations when fishing in Ambrose Channel.

Since Ambrose Channel is a major shipping lane, great caution must be taken when navigating and fishing this stretch of water. The ships have the “right of way” as they cannot maneuver easily and refusal to do so promptly will bring a visit from the Coast Guard. In addition, the wake of these ships are often large, therefore it is always best to ride the bow of the boat towards the swell since taking a wake broadside on a small vessel can possibly capsize. 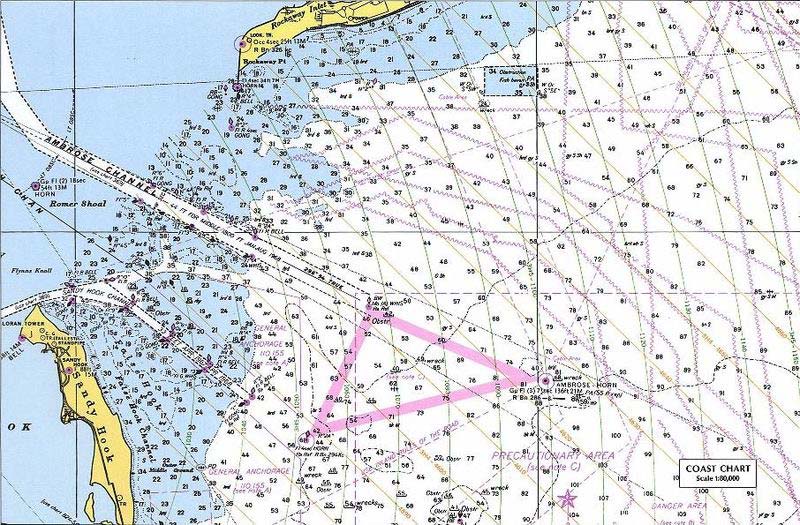 The fluke that situate themselves in Ambrose throughout the season can range from shorts to monsters of over 15 pounds. The water is deep in the range of 50 to 120 feet and the current often runs strong. Sturdy gear and heavy sinkers or jigs are a must. If you’re not on the bottom, you won’t catch fluke, therefore it would be best to employ braided line with a 40-pound fluorocarbon shock leader which will then require less lead and provides a better feel of the bottom and cunning fluke. Most veterans who fish throughout the channelprefer to jig a Chicken Rig with a 3- to 5-ounce Spro Bucktail and a Spro 1-ounce bucktail as a teaser 18 inches above the main bucktail. Use a Gulp 6-inch Swimming Mullet on the large bucktail and a 3-inch Gulp Swimming Mullet on the teaser and fish the channel edges which produces many double-digit fluke each August and September. When the current is moving hard, a sliding two-hook fish-finder rig lanced with 8 to 10-inch fluke belly, mackerel or sea-robin strip baits are best. Be prepared to use sinkers to 16 ounces in tough conditions. With that said, try to fish here on days that light winds are forecasted.

Open and charter boats from as far as Jones Inlet Long Island and Central New Jersey come and fish Ambrose as the rewards of big fluke make it all worthwhile.