Northern kingfish are found along the Atlantic coast of the United States from Florida northward to Cape Cod.  They are most abundant from Chesapeake Bay to New York, but are known to stray as far north as Casco Bay in Maine.  The northern kingfish also inhabits the waters of the Gulf of Mexico from Florida to the Yucatan. Members of the drum family, they are usually found in schools along shallow coastal waters from late April to October.

Scientists do not know where northern kingfish migrate to during the winter, but it is speculated to be offshore in deeper waters. Kingfish stay to the immediate area of the coast while visiting during spring and summer months, frequenting both inshore and open waters.  They may even enter brackish waters near the mouth of river systems. They tend to run in schools, and stay close to the bottom, preferring hard, or sandy habitat, and feed on shrimp, crabs, and other crustaceans, small mollusks, worms, and young fish. Northern kingfish grow to a maximum length of 18 inches, and can weigh up to 3 pounds, but they typically average between 10 to 14 inches in length, and weigh a half to 1-1/2 pounds. Their average life span is 4 years of age.

This species has a long first dorsal spine, and one barbell, or a short, fatty growth on the lower jaw/chin. The fish is mainly silver on the bottom, with obvious bronze coloration on the top half of the fish, with darker angled bars (bars are vertical markings on fish that help in field identification of several species of fish), or stripes. The first two bars form two very distinct “V” shapes that help to identify this fish as a northern kingfish. The eye of a kingfish has a vertical pupil just like that of a domestic cat, and they lack any canine teeth.

Northern kingfish spawn in bays and sounds from April until August each year. Spawning occurs at the bottom of bays and sounds, but has also been reported to happen out of estuaries.  Older fish will spawn first.  Males become sexually mature approximately at age 2, and females around 3 years old. Eggs are released and float for 46 to 50 hours before hatching in waters 68 to 70 degrees Fahrenheit. Young and fry of 3/4- to 1-inch in length already show most of the characteristics of adult fish. Kingfish are 4 to 6 inches in length by their first winter, and average about 10 inches the second winter. They do not have a swim bladder so do not make the typical croaking sounds like other members of the drum family during spawning season.

Northern kingfish are one of the better table fishes, and a favorite with surf fishermen, especially along the coasts of New York, New Jersey, and southward. The best fishing is typically in mid to late summer when they can be pursued in the surf, or by boat close to shore.  Size 4 or 6 hooks baited with either clams, bloodworms, or squid cut into small pieces are the best baits. Bay fishing is best by anchoring in shallow water of about 8 to 15 feet deep, and using a chum pot with clam or bunker chum. The same bait and hooks are used while surf fishing or fishing from a dock or pier. Light spinning or baitcasting tackle will add to the fun of catching these scrappy bottom feeders, and moving your bait slowly along the bottom will often improve your catch rate.

In the words of a well known angler cited in the book Fishes of The Gulf of Maine by Bigelow and Schroeder, “no fish that swims the sea makes a better dish.” 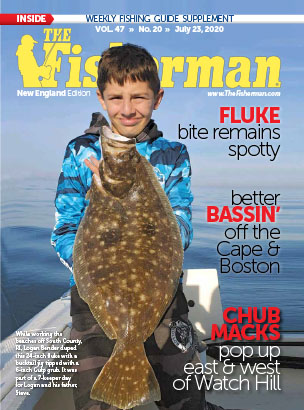 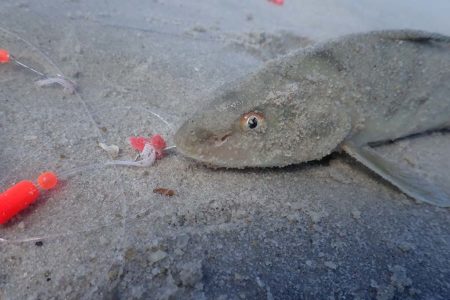 Summer Surf: Hail To The Kingfish