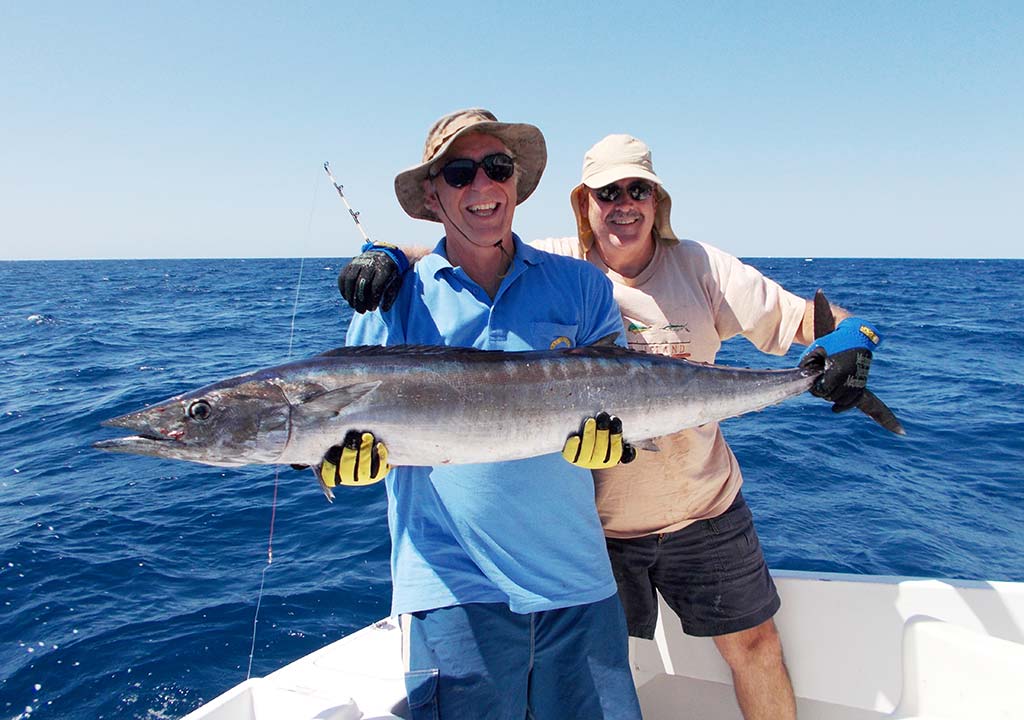 September provides a great opportunity for coastal anglers to end their season with a bang, featuring non-stop action and some tasty fillets for the freezer.

September is a transition month for many weather and fishing-related events. The last days of summer are fleeting like an outgoing tide and the autumnal equinox signals the return of expanding days of darkness. The preceding months’ prevailing S/SW winds shift to a more NW flow, as Mother Earth turns on her axis and changes both the duration and angle of sunlight, accompanied by chillier morning and evening air temps. The warm core Gulfstream eddies that fed the inshore, near offshore and distant canyon areas in July and August are starting to break up, hammered by an incessant parade of alphabet storms marching up the Eastern Seaboard. The dissipation of mid-70s inshore canyon water, combined with those chilly NW winds, sends an unmistakable message to a variety of exotic pelagics that visited the Northeast Coast for the summer that the party is over. It’s time to get packing and head home to the wintering grounds, wherever they may be. September will usher in a massive migration of over a dozen species to distant waters, triggering an urge for those exotics to chow-down and store some energy needed for their long journey. For us, it is one last shot at scoring these summertime exotics. 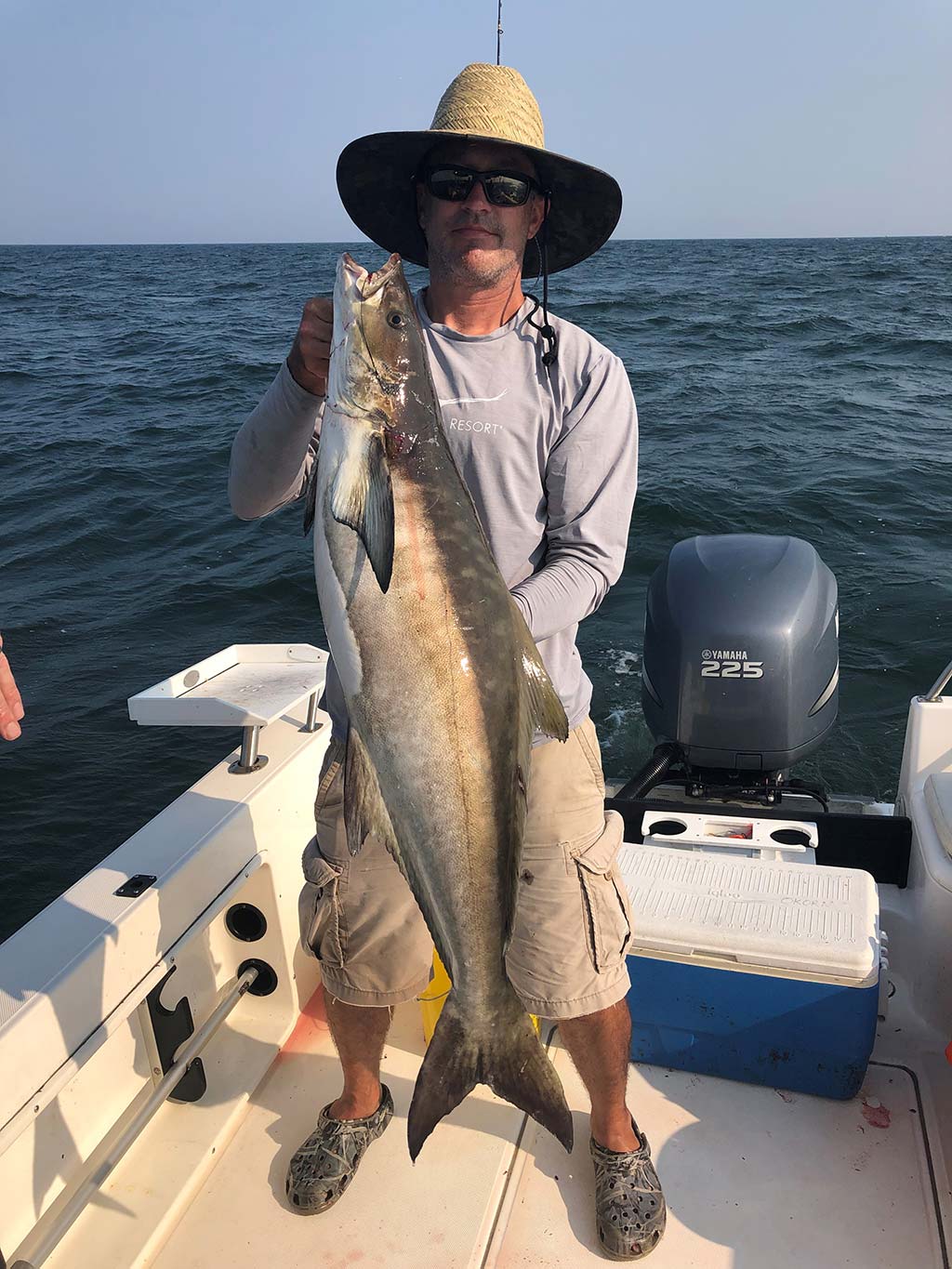 If the past few seasons are any reminder of what to expect for this fall, be sure to double up on your vessel’s dock lines down at the marina, because it’s likely to be a parade of one storm system after another for September and October. Due to all of the aforementioned migrational movements, there’s no doubt that September has the potential to be the best fishing month of the year. The main challenge facing anglers is the ability to get out to the nearshore and offshore grounds, when the weather can change radically from one day to another. Those dreaded alphabet storms, so called since they are named after the consecutive letters of the alphabet (A, B, C, etc.) can wreak havoc on coastal areas, even if they are passing offshore. The aftermath of direct hits and near misses are well known to anyone who lives in a coastal community. However, even if these passing storms don’t bring the usual rain, flooding and devastation, distant weather systems located hundreds of miles out to sea create significant storm surges that can make getting in or out of an inlet a real adventure. This “adventure” becomes downright dangerous during the six hours of outgoing water. Many boats and their crews have learned the hard way not to mess with extreme wind/wave-against-tide scenarios. It is scary and no fish is worth risking your boat, your life or the lives of your crew – safety is the key.

When planning my September trips, after first looking at the marine forecast, the next step is to ascertain the location of the most favorable warm water close to home port, searching for any pinch-off eddies or Gulfstream filaments that might be within range. To get this done, I have an annual subscription with Terrafin, a Cali-based West Coast operation that offers quality services at a reasonable price tag. I have been using them for the past two decades and see no reason to change. They usually update their satellite surface sea temp charts three to four times per day and this data has been directly responsible for making many dozens of my offshore trips to near-offshore and canyon waters successful. If you are a small boat operator like me, it’s always a plus to have “little friends” out there to communicate with for real-time fishing reports and/or safety issues, so be sure to buddy-up with other boats when heading out and stay in touch. The key ingredient to successful September pelagic hunting is to “be flexible.” Minimal winds and calm seas don’t always fall on the weekend, so be ready to leave on 12-hours’ notice if your weather window indicates that the coast is clear and it’s time to fish. 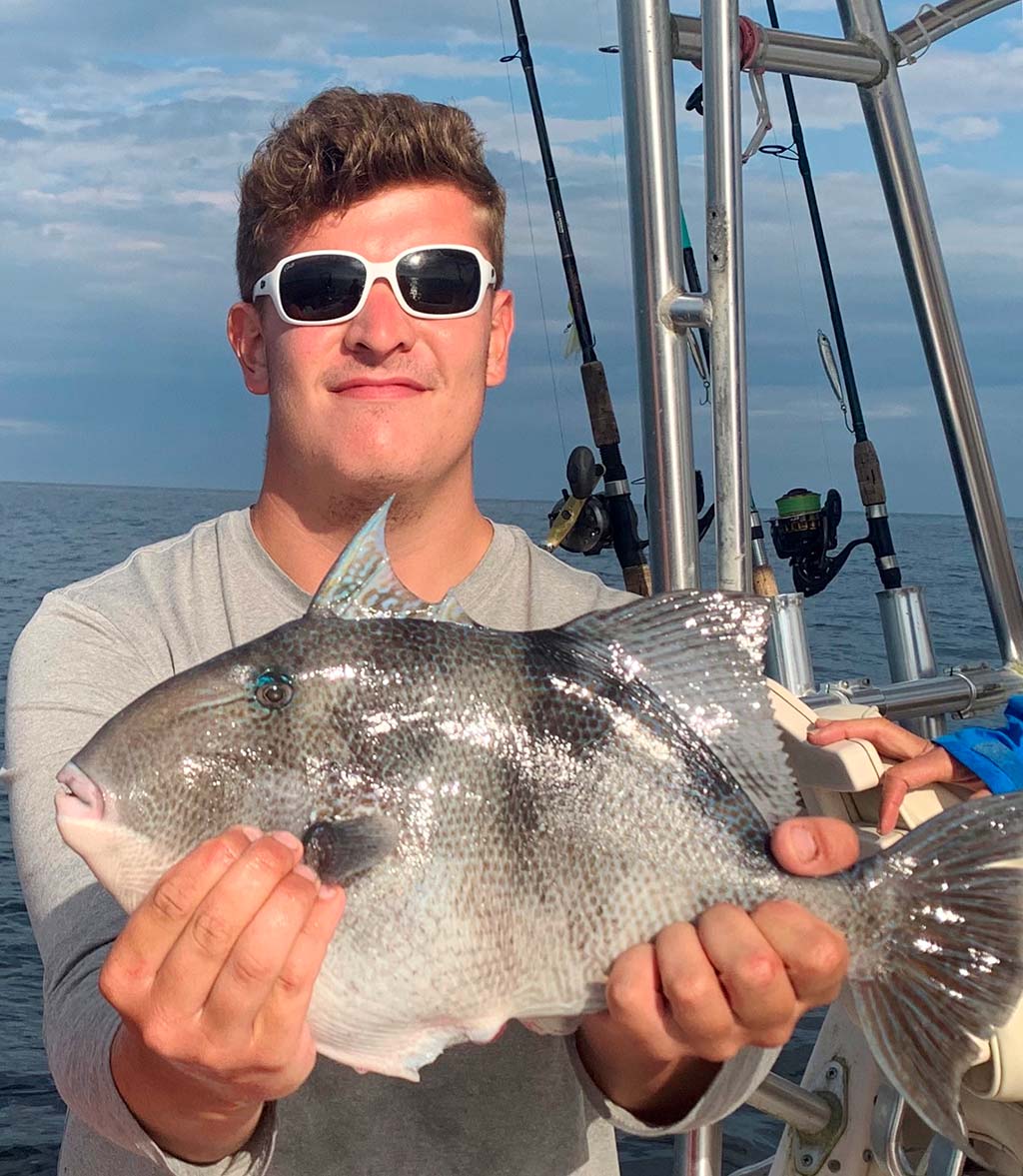 For bay, inlet, inshore reef and coastal aficionados, the first few weeks of September should see the last flurries of activity from pelagic visitors like triggerfish, cow nose rays, chub mackerel, black drum, Spanish mackerel, cobia, frigate mackerel, peanut dorado, jacks, blue runners and the like before they start heading south. The first tropical storm or two in September will send them scurrying and it’s a case of here today and totally gone tomorrow. The usual resident suspects like fluke, black sea bass, porgies and weakfish are also getting ready to move out to their wintering grounds, located at the edge of the continental shelf in 350 to 500 feet of water. Once this second group of ground fish starts heading south or east, depending on where you call home port, it’s typically in a slower, more deliberate fashion. You can definitely stay on top of these fish as they are moving off through the end of October, intersecting with the migrating masses at wrecks, fathom curve areas and other holdover points each week, but in gradually deeper water.

The wild card for the 2021 season has been the massive bunker schools that have invaded the Jersey coast, southern shore of Long Island and southern New England coastal areas. This has attracted atypical activity in shallow 15 to 30-foot depths from predator species like sharks, cobia, bluefin tuna, porpoises and huge whales. Various anglers and drone operators have posted some astounding videos of this frenetic feeding activity on YouTube and it must be seen to be believed. This is definitely some unusual stuff and predictably, and many hundreds of coastal anglers have gotten into the fray, catching species that you don’t normally find just outside the surf line. 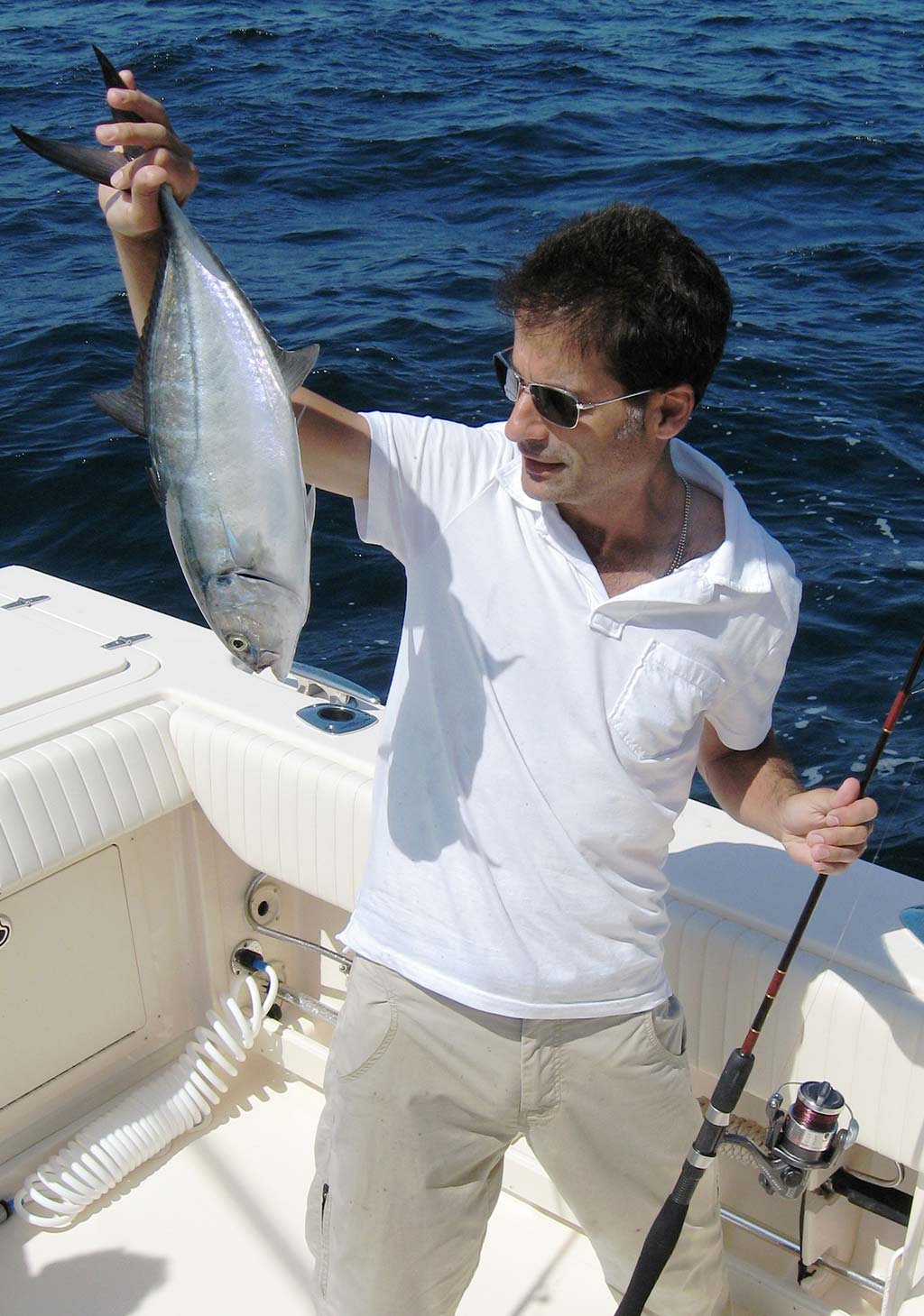 For offshore anglers, longfin albacore, yellowfin tuna, big eye tuna, white and blue marlin, along with wahoo and dorado will all be very susceptible to how the alphabet storms affect their environments. If the Gulfstream eddies begin to break up as a result of the storms, this could initiate a chain reaction that impacts both baitfish and predators, with the action moving down to more southern canyons. When fishing the edge in 100-fathom areas, some years I’ve caught dorado, albacore, big eye and yellowfin into the middle of October in the right conditions (fewer storms and the prevalence of 72-74 degree Gulfstream water). In other years there was a one to two week hiatus on any offshore trips due to unfishable weather conditions and like a bad magic trip, the next time out they were all gone! Bluefins have a higher tolerance for extreme sea temperature variations and will typically hang out until early December, showing up in some of the most unlikely and unsuspecting places, like when blackfishing or trolling for stripers along the beach. If there’s enough bait around to their liking and daily calorie consumption needs, they will be there. 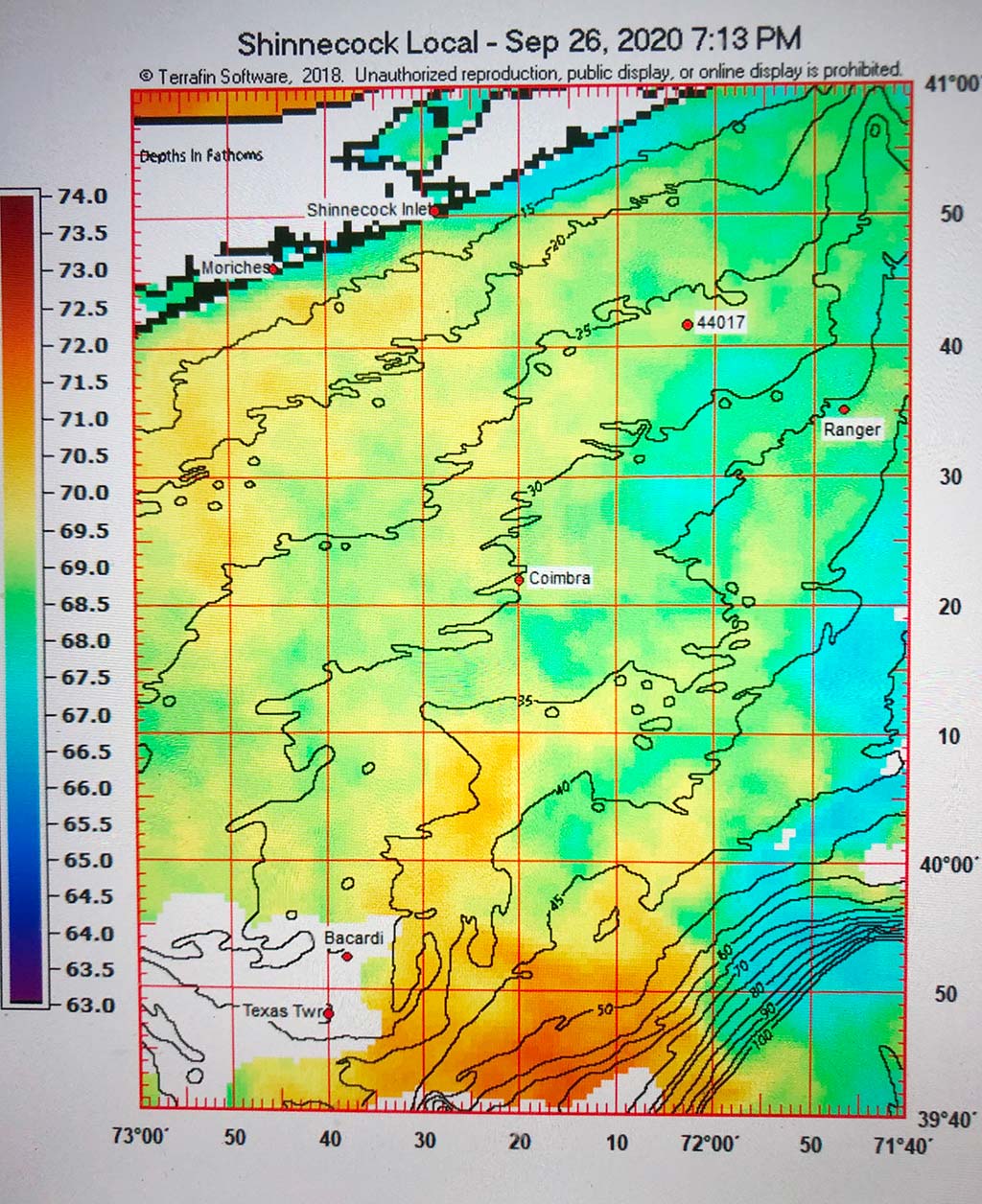 Since many of the aforementioned summertime visitors will still be in their inshore haunts before time runs out, the same tackle and techniques you were using in July and August will still apply until they suddenly leave town. A good all-purpose 6.5 to 7.5-foot spinning rod matched up to a 4000 or 5000-series reel that can cast a 1 to 3-ounce bucktail, metal jig or epoxy jig spooled with 30-pound superbraid should do the job for most coastal anglers. I have a few of these outfits that I employ on my MarCeeJay, including a Tsunami Salt-X combo, Okuma Azores 4000H combo and a Penn Carnage II 5000-series combo that all do the job from the surface to the bottom. In a pinch, if we need to send heavier jigs or baited hooks to the bottom, these multi-tasking spinners will get it done, especially when using fast tip, medium-heavy action blanks. Competitive products from Shimano, Daiwa and others will certainly take care of business. It is a matter of personal taste as to which rod and reel combo has the internal fortitude to stand up to potentially large pelagics (like a 50-lb plus cobia dragged from a bunker school) and what feels comfortable in your hands and is within your budget. 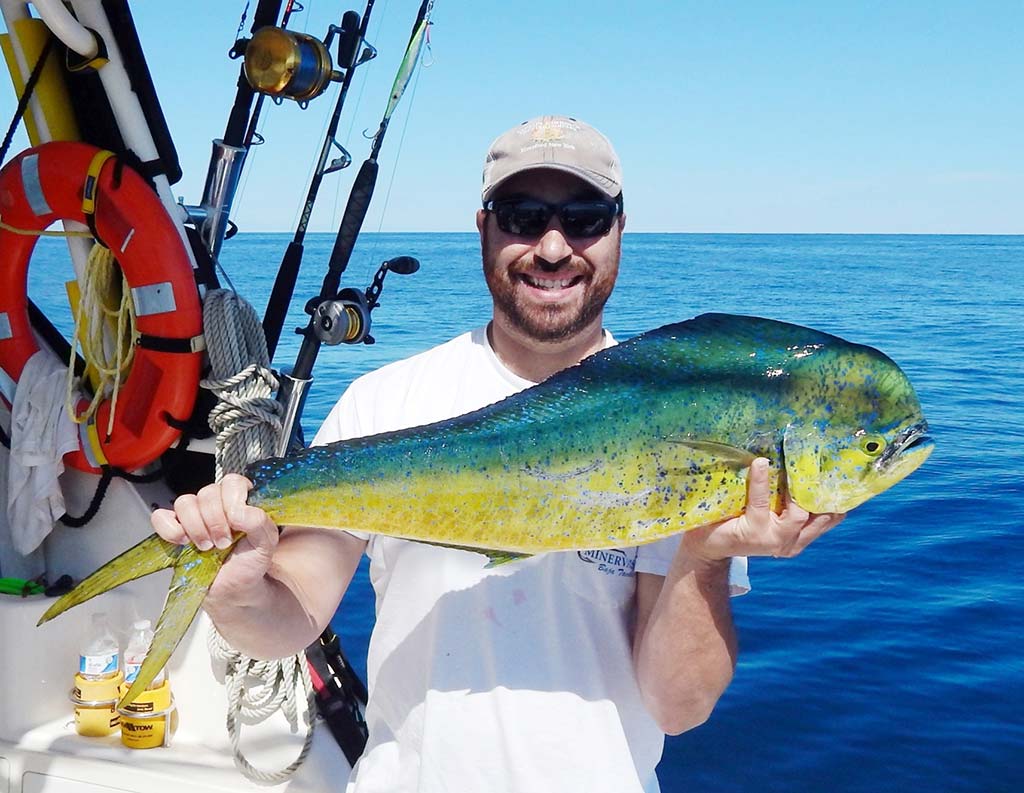 If you’re a conventional fan like me and choose revolving spool outfits over spinners, a variety of hardware from Penn, Avet, Accurate, Shimano, Daiwa and others should appeal to your taste. I have been employing a pair of Avet SX5.3 G2 reels for the majority of my summertime pelagic fishing efforts the past few seasons. These are attached to either 6.5-foot fast action Penn Rampage or Shakespeare Tiger-Lite jigging rods, and spooled with high-visibility 30-pound Western Filament TUF-Line. A 20-foot/40-pound mono wind-on leader tied from either Berkley Pro-Spec or Hi-Seas Quattro Plus via an up/down Reverse Albright knot finishes off the terminal end. The places that you’ll be likely to locate the summer tenants will be around the inlets, jetty areas, around the perimeter of baitfish schools along the beach, under flotsam, under sea buoys and crab/lobster floats and high-flyers, and near any inshore wrecks or artificial reef areas. Look for any surface action, slicks, bird activity, feeding whales or porpoises and check your echo sounder for any life. Remember, for the summertime visitors to stay comfy and frequent a general area, water temperatures of 70 and above are usually a good sign, so use your vessel’s sea temp gauge to find the right water. If you don’t have one, get one to improve your situational awareness! 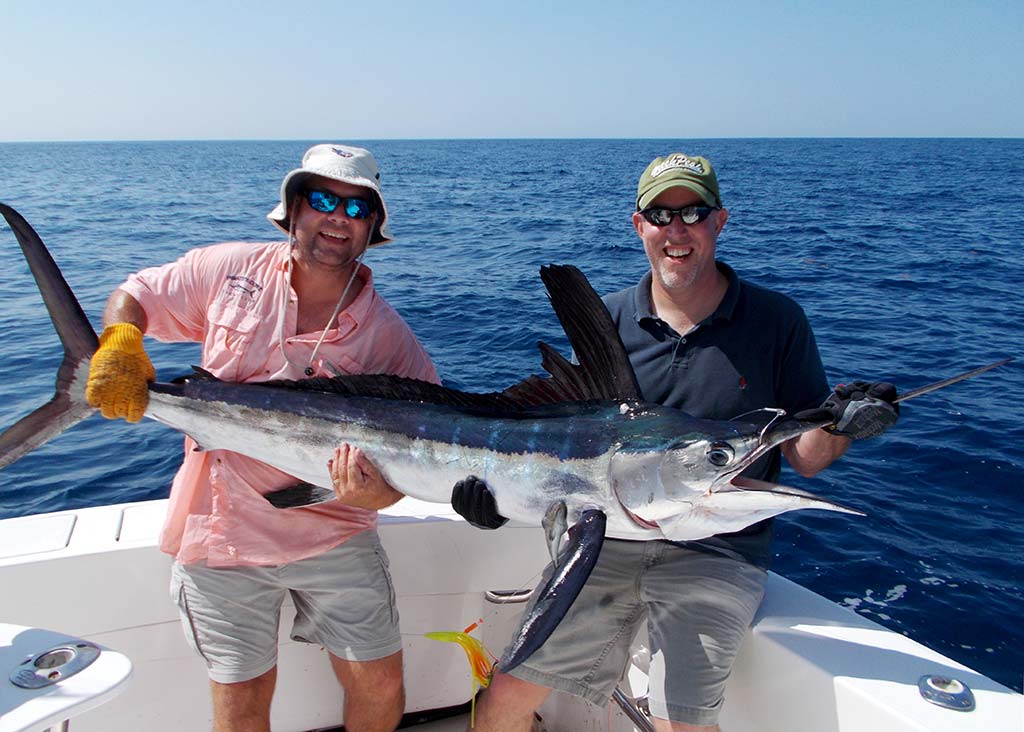 When chasing down the last of the near-offshore and bluewater summertime pelagics before they turn south and head for home, the gear that you were using to bring them to boatside in the prior months should still work in September. When working offshore waters, finding the right surface sea temps and temperature breaks is the golden rule. I did a trip last September for yellowfin tuna and needed to truck 60+ miles to get the 73-74 degree water temps that I suspected would hold the fish after a series of coastal storms. The latest intel of their whereabouts was over a week old and I was on my own, relying on my interpretation of the latest Terrafin SST chart for the best place to start. Fortunately we choose the right neighborhood, teamed up with a few cooperative neighboring boats via the VHF to get local knowledge on what colors they were hitting and proceeded to put four 50 to 60-pound yellowfin tuna into the fishbox, trolling them up on Sterling Wide Tracker and conventional green machine spreader bars. If there’s any chance to get out in between coastal storms in September, do what you have to do to make the trip safely and with enough crew onboard to help out – you’ve got to be in it to win it. You never know if that trip to get one last shot at summertime pelagics will be your last, based on the unwritten pelagic migration calendar.