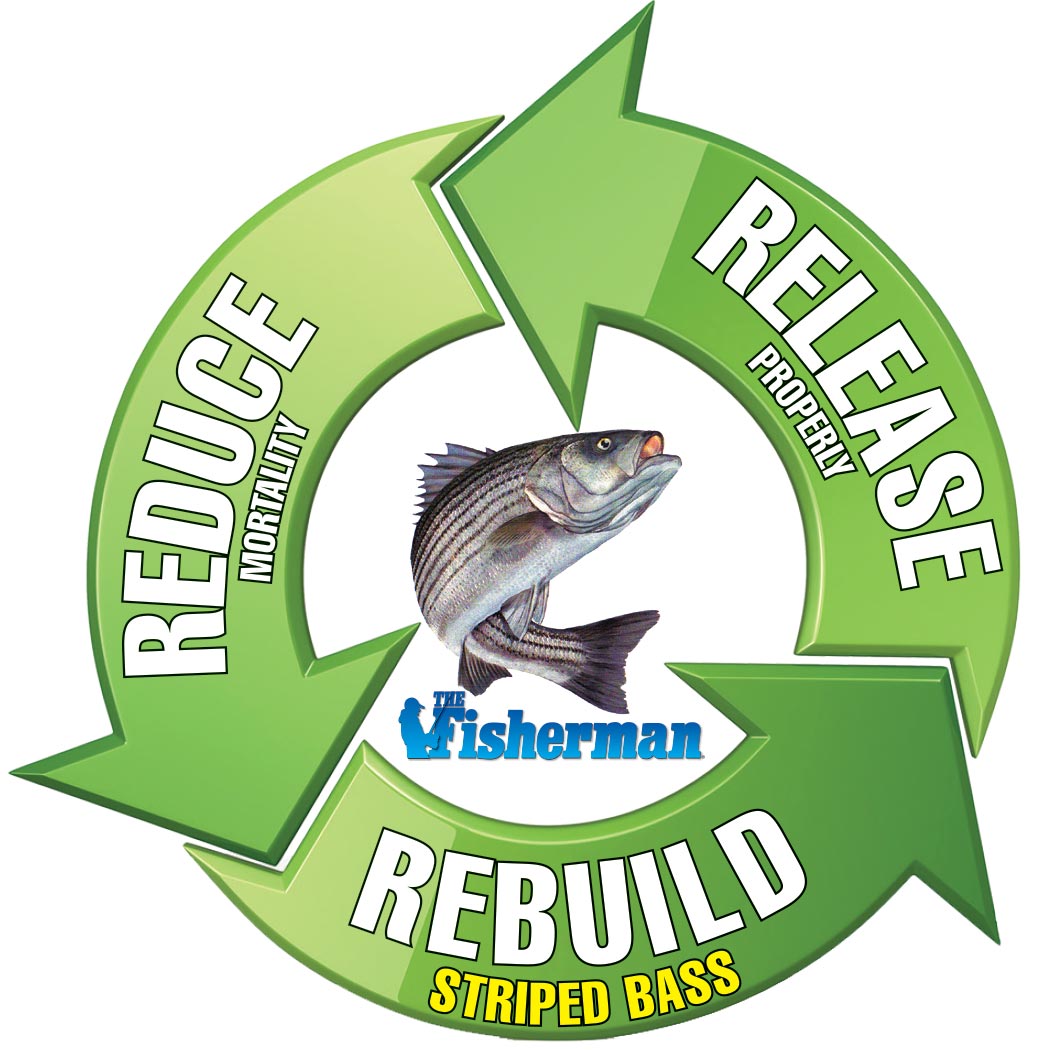 There are currently three 46-inch jumbo stripers swimming around somewhere in the North Atlantic with MiniPSAT devices affixed to their shoulders.

Regrettably, unlike our success in the lower Hudson back in May of 2019 with the fish we named Liberty and Freedom, we were unable to find suitable candidates in New York Harbor in our quest to ensure that two post-spawn Hudson River stripers were tracked via high-tech satellite tags. As has been the mantra going back to March, COVID-19 may have knocked us down, but it didn’t knock us out!

With the body of big, migratory stripers having mostly moved on and out of NY Bight in mid-June, the Northeast Striped Bass Study team reconvened by phone to develop a new plan.  With hopes of securing four or five Wildlife Computers MiniPSAT devices through Gray FishTag Research heading into 2020, we were thrilled to at least get three during the coronavirus pandemic for late spring and early summer deployment (with hopes of more to come by fall).

But heading into the Independence Day weekend, the immediate task became where to find a third qualified candidate to carry the MiniPSAT device for four months of tracking; then came the news from Montauk.  “Capt. John Paduano and Savio Mizzi have both caught many big fish snap-jigging bucktails drifting in the rips off the Point over the past couple of weeks,” said The Fisherman’s senior editor, Fred Golofaro, noting “John had a 56-inch fish that calculated out at 71.5 pounds, and Savio had one of about 60 pounds.” With the window open on big stripers from Montauk to Block Island in July, a new plan came to fruition and the tagging team headed east.

Could these be the same fish we saw earlier this season off the Jersey Coast?  Are they Chesapeake fish, or Hudson?  “There are still a lot of unknowns about these big fish,” said Bill Dobbelaer, President of Gray Fishtag Research, reminding us all of the travels made by Liberty and Freedom in 2019, to the canyons and back.  “But if there’s big fish in a place like Block Island or the rips off Montauk, let’s do it,” he added.

While most boats had been using live bait like eels and legal-size porgies for the big fish, Golofaro knew that bucktails have also been taking a lot of cows. “We were out on the water at first light and were catching some small fish into the slot when Savio connected with the right fish,” he said, recounting the deployment operation on July 3.

“We were looking for a fish over 45 inches and this one measured out at 46 so we decided to go with her rather than hold out for an even bigger fish,” Golofaro added.  The fish was lightly hooked in the lip, a perfect candidate for carrying around a tracking device for the next five months.   “We moved around between Great Eastern, the Porgy Hump and Pollock Rip, where Savio hooked Independence,” he said of the aptly named holiday weekend striper, the fifth striped bass since 2019 to carry a Gray FishTag Research tracking device.

Sometime later this fall, we hope to learn more about three fish currently deployed with MiniPSAT devices; and our fingers are crossed that these three tags end up being found just as the other two were back in 2019.

On May 21, 2019, our Northeast Striped Bass Study team consisting of staff from The Fisherman, Navionics and Gray FishTag Research headed out on the lower Hudson aboard Rocket Charters out of Manhattan in the morning, with an afternoon on-water transfer to Fin Chasers Charters out of New Jersey.  The double shift of fishing within sight of the Statue of Liberty resulted in a pair of SAT-tagged fish, a 34-inch striper named Liberty and a 42-incher named Freedom.

The MiniPSAT tags used in the Northeast Striped Bass Study incorporate light-based geolocation for tracking, time-at-depth histograms for measuring diving behavior, and a profile of depth and temperature.  The information – light-based geolocation, time-at-depth histograms and profile of depth and temperature – is all stored inside the waterproof tag’s circuitry.  There are just two ways to extract that stored data on tracking, diving behavior and temperature profiles of tagged fish, by the physical tag surfacing and “pinging” info to the orbiting Argos satellite in space (thinking of how the shark “pings” make national headlines every year), and by physically retrieving the tags.

In the case of our current striped bass subjects, the tags are programmed with a charge to “disengage” after 4 months versus 5 months as they were in last year’s study, again based on questions related to the COVID-19 effects on our timing.  In 2019, Liberty’s tag came undone earlier than expected, washing up along Sagamore Beach, MA where a woman walking the shoreline stumbled upon it.  Using the information written on the side of the tag itself, she was able to contact Gray FishTag Research, shipping the tag directly to the study team in Florida.  Then on October 22, just 4 days after popping free from Freedom, the second Wildlife Computer MiniPAT device washed up along the beaches of Asbury Park.

Surprisingly, Liberty and Freedom didn’t behave as one might expect stripers to behave.  Per the information collected in Liberty’s tag, after being caught in the lower Hudson on May 21, she made a quick trip down the Jersey Shore before heading northeast along the south shore of Long Island around Memorial Day. She then meandered in a south/southeasterly direction, spending most of June in parts of Ryan, Nantucket and Clipper canyons, cruising mostly in the 40- to 80-foot depths.

Freedom, as reported in our January edition, left the Hudson heading in a southeast direction above the Hudson Shelf Valley, making it to the westernmost tip of the Hudson Canyon just inside Babylon Valley – a distance of roughly 100 miles – by Memorial Day weekend. The information collected inside that Wildlife Computers MiniPSAT tag revealed that Freedom spent the next month within about 20 nautical miles of that point, eventually zigzagging her way through Block Canyon out towards Veatch Canyon before heading north towards Nantucket Shoals in early July.

“There is no question the tag stayed on the fish for duration,” Dobbelaer said later.  The beauty of these high-tech tags is that based on the tracking, diving and temperature profiles contained with the tag, the idea that a larger predator like a white shark was dispelled by the actual scientific data.

And then there were three.  Based on the disengagement charge working how and when it’s supposed to, we should expect to get the first “pings” from Cora and Rona by the end of September, with the Argos satellites hopefully relaying information to Gray FishTag Research scientists from Independence sometime in October.  Each of the three fish also carries a corresponding green streamer or spaghetti tag so that even once the four-month tracking period is done, we still might be able to learn more about these fish and their destinations in years to come.

The 2020 Northeast Striped Bass study looked different than originally planned thanks to the COVID-19 pandemic.  Rather than a handful of lower Hudson River post-spawn fish, our belief is that at least two of the tagged fish are Chesapeake post-spawn fish; the third and final striper from Montauk, Independence, is anyone’s guess.  In addition to the satellite tags deployed, the team placed another two dozen Gray FishTag Research spaghetti tags in fish from 18 inches in length to 46 inches.

Ultimately, all data collected by Gray FishTag Research is open access and available to the public when requested in writing.  For the Northeast Striped Bass Study team, which includes all of our sponsors and investors, the ultimate goal is to continuing tagging as many striped bass as possible.  As for the satellite tags, the mantra “bigger is better” certainly applies, whether those fish are migrating north and east in June and July, or south and west come September and October.

“We are still looking at a fall run of stripers,” said Roxanne Willmer from Gray FishTag Research, “we just need to get together as a team to see what those details look like.”  Willmer said several blue marlin studies in Cabo San Lucas and Costa Rica are up in the air at this point due to the COVID-19 pandemic, but the Northeast Striped Bass Study for 2020 continues.

“We have additional SAT tags here at Gray dedicated to the Northeast Striped Bass Study, and we certainly don’t want to stop at just the first three tags,” she said in July.  With that, Northeast Striped Bass Study members are taking a look at another 4-month study window later this year to perhaps carry the migratory tracking efforts on jumbo stripers into the winter.

There is of course risk involved.  In 2019, the tags were programmed to stay on for 5 months, yet Liberty’s tag released approximately two months early while Freedom essentially carried to term.  There are any number of obstacles along the way which could keep Cora, Rona and Independence from retaining their MiniPSAT devices the full 4 months like rolling into a big boulder in Block Island Sound, getting caught up in a dragger’s net or even being eaten by a large predator.

But so long as those tags perform as designed, floating to the surface to “ping” the Argos satellite – or perhaps again being discovered along a stretch of beach between Massachusetts and the Jersey Shore – our hope springs eternal. 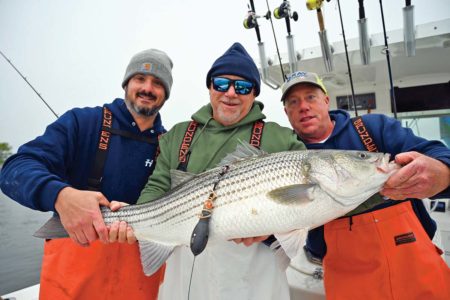 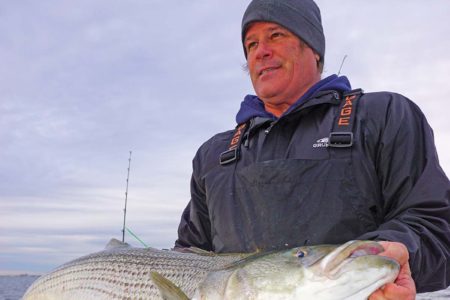