My goal was to learn the deepwater rips at Montauk and fish them effectively by casting artificial lures. I didn’t want to use bait or troll. To me, this is a more satisfying and challenging way to catch bass consistently—especially the big ones that are known to frequent the area.

Now, I’d been plugging and fly fishing the shallower areas of Montauk for three decades and knew these areas very well, but hadn’t fished the deepwater areas nearly as much. Usually, I’d use diamond jigs in the rips when I did and caught with the occasional big one, but this lure, which at times was surefire, just didn’t offer me the consistency I was looking for. Besides that, I just didn’t know the terrain as well I would have liked.

How would I achieve this goal? No one I knew who fished the rips wanted to experiment or spend time learning new water and new methods. They were too comfortable with their routines and found it difficult to leave their comfort zone, even when those big fish were in the area.

Then I started hearing about this guy who was catching lots of stripers, and a lot of big stripers on bucktail jigs. He’d been doing this for over 30 years by fishing bucktails in deep water with light baitcasting tackle from his boat in the Montauk rips. My problem was how could I get this guy, who I found out was Capt. Savio Mizzi, to teach me? Striper fishing has a history of great anglers revealing their secrets to no one. There are even stories about “sharpies” demanding their wives burn their fishing logs after they die—it’s been that extreme!

Well, it turns out a good friend of mine, knew Savio and was friends with him on Facebook. I discovered that Savio was a successful artist, was originally from Malta, and was, as I might have suspected, obsessed with fishing.  Getting together with him turned out to be surprisingly easy. Through my connection, I ended up chatting with Savio and he told me he’d take me fishing, show me the rips, and teach me everything about his technique—it was that easy. We began fishing together and he shared how he fishes bucktails and where he did it. Let me share with you what I learned.

Savio mainly uses medium-heavy baitcasting rods designed for freshwater bass, and matching reels with good drags. The reels are essentially a large capacity largemouth reel designed for heavy freshwater or light saltwater duty. He spools them with 15- or 20-pound braid. He’ll Double Uni Knot a 5-foot leader of 40- or 50-pound mono or fluro to the braid and tie his bucktail jig to the other end. “More action is key,” says Savio so choosing a soft material is ideal.

He prefers ball-headed jigs (bucktails) such as S&S Big Eye Bucktails or Premium Bucktails because they offer a fast sink rate. His favorite sizes are 1/2, 3/4, 1, 1-1/2, and 2 ounces. He mainly uses 1 and 1-1/2 ounces for most of his bass fishing which is usually in 30- to 70-feet of water with current speeds varying from very light to extremely fast. He’ll usually attach a 5- or 6-inch soft plastic curly tail to the lure, or when fishing in heavy current, a 5-inch strip of artificial “rind,” reasoning that the thin rind cuts through the current more effectively. Although he will sometimes use different colors or color combinations, he mainly stays with white for both bucktail and trailer.

His total outfit is light in weight, and it fishes and “feels” light in your hands when fishing, and you can fish it all day without tiring. And let me tell you, you can land big bass and bluefish with this set up all day long if you are lucky enough to run into that kind of fishing.

The braided line has very little resistance to the current and helps that light bucktail get down and stay near the bottom easily. A lighter jig has more action, appears livelier, therefore triggering more strikes. This makes the difference between getting strikes and not; especially where big bass are concerned.

Savio has proven how effective and practical this technique is by the number of large bass and blues he has caught year after year for the past 30 years doing it this way. I can attest to its incredible effectiveness after fishing like this for only one season.

We fished the fabled Montauk rips, Pollock, Great Eastern, the Elbow, North Rips, Endeavor, Shagwong, and Outer Shagwong. We commonly fished the edges, the drops, and ledges, and fished directly over the rips at many points. No great secrets here. We caught fish sometimes when we saw them on the finder and sometimes when we didn’t. We’d get fish on both tides and at different tidal stages and current velocities. It depended on the day as to when the fish would hit. Savio did prefer to fish the periods when the tide slowed, saying it was easiest to fish the bucktail then, and that you could be sure it was near the bottom more consistently, and therefore be in the fish’s strike zone more frequently. Let me emphasize how being near the bottom is important. Savio says it helps to be near the bottom, but not necessarily on it. Fish will, of course, take a lure at nose level, but will rise up some for the lure as well. They won’t go too far though. Sometimes they’re suspended off the bottom, so close is always a good choice.

He also prefers low light periods. These include early morning, cloudy days, and sundown but it’s possible to catch fish at all hours of the day. His philosophy is, “You can’t catch fish if you aren’t fishing.” Savio has a reputation for putting in long days, but admits he’s shortened them some over the last couple of years. Besides Montauk, I also fished around Block Island with him.

Savio’s fishing technique is pretty basic. He lets his boat drift freely with the current, drops his bucktail off the stern, or makes a short cast behind or somewhat to the side, then lets it sink to the bottom in free-spool, using an “educated” thumb. When you feel the lure hit bottom, or the line stops coming off the spool or rod tip, or the line goes suddenly slack (this may only happen for a split second while drifting in a strong tide before it continues moving), you’re on the bottom. Put the reel in gear. With slack out of your line and rod tip low to the water, he jerks the tip up sharply. He’ll then reel slack as he drops the rod tip, following the lure down on a tight line to where the tip is again low, and then he’ll repeat this sharp lift, reel, and drop. He’ll repeat this sequence a couple or a few more times until he decides the lure is too far off the bottom and then he’ll drop the bucktail completely back down to the bottom once again. He then repeats the same sequence all over again. When the line’s angle to the water gets too “flat” (the faster the tide the sooner this happens), he’ll reel in and start the process all over again. This is mostly how he fishes. Sometimes vary the cadence of retrieve, at times breaking it up, and will vary the speed as well. The changes can be subtle, and he says that experience will teach you.

The strike is usually just a tap, or the line suddenly stops on the drop where it shouldn’t, or sometimes you “lose touch” with the lure. It will almost always happen on the drop. At times the fish is just “on” when you go into the next lift. Even the largest stripers hit this subtle way at times. And don’t be fooled, you can catch some of the biggest stripers that swim with this method.

When you get a hit, set the hook hard and fast. Maybe strike more than once, then hang on. If the fish runs, let it run. That will help tire it out. Smaller fish you can just “pump in” with pressure. You’d be surprised at the amount of force on a fish with this light tackle. If you haven’t fished gear like this for big bass and bluefish it will surprise you at just how effective it is.

After fishing with Savio, I saw how important thin braided line, light bucktails, trailers, type of leader, being near the bottom, and strike triggering action of the lure were with this fishing. It took some experience to gain confidence that my bucktail movement was good, that I was consistently near the bottom, which was often 45 to 65 feet down, and that I could catch fish well with this method. Let me again emphasize that through most of the retrieve you have to be near the bottom and you won’t feel it except on the first drop, or when you decide to drop the lure back down to the bottom again. This confidence is incredibly important. What helps you ultimately, of course, is when you start consistently hooking fish.

I didn’t do so well during the first few weeks. I caught some fish, but nothing big. I had to concentrate, practice, and learn. Eventually, I started getting consistent and the bigger fish started coming.  I also did learn the Montauk and Block Island rips better as I fished them, which was one of my goals. Seven weeks into my bucktail foray I caught a 52-pounder off Block Island while fishing with Capt. Pete Douma. That fish took almost all the line off my small baitcasting reel on its first run. A little later I got a 38-pounder. My confidence was at a near-high and my goal was reached. It’s downright fun to fish this way. 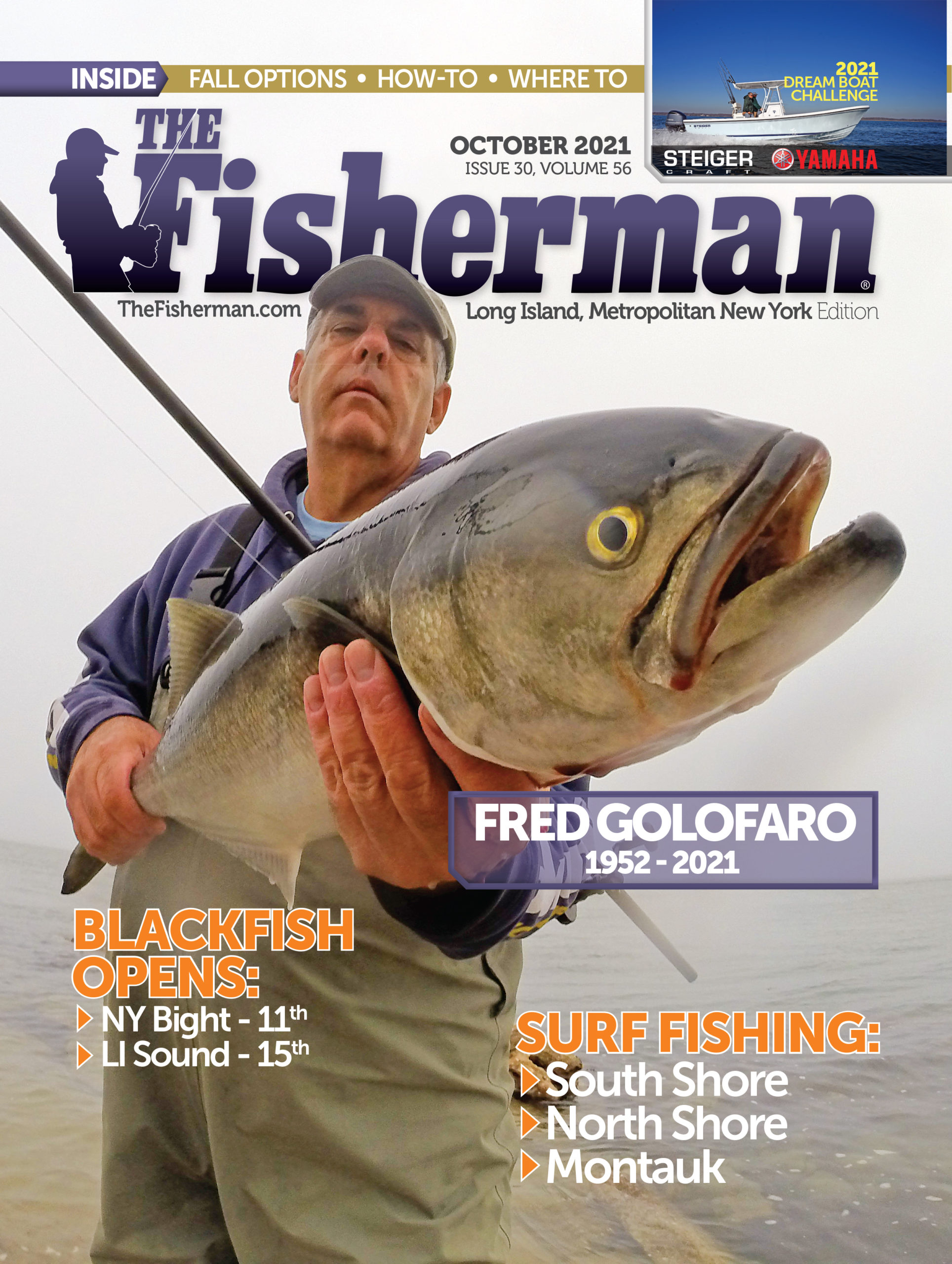