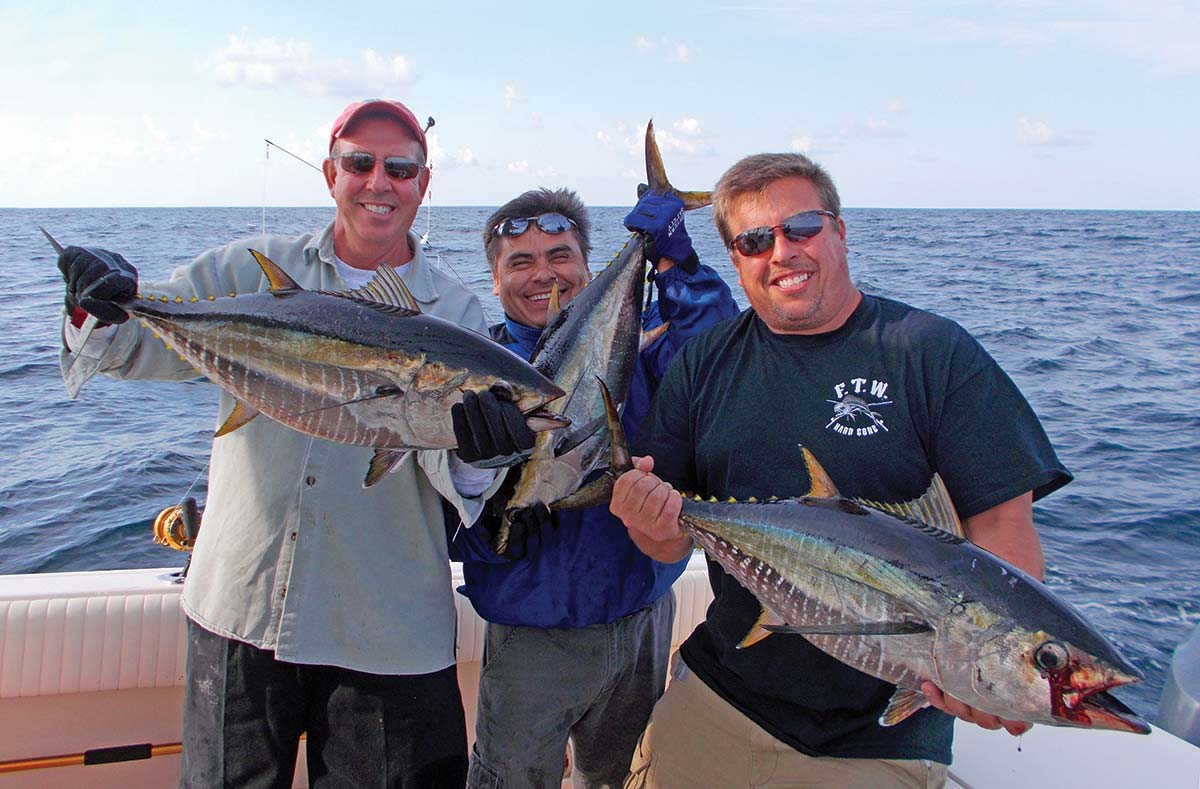 “Sometimes the ‘old school’ approach still has its place in the modern next-gen world.”

I’ve owned 16 boats over my 40+ years of being a charter boat captain and only one of them, my used Phoenix 27 Express, was equipped with outriggers from the get-go; and these were promptly removed and sold.  I’ve also done “away trips” on hundreds of charter customers’ boats, both with and without ‘riggers. During my decades as a small boat (21 to 27 feet in length) ocean operator, my personal experiences have proven to me that the minuses of outriggers outweigh the plusses for my type of multi-faceted inshore and near offshore sportfishing.

Sometimes the “old school” approach still has its place in the modern next-gen world. With that being said, how can someone with a modest-sized seaworthy craft put four to seven rods in the flight pattern tangle-free when trolling near offshore waters? I can definitely share some knowledge on this topic, so let’s get right into it.

The science of trolling is fairly straightforward. Your vessel produces a variety of mechanical noises from its engine; a bubble trail from the spinning prop as it chews up the seas aft of your craft; plus the splashing of the hull as it slides through offshore seas at displacement speeds. All this combines to generate a significant white water wake, acting like a big self-powered teaser.

Pelagic species like tuna, billfish, mahis, wahoo and others migrate from faraway waters and when they pass through our area, are typically scouting for favorable forage conditions at the usual hotspots like wrecks, rock piles, fathom curves, canyon/shelf edges, weed lines, current eddies, near whale and porpoise activity, water color changes and temperature breaks. Being successful in near offshore or distant canyon waters is all about locating fish-aggregating structure, and knowing what to do when you find it. Trolling at speeds in the 6- to 9-knot range in near offshore and canyon blue waters will attract a variety of baitfish into your wake, first out of curiosity to the sound and sight of your vessel and then leveraging the opportunity to hide in the white water, especially if predator fish are in the neighborhood.

Since sound travels five times faster underwater than it does in the air, once baitfish and predators have found the source of the sound and are drawn in to investigate, the boat wake offers a visual stimuli, with both shelter and camouflage for baitfish to slip in and out of the bubbles and shadows. This helps them avoid being prey for hungry pelagics, who are also attracted by the sound and sight of a boat’s trolling wake as a potential food source. I have observed pods and schools of baitfish cavort, jump and play in the wake on numerous occasions, only to be suddenly and unceremoniously mugged by the surface explosion from a hungry tuna, dorado, mako or billfish. 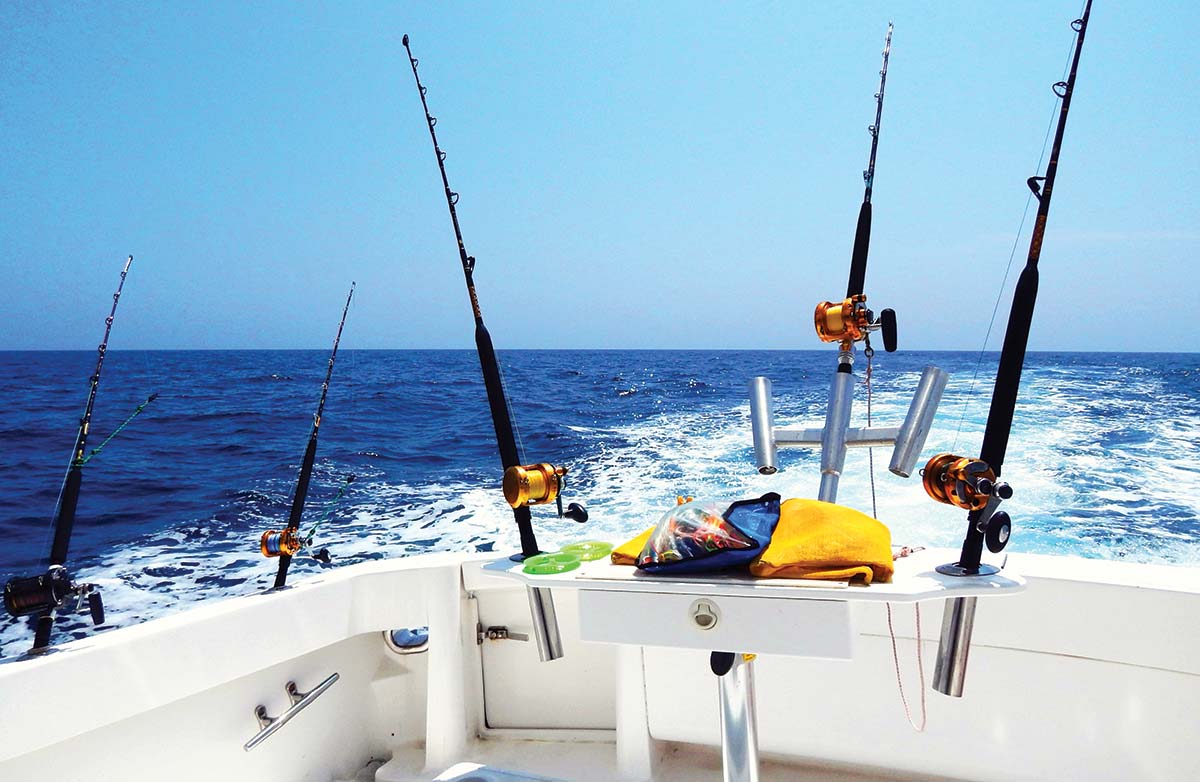 Outriggers have been around in American sportfishing circles for almost a century and are usually considered to be requisite gear on any serious bluewater battlewagon. Small to midsized boat operators from 21 to 30 feet in length have made good use of them too, but with certain caveats.

On the positive side, outriggers perform a number of useful functions: 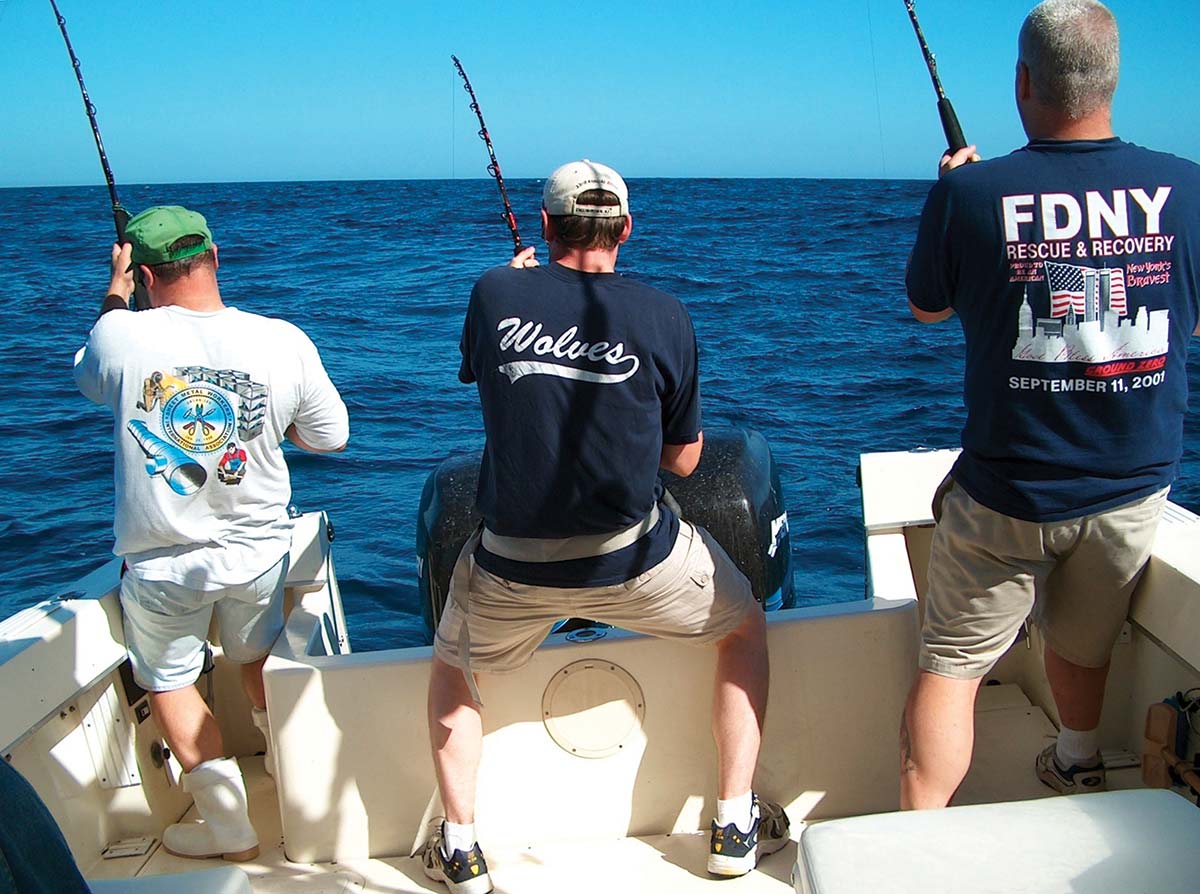 On the flip side, outriggers can also create a number of challenges and/or potential problems:

Considering the plusses and the minuses, you can appreciate that outriggers can be extremely useful in some situations and challenging in others. When setting up a downsized sport fishing vessel, it comes down to a personal choice on how you fish and want to tailor the personality of your ride. 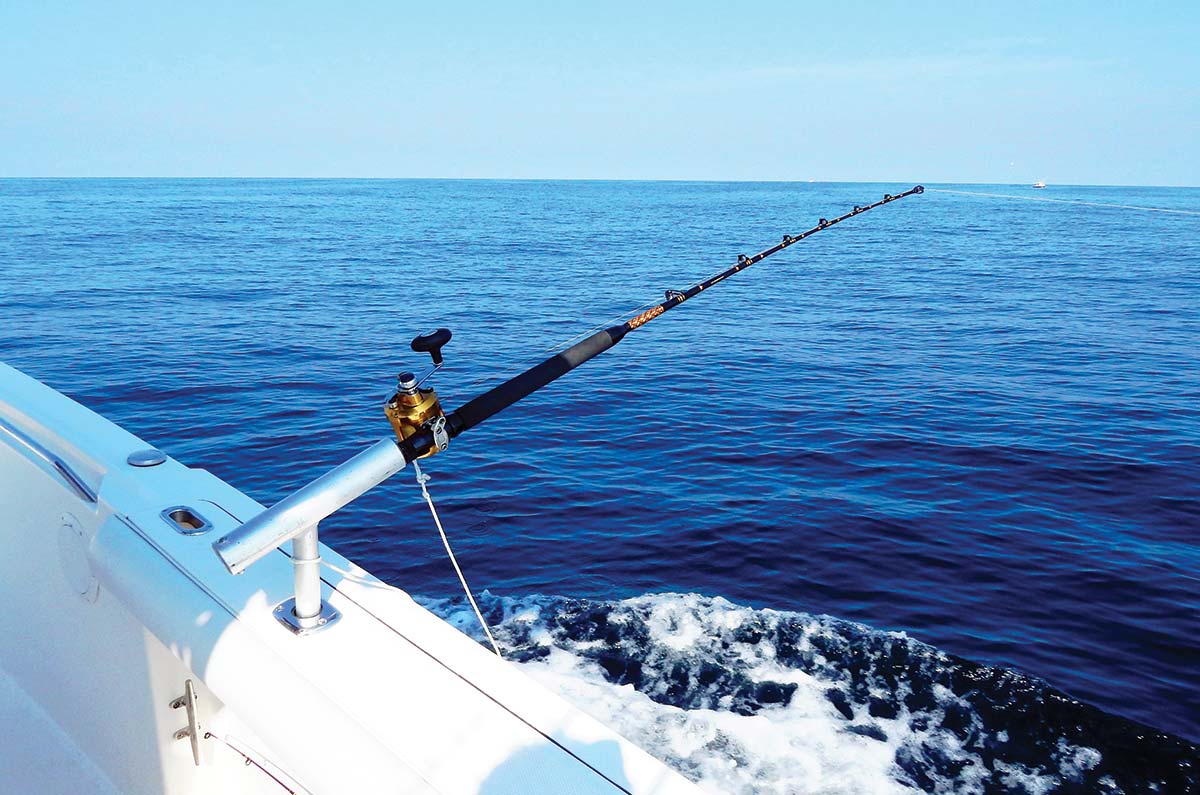 Transforming your 21- to 27-footer into an efficient trolling machine will require some specific additions, especially in the form of flush-mount and vertical rodholders. Most boats in this size range do not come equipped from the factory with enough standard rodholders. Experience has taught me that the bare bones minimum setup for a successful trolling platform requires three flush-mount gunwale rodholders per side, with an equal number of vertical rodholders set in a leaning post rocket launcher, hardtop or T-Top rocket launcher and/or additional vertical rodholders on the hardtop tower legs. If you can install a few additional vertical rodholders along the sides of the center console, or across the transom in the form of either flush mount units in the transom bulkhead cap or racks across the outboard side of the transom well, these will always be useful. While 95% of the small boats that meet our size criteria would probably have minimal difficulties mounting six flush rodholders, the vertical rodholder part of the equation requires some sort of a fixed overhead attachment source, typically in the form of a hardtop, half-tower, T-Top or radar arch.

The importance of this rodholder layout cannot be overstated. There’s not a lot of excess room on a small boat and usable cockpit and storage space is at a premium. If you are trolling six or seven rods and two of them get hit, what do you do with the others? These need to get reeled in ASAP and stowed up and out of the way, so that the anglers can fight the fish totally unencumbered without tripping over or stepping on and breaking some very expensive offshore tackle…a place for everything and everything in its place! 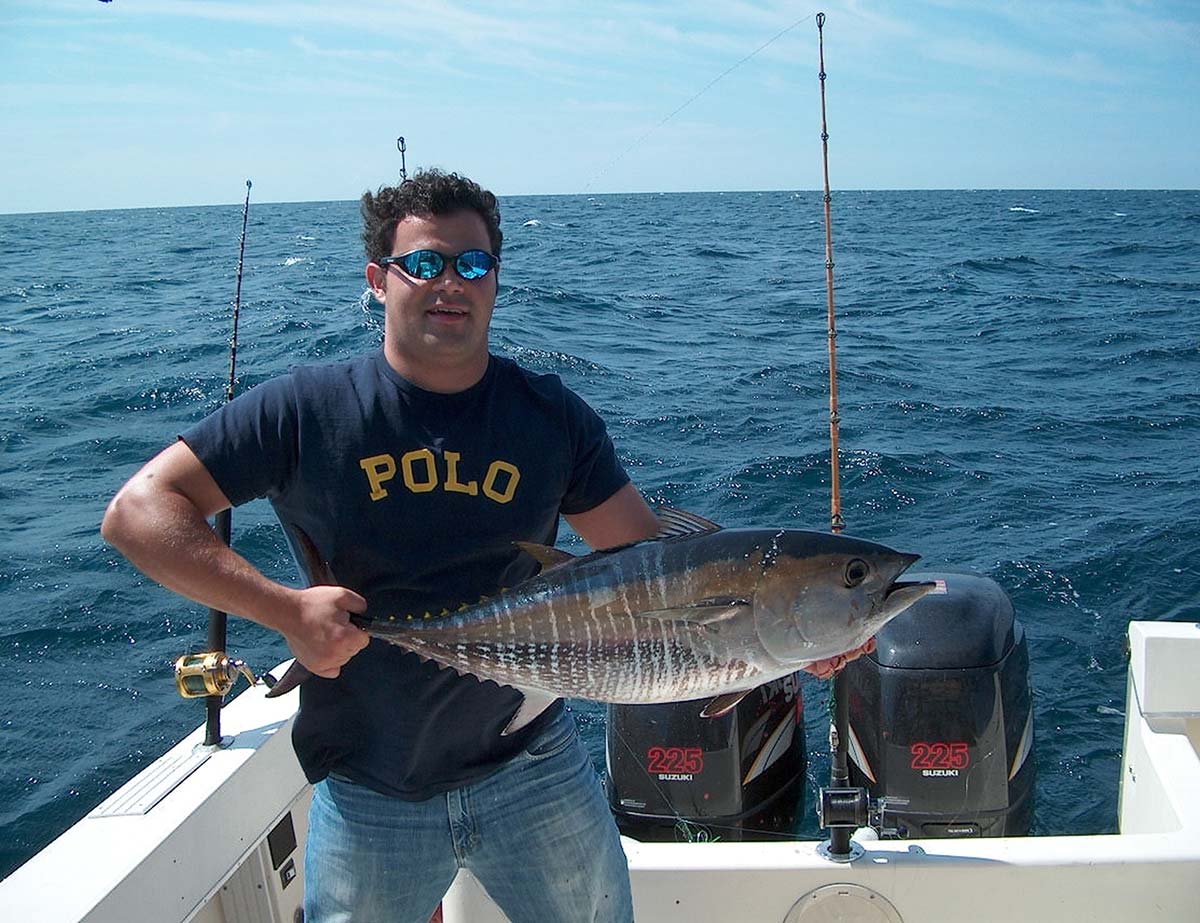 One of my specialties as a small boat offshore captain is understanding the science of how to troll seven rods without using outriggers and while avoiding tangles in most types of sea and wind conditions. Although we’ll explore this setup in more detail in the following section, I can accomplish this task through the use of three affordable accessories. One of these is a pair of 0-degree angle rodholders, which I install on either side in the forward-most position of the gunwale covering boards. Another requisite accessory is an assortment of flatline clips like the Aftco Roller Trollers or Rupp Zip Clips, attached to short halyards in 12- to 18-inch lengths.

The final part of the equation is employing a set of rodriggers (a.k.a. outrodders), which go by a variety of different trade names (currently manufactured by Taco, Smith, Tigress, Boat Outfitters among others and offered historically by Reliable Gaff and Canyon Products) but perform the same function. These rodriggers are manufactured from stainless steel, chrome-over-brass or anodized aluminum tubing and are designed to increase the horizontal reach of your trolling baits. They accomplish this task by using the length of the rod to effectively spread the lures or baits apart laterally on either side of your vessel’s hull, similar to how an outrigger would function, but without the drop-back of fishing line after the strike. The rodriggers require that you employ a through-bolted, gunwale-mount rodholder as the base and typically feature a short length of safety line that is attached to the harness lug of your reel on one end and to a cleat on the opposite end to avoid contributing any of your tackle involuntarily to the deep. I have employed rodriggers on my boats for over three decades and will tell you that they work just as advertised. Even though I have a few extra pairs of these as backups in my travel kit, I still use my original aluminum tube Reliable Gaff Rodriggers purchased in the early 1990s that have caught many hundreds of tuna, dorado, wahoo, white marlin and other near offshore and bluewater pelagics. 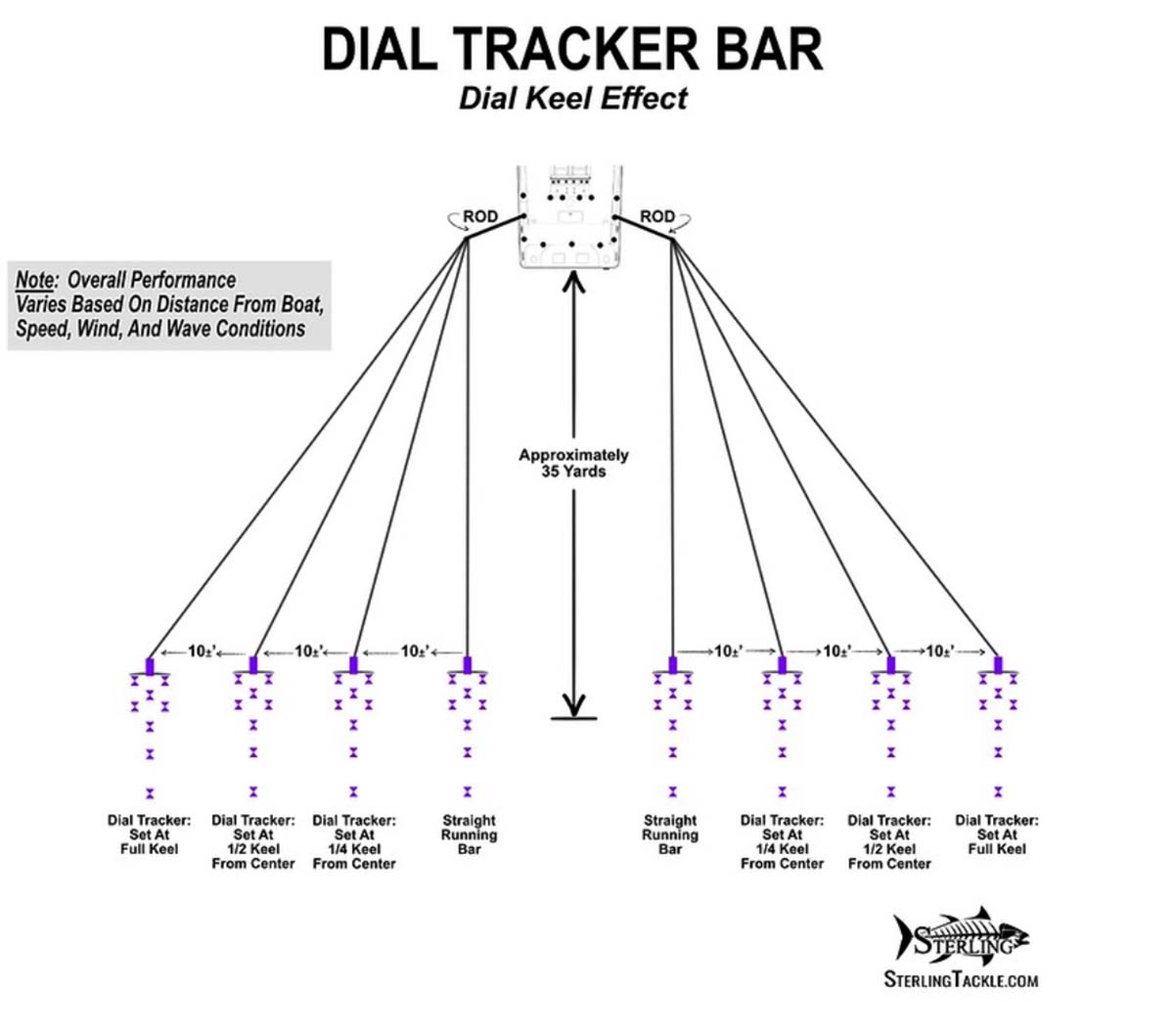 One type of trolling lure that fits right into the wheelhouse of the small boat or a near offshore operator is the squid bar, which comes in many sizes, types and flavors. When trying to bring up predators from the thermocline or deeper parts of the offshore water column, success is all about how much commotion you can make to attract predators into your surface spread. An 18-inch bar with 10 to 12 shell squids/Green Machines, or a 36-inch bar loaded with 18 to 20 of these lures will manufacture a lot of surface noise. Multiply this by having a quartet of these noisemakers in your boat’s white water and you are in business. However, running four straight-running bars aft of a narrow beam sportfisher is not immune to getting some occasional tangles. Daisy chains are easier to stow, handle and deploy compared to squid bars, but generate proportionally less surface noise. To avoid conflicts with the somewhat costly and wide-profile squid bars, some folks will run the daisy chains short on flatline clips and the squid bars further back, which keeps everything in harmonious balance.

The introduction of adjustable Side Trackers by Chatter Lures, Wide Trackers by Sterling Tackle and Directional Bars by Hogy Lures have been a game changer for small boat trolling, since operators can now run four bars relatively tangle-free. The straight-tracking bars will run directly off the rod tips in the second or third wake, while the side/wide trackers will run out at a 30- to 40-degree angle in totally clear water in front of the wake. Sterling recently introduced a next-gen version of their Wide Tracker concept with their new Dial Tracker, which allows the user to dial in four modes of tracking ranging from straight, quarter-keel, half-keel or full keel operation. The adjustable dial keel not only goes full port or full starboard, but also can be locked in to stop anywhere in between. Given favorable wind and sea conditions, small boat operators might find that they can troll five bars on a given day, which will make a heck of a racket in the wake.

Although the possibilities are almost endless, I’ll share my OG (original gangsta) and next-gen seven-rod trolling patterns for my current ride, an EdgeWater 228 CC. 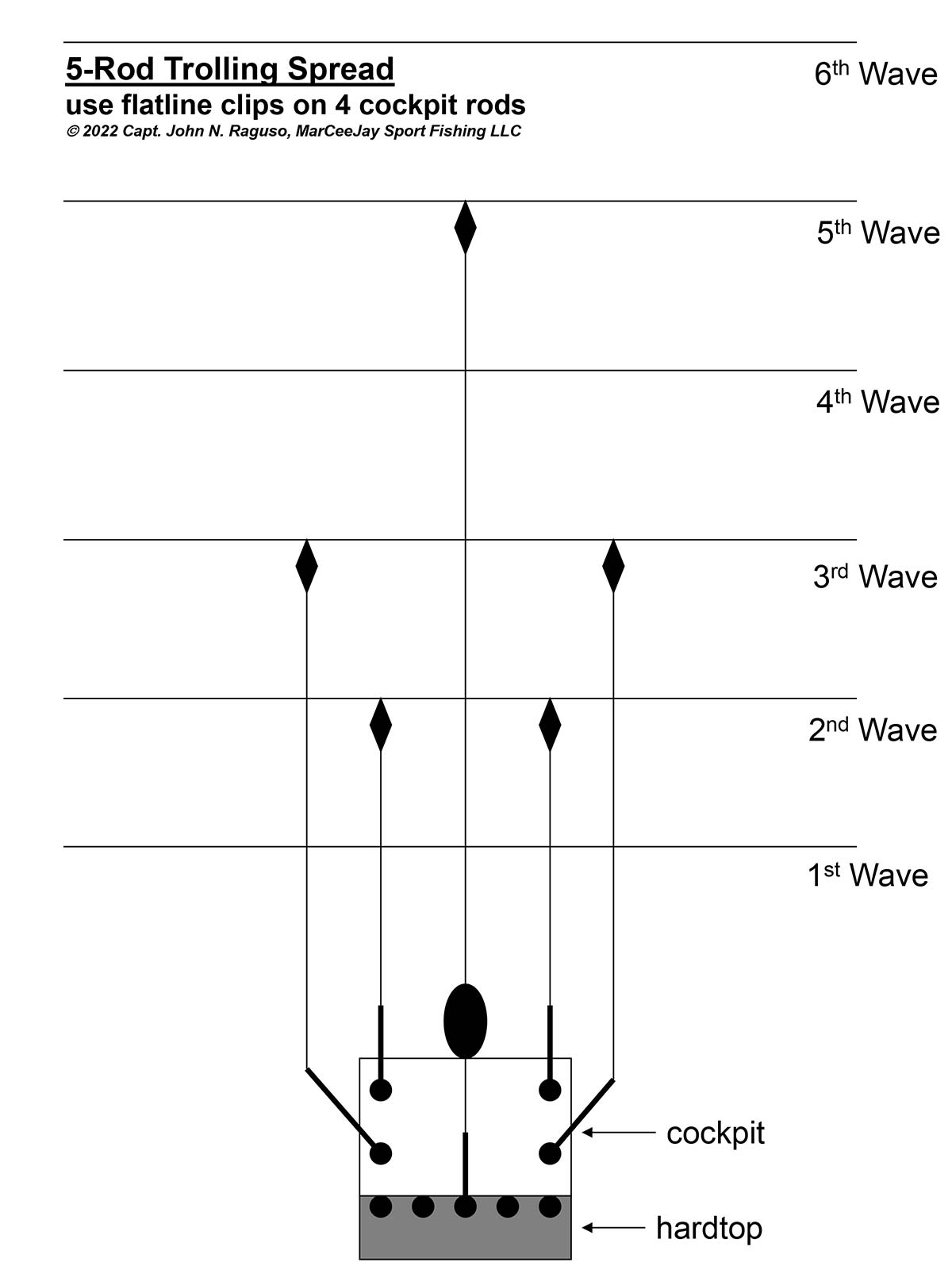 Forward 0-degree rodholders equipped with rodriggers in fifth wave: Squid or green machine/Psychobead daisy chains, single Psychobead lures or Joe Shute/ballyhoo combos. Whatever lure is deployed, it is attached to a medium sized bird teaser to easily identify its location in the wake to track it and avoid tangles.

T-Top rocket launcher: Large Yozuri Jap bird with rainbow Psychobead. I have diligently deployed this combo successfully for the better part of 30 years and this position can often get 90% of the trip’s action and is placed 100 to 125 yards aft of the transom. 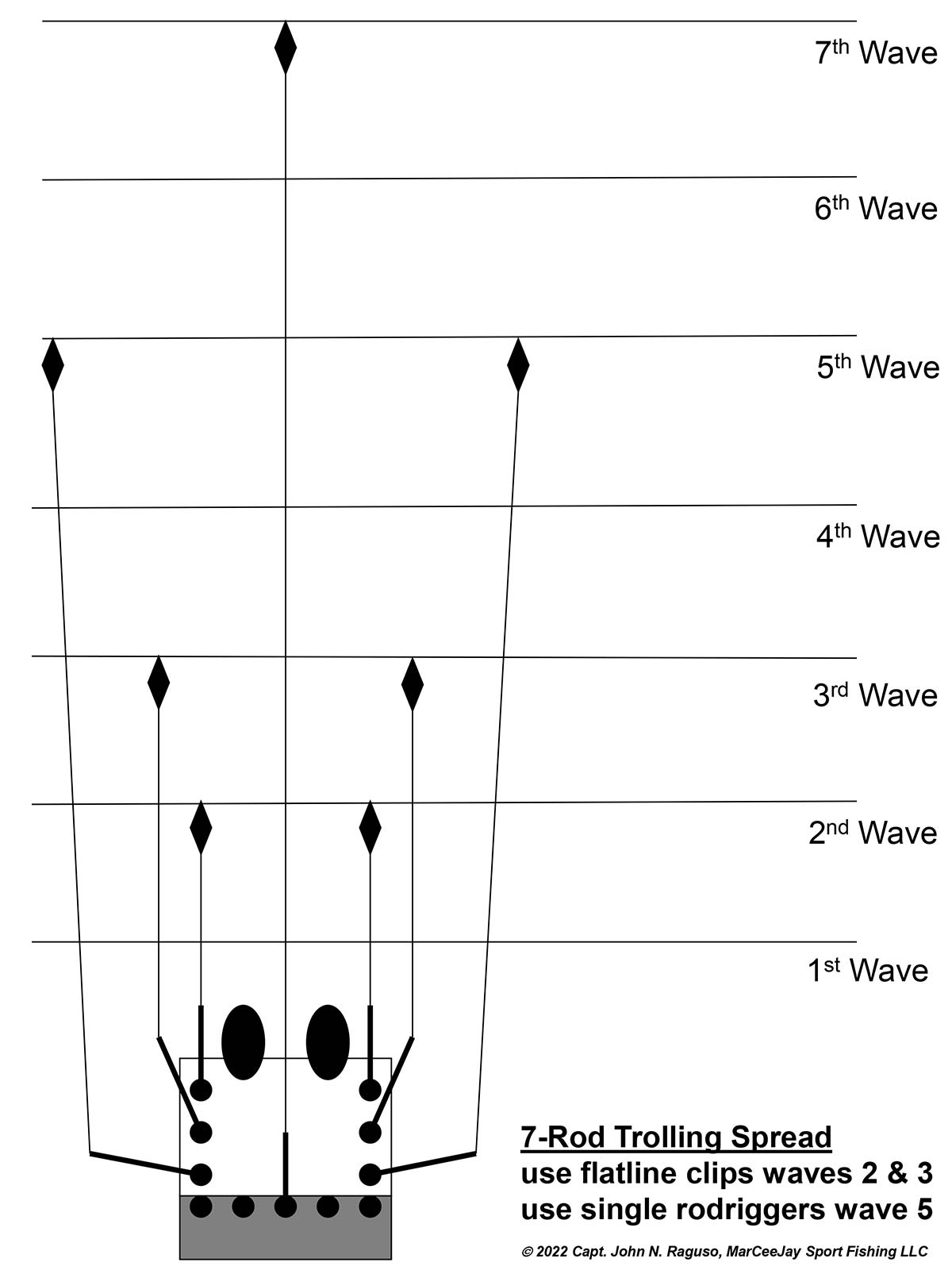 Whatever trolling pattern you decide to employ on your rigger-less boat, keep an eye out for the weather when you are offshore and be safe out there. 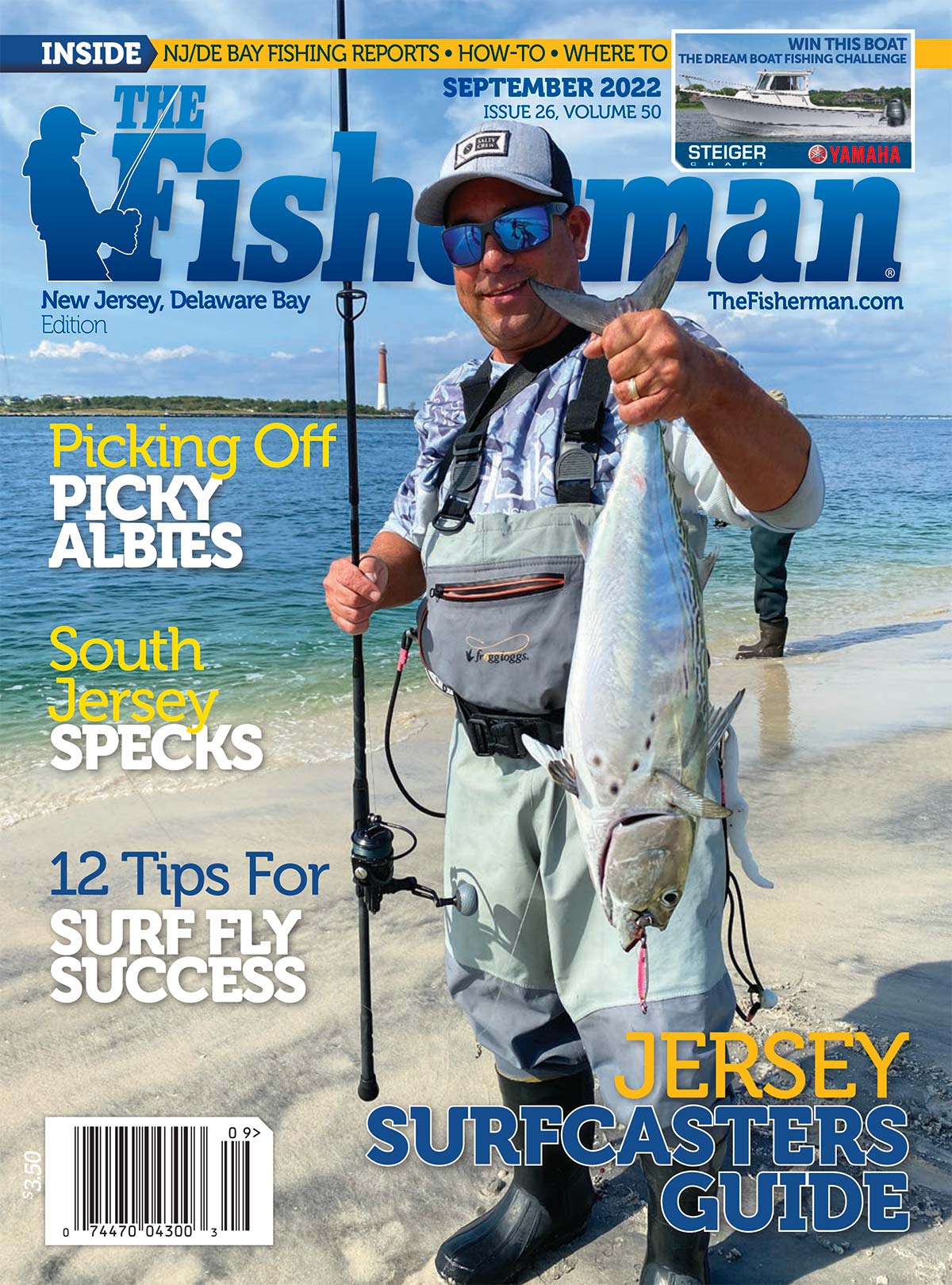