Hurricanes and Superstorms alter lives. Take it from me, Superstorm Sandy took everything from me as she landed Ground Zero along the coastal stretch from Bay Head through Island Beach State Park.

That particular storm changed the way humans live and operate along the coast. For the past six years, the Army Corp has been continually pumping sand from offshore to replenish and rebuild the beach along this Barrier Island stretch between Manasquan and Barnegat inlets.  It’s been much the same to the north and south as well over the course of time.

Beach replenishment is a flashpoint for many people and without going into the politics or validity of the idea, let’s focus on a more myopic view on how it affects surfcasting and what we need to do to adjust to the new conditions.

The first obvious change is where beaches spanned 25 to 30 yards out from the dune line, they now extend 80 to 100 yards to the high tide line. What was soft sugary near white sand is now hard packed yellowish gray offshore sand.

The wide, almost pavement like texture of the sand is actually pretty advantageous to beach buggy driving both in area to cover and in minimizing getting stuck in soft sands. But for the most part, that’s where the good stuff ends.

As the beach was built into the ocean, all the jetties in between Lavallette and Point Pleasant containing mussel and barnacle growth were covered with pumped sand and any cuts, sloughs and holes and sandbars were filled in to the same flat level out into the sea. A generally featureless expanse is now the norm. With no sandbars, most of the waves crash at the shore break.

Mussel beds, crabs and sea worm burrows that laid outside the outer bars have been covered over. You won’t see many hard clam shells anymore as they have been replaced by zillions of black freshwater clam shells that were pumped inshore.  So where does that leave us? Well to start, all is not lost. As of October, we have already had a few nor’east blows and remnants of hurricane swell that began to remove the topical hard packed sand exposing the original soft sand and that has started to cut up the beaches again. Spots pumped over two years ago such as in Mantoloking or Brick Beaches are already starting to showcase cuts, bars and sloughs.

By late November, we may have the start of the rebirth of productive fishing grounds again with strong ebb and flow of tides rearranging the top covering of sand.

Know previous locations of the groins and jetties. Fish may come back with innate sense of direction and repeated brain impression of previous groin location.  Softer sands will be underneath where jetty rocks were as well. Spy the low tide hours for any possible structure. Look for any place you have whitewater next to deep water showing a sandbar and a deeper edge. You won’t be finding many 100-yard pools but smaller 10- to 15-yard wide cuts that just started to dig themselves out.  One true advantage with the absence of deeper water in close is that you may now be able to wade out pretty darn far to make long lobbing casts out into the expanse, reaching dozens of yards past what you could previously.

Adjust by covering way more ground. Beach buggy permits are now allowed along most of the Ocean County towns again in particular, most notably Brick Beaches and Toms River Township, which now connects you to drive nearly from Mantoloking to the Seaside Pier unhindered.

One issue to overcome is I am already hearing of guys having trouble knowing where they are in the darkness due to the mountainous dunes obstructing any views to the street signs or notable home frames. Note little nuances like reflectors or garbage cans by the street entry walkways to identify where you are. Mark where the streets where dune grass growth is or where you can see flagpoles extending above the top of the dunes.

I’ll tell you my game plan this fall. It will contain the usual fall run tactics with a few adjustments. I’ll pack the Jeep and scout out areas to find subtle cuts, sloughs and sandbars, marking them down with land based waypoints. Night hours I’ll generally be working those deep water areas with black or blurple Bombers with a white teaser tied 18 inches above. Where I know sandbars are, I’ll carefully wade out on them and cast into the inky blackness.

Sun up hours, the clips get switched out with Ava jigs or Tsunami sand eels to mimic sand launces if they are present. Daytime casting will be a run and gun approach searching out blitzing schools of bass or blues blowing up bait. There is no substitution for exploration, testing and proving theories and casting time. Eventually, you’ll recognize small pocket areas that will hold fish time and tide again.

Set your sights on figuring out how the beach is changing from week to week, start nailing down productive areas and most importantly noticing what tide and time you are getting whacks. It’s kind of a brave new world again along those stretches that have received the most recent deposits from our once vibrant inshore lumps and ridges (That’s another story for another day.).

One note of optimism to keep in mind; a lot of the areas that were first up for replenishment efforts after Sandy have taken better shape in recent seasons (think LBI).  For those in the northern stretch, we all need a little patience; this is the first real fall run after finalization of beach replenishment, and it’s anybody’s guess who gets it dialed in first. 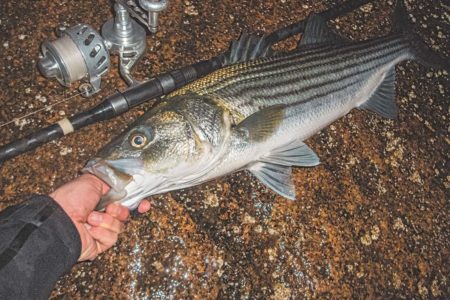