There was an old saying amongst the Romans that “fortune favors the bold.” I’ll add that it pities the stupid, albeit with checkered consistency. The line between the two can be discrete, but if you prologue your action with “This is a bad idea” then you probably know on which side you fall.

Those were my words exactly before making a risky cast that found itself fastened tight to a hard running striper. The fish was charging out and to my left, bringing my line progressively closer to the formidable pulpit of rocks that I had practically cast across. Since it was too late for me to be smart, I had to be bold. I scrambled over the granite, shellacked a lovely white and green by the gulls and cormorants, cranking, high sticking, and sweating in the thick night air of late July. The line cleared the jagged outcropping with fish attached and slowing. Success! My headlamp eventually shone on a broad flanked gal in the low 30-pound range at the base of the rocks. In a fine fraction of a moment, she shook her head one way and my bucktail went the other. Freed, the fish agitatedly skulked off like she was going to leave me a bad review on Yelp.

Stupid, bold, and all points in between, fortune had smiled on me.

Striper surf fishing in the dead of summer doesn’t exactly give many of us the warm and fuzzies like the spring and fall do. It’s become especially so where I fish as the “resident fish” of summer have become mostly schoolies. However, the little ditty I started with here is a reliable snapshot of what summer fishing can still be, and it’s not just because of my boneheaded judgment calls. Night fishing off of rocky outcroppings into deep, open water, with jigs is a highly effective means to catch summer stripers in the surf, especially as a means to connect with some of the nicer specimens that may be hanging around. Yet, fishing deeper does not necessarily mean fishing heavier jigs, something that may come as a surprise to those who don’t fish these spots. In fact, a big ol’ heavy jig will likely even cost you fish and make fishing these intimidating spots all the more difficult.

To set the scene, we’re talking bedrock, cliff-like shorelines. Essentially, anything that vaguely resembles Acadia National Park. The water that these spots offer is deeper than you’ll likely find elsewhere. As such, there is an impulse to reach for a Wile E. Coyote anvil of a jighead. This is understandable, as being as near the bottom as possible is imperative to summer success in these spots. In the absence of conventional baitfish, bass gravitate to these waters to feed on crustaceans as well as finned bottom dwellers such as choggies, scup, and small blackfish. This means the fish are fixated on the bottom.

Even when fishing shallower waters in this scenario, it’s not uncommon for swimming plugs to go unaccosted while fish readily hit jigs. Whatever you’re fishing, it has to be down.

“Fishing near the bottom” often translates to “racing the lure to the bottom” in the surfcasting psyche. Alternatively translated still as “big jig on bottom go boom.” This is because the notion of deep jig fishing is so enmeshed with inlet fishing. But, heavy jigs are needed in an inlet not because the water is deep, they’re needed because the water is deep and fast. The jig needs to get to the bottom quickly before the current sweeps it downtide and out of the strike zone. These cliff-like spots, while having water movement, have nothing close in terms of current compared to an inlet.

Secondly, while deeper than many other surf environments, a quick reference to a depth chart will reveal that the water you’re plying here is likely not as deep as you think it is. More often than not, it means depths of 15 feet at most, averaging 10 feet, and as little as 7 or 8 feet sometimes. Yes, the impressive depths of 30, 40, and 50 feet are not far off from where you’ll be, but the nearshore water that you’ll be casting into will likely be considerably less.

What this all means is that the standard bearer jig weights of 3/4 to 1-1/2 ounces are perfectly sufficient for reaching the bottom here and I’ll opt for the lightest one that conditions allow. But it’s not just a matter of “sufficiency.” These light jigs convey a sharp advantage as well: they can be fished incredibly slowly at depth. The water temperature will be eeking outside of the stripers’ comfort range and they will not be the spunky incarnation of themselves seen back in the spring. The fish will be lethargic in their feeding, and a jig fished slowly is just the thing to tickle their lazy fancy.

The two specific jig varieties that I rely on are bucktail jigs with a strip trailer and black ribbon-tail worms fished on leadheads. These lures don’t only reach the bottom, but once there they make for vague imitations of the wide variety of creepy crawlies that the bass are scrounging for. They’re also simple, effective, and cheap, the holy trinity for lures that you might lose to a snag.

In regards to bucktails, I prefer jigs tied densely with hair in the aforementioned weight range. The buoyancy of the hair allows these jigs to gently glide over the bottom on a slow retrieve. 3/4-ounce bucktails fish exceptionally well in the oppressively windless nights of summer, but I really try my best to fish this size whenever I can reasonably do so. The lead-to-hair ratio of this size really allows for a torturously slow retrieve that borders on hovering when fished deep, and the bass often find it irresistible.

Summer nights are not all stagnant however, and sometimes a heavier jig is needed to cope with high wind and sea; 1-1/4-ounce jigs, the oddball weight that I once never thought I needed, is typically what I reach for in these scenarios. It casts markedly better than the 3/4-ounce in an onshore wind, but doesn’t sink as quickly as a 1-1/2-ounce jig will. With that said, I find myself using 1-1/2-ounce jigs the least as they sink too quickly for my liking in these situations. However, I do find them useful for hitting structure that sits farther offshore.

The use of ribbon-tail worms for striped bass was pioneered by the late Tim Coleman, and my introduction to the technique was by reading an article by the man himself in this very magazine many, many years ago. I shelved the information for far too long before putting it to good use. These things are deadly on stripers, especially during the heat of the summer. Rubber worms are a crowded playing field, but I’ve settled on the Culprit worm, a durable lure that’s served me well in freshwater and now serves me well in saltwater. Specifically, I’ve settled on the 9-inch Culprit Fat Max, a thicker version of the standard Culprit. I’ve fished these against thinner worms in longer sizes, and the Fat Max not only catches more stripers, but larger stripers as well. This is perhaps due to the thicker bait displacing more water and causing more commotion detectable to fish’s lateral line. No matter the reason though, these things work, and they work best fished as slow as possible while still getting the tail to undulate. While 3/4-ounce is as light as I’ll go for bucktails, the worms are less bouyant, and I’ll go down to a half-ounce jig while fishing them, if necessary.

Casting jigs this light in deeper water can obviously be fraught with challenges. Casting distance is one, and getting a feel for what these jigs are doing and where in the water column they are can be another. To address this, I take a nod from freshwater finesse fishing and often downsize my surf gear for these lures. I drop from my go-to setup of an 11-foot rod and VS250 to a 9-footer and a VS200. I also opt for 30- or 40-pound test braid, rather than 50. The thinner diameter allows the lighter jigs to be cast farther and also creates less drag, while the lighter setup can make it easier to keep touch with such dainty offerings. As I stated earlier too, many of the resident summer fish are in the 25- to 30-inch range and this setup keeps the fight that they offer fun, while also being fully capable of subduing larger bass.

For much of the striper coast, summer is either a period to endure between the peaks of the season, or even a time to skip over entirely. It’s the surf calendar’s fly-over country. But in reality, every part of the season has its own charms and rewards, summer included. I first started fishing small jigs deep as a way to “cope” with the summer surf, wistful of spring and eager for fall. Years later, it’s grown to be a part of my season that I truly look forward to. It’s fun, simple, and comes with real chances of encountering a surprise or two. In other words, it’s surf fishing at its finest. 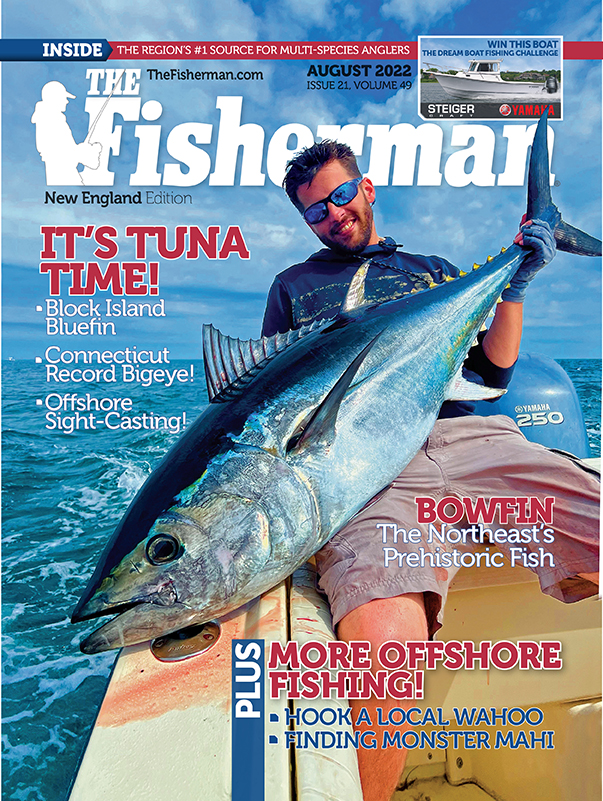