For a few summers, my son and I snorkeled a local river. In addition to smallmouth bass, we saw brown and rainbow trout, suckers, bullheads, sunfish, and largemouth. Smallies concerned us most. From the second day at it, I noticed some were not where we sighted them earlier. I had found six in a hole. None were there on the next occasion, which happened to be the next day. I wondered if poking around had frightened them off.

A couple of years before, Matt and I spotted a smallmouth at least 20 inches long. We threw plastics at it, avidly. I wondered why the bass seemed to stare us down, not ducking into the depth immediately available. The next day, we came for it with a bucket of shiners. It was a summer evening when another guy was there, who told us he had caught a 21-inch smallmouth just an hour ago, upstream an eighth of a mile, in the deep hole of another river above the confluence where a wing dam used to be.

I had no doubt it was the same bass. I could’ve been wrong, but in any event, it didn’t show anywhere near where it had been. I thought of the commotion of our throwing plastics at that fish the day before. It could have abandoned the precincts because it came to feel vulnerable. Creatures survive by perceiving aggression in creatures bigger than them – and avoiding it.

More occurred to me than imagining the bass avoided danger, though. For the first time, I began to wonder if smallies migrate in a river during the summer months. Everyone seems to know they find deep holes in late fall and winter over in them, but summertime is when you fish spots you know are dependable. You actually catch some bass, and the spots make you believe they harbor stable populations. But if they don’t, that’s no reason to assume a likely spot won’t be productive, and besides, if bass move around, that means fresh fish get caught. Who wants every outing amounting to the same half dozen?

On one occasion, Matt and I came to the river without snorkels or rods. Sometimes we came to just mess around. Matt waded up to his knees, brandishing a long stick. For no apparent reason, he jammed it underneath a shallow undercut bank and swished it long and hard. I could not believe the number of smallmouths, some of them a foot long, shooting out into open water and barreling downstream through shallows barely covering their backs. More than a dozen of them. We checked up on that spot a number of times, and there never was a single bass present. Are smallmouths so sensitive that Matt’s act put the Kibosh on them?

I have my doubts about that, but I don’t pretend to know. I’m sure bass use the spot, though I’d think as a carryover to deeper. I do know smallmouth bass are lake rovers, physiologically fit for covering more range than largemouth. The caudal fins have a pronounced fork, and the body’s musculature is stronger. Both differences leave me little doubt that smallies move up and down a river during the warmwater months.

Our snorkeling, river explorations, and encounter with the big one doesn’t prove that they migrate. Even less does what we’ve learned from our exercises explain why they migrate, if they do, but an obvious answer is that a smallmouth bass is built to move. They don’t seem oversensitive to acts of aggression, either.

About that, consider the example of another nice bass.

Matt and I did a float trip on the same river. We saw a lot of commotion in downstream shallows, and I let loose a soaring cast. The big smallie lunged forward and engulfed the Senko. A great fight ensued, but the bass got off near the canoe. Matt pitched his Senko, the fish grabbing it immediately. I told Matt to loosen his drag, but it was too late. That was an aggressive smallie rather than a fearful one.

Dominating a stretch like that, it wouldn’t surprise me if a big one covers ground just to conquer a river. 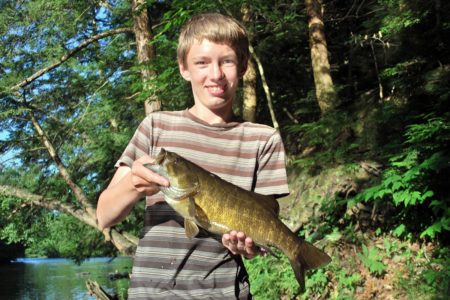 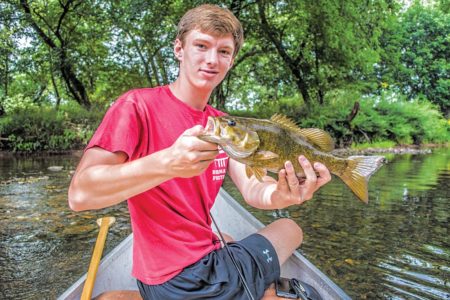 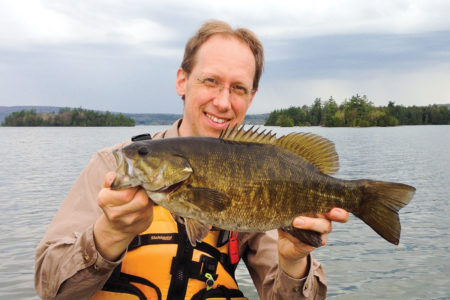