There are few places on the East Coast where striper fishermen will find a 45 mile stretch of coastline that includes six rivers teeming with stripers nestled in between miles upon miles of pristine sandy white beaches. Southern Maine is such a place. It is a very unique area, with much to offer today’s striper fisherman.  If you’re a small boat or kayak river troller, you will delight in traversing the Saco’s 5-1/2 miles of winding striper terrain. If you prefer casting bucktails from a bridge, you will find the Ogunquit River your cup of tea. Boat fishermen who enjoy drifting live bait for keeper stripers have the York River and adjacent beaches. And there’s more…

Traveling north, in the wake of the New Hampshire shoreline you will encounter the York River. This gem is better known for the size, rather than numbers of fish.  The mouth of the river and harbor offer a great opportunity for boat fishermen who enjoy drifting live bait.  The local secret here is jigging live harbor pollock at the mouth of the river and then drifting from the river’s mouth on an incoming tide through the harbor. Live bunker and mackerel, or chunks of natural bait also work well. If you prefer fishing the evening tides you might fair better using live eels. Long Sands and Short Sands Beaches are also excellent places to fish from a boat or the surf.

The next river heading North on Route 1 Is the Ogunquit River. The best fishing here is near the Green Bridge located on Beach Street, which will be on the right-hand side, heading North on Route 1.  In the pool just above the bridge, off the bridge itself or right at the mouth of the river are good places to concentrate your efforts. There are a lot of big fish caught from the beach right at the mouth of the river, but aren’t many big fish inside the river itself.  Casting bucktail jigs, small poppers or tins are consistent producers of schoolies here.

Moody Beach, Wells Beach, and Drakes Island Beach are all part of the town of Wells. These three beaches run directly off of Route 1 and are well marked by road signs.  This is an exceptionally long stretch of white sand, with many good spots. Just look for any rocky area anywhere along these three beaches and your chances of hooking a keeper are very good.

The next river up the coast is the Merriland River.  This is accessed off of Lord Road, which runs off Route 9 in Kennebunk.  The Merriland is an estuary that runs through the Rachel Carson Wildlife Refuge.  It is an excellent place for small fish.  Due to the topography of the river and lack of ground cover it is a good place to fly fish. This is one of the earliest rivers in the state for catching school size fish, starting during the last two weeks of April.

The first major river in the state is the Mousam.  It is accessed from either Parsons Beach at the mouth of the river, from the Route 9 Bridal Path that is just east of the boat launch, or from Brown Street just past the railroad bridge.

You will find keeper bass at the mouth of the Mousam around the first full moon in June, which usually corresponds with the arrival of the first mackerel along the beaches and rivers.  You can find school stripers anywhere along this river all the way up to the bridge.  The Mousam runs through a protected salt marsh, which makes fly fishing here very productive. Parsons Beach is one of my favorite fishing spots. You can access the mouth of the river from Parson’s Beach. Turn right just before you go over bridge to get to the beach. The mouth of Mousam consistently produces fish all season.  I like it best on the last two hours of the outgoing tide.

The next stops are the towns of Kennebunk and Kennebunkport.  The Kennebunk River can be a difficult river because of its heavy boat traffic.  The mouth of the river hosts a striped bass population from early May right through October.  If you can negotiate the river on a slow traffic day, the area just inside the breakwater is a good spot for casting lures or trolling a tube and worm. Kennebunk Beach, a.k.a. Gooch’s Beach, and the jetty to the Kennebunk River are good places to fish early and late in the day. Boat fishermen like to anchor or drift along the rock piles just west of the beach. There have been many jumbo stripers caught here.

If you head East on Route 9 you will pass Goose Rocks Beach, and Fortune Rocks Beach.  I don’t think I have encountered more than one or two other fishermen at either of these two spots, and have caught fish at both them. Goose Rocks Beach has a lot of great options for boat fishermen as they can fish the sandy beach or the rocky shoreline on the backside of Timber Island. Moving further east you’ll find Fortunes Rocks which is a great surfing spot and loaded with rocky structure. Boaters beware, this is gnarly terrain. The beach itself is a beautiful sandy beach that leads into Biddeford Pool. I have had good luck here with needlefish plugs at night. Biddeford Pool lies on the Western Bank of the Saco River.

Early May signals the beginning of the fishery in the Saco River, the first arrivals being schoolies.  The first place these fish show up, is five miles up the river at the Biddeford-Saco town line.  These early fish are caught trolling tubes, casting bucktails, small poppers or tins.  With the keepers arriving at or around the full moon in June. The Saco gives up good numbers of fish and that is well-known, but it also gives up many trophy-class fish. The big fish are generally caught using chunks, live bunker or mackerel, with eels being preferred after dark.

The Saco is a very interesting river in that it has a lot of deep fast-moving water, while also having many shallow flats and bays, which make it great for casting. The river’s entire length is prime striper country.   The tide runs about 6 feet, and the outgoing tide runs very hard.  School fish are available at all stages of the tide. The only thing that tends to put the fish down is the boat traffic.

One of the premier big fish striper areas in Southern Maine, is Higgins Beach. It runs off of Route 77, which is east of the Scarborough River and Prouts Neck.  Live eels, at night or live bunker during daylight work best here.  If I want to put my time in to catch a really big fish in late summer or early fall, this is my first choice.

These six rivers, and the beaches connecting them, offer exceptional fishing opportunities.  Nowhere along this stretch of coastline will you encounter the elbow-to-elbow fishing most fishermen dread.  You can always count on fishing of some type.  If it’s too nasty to launch your boat, you are sure to find a section of beach, or a deserted river bank to satisfy your fishing pleasure. 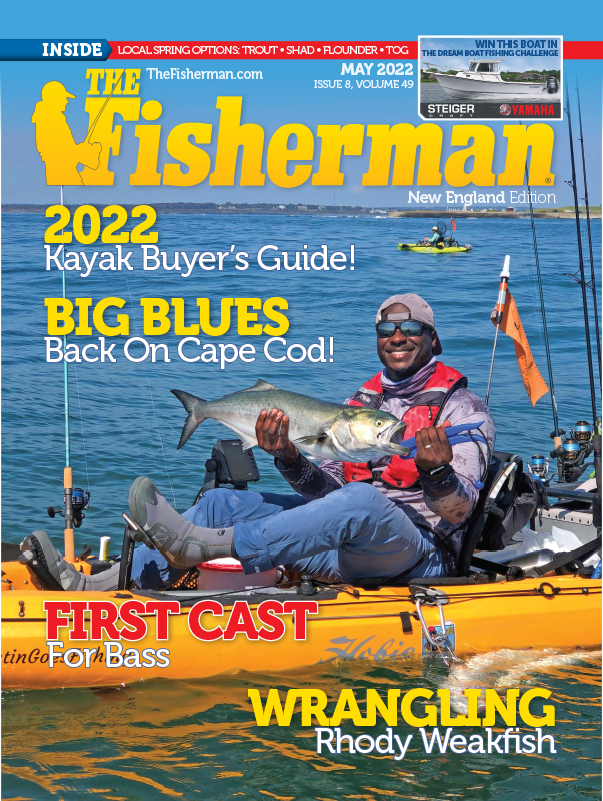