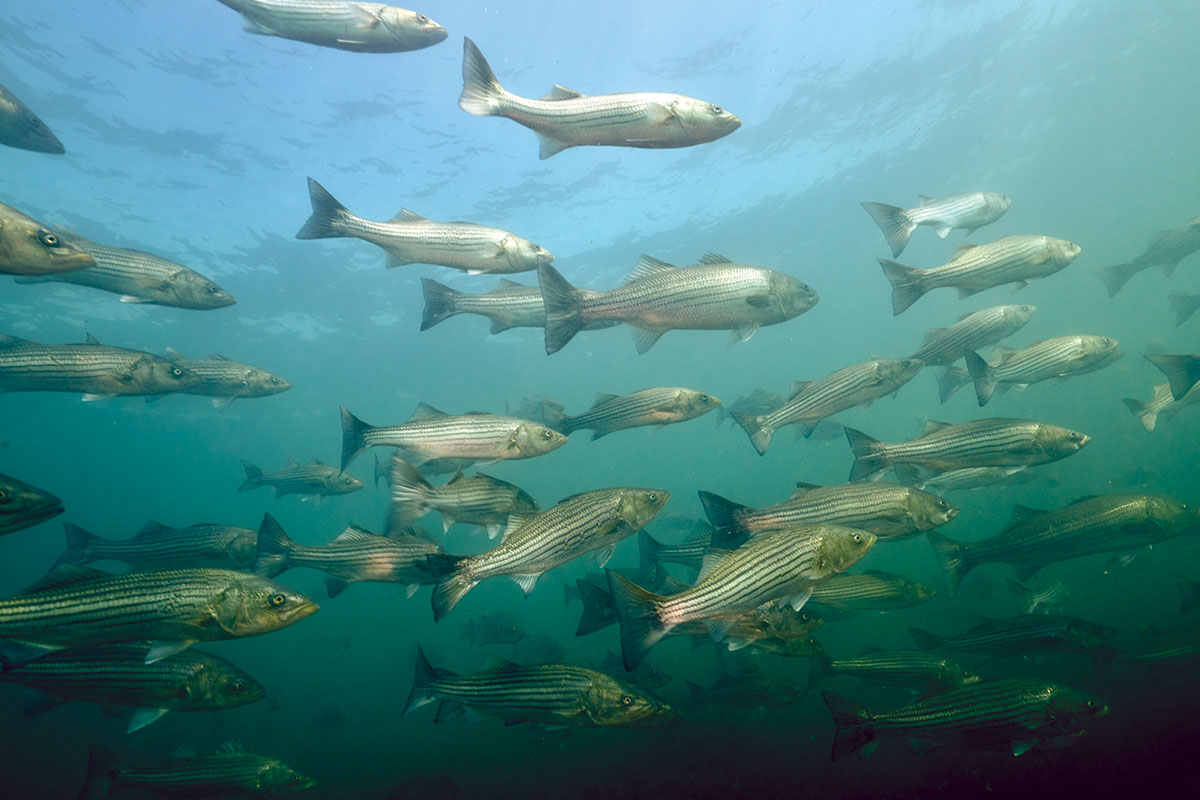 It was nearly midnight when Danya Mahota and I pulled up to the mouth of the Nauset inlet. It was May 20, the early-season striped bass bite was in full swing on Cape Cod and Danya wanted to show me the huge schools of baitfish he had encountered the night before, just inside the first bend where the Atlantic Ocean pours into Nauset Bay and Salt Pond Bay. Minutes later Danya called out that he was catching glimpses of what appeared to be very large schools of bait, just on the edge of the reach of his light. I quickly pulled out my underwater lighting system and flooded the area with a broad beam of light that penetrated the surface and revealed a vast school of tiny stripers, all ‘cookie-cutter’ fish around 6 inches long. I had never seen so many micro-sized stripers, coming through an area in massive schools, with hundreds of bass, tightly-packed together and heading in the direction of the inlet’s mouth, only a hundred yards away. They appeared and disappeared like a silver cloud with discernible stripes, and there was no confusing them with white perch that would be of equal size or larger. This went on for about a half an hour and I kept saying, “There’s no way that these are Chesapeake Bay fish, they’re way too small to have ventured out of the Bay and traveled this far up the coast.

Over the next several days we encountered these fish out in the open ocean and inside the bays. When I posted our experience on my Facebook page I quickly received messages from up and down the coast reporting similar sightings. Sean Kearney reported, “We saw a big school while spearfishing in a South County breachway last week. Fish were 6 inches long.” Sam Smith from East Haven, CT said, “Tons of micro bass around my area. Never seen so many tiny bass in such numbers.” I had several different divers report seeing thousands of micro bass at Moriches and Shinnecock inlets on Long Island. From Maine to New Jersey the messages kept pouring in. I made some calls and found out the fish traps had been catching them in great numbers both in Rhode Island and on Long Island. There was an explosion of young bass on the ocean front, in the breachways, backwater creeks, bays and estuaries. Finally, some very positive news regarding striped bass recruitment!

I reached out to Joe Langan, a biologist at the University of Rhode Island and asked him where he thought these fish were coming from, he then reached out to Jesse Hornstein, a Biologist with the New York State Department of Environmental Conservation and he reported, “In 2014 and 2015 we had above-average recruitment for striped bass (age 0 fish) on the Hudson. In addition to our survey for the age 0 (YOY) fish, we also have a survey that is designed for yearling (age 1) striped bass. Our index for the 1-year-old fish last year was the highest we have had since the survey started in 1984. Many of the small fish people are seeing are likely from the 2014 year class, and some could also be from 2015.”

The key to this explosion of Hudson stripers is that the conditions were ideal for the survival of the stripers in their first two years. Therefore, if there was a ‘perfect storm’ of conditions that favored stripers in the Hudson, couldn’t those same conditions exist in other rivers, including: Delaware, Housatonic, Connecticut, Thames, Narragansett Bay, Piscataqua and Kennebec? The striped bass may well be the most studied fish in the world, but for all we do know, there’s still a whole lot of mystery concerning where they spawn, holdover and what the different migration routes are.

Where to Fish and  What to Use

Having a 30- or 40-pound striper stretch your line and test your drag is always a great experience, but so is catching a couple dozen feisty schoolies on a single tide. Those anglers that saw the recovery of stripers in the early 1990s experienced fabulous fly fishing opportunities, as well as terrific light-tackle angling. Unlike the hunt for big bass, when you spend a great deal of time looking for honey holes where the older, wiser bass lurk, schoolie-sized stripers are more readily accessible and you can find them just about anywhere.
The smaller the stripers the larger the schools. Whereas very large stripers tend to travel in smaller schools, sub-legal size fish are prone to travel in large groups where ‘safety in numbers’ plays a much more important role in their survival. However, many times I’ve seen a large cow hanging back from the schoolies with her belly close to the bottom. As the season progresses and especially in the fall I’ve witnessed a mixing of different size fish in very large schools. This seems to happen when the stripers aren’t necessarily moving from spot to spot, but for whatever reason they are all balled up in one area. I call this their staging area where they just hang waiting to go on another hunting expedition. Stay on your guard because you might go from catching numbers of respectable fish to winning the lottery and connecting with a trophy striper. Dawn and dusk see heavy feeding activity, but you can count on stripers feeding in the dead of night under dock lights, next to the shadow lines on bridges and anywhere small baitfish are active.

Eel grass is the ultimate striper magnet when it comes to striper hunting grounds. There is always a bounty of critters to chew on in those waving fields of green. The smallest of stripers are content to eat everything from insects and worms with grass shrimp and sand shrimp being one of the most sought-after prey items. Try passing a seine net through the edge of an eelgrass bed, or where the muck, mud bottom meets a steep bank and you should be able to load up on shrimp (Check your local regulations on netting in your area.). Chumming the water with grass shrimp will put stubborn fish in an eating mood instantly.

In the early spring when the bass are targeting shrimp, I’ve always found that small bucktail jigs with soft plastic curly tails work well and of course there are many different shrimp patterns you can present, and don’t overlook the Clouser minnow because any offering that kicks up a little mud or sand will likely get eaten. When the water warms up in late May and early June you’ll find that top water poppers and Zara Spook-like offerings produce lots of explosive surface strikes.

The abundance of small stripers the past couple of seasons has provided some excellent light tackle opportunities beginning as early as February and carrying well into springtime. Coupled with relatively mild winters and an abundance of bunker, both peanuts and adult, many back-bay creeks and tidal rivers have been yielding consistent action with bass ranging mostly from 2 to 5 pounds. These are largely winter-over fish that inhabited the bays and harbors late into the fall, lured by prodigious amounts of peanut bunker.

The neat thing about this fishing is the ease of accessibility, given that much of it is taking place from town docks, marinas and mainland canals that at this time of year are not affected by residency requirements, and it doesn’t require a four-wheel-drive vehicle or a boat to get in on the action. Many of these locations are just minutes from home and require just an hour or two to take advantage of. You can hit them for an hour before work or an hour or two after dinner and it doesn’t take a truck or boat full of tackle to score some fish. These short trips are also made-to-order for young anglers with limited patience for extended outings on the beach or boat, or to introduce a friend or neighbor to the sport.

Micro bass are perfect targets for tackle designed primarily for trout and freshwater bass. A 6-foot light action spinning rod rated for 1/4- to 3/4-ounce lures and matched to a 2500 series reel spooled with 10-pound test braid is the perfect outfit for these scrappy little stripers. Small swim shads like the 4-inch models from Tsunami and Storm, soft plastics fished on 1/2-ounce jigheads, 1/2-ounce bucktails and small swimming plugs in the 4-inch size range have all proven effective on these small bass.

In addition to the appearance of the tiny, micro-sized stripers last spring, the abundance of 2- to 5-pound fish are likely a product of good 2011 and 2013 year classes and should help give striper stocks along the coast a much needed boost in the years ahead. Please be gentle with the handling of these fish, we need them to continue to thrive, reproduce and bolster the current population of stripers. Consider crushing the barbs on all the lures you’ll be tossing their way, you’ll enjoy more hook ups and allow for much faster and easier release of these fish. Personally, I won’t fish with children unless all the barbs are crushed and I also make sure they are wearing sunglasses to protect their eyes—you don’t want their first fishing trips to be anything but enjoyable.

So slip on your waders, jump on your kayak, hit the beach, the docks, bridges and breakwaters, and be on the lookout for bass of all sizes in your neck of the woods. Be sure and check out my companion video to see how these pint size bass feed, both day and night.