An new electronic tagging study led by scientists from the University of Maryland Center for Environmental Science found that large mature striped bass leave the Chesapeake Bay every year to roam coastal waters until the following spring. Surprisingly, those smaller, younger fish that remain in the Chesapeake died off at the rate of 70% a year.

The study implanted 2-inch acoustic transmitters in 100 Potomac River stripers, with their coastal shelf migrations recorded over a 4-year period by telemetry receivers throughout the Mid-Atlantic shelf waters and southern New England. Researchers found that only large striped bass from the Chesapeake Bay migrate to ocean waters when they reach 32 inches in length, and smaller fish remain resident to the Chesapeake Bay, regardless of sex.

“Knowing the size at which they leave, we can do improved management that is tailored better to commercial and recreational fishing sectors those related to catch and size limits,” said study author and Professor Dave Secor of the University of Maryland Center for Environmental Science. “It allows us to bring different parts of the fishery into an assessment model to evaluate stock health and test how effective regulations will be.”

“By our best estimates they are in the Chesapeake Bay for 9 years, and when they reach 32 inches they head north,” said Secor.

The researchers said all migrating striped bass spend summer and fall months in Massachusetts waters, and then undertake late fall migrations to southern waters, before returning to the Chesapeake Bay to spawn the following spring. The fish will leave again a few weeks after spawning to return to the ocean.

“The mortality rate is alarming,” Secor told the Chesapeake’s Bay Journal.  “If fish are dying at greater than 50% or 60% a year, that’s a problem.”

The cause or causes aren’t clear, the study’s authors suggest the high mortality rate in the bay could be linked to mycobacteria infections, which have been found to afflict the vast majority of striped bass in the Chesapeake.  Secor told the Bay Journal that it needs to be addressed to right a troubling decline in the striped bass stock.

“Biotelemetry has allowed us to move beyond the question of whether Potomac River striped bass leave the Chesapeake Bay, to where do they go when they leave? All arrows point to Massachusetts,” said Secor. “There is a remarkable connection between fisheries in Potomac and Massachusetts Bay and Cape Cod.”

Ocean emigration by striped bass has challenged both anglers and fisheries managers. Quantifying the size at which fish leave the Chesapeake directly supports improved assessment models and tailored allocations between recreational and commercial fisheries. 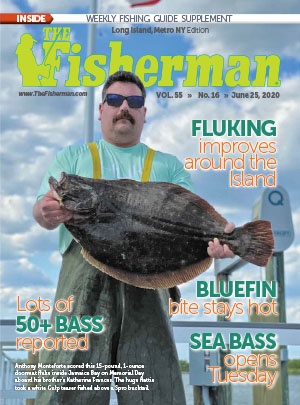