The trend of warming water temps in the past 6 or so years has brought some welcomed southern speedsters to the surfline and around inlet areas, especially during the dog days of summer during August. Not only is it not uncommon to catch Spanish mackerel, bonito, and false albacore in the surf around the inlets, it’s expected if you play your cards right. So how do you rig up for Spanish macks, bonito, and tunny when they come crashing through?

Start with the rod and reel set up. I throw a St. Croix Tidemaster 76TISMF matched with a Shimano Stradic 5000 spooled with 30-pound Power Pro braid. You need a little softness in the tip of the rod and not too fast of a tip as the drag ripping runs can pull hooks or snap line with the power of the pulse from an albacore tail or the burst from a Spanish or bonito. A medium/fast action is best for a little bit of give but still with enough hookset power.

For the leader, via Uni-to-Uni knot tie a 48-inch section of 25-pound fluorocarbon leader to the braid running line for bonito and albies. Consider using 30 pound for Spanish as they have serrated teeth that can quickly cut the line if they inhale the front of the jig.

Pretty much it’s all about metals when it comes to offerings to throw. My personal favorites include the 1-ounce Williamson Gomoku jig, Deadly Dick #4, and Hogy Epoxy jigs. I always tie the lure direct to begin with, then if I hook enough fish to feel confident they are on a hot bite and not looking too scrutinizing for the leader, I’ll tie a small 50-pound Tactical Anglers Power Clip or 30-pound duolock snap clip so I can interchange lures with expediency.

Four to 5-inch pink or bright soft baits with 1/2-ounce leadheads can also be used. Whipping them back off the jetty tips where the waters are swirling, or casting into the deeper part of the inlet, allowing it to sink before a frantic snap-pop retrieve is a proven method.

Nowadays, we all think of ripping metals back quickly for speedsters, but one old school method was a popping cork with a 30-inch, 25-pound fluorocarbon leader behind and a small Clouser fly or Fin-S fish. Pop the cork and letting the fly or soft bait dart forward and sink to get the attention of one of these species.

Another antiquated tactic was to tie to a 1-ounce drail weight, a 24-inch leader again, but with a #00 Clark spoon tied to the end, cast out the rig and reel quickly almost as if you were trolling the spoon. But with the advent of easily castable specialized thin metals now, this method is probably moot.

The key to speedster success around inlets is to walk out as close to the jetty tips and bends as you can. Remember, inlet jetties can be dangerous, so be sure to don Korkers to get out to these spots. Work the moving water, whether it’s incoming or outgoing tides when baitfish are getting pulled into the inlet or pushed outward when bait swirls at the mouth in a confused state.

Speedsters will enter an inlet and push in about halfway down, but very rarely enter the bay system so in general the closer to the jetty tip, the better. Visual identification is common as Spanish and bonito will vault out of the water as albies will ‘rainbow out’ and crash bait schools. However, many times, blind casting will get you your first hits. I find that once a cast is made, allow the lure to sink for a five-count before reeling back in so the lure covers a good portion of the water column with its flash and not just the top surface portion.

For an inlet caster, nothing gets you supercharged as the sound of a zipping drag from a speed demon run. For many, Spanish, bonito, and albies from the shore are a bucket list catch. Now’s the time to put your tackle to the test with these speed demons. 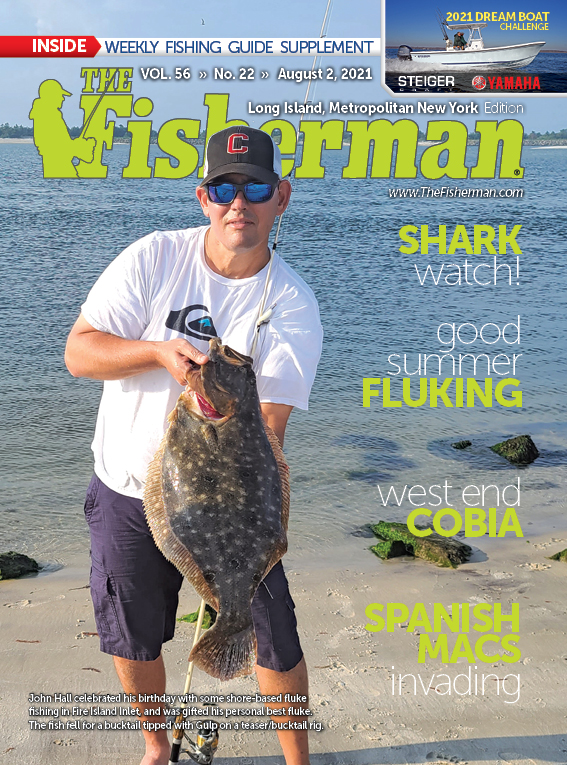