Some anglers change lures frequently seeking “the” lure that will induce a strike. Perhaps it’s a belief in “magic,” but more likely a lack of information – where are the fish, what is the bait, and at what depth are the fish feeding. In this way, fishing is unique among outdoor sports. Consider a golfer’s decision. The golfer is trying to reach the green and get close to the pin. The golfer sees the pin, and judges its distance. This information helps the golfer select the right club and the right swing.

However, there is no flag to see for surf anglers. With experience we can infer things, but unlike the golfer, we can’t know exactly “where the pin is.” Our choice of lure is at best a lucky guess, but with a tool kit that includes experience, eyes and ears, and trial and error, a better choice is possible.

Basically, lure selection revolves around bait. Some decisions are easy, such as a blue and white popper during a mullet run. However, others are trickier. Peanut bunker, for example, are deep bodied, and white and silvery, suggesting a chrome tin, white bucktail, or swimming plug, but they swim deep as well as near the surface. Surface or sub-surface lure?

I make my decisions using a simple method. I start with bucktail and pork rind, so I can vary presentations and gain insights. I may not catch fish, but I might expand my learning curve. If a bucktail garners no hits near the surface, but a heavier one near the bottom does, I have eliminated water. I may not hook-up, but I found the right depth, although maybe not the right action or color. Now, if I catch fish with a chromed tin or tin and tube, I’ve solved the puzzle. I have successfully used a process of deductive elimination that proceeds to a viable conclusion.

Bait size is crucial, too. I love fishing with bucktails, but sometimes there’s a better choice. I was catching school stripers feeding on 2-inch peanut bunker using soft plastics and bucktails. Then, I noticed a dark patch in front of me. There was no surface feeding, but these were 5-inch peanuts. Bucktails produced nothing. However, the peanuts were in a bait ball near the surface for a reason. I put on a 1-ounce Cordell pencil popper and made a cast to the left of the school. Half-way in, a fish exploded and I was hooked up to an upper teen striper. I caught and released two other teen-size stripers that day. The stripers were eager to feed on what seemed like a wounded peanut lagging behind the school, and I mimicked that with a pencil popper.

We all enjoy a blitz, especially the surface version when lure selection seems easy. A surface lure might seem obvious, but occasionally you’d be wrong. Consider this real-life example. Fish are rolling but they won’t even sniff a surface lure. This is common when bait is small, such as spring sand eels, and takes a very small sub-surface lure to produce strikes.

The opposite is also true. Years ago, I was fishing east-end beaches during a blitz of blues, bass, anchovies, and herring. Initially, the action was frantic with screaming gulls, exploding fish, and bent rods. Any lure worked, and the catch was dominated by bluefish. However, as the commotion moved west, the blues pushed the anchovies offshore leaving herring and stripers in the trough. At this point, surface action stopped, and previously successful lures were untouched. Many anglers turned tail for home, but remaining anglers began searching for a productive lure. Pencil poppers triggered a few strikes, but it was medium-size metal-lip plugs that received the best response. We logically concluded the herring were spread out and stripers were hunting for individual wounded herring. Metal-lip plugs won the day.              .

The moral of this story is, try to accumulate information and decipher the code for a given set of conditions, and then select an appropriate lure. Be patient and try as many different presentations as possible before switching to another lure, and you’ll catch more fish more often. 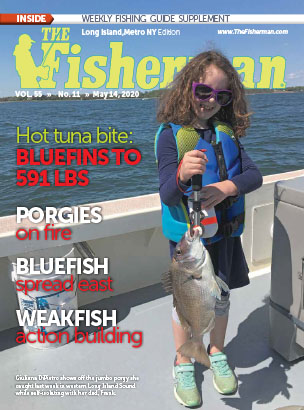