This perennial upper Chesapeake hotspot has been drawing “catch & release” trophy hunters away from the Striper Coast for decades.

You’re one cast away from the fish of a lifetime, a 50-pound fish on light tackle.” That description of Susquehanna Flats by Capt. Richie Gaines perfectly describes the appeal that drives anglers from up and down the Striper Coast to the upper Chesapeake Bay each spring.

Twenty years ago, striped bass on the Susquehanna Flats were a world-class fishery. The shallow-water catch-and-release action was exhilarating with huge numbers of 10- to 25-pound stripers caught, with 35- to 50-pounders fairly common. Over the years, action began to decline, big fish became scarce, and even smaller fish were few and far between.

Striped bass fishing on the flats was poor as recently as 2014. However, there was a definite improvement in 2016, and fishing was good last spring through April and May of 2017. Could it be that Susquehanna Flats is once again establishing itself as an early-season striped bass hot spot for anglers who enjoy light-tackle casting action with 4- to 20-pound striped bass?

Successful fishing on the flats today usually requires more time and patience than in years past, but those who make the effort put themselves in position to be rewarded with 20-, 30- and perhaps even 40-pound striped bass.

Susquehanna Flats, at the very top of Chesapeake Bay in northeastern Maryland, is within easy reach of most northeast anglers where Route 95 south puts the trophy striper hunter directly into the vicinity of boat ramps in Havre de Grace and Elk Neck State Park. For reference sake, Havre de Grace is about 60 miles south of Philadelphia, roughly 2-1/2 hours (without traffic) from the base of the George Washington Bridge where I-95 spills into New Jersey from New York and New England.

Springtime striped bass migrating north in Chesapeake Bay are headed to their spawning grounds in the Susquehanna and North East rivers, and while a few fish may be caught in March as they make their way over the flats, the bite gets better in early April and improves as the water warms in mid- to late April and early May. Maryland’s early catch-and-release season on Susquehanna Flats will be open until May 4.

“Find the warmest water and fish it, regardless of depth,” Capt. Gaines recommended of the spring hunt. The first striped bass of the season on the flats will be in the warmest water they can find. Early in April, because water coming out of the Susquehanna River at the top of the flats is often cold, Gaines suggests fishing the southern-most portion of the flats, between Turkey and Sandy points (They are the southern boundary of the flats – striped bass fishing is not allowed south of Turkey and Sandy points in the early catch-and-release season on the flats.).

As the water warms across the flats in late April and early May, the top priority for anglers becomes finding and fishing around bait (herring and hickory shad). 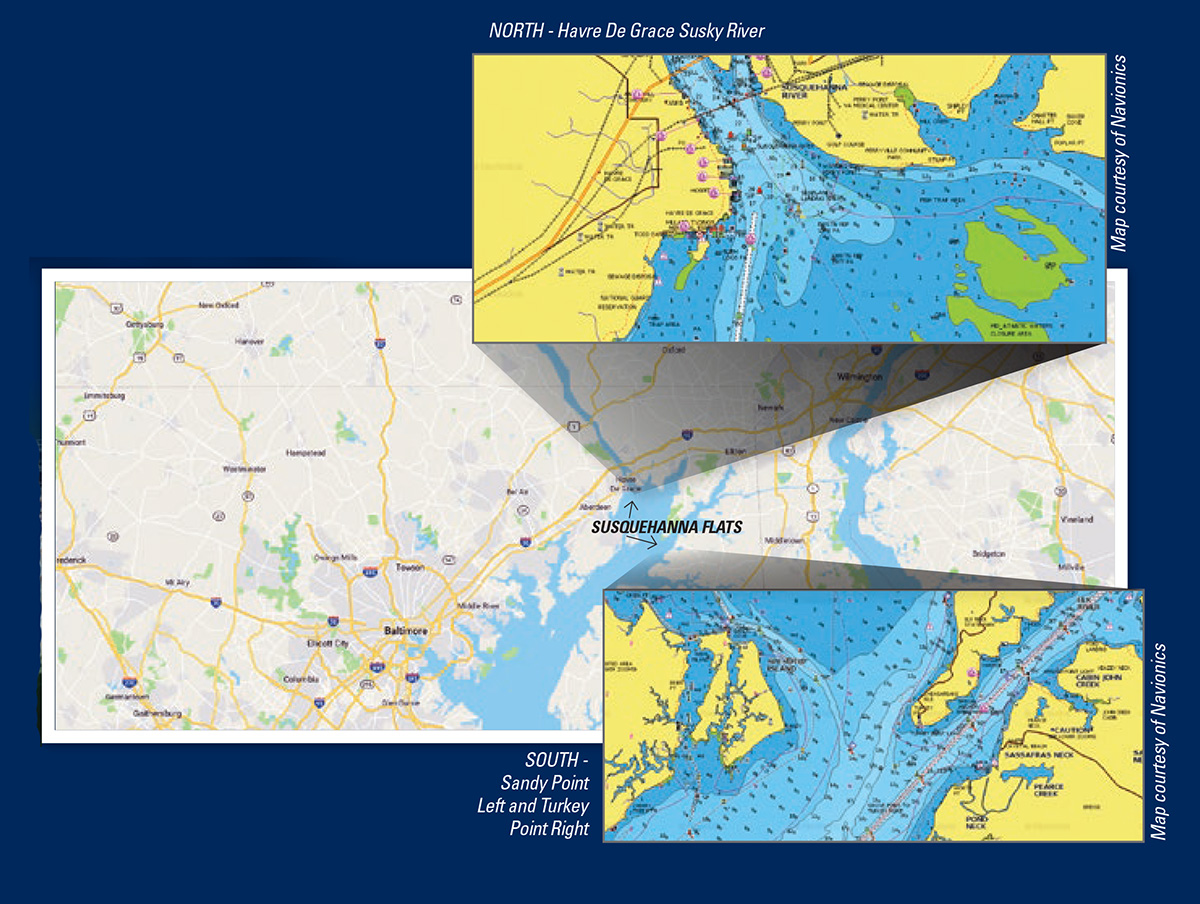 Before reaching the rivers, Gaines said stripers use the flats as their feeding grounds. Stripers will stage in deeper water just south of the flats, moving up on the shallow flats in “pulses” as they pursue herring and hickory shad. When fishing is good it can be “crazy” good with baitfish easily spotted on the depthfinder, diving birds, slicks on the surface, and fish hooked on practically every cast; 4- to 10-pound male striped bass and big 15- to 40-pound females can provide a few hours up to a couple of days of sustained outstanding action, before the bait scatters, and bass move back off the flats into deeper water.

There is no predicting when baitfish will draw bass up on the flats and trigger a hot bite. When fishing is slow, Capt. Gaines recommends patience, as seemingly out of nowhere baitfish can suddenly flood the flats, followed by frenzied striped bass devouring practically everything they come across.

Depths in most areas on the skinny-water flats range from 1 to 4 feet. There are 8- to 20-foot channels across the northern end of the flats, and along the eastern and western sides. Use the channels to reach the general areas of the flats you want to fish. When you’re ready to move into the shallow water, slow down, raise the motor a little, and keep an eye on the depthfinder as you carefully leave the channel and move onto the shallow flats.

Search out ditches and trenches on the flats where the depth dips down to 5 to 8 feet. When the depthfinder shows an increase in water depth, motor around very slowly with one eye on the depthfinder to determine the exact location of the deepest water in the trench, and the edges from shallow to deep. Move the boat just outside of the trench but still in casting range of the deepest water in the trench, and slip the anchor over the side. Be stealthy when fishing ditches; it doesn’t take much motor noise or commotion in the boat to spook stripers in water this shallow.

Herring, hickory shad and hungry striped bass use the depressions to move over the flats into the rivers in mid to late April. Three particularly productive ditches recommended by Gaines are located just south of the mouth of the Susquehanna River near the top of the flats. The ditches run north-south and are one mile to 1-1/2 miles long. For big, loner fish, work edges of ditches,” Gaines said, “with topwater baits or big spoons, especially on cloudy and overcast days.”

At the southern end of the flats, fish 8- to 10-foot depths between Battery Light and Turkey Point. White perch caught on small hooks baited with night crawlers or bloodworms are very productive striped bass baits at this location.

A spinning rod and reel loaded with 17- to 20-pound mono or braided line, with a 3-foot, 50-pound fluorocarbon leader, is the standard striper set up for casting artificials on Susquehanna Flats. While we all enjoy battling big stripers on relatively light spinning tackle, be sure the rod is sturdy enough to exert adequate pressure on hooked fish so they can be brought to boatside, carefully unhooked and quickly photographed and released unharmed, as required by law.

While it is illegal to fish eels on the flats in the spring, anglers use 11-inch plastic Hogy eels to hook big stripers.

When planning a trip to Susquehanna Flats, keep an eye on the weather forecast. Heavy rain and muddy water are the nemeses of springtime fishing on the flats. In addition, during and immediately following a heavy rain, the spillgates at Conowingo Dam may be opened, which pours muddy water onto the flats and ruins fishing for a couple of
days.