The details are a little foggy, but it was October, a long, long time ago.  The Montauk striper run was at its peak; I know, because I was there. Large cow bass blitzing the beaches was a pretty regular sight, and any one of them would have made for a lasting memory, a story to tell for generations.  But – for me – one in particular, stands out from all the rest.

The fishing was amazing that year and Montauk was at the center of it all. It was so good, so addicting, that many anglers lost jobs, strained marriages and sapped their savings…all to chase the fall run of striped bass. It was just that good.

So on this particular fall day, The Fisherman’s owner at the time, my friend the late Rich Reina Sr. and his family invited the entire Long Island staff to attend his daughter’s wedding at the posh Gurney’s Inn. It was sure to be a grand event. Gurney’s rooms were a little too rich for our blood, so Fred Golofaro, Tom Melton, and a few others stayed at the more economical Royal Atlantic Motel in town, which was also right on prime beachfront.

We packed out our surf rigs, roofs adorned with Lamiglas GSBs sporting PENN 706Z reels. Along with our waders and tops, we packed dress suits, slacks, shirts and ties and good shoes thrown in a bag for the wedding. Not being suit guys I think we all forgot belts, which is funny because not one of us forgot our wader belt.

We arrived a few days before the wedding and enjoyed some incredible fishing. But on the morning of the wedding, on the beach in front of the Royal Atlantic, madness took over. The beach exploded with big fish as our Team Fisherman crew got into fish in the 30s and into the 40s.  The surf had swept to the west and after a while the cows paraded that way as well.  Time went fast and before we knew it was time to get cleaned up for the wedding.

The hum of our oversized 4×4 tires announced our entrance into the Gurney’s parking lot. Beamers and Benz’s are the usual there and the surf rods on our rooftops raised a flag for Gurney’s security who rushed over to check us out.  I’m sure it must have been a surprise for them to see us all dressed up in our Sunday Best. “We’re here for the Reina wedding,” got us past security and we were off to the cocktail party on the beautiful veranda.

It was a crisp, clear afternoon as we sipped cocktails (Fred liked a piña colada on occasion) overlooking the beach from the deck. You could see for quite a few miles, south, east and west, but our eyes – especially Fred’s – were glued to the east, looking toward the site of the Royal Atlantic Motel blitz earlier that day.  “Those fish will be here,” Fred kept saying, implying that we were sure to get another shot at them. The rest of us assured Fred that we absolutely would not be getting another shot at them, because we were at the boss’s daughter’s wedding and in suits and slacks! Even if the fish arrived what were we really going to do about it? 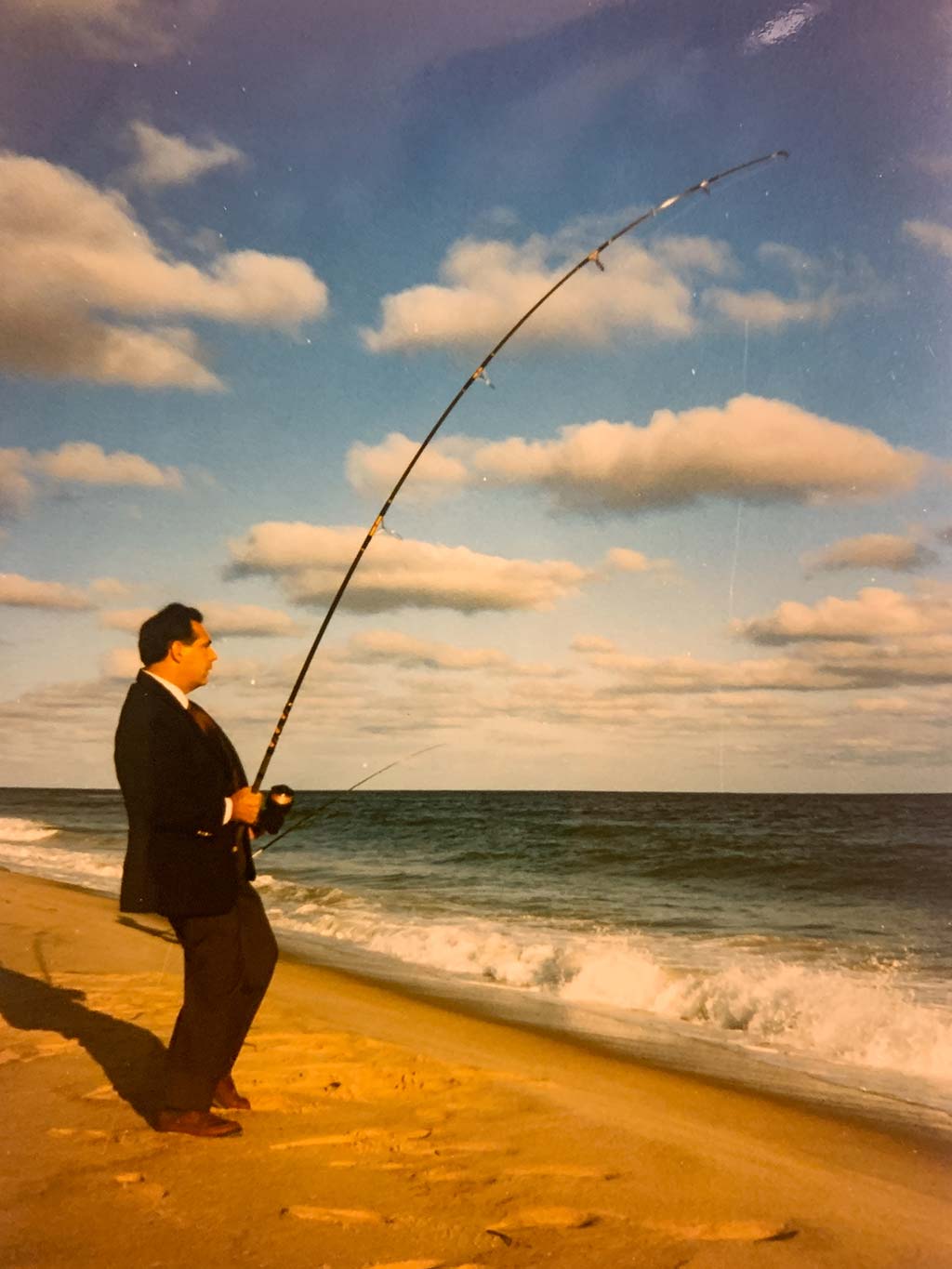 Like I said, many a good job was lost due to the passion for striped bass fishing. Surely an intervention was in order if those fish did show.  Cocktail hour transitioned into the first course, and Fred was still out on the veranda peering east with a new level of urgency. A large flock of birds was now in sight and moving in our direction. As salad transitioned to the pasta course, a few of us got up to join Fred outside for a peek.  Intervention time had arrived.

From the deck high atop the bluff at Gurney’s, it was clear that the fish under those birds were big. I remember Melton began to stutter a bit, while Fred became even quieter than normal. Other wedding guests got up to see what the commotion was about, soon followed by the father of the bride.  Fred had the look of a puppy begging for treat, but he was far too respectful to even imply he wished to leave his boss’s daughter’s wedding for a few casts along the beach.  To everyone’s amazement, Rich Sr., an accomplished angler in own right, seemed to understand.  “Are you just gonna stand here and sip that colada?! Get out there boys!”

Fred and Tom wasted no time, running to their trucks to grab rods and surf bags for the trek down the stairs to the beach.  They removed their loafers and socks, each tied on a pencil, and suddenly these well-dressed men became boys, hooking into stripers along the beach.  The sight of these men in suits fighting fish is forever etched into my memory and still makes me laugh to this day. Their slacks were too tight, hair too perfectly combed, fishing the beach in collars and ties; honestly, it was surreal. There was another surfcaster on the beach who wasn’t part of the wedding that helped unhook and release each of their fish so they wouldn’t get slimed up.  He was cracking up the whole time.

Most of the wedding guests were now out on the veranda, many seeing their very first striper blitz.  I could tell that they were amazed.  But what those people really witnessed was a truly unique demonstration of the lengths to which some casters will go to satisfy that passion for striped bass. And there was Fred, in the middle of it all, doing what he did best. 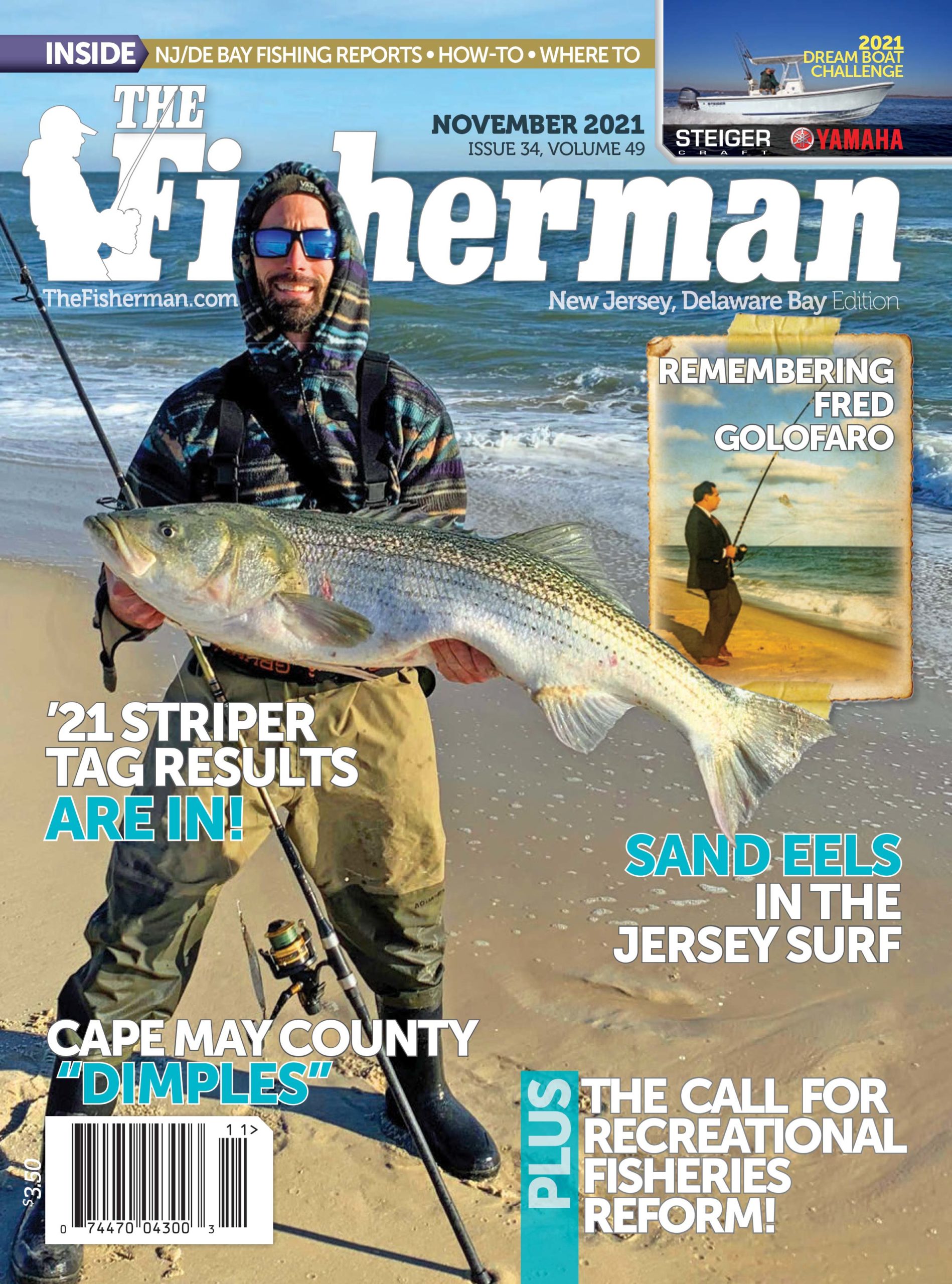 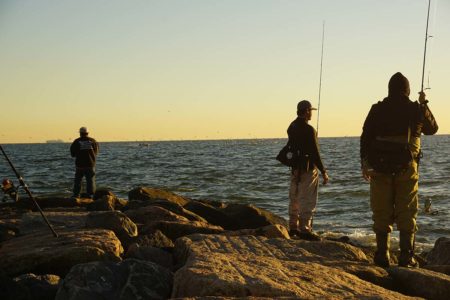