In 1871 the U.S. government officially formed the Life-Saving Service and placed its administration into the capable hands of a man named Sumner Increase Kimball and a host of lighthouse keepers and “surfmen” along the coastal United States.  You might occasionally hear a 21st century surfcaster refer to himself and his buddies as “surfmen” but the original 19th century surfmen would row, not cast, into the teeth of angry nor’easters.  And not for fish mind you, but for life and limb.

The Coast Guard has a motto, “You have to go out, but you do not have to come back.” According to an eyewitness account, on December 4, 1886, Capt. Christopher Ludlam of the Hereford Inlet lighthouse (Li-Ho) in New Jersey uttered very similar words during a raging nor’easter that left a lime-laden schooner out of Rockland, ME called the DH Ingraham foundering along the North Bar at Hereford Inlet.

In an 1888 letter to S.I. Kimball, Li-Ho keeper Freeling H. Hewitt said Capt. Ludlam had assembled his crew on the beach after the Virginia-bound schooner had run aground about a mile and a half from the lighthouse at around 10:30 p.m. during a northeast snowstorm.  “Boys we have a bad job ahead of us, the sooner we get-at-it the sooner it will be done,” Capt. Ludlam told his Life Saving Station (LSS) crew as per Hewitt’s recounting of the evening’s events.

“Not a man faltered but went to work with a will showing by their actions that they were intent on saving the crew of the wreck although conscious that any miscalculation or missed strokes at oar would prove fatal to the whole LSS crew,” Hewitt wrote in his letter to Kimball. “Soon after launching the wind increased in fury and snow to a blinding storm only being able to see torch of wreck at intervals.”

Guided only by a torch, the Hereford surfmen reached the burning and sinking vessel, taking the Ingraham’s captain and four crew members onboard their surf boat with only minutes to spare.  “At 1 a.m. on December 5, the surf boat reached our beach and the rescued crew were soon at the station where they received proper attention,” Hewitt said, describing the Ingraham as subsequently driven across the bar and sunk.

The New York Herald later ran a letter from the Ingraham’s skipper, Capt. James Mullen, on behalf of his crew that was saved that frigid evening off the Cape May County coast.

“As our striking so far off the beach, about a mile and a half, we could scarcely expect the life-saving crew to come to our assistance before daylight; but Captain Ludlam, seeing our pitch and oakum torches burning, and knowing our perilous position, was equal to the occasion, and after a hard row of two hours succeeded in coming alongside and taking us off the vessel, which was on fire,” Capt. Mullen wrote. “Realizing that an hour’s delay would have compelled us to take to our own small yawl-boat we can never forget the brave deed of this captain and crew.”

This past Christmas, a ghost emerged from the surf at Stone Harbor, just north of Hereford, the skeletal remains of what some historians believe could be the wreck of the DH Ingraham released from the shifting South Jersey shoals almost 132 years to the day of her final breath.  I’d hoped to visit the wreck before the sea officially reclaimed her again, or better yet before beachcombers made off with the last of her exposed wooden bits as souvenirs.

Yet sitting in my study on December 28, a driving rain against the windows and 40-knot wind gusts whipping the ocean to a frenzy, I dreaded the thought of walking to the mailbox much less traipsing along the storm-swept beaches of Stone Harbor.

Thinking of those old surfmen and the conditions they’d endured, that stormy Friday morning I pulled out the old silver medal awarded to my great-great grandfather Hildreth 130 years prior –given to me by my grandmother just before her own passing in December of 2008 – and toasted the spirits of those brave souls who have gone out in any conditions, knowing full well they might never come back again. 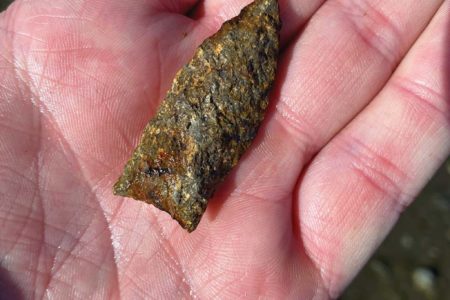