Opening days of fishing and hunting seasons are often steeped in tradition and celebrated by outdoorsmen across the country in their own unique ways. Many of these annual outings have been passed down from generation to generation. Like creatures of habit, groups return to the same places at the same times each year, largely out of nostalgia and respect to those who introduced them to these rituals.

There will always be anglers that avoid opening day like the plague due to crowds. Still, most in the fishing community take the occasion for what it is and welcome it with open arms. The trout opener, more than any other fishing season I’ve encountered, seems to have the most tradition ingrained in it. Ask almost any trout angler about opening day and they can share fond memories of waking up before dawn on Saturday mornings in April and fishing familiar waters with family or friends.

My buddy Jay and his siblings rendezvous at his parent’s house every opening day for breakfast before fishing together on the East Aspetuck River in southwestern Connecticut. Jay’s dad Ed has been fishing that same river on the same morning since his own father took him for the first time more than 50 years ago. Chad, another friend, rings in each trout season by camping on the banks of the Natchaug River in northeastern Connecticut. Chad’s late father and three uncles started this tradition in 1995 and it has grown into a big family affair with over 15 cousins coming together to celebrate.

Some choose to kick-off trout season with a little friendly competition. At the storied Hitchcock Pool on Connecticut’s West Branch of the Farmington River, opening day marks the annual Riverton Fishing Derby. Now in its 70th year, dozens of anglers line both sides of the river shoulder-to-shoulder in hopes of landing the heaviest trout. The lucky winner gets the coveted grand prize, a hand-stenciled rocking chair from the Hitchcock Chair Company. The derby is a big deal for this riverside village, as local organizations pitch-in to cover trout stocking costs. A hearty breakfast is served for anglers at the Riverton firehouse starting at 4 a.m.

I’m fortunate to be part of a brotherhood that observes Connecticut’s opening of trout season with a long weekend full of camping, fishing, and eating like kings. My Uncle Derrick is the central figure of this particular tradition, one he started on the Farmington River some 40 years ago. When I reached an appropriate age, he brought me into the fray and I have not missed a trip in more than two decades since. His son and a couple life-long friends have since rounded out our tightknit group. Barring the birth of a child or serious health matter, it’s hard to draw up a scenario where any of us would miss this sacrosanct weekend.

During the early years, this trip was something that I circled on the calendar months in advance when local waterbodies were still locked in ice. I’d thoroughly inspect my camping and fishing gear with a fine-toothed comb and have it in a pile in the driveway on the morning of our departure. I remember being called out sick from school and anxiously waiting for my uncle’s old red pickup before squeezing in the middle seat between him and his friend Gino—a transplant from down south that had a heart of gold and mouth of a sailor.

Our final destination was an hour’s drive north on Route 8 to a small state-owned campground right on the river in the town of Barkhamsted. This location was special mostly because the third Friday night of April was the only night of camping allowed there all year. It was a free-for-all with no reservations; campsites were claimed on a first-come first-serve basis. While we were far from the only group that made this annual pilgrimage, we always ensured to be first on scene to claim our usual spot overlooking the deep waters of Whittemore Pool.

The memories from those early years of the tradition never left me—the annual stop at Upcountry Sportfishing to secure our fishing licenses and stock up on flies, the spree at the grocery store to load up on delicacies we normally wouldn’t spring for at home, the late-night shenanigans around the campfire, the first big Farmington trout I hooked (and lost), and the echo of the siren up and down the river valley on Saturday at 6 a.m., signaling to trout anglers that a new season has begun.

As a wide-eyed greenhorn for my first few opening days, I was exposed to food, language, skills, and fishing techniques that a kid from Connecticut in the ‘90s would have a hard time finding anywhere else. At the time I was learning how to fly fish and the cold, swollen waters of the Farmington were not easy proving grounds. I learned quickly not to gauge the success of these trips only by fishing results. Still, my uncle and Gino always seemed to produce spectacular trout, revealing to me what was possible in that river. Eventually I got better in the catching department, yet by then it was easy to see this special weekend was more about camaraderie and enjoying a little escape from the everyday grind.

By its very definition, a tradition is an inherited pattern of behavior. For opening day of trout season, this could mean returning to the same river with the same people on the same weekend every year. However, sometimes change is inevitable and out of one’s control. Our tradition on the Farmington River is no different and has gone through several alterations over the years, none more recognizable than where we camp. While most campers staying at Whittemore Pool that one night a year enjoyed themselves in a respectful manner, a few bad apples ultimately forced the DEEP to shut down this campground for good in 2005.

With our tradition at a crossroads, my uncle turned to a landowner he befriended in the area and gained permission to stay on his 40-acre piece of property a few miles upstream. By proving ourselves good stewards of the land, we’ve since parlayed this one-night stay into a full-fledged long weekend of three nights and four days. It may not be right on the river anymore—it’s actually a rocky shooting range shouting distance from Route 8—but it’s become home to us and we’re happy to return every April. In the end, it doesn’t really matter where we camp and reminds me of the Dave Matthews Band lyrics, “Turns out not where but who you’re with that really matters.”

From an angling standpoint, part of the allure of the trout opener is being able to once again fish waters that have been closed for months. For those that have been returning to the same river, stream, lake, or pond year after year, it’s like seeing an old friend—even if it’s the only time you get there all season. For Farmington River anglers, a regulation change in 2012 expanded the year-round catch and release area to an impressive 20-plus mile stretch. This was an important step by DEEP in increasing ‘off-season’ angling opportunities and improving the quality of trout in the river. A companion result of the regulation change effectively made opening day on the Farmington a moot point. Other than the section around Hitchcock Pool, anglers can fish anywhere on the river all year long within posted regulations. This makes the trout opener on this waterway, for the most part, symbolic.

Perhaps the most significant change for Connecticut’s opening day came in 2015, when DEEP officially moved the date up a week from the third to the second Saturday in April. This decision added an additional week of fishing opportunities for both resident and non-resident anglers targeting trout or other species found in trout waters. Our group discussed whether or not to honor the new date or stick to our roots. It turns out old habits die hard, as a unanimous decision was made to keep the traditional weekend. For all intents and purposes, we now observe opening day a week late on a river with no closed season.

The more things change, the more they stay the same. Sights and sounds from opening day weekend like the chorus of peeper frogs, humming of Coleman lanterns, smell of bacon wafting from cast iron, swigging whiskey from tin cups, hanging waders from tree limbs, rigging fly rods on tailgates, whittling walking sticks in camp chairs, enjoying cigars on the riverbank, cooking rib eyes over an open fire, rehashing the same stories that’ve been told for years, feeling the tug of that first trout of the season—these are things that I’m thankful haven’t changed.

Now closer to 40 than 30, on the inside I’m still that excited kid making mental notes every year of opening day months in advance. While the world seems a lot smaller since those early years, in a way it still feels like we’re cut off from the rest of civilization while fishing and camping that long weekend. A temporary reprieve from a mountain of responsibilities at home and at work. Life gets in the way and people pass on, but it’s paramount to keep traditions alive. Our group will keep returning to the Farmington River that third weekend in April as long as we are physically able to do so. Celebrating each opening day like it’s our last and passing down the tradition to our kids and their kids along the way. 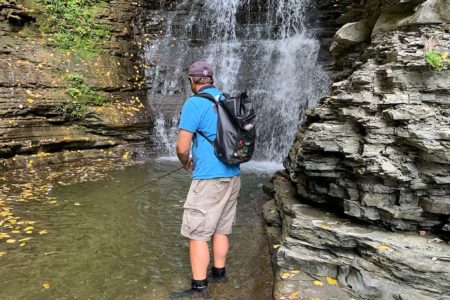