Despite being a saltwater enthusiast, I’ve found myself returning to childhood roots on the freshwater scene over the last few years. In moments of reflection, I realized that I fished so hard and frequently in the bays, rivers and ocean for the last 25 years that freshwater angling became almost new to me again. And not to be undervalued in the equation is the fact that both my young sons are great partners in these adventures.

It started with largemouth, carp, catfish and pickerel. Then the pandemic cranked up in March of 2020 and the local stockings of trout became a neat and successful target for which I’m grateful to the state. I found myself talking to Fisherman field editor and freshwater friend Tom Pagliaroli about tactics I hadn’t used since I was a youngster – or never before – while simultaneously enjoying my “re-education” of the sweetwater. It was a blast and invigorating to mix freshwater with saltwater outings.

Then camping was opened up by the New Jersey government, and my boys and I took that opportunity to go on a fistful of trips in several mountain ranges. We hiked, biked, canoed, ziplined, tubed – and we fished! There were a lot of successes, in addition to moments of frustration; but most importantly, there were a lot of trout!

Before even embarking, the initial steps in the process were researching what streams held wild trout near the campgrounds we stayed at. I used the internet, books and discussions with friends; interestingly enough, while web sources like YouTube exposed some neat, top-notch places, there were far more bodies of water with zero internet presence. Entire trout streams exist with no online mention.

I must admit, it’s kind of refreshing to see not everything is splashed all over the world wide net. Overall, the balance of what has received some sort of fanfare versus what’s completely in the dark seems reasonable and allows anglers a list of waters that definitely contain trout and others needing full exploration.

As we hiked each stream over the summer and fall of 2020, it became abundantly clear that many had amazing waterfalls. In fact, we began to travel to waterfalls as the primary destination. I instantly recognized that combining a waterfall hike with trout fishing could really provide the entire family some fun. What’s more, the hybrid, family-style of fishing while hiking falls opened up doors for the four of us to spend time together on the days my wife joined in the fun.  We also found that some waterfalls were huge tourist spots and allowed fishing, while others prohibited angling. Much of that depends on which state you are in and whether the waterfalls exist on public or private territory.

Giant, cascading falls of over 100 feet created the deepest and widest pools of water. Most spots that I fished in New Jersey, Pennsylvania and New York all contained brook, brown or rainbow trout. I didn’t encounter huge specimens, but they there were almost always fish present and the size of the pools allowed for a larger quantity of fish to be present. I caught some fish up to 15 inches in length, but most still ranged 5 to 10 inches.

My first casts were always to where the falls struck the water below. That foamy, tumultuous collision of water invariably held trout! Whether the highly oxygenated water, the ambush positions created by clouds of bubbles created by the currents, or the power of the falls that disorient any forage prey, there are many reasons why trout may stage at the base.  I would cast from either side and toward the dead center of the falls and had success from each angle. I also had more than a few snags in these locations because giant tree limbs that came over the waterfall sometimes deposited themselves at the base and out of sight.

My secondary casts were aimed to areas of near the falls that were least disturbed by a human presence. If a side had difficult land access for hikers, it also made me want to get a line over there promptly. An example would be an unpassable rocky cliff with zero footing for human traffic.

It’s important to remember that many falls are local treasures that weren’t as crowded in years past.  They have often served as swimming holes and hang-outs for ions, so if I wanted to fish without someone cliff-jumping into the deep spots or posing for social media within the falls themselves, I learned that early morning was the ticket. Often I’d set out in the dark and was on the scene while my family slept for an extra hour or two at the campsite on select days.

The same streams and waterways that have larger, tourist-worthy falls often contain smaller ones up or downstream. Still other streams contain only small waterfalls and nothing of substantial size.  Each waterway is different.  And at the base of many of the falls there are smaller pools, albeit big enough to hold some trout. Smaller pools may be 2 to 10 feet deep, and the gin clear water can make it difficult to assess the depth with the naked eye.

Approaching these pools requires stealth as many trout will be out in the open waters if there haven’t been people around. I try to come up with a plan as I’m walking up; that plan often includes lowering my height and crouching or literally trying to blend in with trees and boulders that are off the side.  When I say blend, I mean to position myself as if I’m part of the object. If approaching by streambed, I certainly don’t want to splash even when far away.

Casting upstream from a downstream position is favored by many, but sometimes hikes allow work in the reverse direction for accessibility reasons in entirety. In either case, emphasis continues to be on a sneaky, undetected approach as trout will see and feel your presence, costing you the opportunity to score.  Casting from side angles is a safe bet for success if doable. Steep gorges, rock walls or thick brush can make access difficult or downright impossible.

The origin of many falls were part of glacial presence and withdrawal that involved millions of years of natural evolution. Gorges and trenches were carved via erosion processes while immense rock formations and enormous boulders were strewn randomly about and dropped in streambeds like marbles on your living room carpet. Entering a gorge with waterfalls from below is usually the easiest since it’s at the lowest elevation and the geography gets more intense as the hike ascends.

When access to the stream above some of the falls offers no clear entry, it can be difficult or even impossible to access.  Steep inclines and treacherous footing require experience and judgement. If it’s dangerous or a spill is possible, it’s not worth the peril. Perhaps there is another way to access the area without hazard.  This past summer, I made long, flanking walks in order to get to get to waters I desired. It took some bushwhacking and extra hiking, but it was worth it for a several stream falls.

Not every waterfall was created during the ice age. Fallen timber laid out horizontally across a stream bed makes for a small cascade that will hold trout in the bubbles. After hurricanes and storms, rotten and dead trees commonly fall across brooks and create this same effect. Actually, it makes for a more strenuous fishing hike if there’s a lot of lumber laid about as it can be extremely difficult to traverse under and over it. But fallen trees also reduce pressure on the fish if there are enough obstacles that require ample fitness levels, flexibility and agility. The horizontal lumber is so effective at creating trout pools, that some fishing clubs and organizations vested in local streams may strategically place the logs in the right sections. Other additions to featureless streams include boulders, rock and occasionally concrete.

As a light tackle, spin angler, I worked diligently to reel my presentations at the proper speed. This definitely took some trial and error in order to see which retrieves drew strikes or even follows. When I went on good runs with many consecutive trout catches, I think it was due to the speed of the presentation; when humbled by missed hit after hit while falling in a rut, I questioned the speed of the retrieve. In general, the “not too slow, not too fast” philosophy worked when tossing Johnson Sprite spoons or Johnson Min-O-Spin rooster tails in the 1/16- to 1/8-ounce weight class. The blades turn better and are more enticing when reeling into the current.

When reeling the presentation directly with the current from a downstream position, I didn’t need to turn the handle as much. The blades don’t spin as well; however, the look of the bait flowing down the stream has a natural appearance to it that could be similar to a downed fly or bug being flushed over the falls or a nymph chilling near the base of a cascade. Often, I changed to a Trout Killer in this scenario and let the brook’s flow carry it downstream with me jigging and twitching along the way.

Although each waterfall waterway and region has its own rules, and some allow for the use of live bait, I did not use any live offerings this past summer even when I could have. I surmise that small worms would have worked very well on tiny #10 to #14 hooks. Likewise, I did not fly fish, but I’m sure properly place flies at the base of the falls and twitched through the strike zone would have nailed many brook, brown and rainbow trout.

There were times that I positioned myself behind a boulder or tree where I wouldn’t cast, but rather rocked my lure into the strike zone and dangled it on the surface in order to mimic an injured bug. When no bite took place, I would jig, twitch or swim the offering till a trout darted from its cover to inhale the bait in effort take it back to hiding spot. I was discussing this with Tom P. and he exclaimed, “You’re dapping Skipper Newhall!” Indeed, I was using the fly rod technique with spin tackle.

The Rack N Fin Radio host told me that sometimes he literally had to crawl to the right perches in order to use the technique without being spotted by the fish. Dapping doesn’t require much reeling since there is no casting, and capture is taken via net or gently lifted to the hands for release. In any case, the tactic is extremely effective at small waterfalls with cover and surfaces for the angler to present bait in this fashion.

Fishing falls fit any scenario on camping getaways and provide a scenic, sometimes misty backdrop amongst glacial leftovers that make for an inspiring and often educational outing when pause is taken to reflect on when, what and how the geographical wonders came to existence. 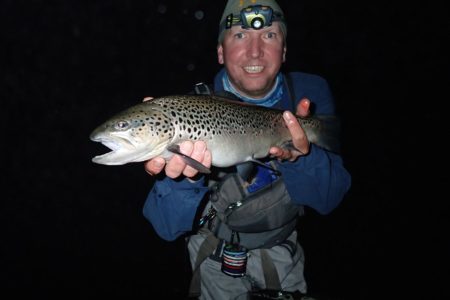