Do you remember the first time you saw a blowfish? I do! I was 8 years old and my friend and I were doing some towel fishing. If you have never heard of towel fishing, it goes like this. You and a buddy grab an end of a towel, then drag it along the bottom, scooping up small fish. At 8, you then put the little fish in a cup and see how many different ones you catch. On one drag, we caught a tiny blowfish. When we took it out of the towel it puffed up and we dropped it back in the water as we had never seen anything like that.

Fast forward to today, 53 years later, and I still remember it well, and still remember how much fun they were when I was a kid. At 10, I would catch them off the Bay Shore Marina Dock using whatever bait I had that day – clams, squid, a piece of chicken, worms, whatever. They would eat anything and it did not matter what the tide was or what time of day.

Still Fun…And They Are Back

Last year was the first good run of blowfish in Great South and Moriches bays in years. In fact, they were so plentiful last year, kids of all ages got in on the fun. Reports of great tasting “Chicken of the Sea” were once again prominent.

This year, they are already in the mix, with anglers landing jumbo blowfish in Great South Bay as early as mid-May. In Moriches, they were there by the end of May, and in good numbers.

The way I see it, they have made a great comeback, but before we get into how and where to catch them, let’s think about conservation first. Currently there are no regulations on blowfish recreationally or commercially. But think about it, if we take any and all sizes, how long do you think it will be before they disappear again?

If you head out to catch some of the little puffers, keep a handful for the table, and release the rest to swim and breed for next year’s crop. A little saving now will go a long way in keeping blowfish around for years to come. The positive note is they spawn from May through August in shallow waters, which is a long spawning period.

Simple To Find And Catch

As I said earlier, blowfish will eat just about anything you put on a hook. The preferred three baits however are clams, squid and worms, all of which in my opinion will work equally well. Add a chum pot filled with clam chum if you are fishing from a boat, and you can get them feeding pretty quickly.

I have seen guys this year from Sag Harbor to Great South Bay fishing from the shore and catching, so don’t feel you need a boat to score. Blowfish are just as plentiful for the shorebound angler as well as they are for boaters. One of the hottest two areas early on this year has been the Tanner Park Pier and Captree Overlook Dock. I am sure Bay Shore Marina in Great South and the pier inside Smiths Point Park are also holding them.

Blowfish, or northern puffer, is found in bays, estuaries and protected coastal waters, and can range from 5 feet of water up to very deep ocean waters. In our area, you will find them in 10 feet of water or less for the most part. Last year I had blowfish at the mouth of Heckscher State Park, near the OBI rocks, Narrow Bay and Tuthill Cove in Moriches, plus had numerous reports from other areas on the North and South shores. What I found effective last year was finding a slightly deeper hole then the average water depth in the area. For example, if the water depth is averaging 4 to 6 feet, find a hole from 8 to 10 feet deep. Anchor up, drop the chum pot and go to work.

You do not need to get exotic on the tackle end. A basic light action spinning rod of 6 to 6-1/2 feet rated for 8- to 15-pound line is fine. Match this rod with a spinning reel in the 2500 to 300 size range. On the line end, simple mono is fine, however I prefer 10-pound test braid, with a trace of 8-pound test leader material – fluorocarbon or mono. I like this line set-up as there have been weakfish in the same haunts, so having the ability to quickly throw on a soft plastic for the weakfish is easier. Standard size 6 porgy hooks are fine, and you want to have a two-hook rig. These bait stealers will make quick work of your bait, so set the hook quickly. On the sinker end, depending on current and tide, you may use from 1 to 3 ounces, but last year I found most times 1-ounce was adequate. Fishing the light braid also reduced the need for heavier sinkers.

One last note before we let you hit the water and get in on the action. Northern puffers, a.k.a. blowfish are not poisonous. Their flesh is quite tasty, and makes for a delicious meal. They are also quite easy to clean. Simply take a sharp fillet knife and make one cut straight down just behind the head. Flip the blowfish over, hold the exposed flesh with the back side of the knife and pull the head, guts and skin right off the meat.

Blowfish are back in our bays and are one of the most accommodating fish in our waters. They are easy to catch and are the perfect target for kids, or those adult kids that used to love to catch them. And, don’t be surprised if while you are catching blowfish, kingfish and weakfish are in the mix as well. 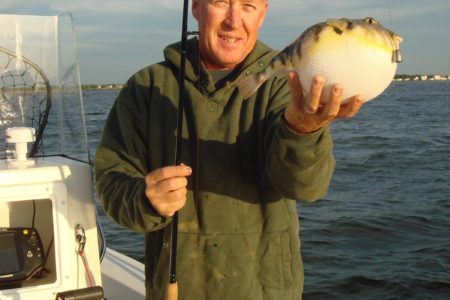 Get Slick & Bring Your Chum

If you like variety, a chum slick is the way to go this month.