The drag on a reel is responsible for exerting constant pressure on a fish to wear it down.

Each season sees some true heartbreak scenarios on both the inshore and offshore grounds as anything from monster fluke to giant bluefin tuna will make that final lunge for dear life just out of reach of the net or harpoon often becoming victorious in battle as that last dash for freedom is achieved due to the rod being in the hands of an inexperienced angler, or worse yet, a sticky or frozen drag that causes the line to break.

As for the novice angler, we’re all human and it’s a lesson learned, however as for the latter, it could have and should have been prevented if a bit of TLC and going over a few checkpoints before putting the reel to work. Therefore in the paragraphs ahead, here are some elementary steps to keep those reels running smooth and working properly to do what it has been designed to do.

A drag system can be compared to a brake system, designed to keep enough resistance and tension to the fishing line to keep it from breaking, usually at the weakest knot. Most drag systems consist of a series of washers and pads, which are pressed on the spool. Various materials and designs are employed by different manufacturers including the quality, quantity, and positioning of the washers and pads on a particular reel.

Fly, baitcasters, spinning, and conventional reels have their own type of drag system, however, they all work on the same principle. If you tighten the drag all the way, the spool doesn’t give at all, sort of like tying your boat line to the dock. Loosen it all the way and the line will pour freely off the spool. Tightening a drag presses down on a brake plate, which tightens a series of washers, increasing the pressure in tiny increments. This tension slows the rate of the line coming off the spool. 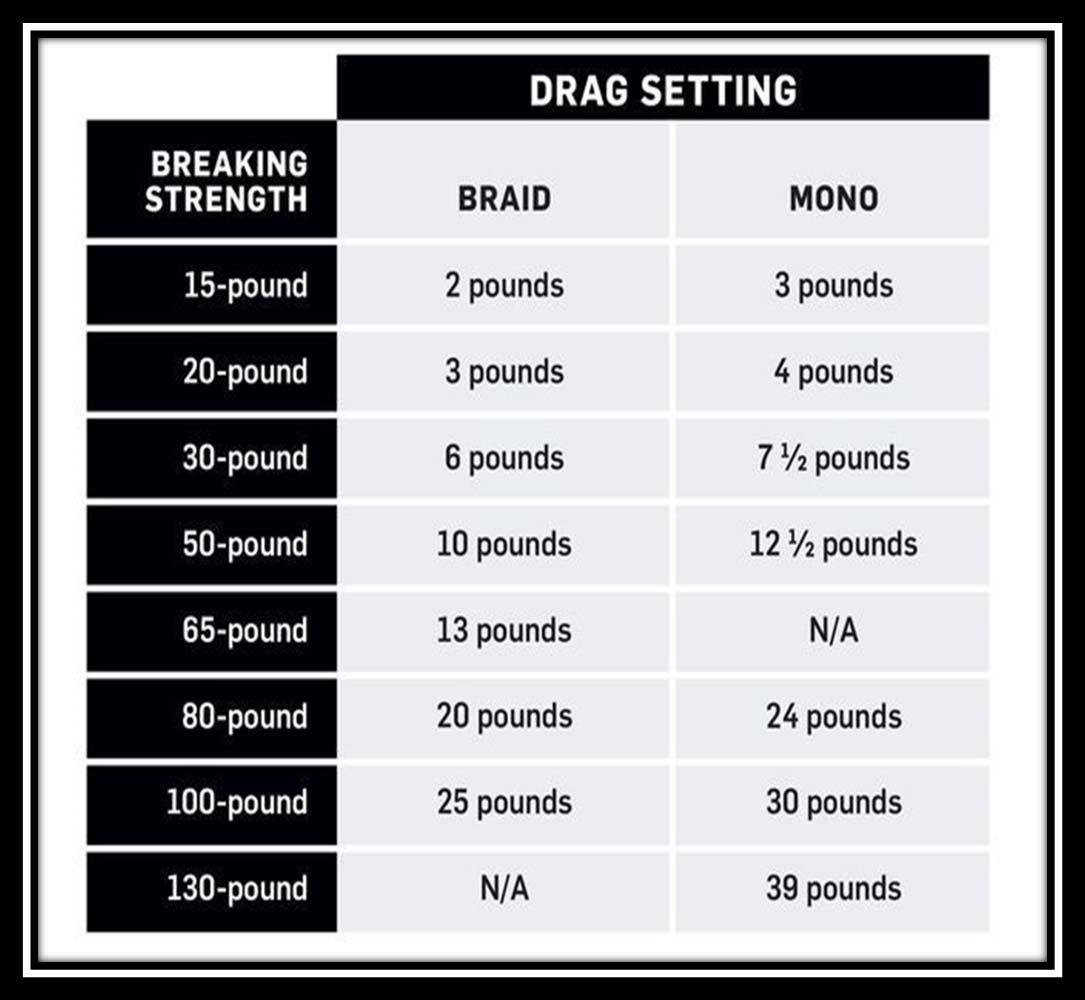 Pressing Down On Pressure

Applying just the right amount of pressure while battling the quarry is paramount to consistently land quality fish. Basically, a drag is positioned so it presses against a series of washers and pads, which creates resistance on the spool. Drag materials and construction differ greatly, so it’s best to match the drag to the fish you target. The type of drag washers used in a reel is one of the factors when it comes to the cost of the reel. Higher priced reels utilize more expensive materials. Composites drag washers are much less in price than the considerably better carbon fiber. The composite systems work well out of the box, but don’t live as long as the carbon washer system. The simple solution is to switch out the washers for carbon fiber if you plan to put the reel through repeated use under extreme pressure. If you don’t push the reel to the max, composite may serve you fine.

Each of the four reel types has its own type of drag system, however each work on the same principle, which tightens the drag to the max, and the spool doesn’t give way, whereas loosening the drag as much as it allows and the line will peel off the spool, or in cases of most spinning reels, the spools are removable, making access to the washers and pads an easy task. Most spinning reels have a metal and carbon washer behind the knob in front of the spool, and a series of pads and washers’ position on the main shaft and inside the spool which slides down the main shaft. This is how many spinning systems work, by tightening a series of washers, increasing the pressure in tiny increments. This tension slows the rate, then the line coming off the spool.

The drag on a reel is responsible for exerting constant pressure on a fish to wear it down. Also, the drag acts as a buffer to prevent tension from reaching the breaking point of the fishing line and terminal tackle, such as hooks, swivels, and the hardware on plugs and other lures. Many anglers estimate their drag setting by pulling line off a reel by hand to gauge the tension, but unless you’ve developed that touch that comes from years of experience over years of fishing, a spring or digital scale is relevant to properly adjust the desired drag setting before you begin fishing.

It is crucial to be aware when gauging the drag tension by hand without a scale that the pressure at the tip of the rod is significantly different than at the seat of the rod, which will often throw a curveball at those who don’t “scale the drag”, often resulting in an angler being caught off guard.  Scaling the drag requires a bit of a helping hand one person holding the scale, while the other person attaches the line to the scale, pointing the rod tip directly up (with no bend). Ask your helper to pull the scale back slowly and steadily, calling out the reading until the scale shows the desired percentage of the fishing line’s breaking strength.

Drag Settings For Braid And Mono

Before the birth of super braids, monofilament ruled the roost with the drag-setting standards developed around the use of mono, which stretches as much as 25 percent. While that stretch somewhat hinders hook-setting and the detection of subtle bites, especially when fishing in deep water, it also cushions against the sudden spikes in drag tension that occur when a sizable fish pounces on bait and surges away from the boat, or dock.

Drag settings for braided lines, which lack the stretch of mono, are different. Their near-zero stretch and smaller diameters result in better hooksets, faster sink rates and a much better feel. However the cushion against sudden spikes in tension is nonexistent, so lighter drag settings are in order. As a general rule, the proper drag setting for mono lines up to 20-pound-test is 20 percent of the breaking strength of the line. For 30- through 50-pound mono, it’s 25 percent of the breaking strength, and for 80- through 130-pound mono, it’s 30 percent. With braided lines up to 20-pound-test, set the drag at 15 percent of the line’s breaking strength. With 30- through 65-pound braid, set it at 20 percent. With braid that tests at more than 65 pounds, go with 25 percent.

These are basic guidelines. The right drag setting varies according to fishing conditions. A light drag is a right call when fishing light lines in open water for species such as fluke, weakfish and black back flounder. However, considerably tighter drag is required to keep large stripers, blackfish and sea bass from breaking off on structure when fishing on rocks or over a wreck.

Because of their inaccuracies, major drag-setting adjustments in the heat of a fight often prove costly. If additional pressure is needed to stop or turn a fish, “feather” or “cup” the spool of the reel instead with your hand. You can also pull sideways, bending the rod a little more. Should that fish make a sudden run or jump, the extra pressure is instantly abated by simply removing your hand from the spool and aiming the rod tip in the fish’s direction. Once the fish settles down, reapply the additional pressure to shorten the battle.

The many variables that increase the drag tension during a battle include the resistance of the line, which steadily increases as a fish pulls more line during a long run. The initial drag setting should buy you enough time to give chase and reclaim lost line. However, when fighting a fish from a stationary boat or when a fish won’t slow down, begin backing off the drag to compensate for the increasing pressure on the line. As the fish settles down and you regain a safe amount of line, start tightening the drag little by little, without exceeding the original setting. This is key to remember especially if targeting large fish that take long runs.

Depending on the degree of use and care, dirt, salt, and sand will find their way into the drag system resulting in a sticky or frozen drag, this is usually the reason why most trophy fish or any spirited fish for that fact is the culprit of breaking line and leaders. A fast rinse from a hose sprayer after a day on the water will just not cut it. Once you get the reel home, simple maintenance will help you get many years out of a good drag system.

Start with a light rinse with freshwater while keeping the drag engaged to keep contaminants from seeping into the reel. After the rinsing, tap the rod butt on the ground to shake out any remaining water. Leave the reel engaged until the following day then back off the drag and spin the spool a few turns to knock out any left-over grime. After that, use a damp paper towel to clean all visible areas and a coat of grease to the washers to repel water, which will improve drag performance. Practice this each time and it should carry you right into the annual wintertime tune-up.

Time To Drag It Out

No time is better than wintertime to take those reels apart for a good solid tune-up that will give any drag the smoothness it was designed to perform. When you take the reel apart, lay out the parts on a mat of some sort. Put a strip of masking tape under the line of parts and number each part as you remove it from the reel. That way you’ll be able to put everything back together without having parts leftover. The simple Green cleaner will work fine cleaning all the parts. Avoid using paint thinners or petroleum to remove dirt and grease from the reel’s parts. It will only melt any of the plastics. Simple Green and a toothbrush won’t damage any plastic or fiber components of the reel.

Next, grease the gears by applying grease to the bottom of the teeth, not the top. Applying grease to the tops of the teeth will cause the gears to splatter grease everywhere. A light coating applied with a toothbrush or toothpick is all you need. Next, you need to apply oil to all the steel bearings. Start by cleaning them with lighter fluid to remove all the dirt and grunge that becomes accumulated with usage. Once cleaned, it is paramount to make sure the bearings are spinning, otherwise, you may have to repeat clean them. To keep them spinning throughout the season, one drop per bearing of TG’s Rocket Fuel of medium viscosity applied using a toothpick will keep those steel balls moving.

After the mission is complete and the reel is reassembled, check to make sure the assembly is working the way it should, back the drag off and apply a little Reel Magic to the exterior to protect the finish.

Setting drags on a reel is pretty easy once you know the proper way of doing it. Just remember to loosen all the drag knobs when you get home and wash down the reels with fresh water and allow them to air dry. Releasing the pressure keeps the drag systems working longer and properly. It’s better to tighten them only when needed, like before your first cast. If you get into this habit, you have to remember to re-tighten the drag before that big striped bass comes along.