Play audio file to listen to this feature. 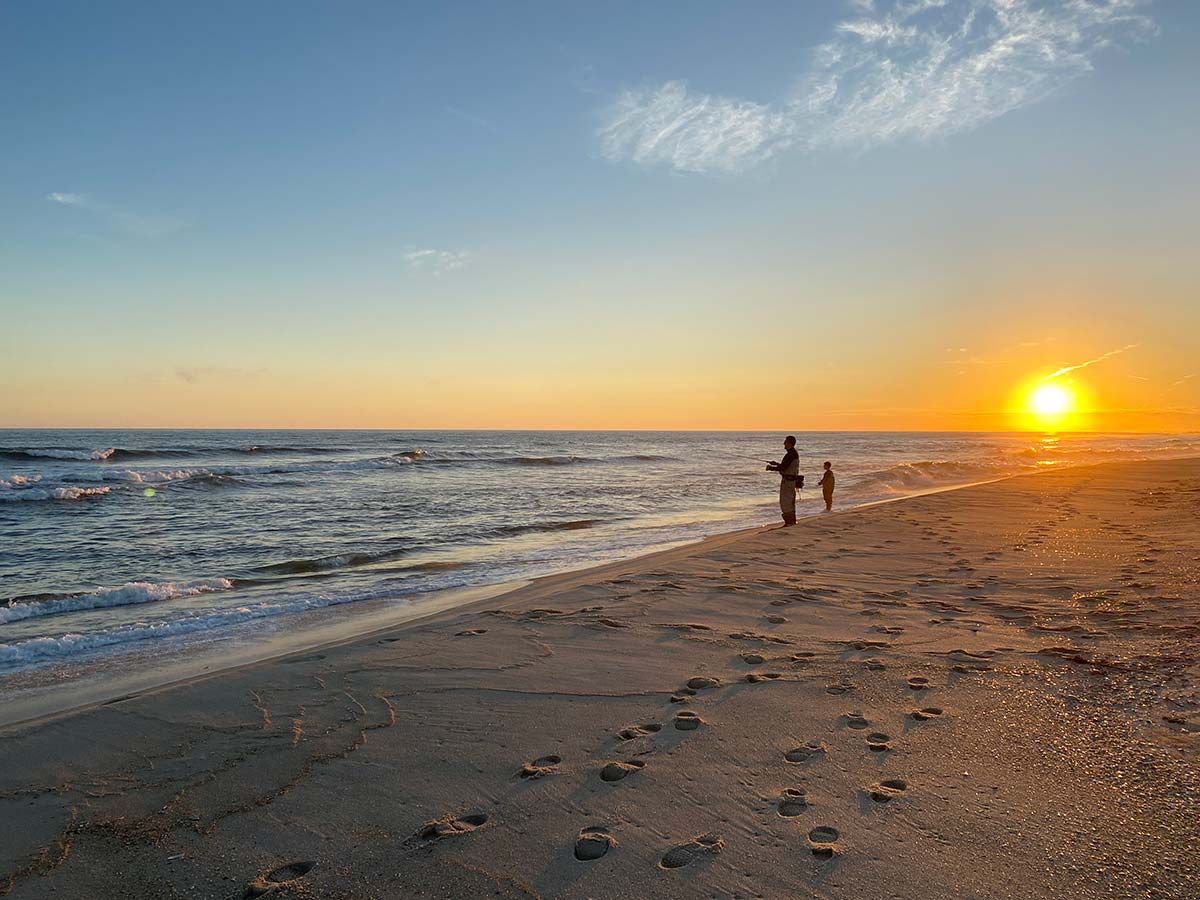 The 2020 season was a tough one. Maybe not from a fishing standpoint but from an everyday living and mingling with society one. This was the year that most things as we know it changed. Some lost loved ones, others went through financial hardships. It’s definitely been a roller coaster of a year for me and many others. Actually most others.

I could say that Covid has had some sort of effect on everyone’s life and we are learning to adapt to it. Hopefully, things get back to the way they were before Covid became a household name. Even though to many it seems like all I do is fish, I did enjoy many other activities besides that. On the bright side, Covid didn’t impact my fishing schedule much and I actually did more fishing because of it. I’m not complaining about that at all.

Additionally with the presence of Covid, I along with many others have noticed a huge increase in the number of anglers all throughout the Island. My only guess is many people were tired of being home indoors and would rather participate in an outside socially-distanced activity. The perfect answer to that activity is fishing. Many people have stuck with it too. They have realized that fishing isn’t just something to do. It’s more than that. Fishing is a stress reliever. It disconnects you from everyday worries and problems. Fishing can be a challenge but a worthy one. The rewards that come with fishing are sometimes unmatchable. Some, including myself will call it a lifestyle. I’m assuming many of you reading this are already into fishing but if not, I suggest you try it. And if you are into it please at least try to introduce someone new into it who hasn’t been exposed to fishing before. I know people who never thought they would like it but in due time they ended up loving it.

This review of the year 2020 begins with me addressing the more controversial thing of 2020 but let’s get away from that and get into the fishing itself. I’ll cover my experiences and hearings from the specific times of the year. Remember this is what I experienced. Everyone’s may be different.

My spring season typically starts out fishing the back bays of Long Island. I’ll usually start poking around in the month of March. Depending on how warm the weather has been determines how soon the fish will become active. I have a few spots that hold fish year round but the first of the migrating fish will hit the western portions of the island around this time.

This year I saw those fish starting to trickle in during late March. Mostly schoolies but slot fish were in the mix too. The fishing was decent during the day as well as after dark. These fish are also very tide influenced so following the tides did benefit me as well. The bulk of my fishing was done with smaller swimming plugs such as SP Minnows, Mag Darters, Bombers and Red Fins. Using soft plastics proved to be beneficial for me as well.

After a few weeks of fishing the western portion of the island and getting my fix, I got back to the home base areas and searched locally. By the end of April, fish are pretty much in my backyard along the central South Shore. Again, the class of fish are mostly schoolies with the occasional slot bass mixed in. The same lures were utilized again.

Now the month of May is where things get interesting for me. It always seems that after the first moon in May a better class of fish start to show up. During this month I usually have a realistic shot of landing a few fish between 30 and 40 pounds. It does not come easy though. I’ll grind all month, hitting precise tides looking for these big racer fish. The size of my plugs goes up. Darters and bottle plugs make their way into my surf bag. Large rubber shads are used around deeper water areas trying to entice large stripers to strike. Like clockwork, these fish did quickly show up in expected areas. Fish over 40 pound were landed in the surf. The array of baitfish these fish feed on consists of bunker, porgies and small fluke. I’m sure they are gobbling up other species along the way but the ones I mentioned are usually what I see hanging out of their mouths after they stuff themselves.

Let’s not forget about the bluefish that show up during this month. The downward trend of bluefish in the spring the past few years seemed to continue in May. Yes, some fish were around but the numbers lacked. They showed up in my typical back bay haunts. Enough fish to keep me busy during daylight hours with topwater plugs but definitely lacking. Let’s hope we start to see an improvement with them. It’s a bit concerning.

Overall May was okay. It had enough big bass and bluefish to keep it interesting for me but it did lack the numbers I was looking for. I had quite a few nights where I came up empty handed.

I grouped late spring and summer together due to the fact that my strategy stays the same during this time of the year. Yes, these are the months I primarily focus on big fish. To give you a better idea this is the beginning of June through July. Again, these months are filled with a lack of sleep, grinding and of course shutouts. All the things that come with targeting big fish. Big plugs and big soft plastics are again making up the bulk of my arsenal. Precision tides and locations are my focus. Confidence is a must going into these times of the year. I have to train myself to think these fish will show up. Luckily they did. The fish during these months for me come in a wide range of sizes. Schoolies with fish over 40 pounds not out of the question at all. When they did stack up on certain tides the fishing was great. Many nights saw quality fish into the 20s and some 30s.

The highlight of this portion of the year was the night my fishing partner Andrea landed his 48-pound bass next to me. This secured his first place win in Bill Wetzel’s Surf Rats Ball Tournament. Truly an incredible thing to witness and even better to see that large cow bass swim away strong. On a side note, that was the largest fish of the year I’ve witnessed and the closest fish to that 50-pound mark I’ve seen in a while from the surf.

July became an interesting month for me. I do like to travel time to time catching bass in different locations. For a couple of years now I’ve made the trip up to Cape Cod Canal for the run. I’ve always missed the good fishing by a day or two. Such a bummer when all I hear the entire trip was “You should have been here yesterday”. Well this year we struck it right and we ended up being the guys saying “You should have been here yesterday”. The night bite was insane with several cow bass being landed by the whole crew. We lost a few beasts to the rocks and one to a seal.

All the night fishing consisted of using heavy 4- and 5-ounce jigs. As daylight came, fish started feeding on top, blasting bait along the rocks. We took our bikes along the bike path until we found a spot away from the crowds. For a couple of hours we had fish up to 30 pounds that morning. I was starting to lose faith in the canal but it was restored on this trip. All the while I learned of the great bite that took place in Montauk too with several large bass being landed. Although I missed out on the more local bite I still cashed in on the Canal one. No complaints from me with that.

As the waters warmed (summer’s Dog Days) the fishing tailed off a little bit. I made a slight change in strategy. The typical June and July spots still produced but in less numbers. Going outside of my comfort zone rewarded my greatly with some quality bass and bluefish on topwater during the dog days of summer. It was nice to keep busy with these fish. I always learn something every time out and this year I certainly learned a lot that will add to my fishing knowledge. I recommend that you all try this. You might be greatly surprised with the results.

While the fall run is still going on as I write this, I still have a good idea of how it’s going. September started out so-so with albies. They stuck around for a little bit but got pushed out rather quickly. The new moon in September was very kind to me. Nothing huge but I hit it right and the numbers were great for me with fish up to 25 pounds. Once again I learned and observed things I will apply in years to come. The closing of September was extremely strong. Some big fish bites took place with fish over 40 pounds being landed. Absolute epic topwater bites were mixed in too. The fish were feeding on bunker and I noticed a lot of fish actually eating full sized needlefish too, which would explain the great nights of fishing with Super Strike Needlefish.

October held strong through most of the month. Sand eels fueled the fishing along the South Shore of Long Island. One thing I observed was the number of newer anglers getting in on the great fishing. Many people landed personal best fish. While these weren’t 40-pound bass, I still saw a number of 20- to 30-pound bass come up. Diamond jigs, bucktails and needlefish did the most damage due to sand eels being the main bait along the surf. Angler’s using teasers cashed in good during certain situations.

A couple of colder nights moved some of these fish off to Jersey but quickly the temperature recovered and good fishing resumed. November is off to a good start as well. While more schoolie bass are cruising the beach, fish over 30 pounds are still being landed in between.

The trend looks good for the rest of November and fish should stick around into December.

While the season had its lows I’m overall happy with it. It was good to see large numbers of bigger fish being caught and released along the beach, something we haven’t seen in a few years. Plenty of small fish are around. These are the future of our fishery. Bluefish are concerning to me. Even though we had them at times, it seems like they were lacking once again in the surf. Going forward I believe that if we continue upon the course of conservation with striped bass we should have a better and brighter fishery for years to come.