It was 3 p.m., quitting time aboard Capt. Brian Rice’s Jersey Devil Sportfishing out of the Navesink River in New Jersey.  Our crew had five good striped bass on the day, from 43 to 48-1/2 inches in length already caught and released, but with the 4 p.m. mandatory dockside return looming in the 20th Manhattan Cup it was time to head for the barn.

“Hey Cap, anyone ever catch fish while reeling in for the day,” said Richie Torres, an Afghanistan war veteran and one of the 29 warrior heroes of the day honored during the annual Manhattan Cup striped bass tournament.  It literally was less than 5 seconds later on that “lines in” when the rod in Torres’ hand buckled over and the drag started to scream.

That turned out to be a buzzer beater fish, one which would tape out to 52 inches in length with a 28-1/2-inch girth on the cockpit floor of Rice’s Contender.  With the boat in gear after the official contest measurement, it took another 3 to 4 minutes until that big fish bit down on my hand a second time before kicking its mighty tail and heading back towards the depths.  For Torres, it was the fish of a lifetime; as for the crew of the Jersey Devil, it would lead to the only repeat championship in the heralded Manhattan Cup catch and release striped bass contest history, a back-to-back ‘chip’ for Rice’s crew. 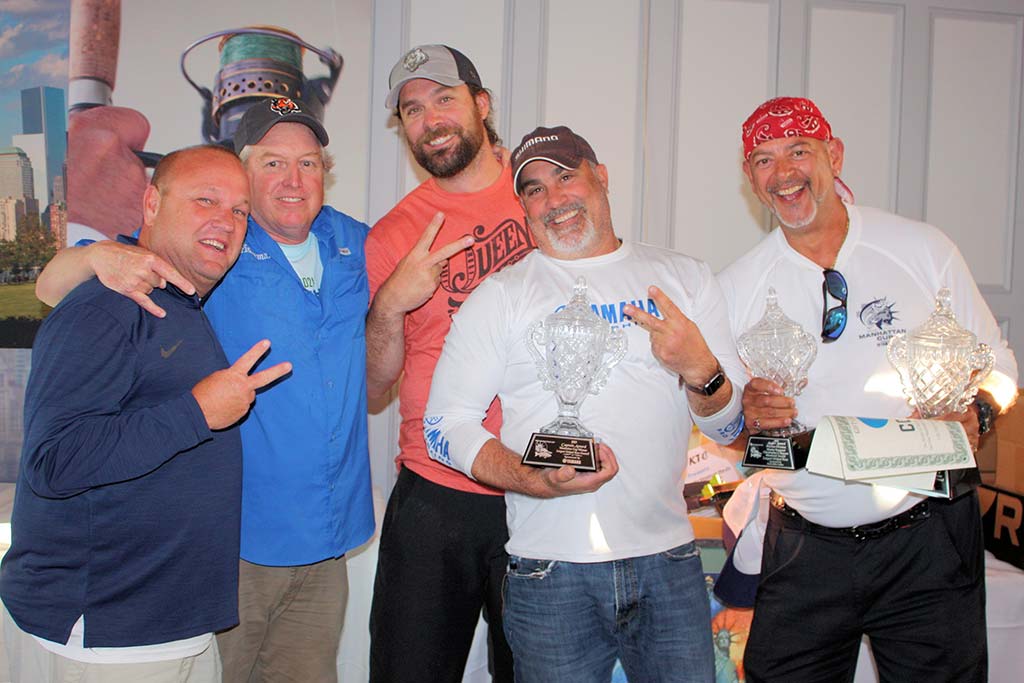 I’ve personally fished this contest about a half-dozen times over the years, but the 2021 event will go down as the most memorable for me.  In addition to our time expiring field goal, it’s one of the few opportunities of the year to fish with my stepbrother, Clark Harris, a 6-foot, 5-inch, 250-pound specimen of a human who flew in late the night before, nearly getting hung up at Cincinnati/Northern Kentucky International Airport due to storms.  A former All Big East tight end at Rutgers University, Clark starts his 12th NFL season as long snapper for the Cincinnati Bengals in the fall and knows a thing or two himself about pressure situations with just seconds left on the clock. Considering organized team practice activities in the spring, summer training camp and a grueling 18-week fall season, he and I don’t get to fish together much these days.

And except for a 2020 pause due to COVID-19, Clark and I have spent 3 years fishing with Capt. Brian and mate Pauly “Walnuts” in this Manhattan classic.  With Ritchie’s Hail Mary fish securing an overall angler award in 2021 – along with tops in the Warrior division – and Clark nabbing his second consecutive Celebrity division win in 2021 for a 48-1/2-inch striper with a 28-1/2-inch girth, it was a pretty good day.  In fact, by IGFA standards (length X girth X girth / by 800), that’s a 52.8- and 49.24-pound of heavyweights on a single trip.

As unbelievable as it may sound, Ritchie’s trophy wasn’t the only ‘50’ in this year’s Manhattan Cup either.  Angler Jim O’Sullivan had a 48-1/2-inch fish aboard Cole Svenson’s Cheap Shot 39, a fatty with a 28-3/4-inch girth that estimated out at 50.11 pounds.  It just made Ritchie’s line-clearing end of the day battle even more dramatic.

“I will never forget this moment,” Ritchie texted later.  An Air Force veteran who did two tours in Afghanistan, Torres was first activated to help at Ground Zero in lower Manhattan on 9/11 and was based out of Stewart Air National Guard Base in Orange County, New York before retiring from the military.  “Life as I know it changed,” Torres said of those early days entering global conflict, representing what the Manhattan Cup is all about.

Fishing is my happy place.  It is my therapy that allows me peace and a way to block out all the negatives in my life,” he said later.

Here’s To The Heroes

The crystal cup for top Warrior that Torres carried out of Liberty Landing Restaurant – one of two actually, the other as top overall Angler of the Cup – was engraved with the name of another great warrior that affects me personally, that of Christopher Raguso.  The 39-year-old Master Sergeant was killed in March of 2018 along with six other heroes when their HH-60 Pave Hawk helicopter crashed in western Iraq.  His father, Capt. John, is the boating and electronics editor at The Fisherman Magazine.

“I have not felt this connected with my fellow veterans in a long, long time,” said Matthew Braiotta, assistant director of U.S Department of Veterans Affairs (VA) who also participated in the Manhattan Cup from out of the VA office in Manhattan.  Braiotta later sent tournament organizers VA New York Regional Office Challenge Coins in appreciation for what he called “extraordinary efforts in putting this event together and personally impacting my life and renewed spirit to go above and beyond for our veterans.”

It was another outstanding Manhattan Cup event, and a truly special day for all.  But from that same personal perspective, it was especially moving for us at The Fisherman. During the awards ceremony, senior editor Fred Golofaro was called to the podium to accept the Manhattan Cup’s prestigious “lifetime achievement” award.  Handed the award by legendary angler/author Al Ristori – a longtime Fisherman contributor himself, alongside former staffer Gary Caputi and Manhattan Cup organizer and good friend Frank Crescitelli, my Long Island editorial mentor addressed the crowd graciously, his voice quivering slightly at one point as he recognized the magnitude of the event, appreciating the honor. Which only brought a tear to my eye, on this, a day that delivered plenty of emotional moments.

With the lower Manhattan skyline standing majestically in our background at Liberty Landing Marina, Ritchie Torres later noted rather poignantly, “I will never forget this moment!”

And neither will I!

At the end of the day-long event, proceeds from the Manhattan Cup will go to help “at-risk” warriors, as well as striped bass conservation through the Fisheries Conservation Trust and support for Gray FishTag Research.  Additionally more than 50 tournament striped bass were tagged with Gray FishTag Research green streamer tags, with Capt. Frank Wagenhoffer and his Fin Chasers crew taking home the popular Gray Taxidermy striped bass mount for most tagged fish and largest average size of fish tagged.  Darlene Jensen, wife of Jim “Crash” Jenson, another NFL player, fishing aboard Capt. Chris Carlino’s Tricky Fish, nabbed the biggest bluefish of the contest in the Celebrity division.

Kudos to Crescitelli, the father of this great event; also to the Recreational Fishing Alliance’s John Depersenaire who along with Caputi and countless volunteers, have helped re-launch this legendary event.  Here’s to 2022! 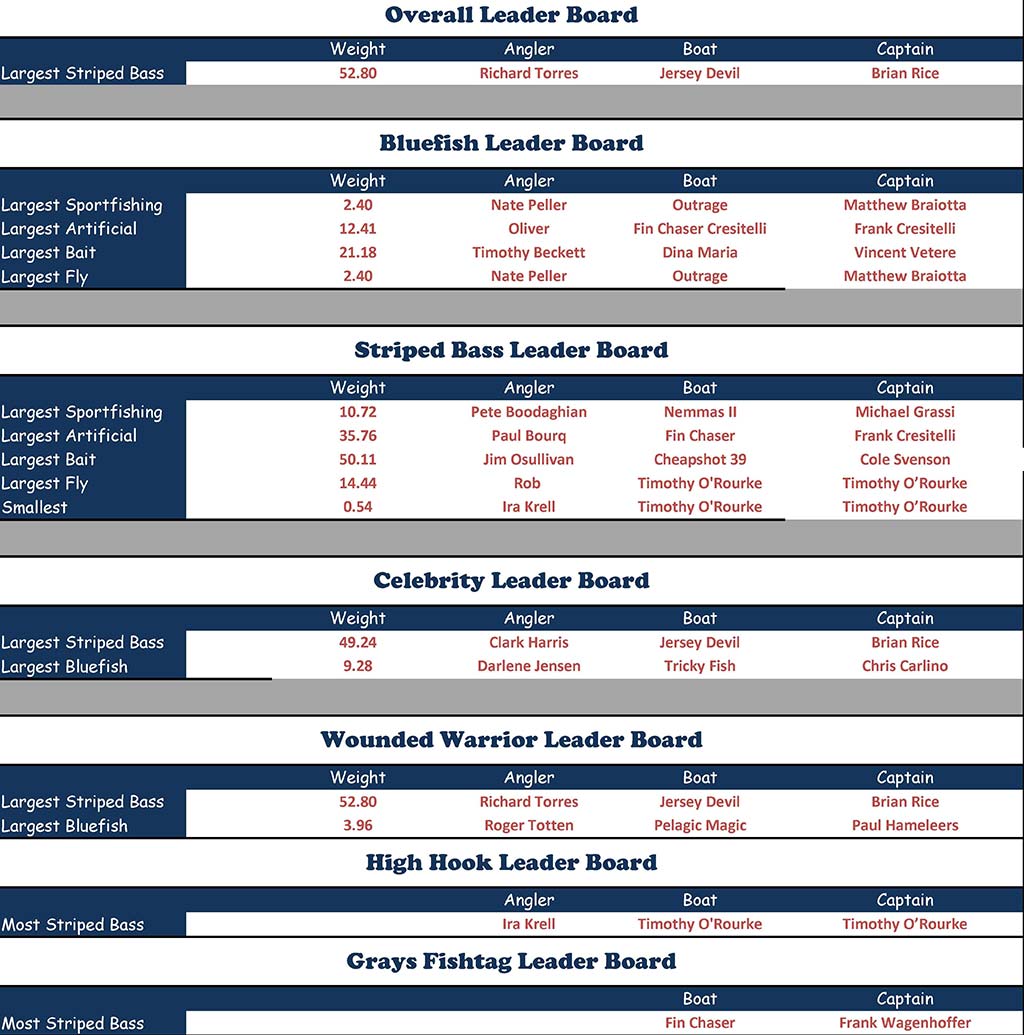