Ditch the sinkers and white bucket to chunk up a heavy this summer.

I’ve written about chunking in the surf before, and it’s a subject that has been touched upon more times than I can count over the years. However, it’s also one of the most asked about types of surf fishing that I do, just barely behind fishing a needlefish so obviously, there are still questions to be answered.

Back in May I discussed circle hooks and bait for both eels and chunks in the surf, so I will not dive into that subject here today. (Bait & Bass: Circles in The Surf, May 2021 print issue or online at www.thefisherman.com/article/bait-bass-circles-in-the-surf/) However, I will reiterate that 1) circle hooks are required when targeting striped bass with any sort of natural bait, and 2) I wholeheartedly believe that a circle hook is a better mousetrap when it comes to hook selection and chunking. Sure, there have been plenty of big bass landed throughout history on a j-hook and chunk, but I noticed an undeniable improvement in my landings when I fully committed to the switch.

Like many striped bass fishermen, my first-ever striper was caught on a chunk. That fish was landed while targeting bluefish, so I was using a heavy wire leader, chunk of frozen bunker and fishing from a pier. While the methods I now employ have changed dramatically in the 35-plus years since I caught that first bass, at its core the basic concept remains the same: put an easy meal in front of a hungry fish and it will eat.

While my dedication to the art of chunking has ebbed and flowed over the years, nowadays I fancy myself as a bit of a chunking aficionado as I take my bait fishing sessions quite seriously. I will almost never fish with frozen bait, and anything short of some bunker netted or snagged by my hands no more than an hour or two before I make my first cast is perceived as inferior. Just like my demand for perfection and quality in my artificial offerings, the same high level of standard applies when I fish the real deal.

Once I have a sufficient supply of bait on hand (acquiring said bait to be left for another day), I set about to fishing. The bunker gets cut with two slices producing three pieces; the tail ‘nub’ saved as chum and the remaining piece is cut roughly in half. I strongly advise that you invest in one of those cut-proof gloves if you plan to cut fresh bunker with any regularity as they can be tricky to hold with a bare hand. I nearly cut off my thumb several years ago when my knife slipped on a still-alive bunker, a copious amount of electrical tape wrapped around my finger was the only thing to save me from spending the night in the ER as opposed to the surf.

The chunks go into an oversized eel-type jug just like the one I first wrote about back in October 2010 in the article, Chariots of Eel. For eels a ¾- to 1-gallon jug works well, but for chunking I like it to be a bit bigger to hold more bait. My fishing partner came across some 1.5-gallon jugs when he was buying chemicals for his pool, so we use those. I can fit about 20 cut bunker in one of these jugs, and only a few times have I gone through an entire jug of chunks (by then I was so exhausted from catching fish that I was happy to have an excuse to call it quits!)

As my goal when chunking is to both be mobile and efficient, I do not carry a plug bag and leave all unnecessary items at home. My leaders are always pre-tied and packed individually in small baggies, and then I put at least a dozen of them into a thin waterproof cell phone container. I wear a primary belt with Boga, pliers and knife attached, and the leaders either go inside my wetsuit, in my Stormr Surf Top pocket or in a Commando Surfcasting pouch on a second belt.

Just like plugging and eeling, my chunking leaders are tied long (6 to 7 feet from hook to swivel) and made of 50-pound monofilament. I haven’t experienced any major benefit in using fluorocarbon at night for striped bass, and when I stepped up to 60-pound mono I found that my success rate decreased when compared to my fishing partner who stuck with 50. The only time I bother going heavier is when the water is very dirty and there is a bit of surf to contend with, but even then there is only one spot I fish where I found this to be of much benefit. No additional weight is added to my line or leader as I want the chunk to sink, settle and even drift as naturally as possible.

Arriving at my chosen spot, I position myself toward the up-current end of where I want to fish and toss out a handful or two the tail nubs. This begins the scent trail and will hopefully attract any bass that are staged down current. I hook my first chunk and cast it out, aiming well above where I want the chunk to settle as the current is going to pull it along, and because I don’t add any weight. In a perfect world my chunk would settle right on the seam of the visible rip line and beginning of the eddy (assuming there is one) as this is a prime feeding location. I let the chunk rest, keeping the line just tight enough to feel a bite yet not so tight that I pull it from its hold—yet. The rod is NEVER set down, so I can feel everything that my chunk is doing and everything that comes to inspect it. I know when a porgy begins to nibble, I can tell when a dogfish is trying to steal a meal, I can feel if the chunk slips free of its snag and tumbles in the current, and I swear at times I can feel when a bass nudges the bait before eating it!

Once the chunk settles to the bottom I begin counting in my head, and often a hit will come within two minutes if there is an active feed taking place—these are the nights I dream about in the offseason as it is one of the two bite windows when I have landed my biggest fish. From there I find another 2-minute window where I might get a hit. This is the bite window on nights when there are fish present but there may not be an active or competitive feed yet, so they need to smell the food and make their way to it. Usually if this is the primary window I get bites then it is from small to average fish, and rarely have I landed a memorable fish in this timeframe.

Still counting in my head, if nothing happens by 4 minutes of soak, I move the chunk a little bit to both reposition it and begin spreading the scent trail to cover a wider range of water. I then leave the chunk here for about 4 to 5 minutes, and often I will not get a hit in this window; I look at this as a period of time where I am drawing in the fish to my bait.

Somewhere around the 8- to 9-minute soak point, I might move the chunk one more time if there has been no sign of life. This further widens the scent dispersal in the water down-current, hopefully drawing in any lone bass that might be looking for a meal. This window is when, time and time again, I land my biggest fish of the session especially if it’s a particularly slow night. If nothing happens after 1 to 3 minutes in this window I reel up and put on a new chunk—rarely will I make more than a single cast with a chunk and, even then, it’s only then when I’m low on bait.

The old chunk gets crushed and thrown as far out into the current as possible to help chum the water. I then repeat the process with the next chunk, casting slightly above or below the previous cast location (assuming I did not catch a fish) to both cover more water and further widen the scent trail. When I feel that I have thoroughly fished a section of water, I move down with the current and begin the entire process again until I find fish or run out of bait and call it a night.

At some point in the night, assuming all goes well and a few fish swim into my chum slick, I eventually feel the telltale bump of a bass picking up my bait. Once again, at no time when I fish chunks do I set my rod down, so I am always ready to react when I feel any sign of life. My stance was described some years ago as ‘Captain Morgan’ in that I hold the rod in my right hand with the rod butt on my lower thigh and my left hand rests on my left hip (take a look at the rum of the same name and you’ll get the idea.)

At the first sign of a hit, which can be anything from a light tap followed by the line slowly moving off to a sharp slam where the rod is nearly ripped from my hand, I drop the rod tip from the 11 o’clock fishing position to roughly the 3 o’clock hooking position. I always fish a spinning rod and the line remains on the roller; there is NO NEED to feed line to the fish! As soon as the line comes tight, I slowly lift the rod back up towards 11 o’clock. If there is solid weight this is usually enough to spook the fish into speeding up thereby setting the circle hook in the corner of its mouth. If the hook misses its mark the slow lifting action causes the chunk to fall naturally back down to the bottom where the bass either circles around for a second try, or competition sets in and a nearby bass jumps on it. This is another added benefit of the circle hook in that when fishing a j-hook if a fish were missed when the hook was set, 99% of the time the hook would tear free of the chunk and/or the fish would be spooked off by the startling and unnatural motion of the hookset.

When a fish does finally grab the chunk, there is absolutely no need to set the hook in a traditional manner by yanking the rod back. I see and hear of anglers doing this with circle hooks, but very often they are the same guys who complain about dropping fish on circles. Steady pressure at the beginning of the fight is all that’s needed, and from this point forward the battle is no different than with any other method of fooling striped bass.

One last thing to keep in mind when chunking is that the fishing can only be good if there are fish in front of you. Even the freshest chunks coupled with the best methods cannot produce a bite where no fish swim. You still need to put yourself in the right spot, at the right time; a fresh chunk of bunker can only take you so far. 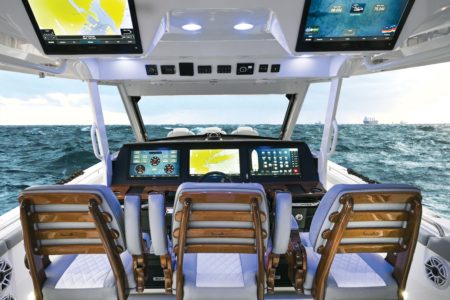 What’s new in the world of marine electronics for 2022? 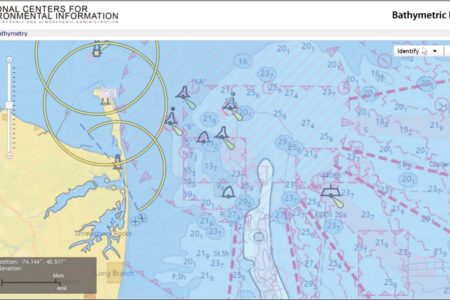 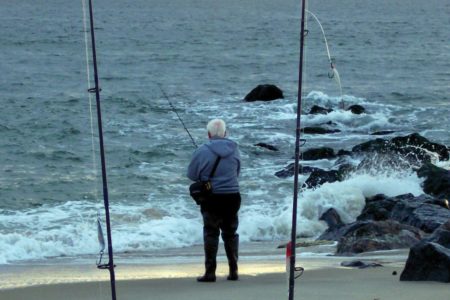