October is the time for hardtails in western Long Island Sound.

I love this time of year. It’s so ripe with possibilities and new species may roll in with any turn of the tide. I’m sure I’m not the only one that relishes in every moment of prepping for the hopeful return of what I consider to be the finest gamefish Long Island Sound has to offer, the false albacore, or “albies” as they are affectionately called by their legions of fans. They’re picky, strong, fast, and sometimes downright maddening.  They have definitely made me late to many family functions over the years and they drive me freaking nuts… but I love them.

I often spend hours prepping; changing leaders, organizing lures, swapping hooks, switching out fly lines, tying and then retying that Double-Uni because it wasn’t good enough, checking drags, and cleaning fly lines.  This may seem tedious to some. But I call it meditative. 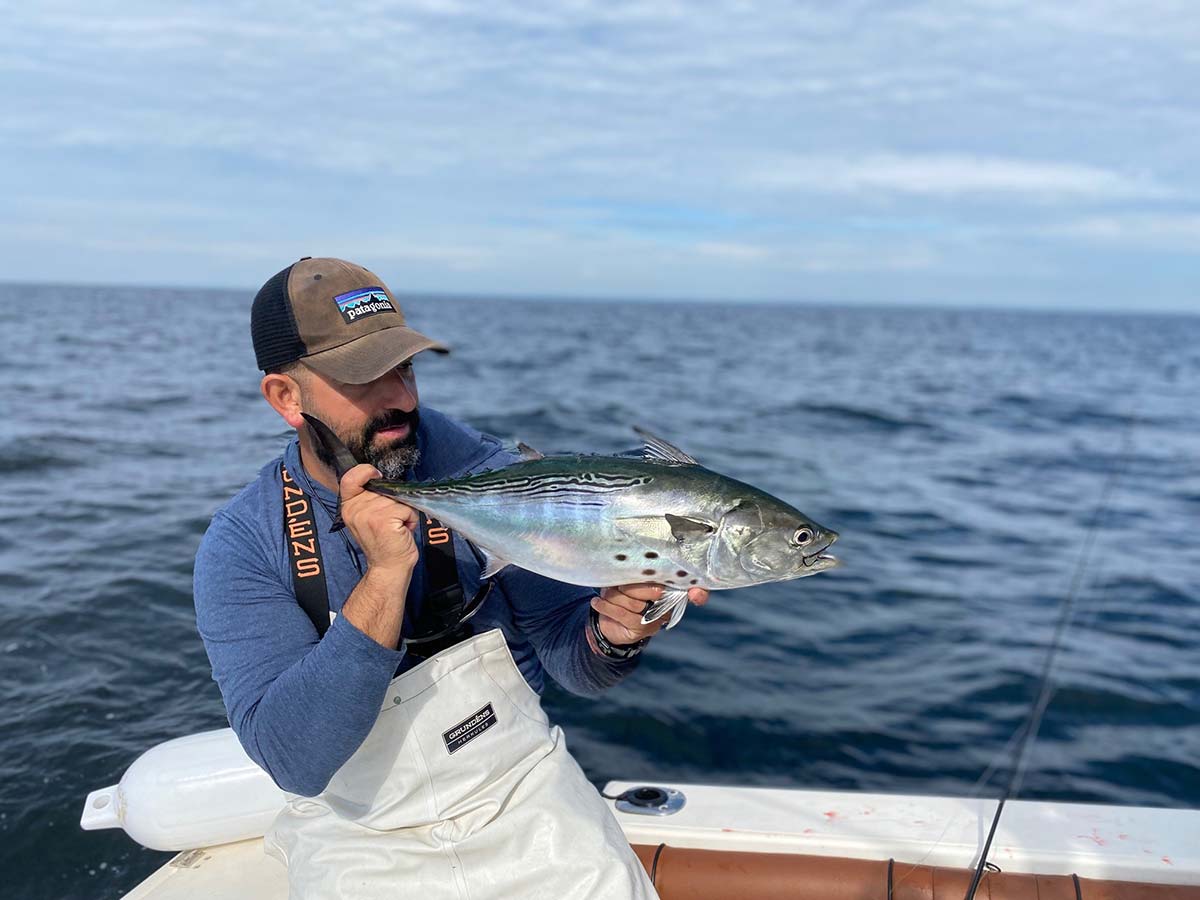 I am constantly checking my logs, and comparing weather patterns to years passed as if I think I’m a fish meteorologist. But what else can you do but think, and stew over what the upcoming weeks may bring? It’s important to remember that albies weren’t regular visitors to the area until about 15 or 20 years ago.  Not to mention, it’s always possible that they won’t show up at all. Their absence could be caused by the wind, tides, low numbers, or who knows what else…all I know is I really hope they show up, because I wait all year for this!

Some factors that go into the exact date that the albies show up are water temperature, tropical storms, and wind direction. Sometimes I have found that since we live near some large tidal rivers, a heavy rain can change the salinity of the water and keep them off shore, or just keep them from settling in to the area. There were many years in the past when they showed in late September, but more recently, it’s been October.

During the best years albies will hang around the western Sound from Mid-September to early November. So for this month and a half I am pretty much blind to fishing for anything else, I’m also blind to responsibilities, and family obligations. It’s the best time to be a fisherman in Long Island Sound and I’m sure not going to miss it! I have put in countless hours over the years to learn as much as possible about this frustrating mini tuna, and one thing I can say for sure is that every moment and every opportunity counts.

I usually start hearing murmurings of albies hitting the waters of Rhode Island and Eastern Connecticut by early September.  Once that happens I try to pay attention to the proportions of migration. If there are epic numbers then I know that the likelihood of some of those fish entering the Sound is high.  If it’s smaller pods, it will probably be another month (or longer) before we see any. The albies have to travel 50 to 100 miles of the Block Island Sound to get to what is considered western Long Island Sound, basically anywhere west of Port Jefferson.  Pay close attention to hurricanes and strong easterly winds as it is likely that they will be forced into the sound with a strong wind.

The first albies can usually be found in open water, in large, tight schools of a few-hundred fish that pop up as quickly as they disappear.  When they are in open water they tend to set off frothy whitewater blitzes that are super exciting to see. As the weeks pass, these large schools tend to break up into smaller pods of about 20 to 50 fish that tend to show around prominent points and reefs.  Then before they turn around and exit the Sound, I have found them right up against the shoreline in smaller more spread out pods anywhere strong current and rips occur and sometimes even on open beaches with sandy shorelines.  The albies seem to make a beeline for the Race as soon as the water temps start dipping into the low 60s or high 50s.  The furthest west I have heard albies were caught was about Bayville area.  It’s possible that the water quality, or salinity is not to their liking further to the west.

Unfortunately it is not likely to catch an albie from shore in western Long Island Sound.  These catches are a coveted rarity in western Long Island Sound.  However, it can be done. I know of one, maybe two people who have pulled it off.  This past year I was fishing in a boat right up against a point that abutted a sandy beach and there were numerous opportunities for a surfcaster to place their lure directly into the feeding zone, but there was not a single person fishing on shore.  In fact I was the only boat on the albies that day.  If you were to target them from shore this far west, you would have to find points that stick far out into the Sound, tidal river mouths, or reefs that you can walk out on.

When they first come in and are in open water, unfortunately it’s often a “run and gun” affair.  Covering water is essential.  Once you spot some activity, the best thing to do is just hang out in that area until you can no longer stand it, with the hope that they pop back up within reach, or at least a short putt away. They are usually eager to eat and are not incredibly picky. As the weeks pass the fish start to develop more of a pattern, you’ll find them setting up on rips at the tips of points and reefs. In these areas the albies will continually circle back to that one spot to feed again and again throughout the tide. At this phase they can start to become pickier.  I usually start with an Epoxy Jig for its castability, then switch to a soft plastic if they won’t take the jig.  If that doesn’t work, I’ll downsize or upsize my offering until I get a hit.  On those super flat days (if I am not getting bit) I may even decrease my fluorocarbon to 10-pound test.

Sometimes it is difficult to say which I like more, tinkering with gear or actually fishing.  Albies will test your gear.  Their runs are long, and fast.  They will expose any weak links in your tackle in an instant. Your drag must be tight enough to set the hook, but loose enough to allow the fish to make a hard run.  Seven- to 8-foot medium action spinning rods paired with any 3000-5000 size reel with a smooth drag will be ideal. Spool your reels with 15- to 20-pound braided line, this is ideal for casting distance and strong enough to battle the fish. Because albies have keen eyesight a 3- to 5-foot section of fluorocarbon is essential. My knot of choice to link the braided line to the fluorocarbon is the double-uni, others may prefer the FG Knot. I use 15-pound fluoro most of the time, some guys prefer 20, I won’t go lower than 10.

For lures there are four baits that I consider absolute must-haves. The first is a resin jig like a Hogy Epoxy Jig or a Game On Exo Jig. These cast very well and can be fished just below the surface or skipped along the top when the albies are blitzing. The next is the 4-inch Slug-Go, I fish these on light jigheads and crank them in fast. The last is actually an interchangeable duo; the widely acclaimed Albie Snax or the 6-inch Hogy soft plastic, these lures can be rigged several ways and be fished on or below the surface, their track records speak for themselves. Another essential part of albie fishing is a hook file, you really need to keep those hooks sticky sharp if you want to have the most success.

Patience is probably the most potent weapon an angler can bring on a hunt for hardtails. If you’ve fished for them before, you already know.  If you haven’t, then you will learn to be a patient; scanning the water for them to show up, hoping that they eat your offering, waiting patiently for them to come into casting range. Sometimes it feels like a lot, but once you get a taste, you may find that you don’t want to fish for anything else.