One New Jersey angler’s overview of last season & the optimism that a new season on the hunt is sure to bring.

No doubt, striped bass is one of the most important fish species along the entire coast. As they make their biennial run along the coast feeding heavily on bunker, mullet, herring, sand eels and all other sources of protein, anglers line the beaches and pile into boats ready to set a hook into a trophy.
Striper season begins every year in the spring; it’s certainly an interesting period as migratory bass move upriver to spawn, often converging with winter holdovers in between the line of fresh and salt. Soft baits like bloodworms and clams are ideal baits in March as often lethargic fish perform their annual ritual while feeding along muddy flats in shallower water.

As the official start of spring arrives and waters begin to warm, many new options and methods become available as these migrating striped bass continue along their journey.

Trolling is a huge producer for fish in the spring, with a couple of the hottest selections being the spoon and the mojo. No doubt, the mojo has been winning over quite a few converts in recent years, and has been a proven producer in recent seasons. The mojo is simply a large profile leadhead with a swing hook that has a large shad body trailing behind it. Two companies stand out when I am talking about mojos and that is BlueWater Candy and Magictails Bucktails.

One of the ways to fish these mojos that I have seen produce the most is tandem rigged. This is a rig where you fish two mojos on one, with one lighter and another heavier mojo in play. This is very similar to a high low rig but on a bigger scale and was deadly in shallow water about 30 feet.

Of course, with the presence of large, adult bunker into June and even early July, the bunker spoon has long been a proven trophy striper producer, particularly when working deeper water. In addition to finding the right depth where big stripers are moving, a key to working a bunker spoon effectively is determining the most prevalent bait. Early spring the Maja #2 or Maja #3 spoon might be most effective when herring are the primary bait, but as big bunker are moving through in May and June the Maja #4 usually gets the nod.

Whether trolling mojos or Majas, one of the key things I’ve found out about spring trolling is to fish an area where there is are drop-offs, lumps and structure. This is where they have produced the most. As fluke arrive, and those bunker become the predominant bait in close along the coast, that seems to provide one of the best opportunities all year for landing a cow.

Something that I discovered last summer that I know many striped bass addicts can appreciate while waiting for the fall run to start; there are still ways to catch your favorite fish throughout the summer months when you are able to accept scaling down your tackle. Striped bass will hang around local waters for long periods of time due to the amount of small bait we have in the warm months. Places to find them, sometimes with regularity, are around bridges, dock lights, jetties and other miscellaneous structure. 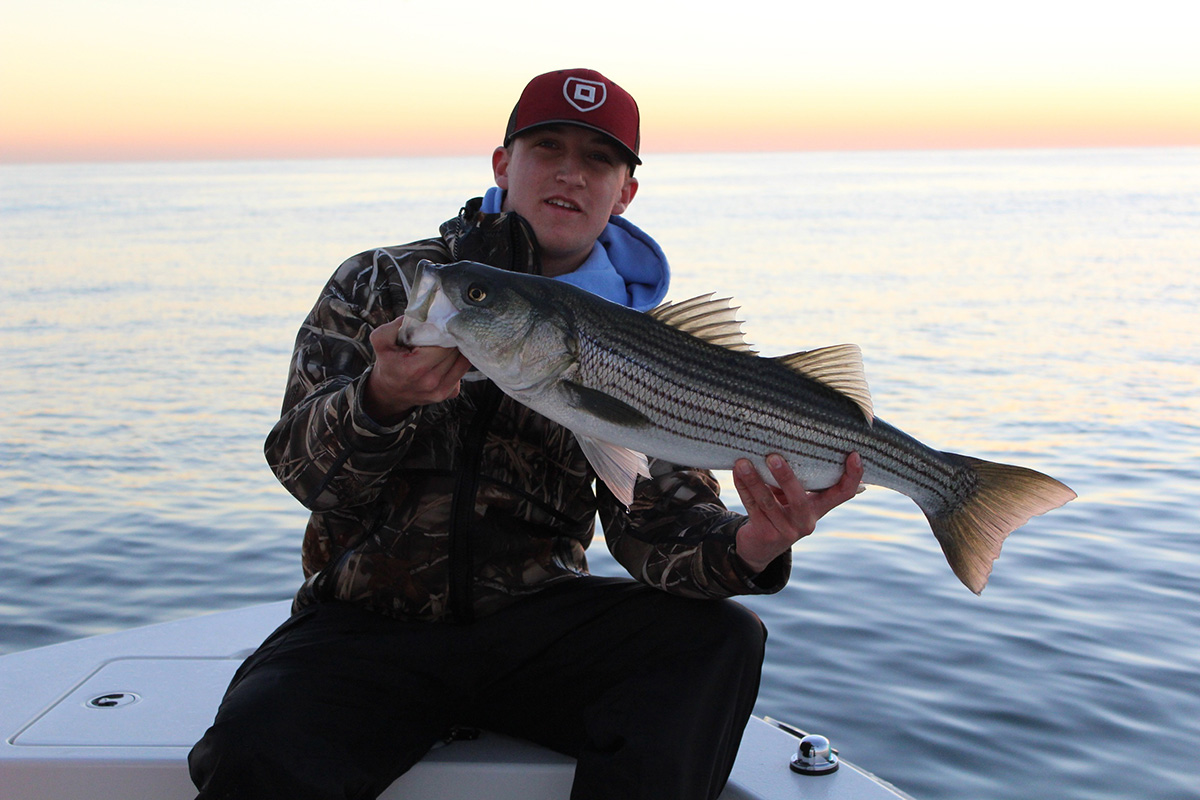 There are a lot of schoolie fish during this time but once you find bait and discover if fish are active in the area, it’s game on if you find the right thing to throw at them. In the warmer months you can really have fun with it on lighter tackle throwing poppers, small plugs, soft plastics and even jigs.

Some of my personal favorites during this time are the Bomber Saltwater Grade Wind Cheater, and also a 1/2- to 3/4-ounce VMC jighead with a D.O.A. Cal Shad in Pink, Alabama Shiner or anything with a little green and sliver. If they are actively feeding any retrieve works, but if they’re not moving much, a slow and close to the bottom retrieve works the best.

Fall Back to Basics

Fall is traditionally striper time of course, and there’s a lot going on along the Jersey striper grounds – bunker, whales, dolphins, stripers, gannets. There are basically three periods of the fall run, each requiring subtle changes to strategy. The early fall, or the mullet run, offers several approaches to the action; while more bluefish are available this time of year by day, early morning and nightfall provide better chances of striper action. Matching the V-wake swimming action of the mullet in your plug selection is always a best bet. 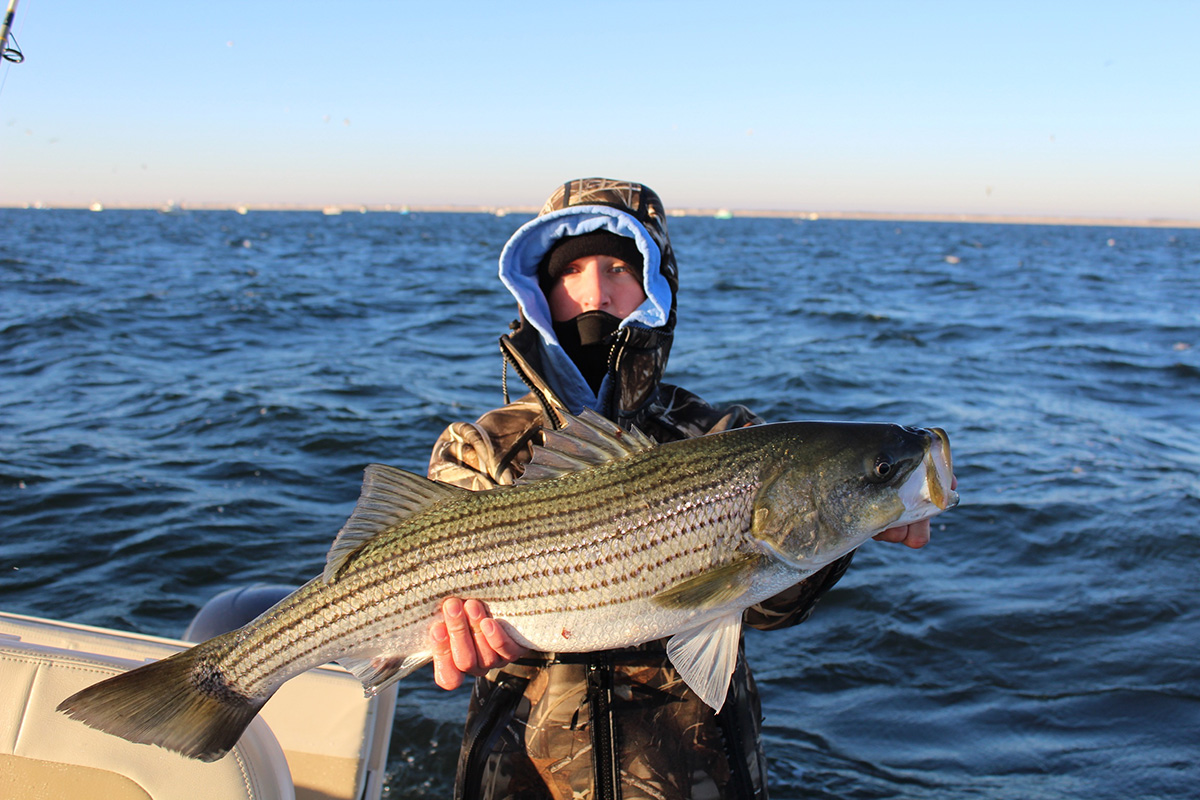 As the fall run gets into full swing, you’ll find larger stripers chasing bunker schools back down the beach; and as you’ve noticed, a lot of boats in the mix as well. Good advice for spring and in the fall is to get out there before the crowds; I like to get out the inlet a half hour before sunrise to start my pursuit. If you can get on a school before all the others there is a good chance that you will be able to catch more.

Also a key is learning to read a bunker school. There have been many times that I have pulled up to a bunker pod and fished it with no luck. I have noticed that you have to look at the way the bunker are acting, and they will tell you if you are in the right spot. Splashing, proximity to the surface, any signs of a blitz; pay attention to the movement of the menhaden to up your chances.

Spring or fall, snag and drop is a killer technique when bunker are around – but sometimes the bite isn’t there because fish are just lazy or not actively feeding. This is when I like to get a bunker directly to them! I like to use a fish-finder on my main line with a 24-inch leader that is tied to the main with a big circle or offset J hook. Get the bait down below the bunker school.

The final close to the season will come as herring and peanuts become the last stragglers along the coast; the first word that comes to mind is chaos! Birds wheeling and diving everywhere, with striped bass from 20 inches to over 20 pounds chasing baits at the surface. This is a time when I look forward to throwing Tsunami Talkin’ Poppers and Tsunami Swim Shads.

Before looking too far ahead, the action is just getting underway this month; as the season progresses, you’ll find there are many ways to approach the 2018 striper season.
The first step of course is getting out there to discover your own ways now.