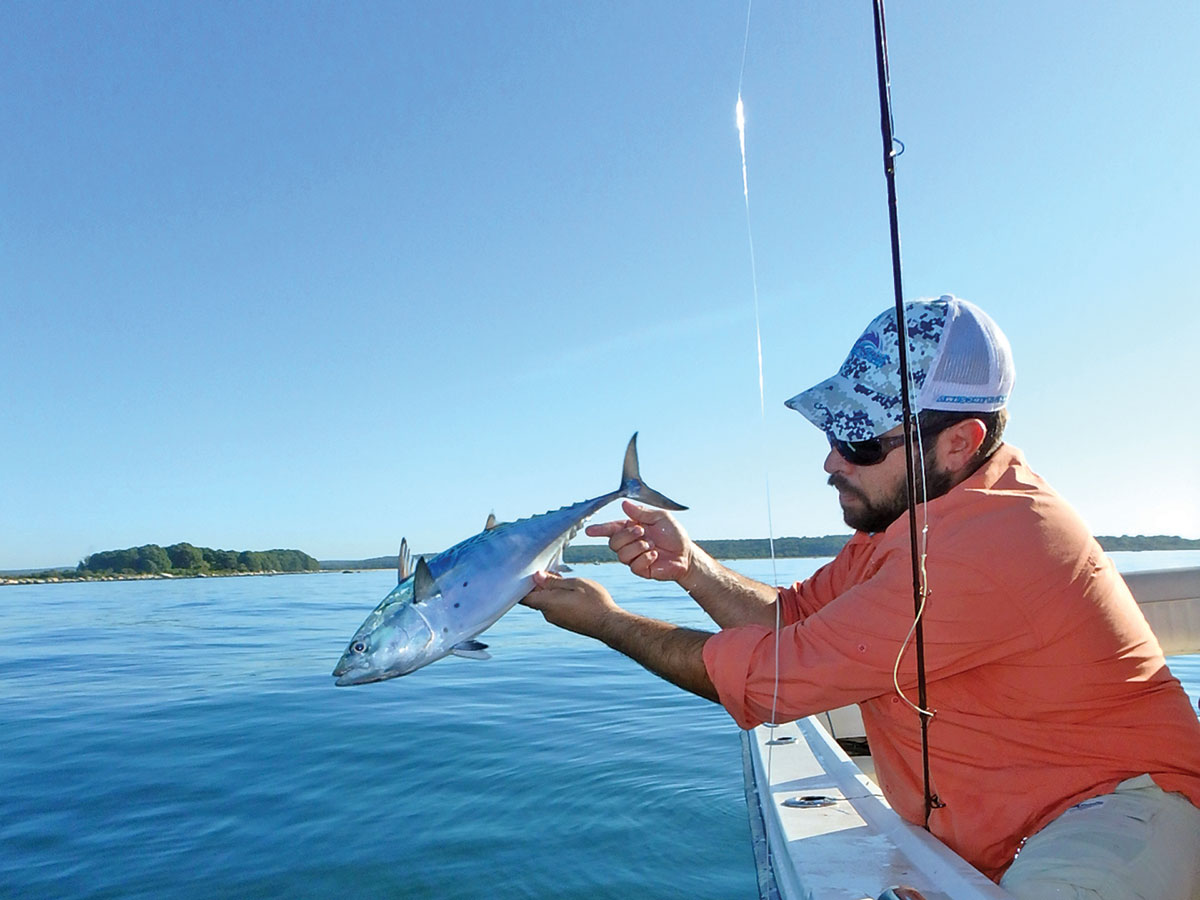 Follow false albacore as they move through Southern New England in the fall. (Photo by Toby Lapinski)

Let me paint a picture: One fall morning your alarm wakes you and you find for the first time of the season that you need your slippers as the hardwood floor under your feet is a bit colder than the morning before. As you walk down the stairs you see a little frost in the corners of the 12-pane window. Looking out that window the maples in your neighbor’s yard are glowing yellows and oranges as the morning sun hits the dew on the leaves. Opening the slider to your porch you take a breath and fill your lungs with fresh, fall, morning air. This is something out of the Saturday Evening Post, right? The quintessential New England Fall morning… for most.

Next, let me paint another picture for you: One fall morning you awake before your alarm because you know the ramps will have traffic with today’s forecast. Your toes hit the floor with speed and as you slide out the bedroom door on your sock-covered feet, saving valuable seconds. Skipping steps, you make your way downstairs and don’t bother looking out the window as it’s still pitch-black outside. The coffee maker just percolated its last drop and the aroma has filled the house. For many of us, these are our rites of fall. Our own “Norman Rockwell” but painted a bit differently. The fisherman’s fall has arrived.

What follows is a fall plan of action hitting the where, when, and how to take advantage of my favorite part of the fall run, the false albacore. You will see there is overlap throughout the season, so no matter your location, you should be able to pattern a plan for success.

The fat lady is starting to warm up so now is the time to target Cape Cod false albacore. Nantucket and Vineyard sounds are your playgrounds, and the waters from Cotuit to the Elizabeth Islands should earn your attention. This coastline contains bowls, outflows, and structure that are a nightmare for prey and a fairytale for predators. Rarely concentrated mid-sound, little tunnies will hug the 40-foot contour line and closer, which makes the fishing an equal opportunity to both kayak and boat fishermen. Albies corral bait in these depths and push them to the shallows, many times right on to the sands of Popponesset and South Cape Beach. Shore-bound anglers should take note of onshore winds and position themselves accordingly.

From the south shore of Falmouth to Woods Hole, there is plenty of access to intercept schools of fish from shore. Boat and kayak anglers should try matching the dropping tide in the salt pods on the south side of the Cape. These ponds usher bait to predatory fish and should not be overlooked. The steep drop-offs along the Elizabeth Islands are ambush city! Albacore push bait into the rocky coves and coastlines and it can lead to double-digit days, even on fly rods.

Buzzards Bay through the beaches of Westerly, Rhode Island and everywhere in-between should be loaded with hardtails gorging on peanut bunker and sand eels. On the furthest reaches east, start around the rocky points known as the “necks” in Buzzards Bay. Scraggy Neck and Wings Neck are highways and produce big catches. My largest false albacore ever came off Wings Neck, tipping the scales at 17 pounds back in 2012, caught on a Fin-S-style soft plastic. Bonus striped bass are almost always mixed into the pods of fish in Buzzards Bay.

The mainland side of Buzzards stretching west to Newport is another thoroughfare for migrating fish. Horseneck Beach, Beavertail Point, and the rocky waters off Ocean Drive are all great ambush spots for unsuspecting albies if you are relegated to shore fishing.

Continuing west, Point Judith to Watch Hill should be on your radar, especially on the dropping tides. The breachways are almost custom-made to pick off pods of fish with bait dumping into the sound. Over the years I have found fish can be picky as the bait can be small at times, the perfect opportunity to try a spoon and fly combo or even go full buggy whip!

Wagons West! Keep stemming the tide as it were and find yourself searching the Connecticut coast for albies. Stonington to Waterford should be your first stop on this last leg of the albie trail full of boney coastline with ambush points while at the same time close to deep-water channels; a perfect storm of sorts. On chilly mornings, or after cooler evenings, fish closer to the outflow of the Millstone power plant as the warm water should be quite attractive to our southern visitors. Of course this time of the year there is always a chance you run into a stray bonito or Spanish mackerel as they are just as happy to warm up before they high tail it out of town.

Further west, work your way past the Connecticut River towards New Haven Harbor. The last five years have put New Haven and West Haven on the albie map. One of the best places to catch trophy blackfish in Connecticut, it’s absolutely doable to get a limit of tog and then change gears, throwing light jigs at false albacore, which bully baitfish into the breakwalls of the outer harbor. The same is true heading west to the mouth of the Housatonic River. Known more for its holdover striped bass, this is a sleeper spot for late-season albies. Bait, structure, and current collide for the trifecta of fish-catching factors.

Short Beach in Stratford will give ground-pounders a shot from shore as the fish keep working west towards the Norwalk Islands, the final stop on our false albacore trail. It’s like these islands were sculpted for the sole purpose of creating fish-catching habitat. No matter the wind, you can find a cove, hole, trough, or bowl that has bait pushed into it, and at this time of the year likely being harassed by the last of the false albacore. Boaters and kayakers alike, mark your calendars and fish planners and plan to spend your late-fall days here!

Everyone has their favorite funny fish setup, and if you are anything like me, it’s a dynamic package that changes with fads and new tackle introduced to the market. Like the Canal fisherman who has a jigging setup separate from his plugging rig, I too have multiple combos for the different baits and weights I find myself throwing. Add to that my go-to surf and fly outfits, my quiver of hardtail tackle looks like this.

I like to have two combos rigged and ready in the boat. My softer outfit is tailored to lighter offerings, baits from 3/8 to 3/4 ounce. These feature my lightest of leaders and are at the ready when the “snot” bait is swimming. For heavier baits I turn to a rod rated 1/2 to 1-1/2 ounces. These are perfect for the new EXO jigs from Game On Lures or soft plastic baits rigged on Z-Man jig heads. I prefer both rods to be 7’6” as the extra length can help when the schools seem just out of reach.

From the beach I have fallen in love with the Tsunami Trophy II Surf Distance Series. The slower action is just perfect for loading light weights. The age-old problem for surfcasters is that we always seem to be just outside of range. The answer has been to increase the weight of the lure, which tends to make the offering just a bit too big. Tsunami solved this and the outcome has been spectacular. I pair this with the new Tsunami Evict 3000 and already this season I have been impressed with the performance. Available in two models, 8’6” and 10’, there is a spot for both of these as the rods retail under $90!

When it comes to fly rods, I am a purest. I have played with the G-Loomis short sticks and have even built my own, and while they are more than adequate, I have to say a 10’ 9WT rod remains my go-to stick. A bit longer to pick up a weighted line, which I use almost exclusively, the weighted line allows me to have just one false cast and shoot so I can tuck the butt under my armpit and immediately begin a two-handed strip. My fly box is simple with a few patterns tied in a rainbow of colors. Clousers and deceivers tied a couple ways, but most importantly is a fly developed by my old friend Warren Marshal of Outcast Charters. He calls it the Outcast Slammer, as it has accounted for dozens of New England slams over the years.

As I write this the “albie flu” is spreading like an epidemic and employers from Cotuit to Westerly are finding their fish-minded workers afflicted with this disease. The cure is out there folks. No, it’s not “more cowbell,” but instead a heavy dose of “time spent fishing” and there is no better time than now.