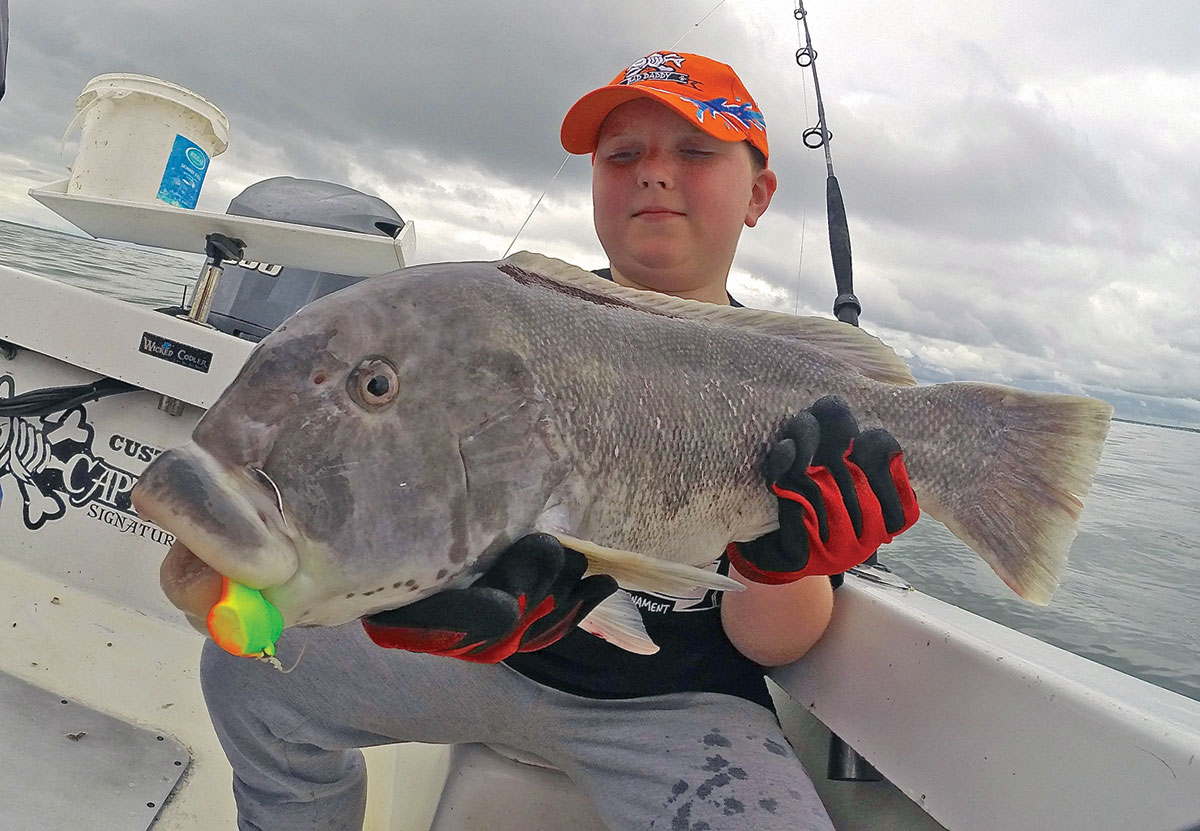 Fall fishing means big blackfish; here’s a look at how you can put a true “togzilla” onboard your boat this season.

Many people tautog fish to relax and enjoy time with friends and family in the outdoors. If these anglers come home with a few fish, and nothing breaks on the boat by the end of the day, they see the day as a win. Then you have the anglers who are known as the 10% Club. These people put in the time and consistently catch their targeted species. This 10% of the fishermen catch 90% of the overall fish. An even smaller percentage of anglers will consistently land trophy-size fish of any species. On my boat we love to target trophy fish, and one of my favorite fish to target is the tautog with the biggest ones being referred to as togzilla! 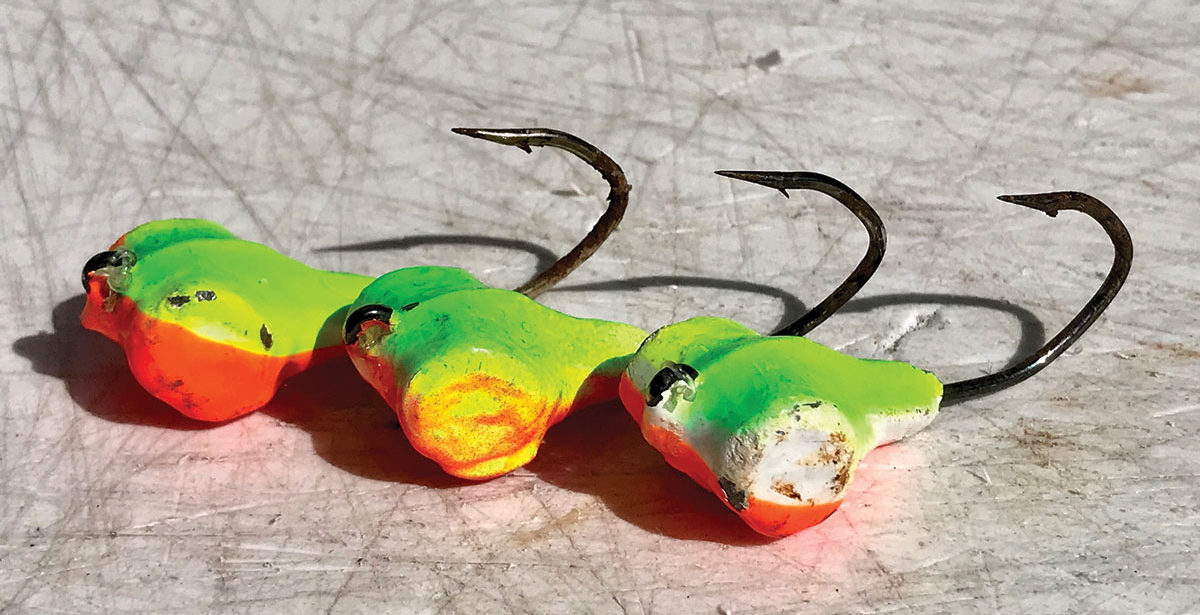 To be considered a togzilla it needs to weigh over 8 pounds. These fish get big, white chins and have human-like teeth making them one of the hardest fighting bottom fish in our local waters. The bait of choice to specifically target these fish is green crabs. They are also known to be difficult to hook as oftentimes the bites are very soft, and the fish can steal your bait before you realize what happened. Proper bait preparation will increase your hook ups. If the bite is aggressive you can simply cut your green crab in half and hook it in and out one of the leg sockets before dropping it down. If you have large green crabs and the fish aren’t biting well, try cutting off all the legs with a pair of scissors and then cut the crab in half. I also remove the top shell to expose all the yummy goodness that will get the fish all fired up. 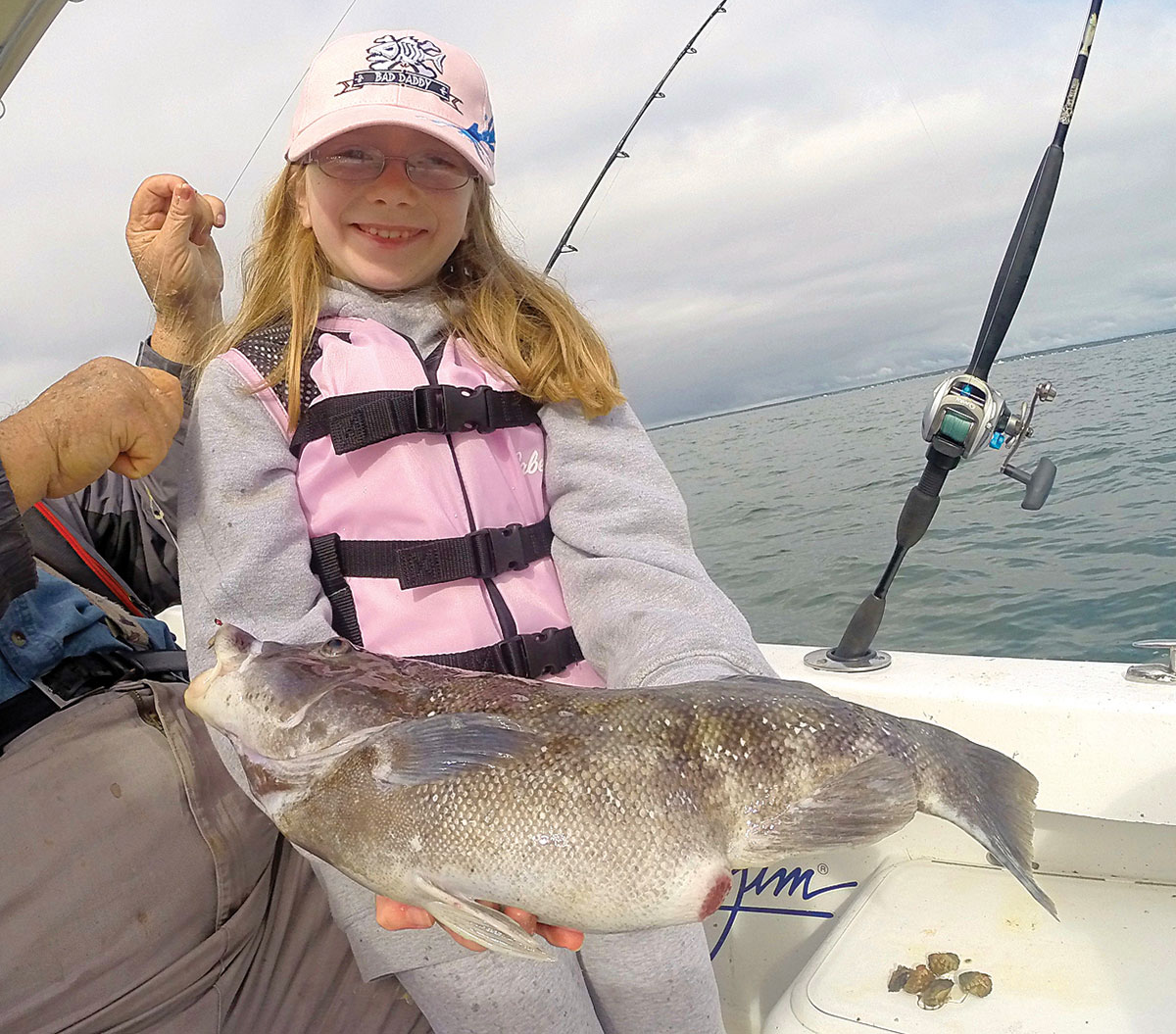 Most of my togzilla hunting takes place in Buzzards Bay. This is one of the most well-known bodies of water in New England to target them, and just about every rock pile has the potential to hold tautog at certain times of the year. The trick is to know when to fish the right rocks at the right tide. Tautog migrate offshore in the winter months and begin to return to Buzzards Bay in April. The water temperature will determine exactly when this happens. The magic water temperature number is 52 degrees. Often in the spring the only time the bite will be active will be when the warmer water from the back bays and estuaries dumps out into the bay. This is a tricky time of year to fish because even though you might have found a pile of fish they might only feed four to five hours a day. As soon as that warm water is gone from the outgoing tide, and the cold water starts to push back in, the bite will shut right down.

Once the tautog have moved in from offshore, and we have a consistent water temp in the mid to high 50-degree range the “hunt for togzilla” really begins. Many rock piles have the potential to hold fish. I use my Lowrance sonar and side-scan to locate big structure on the bottom and have found that big structure often produces big fish. The best structure is often found in an area you would not think to fish. Some of my very best spots have a sandy bottom with a rock pile “oasis.” This rock pile does not need to be very big, but it will hold some of the biggest fish in the area due to the changing tides and winds. Do whatever it takes to stay right on top of the structure. A trick is to deploy a double anchor system, but this takes time to master and can be dangerous. A second option is to use a trolling motor, which has helped produce some togzilla-sized fish. This gives you the ability to position your boat right on top of the structure without having the hassle of deploying an anchor. Now that you have found your new honey hole, how are you going to trick that fish into eating your baited hook?

My terminal tackle to catch tautog is dictated by the current and its speed. When the current is moving strong enough that I need a 3-ounce or more sinker to keep my cut green crab straight down on the bottom, I use a simple dropper loop rig. I tie up my rigs with a minimum of 50-pound Gamma fluorocarbon and attach a 5/0 Daiichi octopus hook. The stiffness of the 50-pound fluorocarbon keeps my hook away from the main line of the rig and will not tangle onto itself. I adjust the sinker weight as needed to hold bottom. I keep my dropper loop close to the bottom only a few inches away from the sinker. These fish are bottom feeders and expect to find their food on the bottom.

Once the current slows to the point that I can get a tog jig to hold, the odds of me landing that togzilla increase. For the last seven years I have used a jig made by Jonny Jigs and we named it the “Chisel Chin.” This jig has produced more togzillas for me than any other method. The 2.5-ounce jig in bright green and orange is a sure-fire way to get that fish’s attention and the rattle in the jig closes the deal. These jigs are baited with half of a green crab and I run a 50-pound fluorocarbon leader to one of my 6-foot custom spinning rods. I pair this rod up with a Quantum or Van Staal spooled with 60-pound hollow core Gamma braid.

These tog jigs are designed to sit with the hook pointed up so it is easy to hook the fish when it strikes, and the hooks are super sharp. The only downfall to fishing a jig is that they get hit so often that my shoulder gets worn out from setting the hook so many times. One added feature when using a jig over the dropper loop rig is that once that fish associates the jig with the bait it just took off your hook they oftentimes continue to hit the jig with no bait. Hopefully you can apply some of these tips and tricks on your next hunt for togzilla!