One of the things that always draws me to fishing is the mystery of what’s going to come up when casting a bait or lure into the water. Just a few weeks back, that’s exactly what occurred when I and my good fishing buddy, Zeppi, headed to a local inlet in search of false albacore and schoolie bass. Zeppi was also dead set on targeting porgies from our rocky perch atop the jetty so I picked him up a box of sandworms before we left.

When we arrived at the jetty, everything looked quiet. As the tide rolled in some bait started to move and we saw some fish breaking. Some schoolie bass and cocktail bluefish were chasing rain bait along the jetty, and I was able to land a couple by casting a small tin at the schools. Meanwhile, Zeppi had cast his porgy rig baited with sandworms into the inlet and wedged his pole in between the rocks. He was casting a tin while deadsticking the bait rod and managed a Spanish mackerel, an exciting bycatch. After landing the mackerel, he noticed the deadstick rod was getting some attention so he set the hook and was rewarded with a nice sized porgy. I gave him credit for catching his intended target.

A little time went by and the bass and bluefish action had died off. Things were quiet as I went back to the truck for a different lure. Zeppi was on the jetty casting his tin with his other rod still anchored in the rocks when a pod of bait came through with schoolie bass harassing them. He shouted at me to grab my rod and get up on the rocks. I quickly clipped on a tin and as I turned to walk toward the rocks, I noticed the tip of his baited rod dancing from what looked like another porgy. As Zeppi was reaching for the rod, it bent over and the drag began screaming as something raced off with his sandworm baited porgy hook. He dislodged the rod from the rocks and learned back on it.

As I approached him, his rod was bent in a U, with the line zipping down the inlet. My first thought was that he hooked a ray. They can be numerous in the inlet during that time of the year. We chased the fish down the rocks with the incoming tide for about 50 yards. At this point we saw the fish breach the surface. That’s when I knew it was definitely not a ray. As he worked the fish in I could make out the shape of a large striped bass. At this point we wondered how we were going to manage this. We were not properly geared up for landing a fish like that and the waves were getting bigger as the tide was coming in. When the fish was close, a wave picked it up and put it between two rocks at the base of the jetty. The waves were pounding the rocks and Zeppi was struggling to keep the large fish in place with the light action porgy rod. Each wave that came in was burying the fish deeper in the rocks, and the leader was rubbing on the rocks every time a wave hit. After 10 minutes of this the line finally gave way and the fish was at the mercy of the ocean. Still wedged in between rocks, and nearly getting washed out every time the water receded, we thought it was a lost cause. Then I spotted the fish again deep in the rocks. I yelled “It’s still here!” I sent Zeppi down the jetty looking to borrow a gaff while I kept my eyes on the fish. Five minutes later he returned with one from a jetty regular. I wedged myself down in between the lower rocks of the jetty then he passed off the gaff to me. At this point the waves were crashing off the rocks and coming over my head. Zeppi was right behind me getting soaked too. It looked like we jumped in the water and went for a swim. Taking my shot with the gaff, I hooked the fish in one quick motion as it became visible and handed off the gaff to Zeppi. We both crawled out of the rocks sopping wet but victorious. He just sat on the rocks for a couple of minutes, laughing over the events that just took place.

Unfortunately the fish couldn’t be released as it received too much trauma from the waves. The fish brought the scale down to the 30-pound mark. A great catch anytime but especially impressive considering the circumstances. And yes, no doubt there was a little bit of luck involved as well. 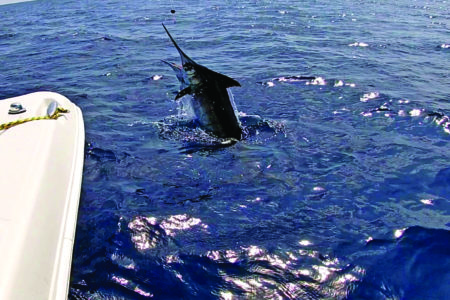 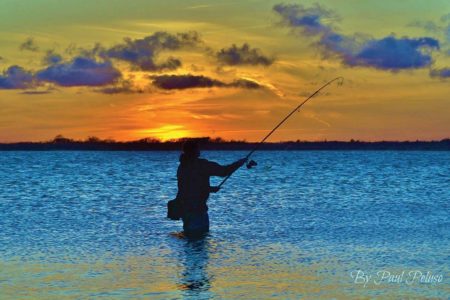 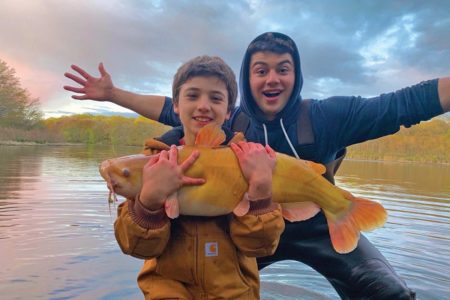 Tale End: Monster Of The Lake

It was an overcast, rainy day on Long Island when my brother Kyle, my friend Ricky Hutter and I set out to capture a beast.