Finishing up my conversation with Joe Pallotto at his home on the bank of Deal Lake, I came away feeling that I had been in the presence of a truly great man. The long time president of the Asbury Park Fishing Club, Pallotto has lived his life to the fullest; a life filled with friends and good times, and one that gave back and fought for what he loved.

I felt bad that over the years I had not spent more time with him; he’s the kind of guy that makes you feel good. To make me feel a little better I did take him up on his offer to catch carp off the dock when spring rolled round! Joe is 71 and suffers from Parkinson’s disease. I don’t use the word “suffer” lightly either, for he’s a big, strong man, always has been.

Pallotto worked for the city of Asbury Park and he was head lifeguard there for many, many years. He grew up there, diving the jetties, snaring big blackfish with his Hawaiian sling and catching big stripers on live herring from the surf. At one point he was 280 pounds, but is now down to only 170. His balance isn’t good and his hands shake from time to time.

“I can’t do it all anymore DJ,” he said to me. “All I have is the past now, my memories!” Fortunately, he has plenty of those and great ones too.

Pallotto filled his life with activities and good deeds. He is the sitting president of what is said to be the oldest, active fishing club in the country, the Asbury Park Fishing Club (APFC) founded in 1902, having first joined at the ripe old age of 17 back in 1963. In 1987 Pallotto became president and he presides to this day. He along with the APFC, besides being a group of guys that Joe referred to numerous times as “one big family” that fish like fiends, they have also impacted the surfcasting communities on multiple fronts. Spearheaded by Joe and his strong and determined friends they have fought for things like beach access, protecting the herring, saving the jetties, and against the bunker boats.

And trust me, if you don’t know Joe he has a very strong spirit and was a tough guy in his day. With Joe, you never have to guess what he is thinking. If he felt strongly about something and you were going to take that away, you had a fight coming; he has fought for what he loved, and Congressman Frank Pallone and other politicians know him well!

Besides fishing and fighting the good fight, APFC can be credited for getting the ever so popular fishing flea markets – more specifically labeled the “Plug Shows” that hundreds of crazed surfcasters attend each winter – off the ground. This year marks the club’s 25th year doing the show, with 35 different plug builders expected on March 12. The very first Asbury Park show started off innocently enough where they had a sale between members one day, basically to sell and buy from each other. John Geiser the legendary Asbury Park Press columnist mentioned it in his weekly column, and as the day progressed people started to show up, buying like crazy. Some members went home and gathered more stuff to sell, it turned into a sensation. The next year it was made official and the first flea market and plug show was on the map.

Tony Saunders soon headed up organizing the flea markets, at which point they began adding plug guys consisting largely of guys from the club as they started building their own plugs to sell. From there came some of the best builders of the time; Billy McFadden led the way, right behind him was a plug called the “Lefty” named after the creator Lefty Carr. Today he has a lip named after him the “Lefty Lip” a name popular amongst plug builders; Joe however was quick to point out that it was really McFadden’s lip that Lefty used, and said it should actually be called the McFadden lip!

Since 1992 the plug show monster has grown to where it is today – one of the biggest winter surfcasting events with casters lining up early with pockets full of cash to buy custom-made plugs from the best builders. Some of the great builders that have graced the floor of Convention Hall in Asbury include Lefty, McFadden, Skippy’s, Gary Hull (Gary2), Ralph Ward (Hook-R), Glenn Davis, Tom Bottomley, Mike Fixter, Bob Smith (Digger), Gary Gredenza (Basswood), “Big Don” Williams, and others.

The early years created some of today’s great plug builders, Fish On!, Sunset Customs, Big Rock, Cyclone, DT Lures, Luna, Loki, Black Label, D-Mag and others. It drew guys all the way from California including Mike Fixter and Joe Rivera of Bodega Bay Lures. Gary Soldati (GRS), a popular name amongst plug collectors today, really got his introduction to this market at the Asbury show. I remember the first time he was there, his big pikies drew attention. I also recall John Haberek, “Habs” coming down with buddy Mike Dauphin from Tattoo Lures. It was a big deal having those guys coming all the way from Rhode Island, pretty much unheard of before the Internet! Hab and Tattoo (as he was called) were able to introduce their products to the New Jersey market and were warmly welcomed!

One of the beautiful things about the APFC Fishing Flea market is that much of the profit goes to great causes like the Shark River Surf Anglers trout tournament in Spring Lake, Asbury Park Boys and Girls Club, and Big Brothers/Big Sisters of Monmouth County. Joe is very proud of that. Another great example is the Asbury Park Little League. The club gives money for some of the kids to go to baseball camp for a week in Williamsport, PA in the summer. Joe showed me postcards from several of the participants thanking him and the club in their own handwriting for making it possible to go. On the back of one in particular read “PS- I was an all-star.”

The State of the Fishery

Pallotto cut some of his wife’s delicious homemade crumb cake while we sat at the table in the nook, our conversation shifting to our beaches and our stripers. “What they did to the damn jetties is a shame,” he said in disgust, “Man they ruined these beaches.” Joe was of course referring to the beach replenishment project in Deal, the sand pumping, the busting down of great jetties, and the kill off of what was once a great ecosystem. “There was life there, I used to have a spot where the green crabs would gather and I was able to catch them for blackfish bait, they were always there. Now there is nothing!” 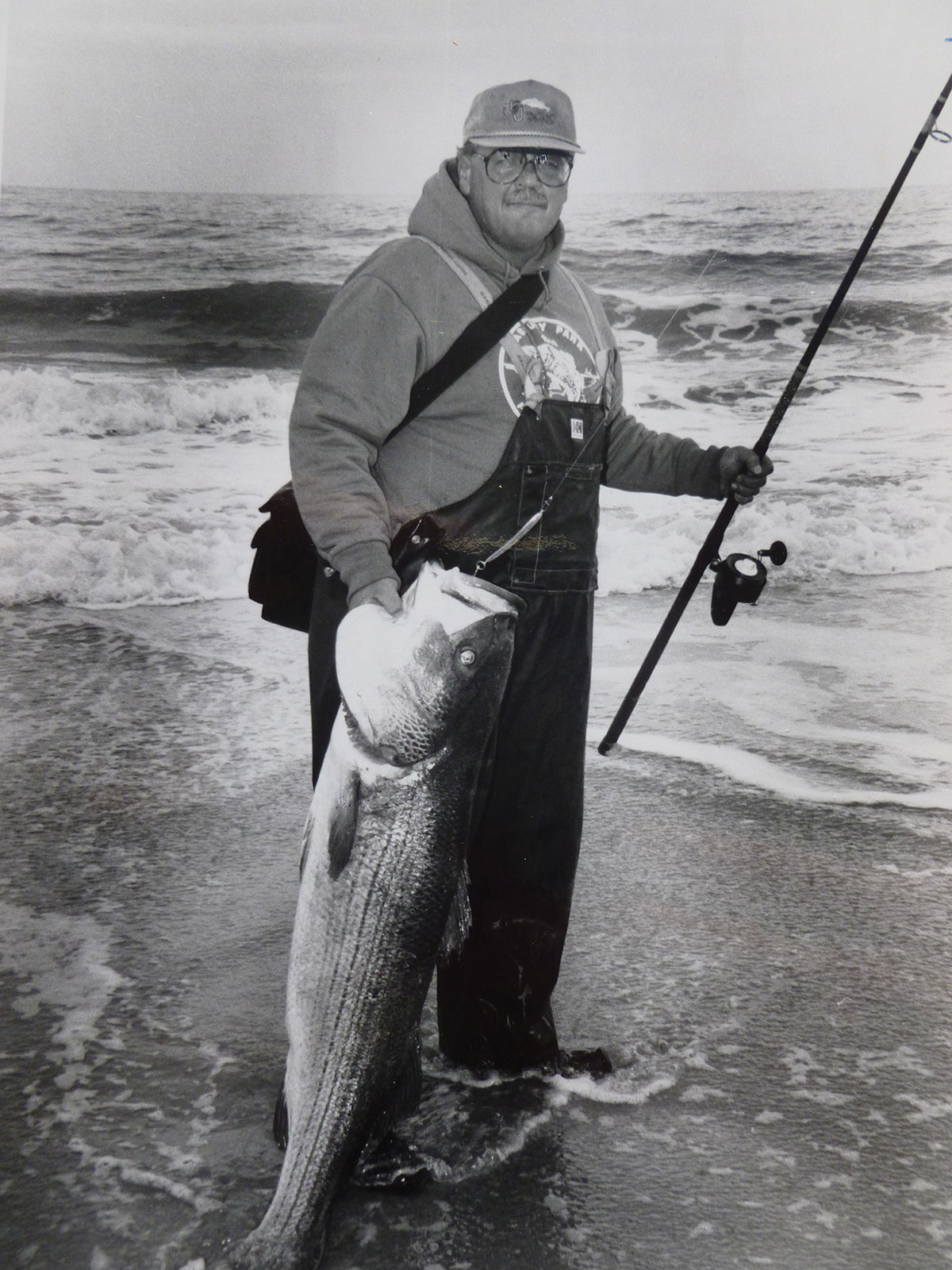 He vented on other issues, like the herring runs destroyed when the flume at Wreck Pond in Spring Lake was not being built correctly. The herring no longer use the lake, with the flume now being rebuilt to accommodate the important forage fish. The club also fought hard against the bunker reduction boats and the huge factory ships that would net every bunker in the area. Pallotto like so many others remember clearly; when those boats left there was nothing; no bait, no bass, which brought APFC and other state groups together in the 1990s for a unified fight. On January 6, 2002, hard-fought legislation banning the process of menhaden-reduction fishing in state waters was ultimately signed by Acting Governor Donald DiFrancesco; when the bunker returned, so too did the striper fishing.

Thinking on the state of the striped bass, Joe said he felt it was in pretty good shape. He emphasized that it wasn’t the guys keeping a fish on the beach that hurt the stocks as much as it was the netters. The thing that really got in his craw – as it does with just about every surfcaster – is the netting of the fish and the needless killing of by-catch stripers by the pair seiners.

As we walked onto his back porch, Pallotto showed me photos of him as a younger man, the plaques and letters and articles from years past. I was surprised to see one I wrote about him over 10 years ago for the Press; I totally forgot about that one. It was a walk down memory lane for him, and I. Watching Joe talk I saw a proud man; though his body has begun to betray him his spirit is still strong.

But through his strong and happy personality I could sense feelings of frustration and hints of resignation due to the butt kicking from the Parkinson’s. I could see that he realized that it was time to let the younger generation take over, one that he has taught very well and thoroughly.

I’m looking forward to spring; not just for the striper run, but when Joe and I sit on that dock and talk, and wait for a fat carp to take our bait.