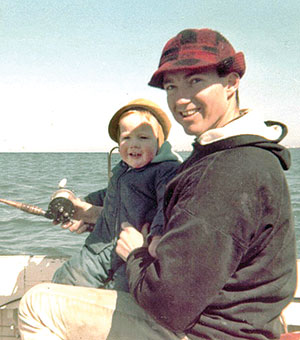 Just out of college and living alone in a one-room shack on LBI, it finally struck me just how tediously long February could feel (strange given the fewest actual days of any other month in the year). That realization hit me early in my adult life as the natives grew restlessly sick of the same, tired old faces everywhere we turned.

Now in my 50th year, I must say if it weren’t for the weekly boat and outdoor shows, meeting new faces on a weekly basis, I might have gone a little crazy by now (okay, perhaps a little crazier). Thank God for The Fisherman, where perhaps we’ve all found a bit of salvation in that kindred angler spirit and mutual optimism for a new season of opportunity.

The March 1 opener for striped bass has always stood out like a beacon on the calendar; the thought of a short drive across the Causeway, a few miles south to the Point or north towards the Crick, offering promise in those waning days of February. As pitchers and catchers reported, I’d methodically begin scratching out each passing day of the final weeks, the thought of a dozen bloodworms and a sunny sod bank intensifying my own opening day butterflies.

Of course, then March would come roaring in like the proverbial lion, squalls shattering my hopes, and driving me back the “local” with the early bird specials and same old faces, the long, cold, dreary Jersey Shore winter continuing. “Hey cap, how’s the chowder today?”

I guess climate change has its advantages. I’m not about to get into one of the denier versus ideologue debates about what’s causing our warmer winters; one look out to the back yard in the fourth week of January with bay waters again rising over the bulkhead towards the back door is enough to know that things simply are not the same.

My very earliest fishing photo was taken in March of ’69, sitting on dad’s lap while winter floundering on Barnegat Bay aboard one of his old garveys. That old PENN Senator was probably 15 years old at the time; I kid with him today that he’s too frugal to get new equipment, still using that 60-year old conventional for trolling. “If it works, why change,” is how dad typically responds, then making fun of my “steamer trunk” full of new gear collected at the winter shows and invariably hauled aboard every father-son shakedown cruise of each new season.

Winter flounder fishing sure has changed, and those days when you could walk down to the bulkhead with a dozen bloodworms for a bucketful of blackbacks are most certainly not the same. But even at two-fish, the prospect of father-son, mom and daughter, family fishing for a few hours in bluebird conditions is as much worth the trip down memory lane and as it is down the local pier. Struck again by the winter malaise in another howling winter nor’easter, while staring into that old photo, I dialed dad’s number to check in.

“We caught a lot of fish yesterday, must’ve been 30 or 40, mostly snappers,” came dad’s voice on the other end as he relaxed on the porch of his Pine Island, FL winter home. “Too breezy to fish open water for trout,” dad complained, detailing his trip into the mangroves with live shrimp. “Had fresh fish for dinner though, how about you son?”

Mentally marking another day off the calendar, I closed the lid on my laptop, bid dad farewell, and went out into the storm to join the rest of the natives at the local for a bowl of New England. Lion or not, March 1 can’t come soon enough!