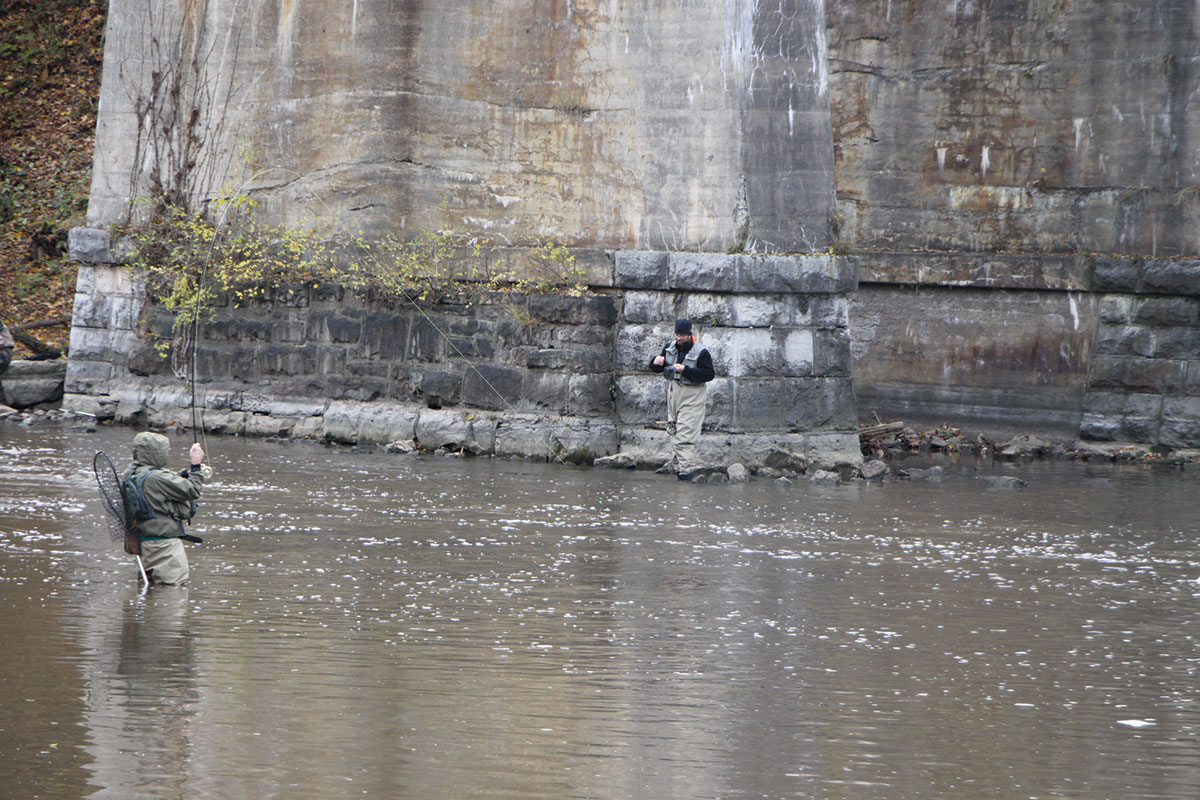 The Lake Ontario region offers some excellent angling opportunities for coastal anglers waiting out the  arrival of key species.

For the angling fraternity, spring on Lake Ontario and its tributaries can be likened to a kid in a candy store – lots of tasty morsels to choose from giving them a diversity that will quench anyone’s palate. Availability varies from year to year depending on the severity of a winter. The winter of 2016-17 has been a bit milder and that generally means more early fishing opportunities all the way around – in the lake, in the streams and rivers, off the piers and maybe even a little late-season hard water action in some of the bays and harbors.

Another important consideration is location. Each location along the lake (broken down into counties) – from the Niagara River to the St. Lawrence River – has its own slice of fishing heaven. Species, tactics and conditions vary from one end of the lake to the other. Again, personal preference dictates where and how you wet a line. Become familiar with all of the different locations along the southern and eastern shoreline of the lake in New York waters. Have some fun exploring.

If you want to fish the top tributary in the state based on numbers of fish and angler effort, the Salmon River in Oswego County should be at the top of your list. Based on the 2015-16 Tributary Survey conducted by the state’s Department of Environmental Conservation (DEC) from September to April, the Salmon River is responsible for 77 percent of the total fishing effort on the lake when it comes to the tributaries. Five other streams and rivers chimed in with at least 10,000 angler hours each – 18 Mile Mile Creek and the Niagara River in Niagara County; the Oak Orchard River in Orleans County; the Genesee River in Monroe County; and South Sandy Creek in Jefferson County.

Other tributaries worthy of mention include the Oswego River in Oswego County; Maxwell Creek in Wayne County; Irondequoit Creek in Monroe County; and Sterling Creek in Cayuga County to name but a few. Size doesn’t matter when it comes to the tributaries because essentially every creek, stream or river with water will have steelhead in them every spring – it’s their time to shine. And unlike New York’s April 1 trout opener for inland waters, Great Lakes waters are open year round for most trout and all salmon species.

There is also a corresponding Open Lake Angler Survey that is conducted from April 15 to September 30 each year. Just seeing those dates should signify that lake action traditionally turns on come April. Again, fishing action focused on species and methods vary from port to port, county to county. For salmon catching, many anglers traditionally head west in the spring. A mix of trout species can be found in all the counties along the lake.

Capt. Matt Yablonsky of Youngstown (716-550-0413), owner of Wet Net Charters (www.getthenetwet.com), has a variety of options when it comes to spring fishing in Niagara. One option is trolling the shoreline from Fort Niagara to Olcott. “Starting in late March and early April, we’ll catch a mixed bag of fish by trolling the shoreline with light (12-pound test) gear. As far as preferred baits, he leans toward Challenger stickbaits and MagLip plugs. “The Challenger Juniors are my favorites, with my best color patterns being emerald shiner, rainbow and brown trout in the spring. When I am running extremely tight to the shoreline, the J-11 Jointed Rapalas work best with the old tried and true black-silver color combo. They’ll only drop down about 3 feet. Yakima’s new 3.0 MagLip is proving to be a great lure in the river and the lake for steelhead.” When the water is on the clear side, Yablonsky runs more natural colors. When it’s stained, fluorescent colors like chartreuse and fire tiger work best.

Warm water is the key to early season fishing so Yablonsky targets the mouths of creeks where a warmer discharge will likely be flowing out into the lake. That water is generally off-color, too, and the darker water heats up quicker. “I like to put my boat right on the edge of the dirty and clean water,” insisted Yablonsky. 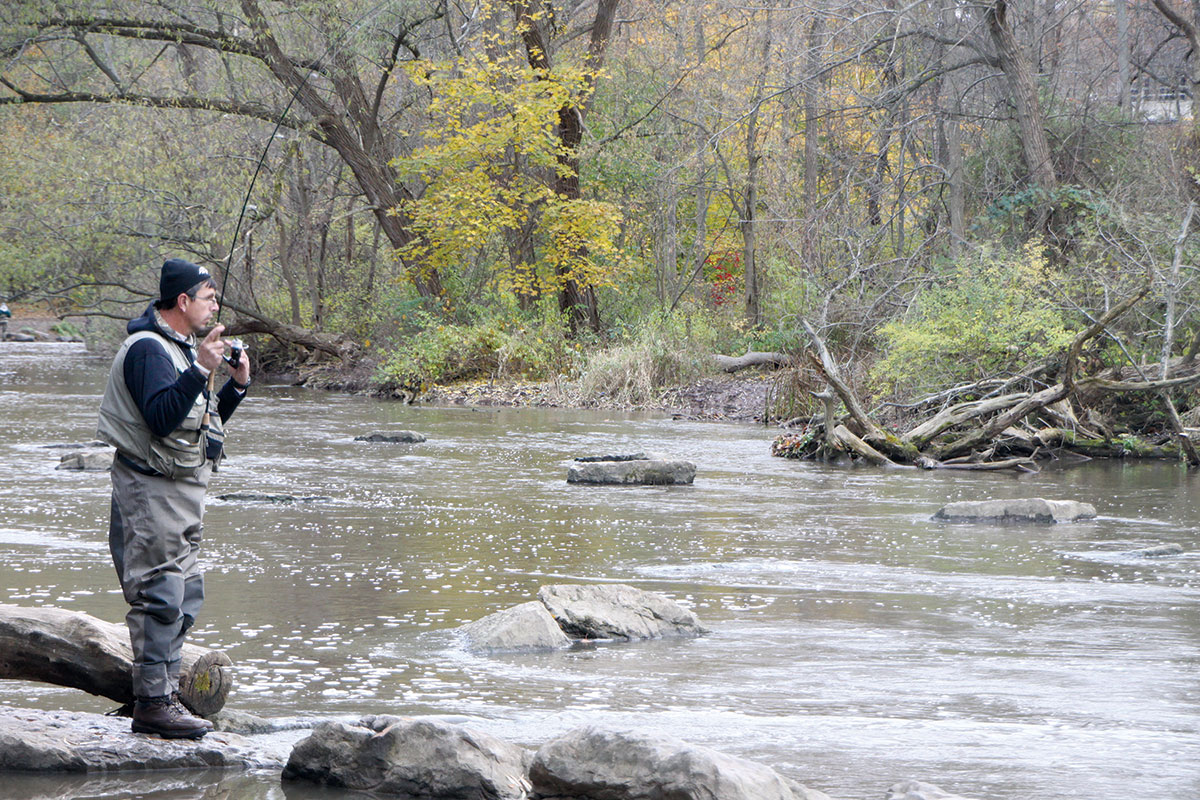 As waters start to warm and hit the 40-degree mark, Yablonsky adjusts his program accordingly – sliding out to slightly deeper water. The result is more of a mixed bag that includes browns, steelhead, lakers and Coho salmon. Even the occasional king will grab hold and take off. By the end of the month, the salmon program starts to kick in. Yablonsky heads straight to the drop off near the red buoy marker on the Niagara Bar as a starting point. He finds king salmon starting to concentrate in the 60- to 80-foot depths at the drop off, a huge ledge that extends for miles. It can drop off from 60 feet to over 200 feet in a short surface area. This is always a favorite area for the spring Lake Ontario Counties Derby, set for May 5-14 this year (www.loc.org).

Lower river options exist from boat and shore. In the river, boaters like Yablonsky can fish from Devil’s Hole to the Niagara Bar for steelhead, lake trout and brown trout with consistency until the end of May. Using a three-way rig to bounce bottom is the preferred technique for these fish. Egg sacs, egg imitations, minnows or wobbling baits like MagLips or Kwikfish lures work best. Shore fishermen are more restricted in that the best fishing options are in the gorge along Artpark, Devil’s Hole and Whirlpool state parks. Casting spoons, spinners or jigs top the list of hardware. Egg sacs or egg imitations also attract the attention of the trout.

At the eastern end of Lake Ontario is the Salmon River. Capt. Nick Lange of Totally Hooked Charters (845-594-3372) fishes both the lake and the main Salmon River, home to the Salmon River Fish Hatchery at Altmar. Where he fishes depends on how mild the winter is.

“We will fish steelhead on the Salmon river all winter long,” said Lange. “Come March the sun starts to get higher in the sky and more intense. The steelhead will start to pair up and transition from their wintering holding areas to the gravel. As things progress they will eventually spawn at some point between then and April. Once that happens they will return to the lake but as they are making their way back to the lake, they are hungry and very aggressive. This is what we call ‘dropback season.’ It lasts until the end of April or early May.”

“Tips for fishing between March and April are if you catch one fish there is more than likely another one with it. The most effective way to fish for them is float fishing. You can float fish with a spinning reel on a float rod. We use 10-pound test line for a main line and anywhere from 4- to 6-pound test fluorocarbon leader. As far as baits, we mostly use fish beads like Lazy Larry’s, 2- to 3-inch pink rubber worms and egg sacs. I’ve also had good success with baby night crawlers. Some guys prefer to fly fish for them. Egg imitations work, as do a number of different color stone flies.”

Once April comes along (or whenever the ice goes out), Capt. Mark Sabia of Northwoods Outfitters (315-427-1692) focuses on the river from his 17-foot Hyde drift boat. There are a fair number of guides that work the river from this style of drift boat and Sabia focuses on the stretch of water from Altmar to Pineville and Pineville to County Route 2A. Back-trolling lures like jointed Rapalas is one approach to catching trout, but if he finds a pool of fish he pulls up along the shoreline and has his customers get out and float fish with beads, egg sacs or jigs tipped with a wax worm.

Out in the lake, Sabia uses his 20-foot Lund Alaskan, trolling with planer boards in Mexico Bay off the creek mouths. Since he might be in 4 to 12 feet of water, water clarity dictates what baits he uses and what colors they are. Stickbaits like Smithwicks and Rapalas are his bait of choice, but Challengers, Bombers and Bay Rats are also used extensively. He also runs small spoons like Stinger Scorpions and Alpen Diamonds. He trolls as far as Stoney Point if the wind conditions allow for it. “We focus on browns out in the lake and steelhead in the river.”

Orleans County, home to the Oak Orchard River (or just the “Oak” by fishermen) is another spring hotspot. Waders and shore casters congregate in the river for steelhead or troll the shoreline for browns, Coho salmon, steelhead and lake trout. “Fishing in the lake starts with an assortment of stickbaits and spoons rigged to run the shallow water,” said Mike Waterhouse, a former charter captain who now works in the Orleans County Tourism office. “It starts out slowly at first with brown trout. Even beach casters can catch these trout casting spoons and spinners. Steelhead are readily available in the Oak until water temperatures chase them out.” In Oak Orchard, call Capt. Dave Huebner (609-462-6661) of Fish Lure Charters out of Kent, NY. 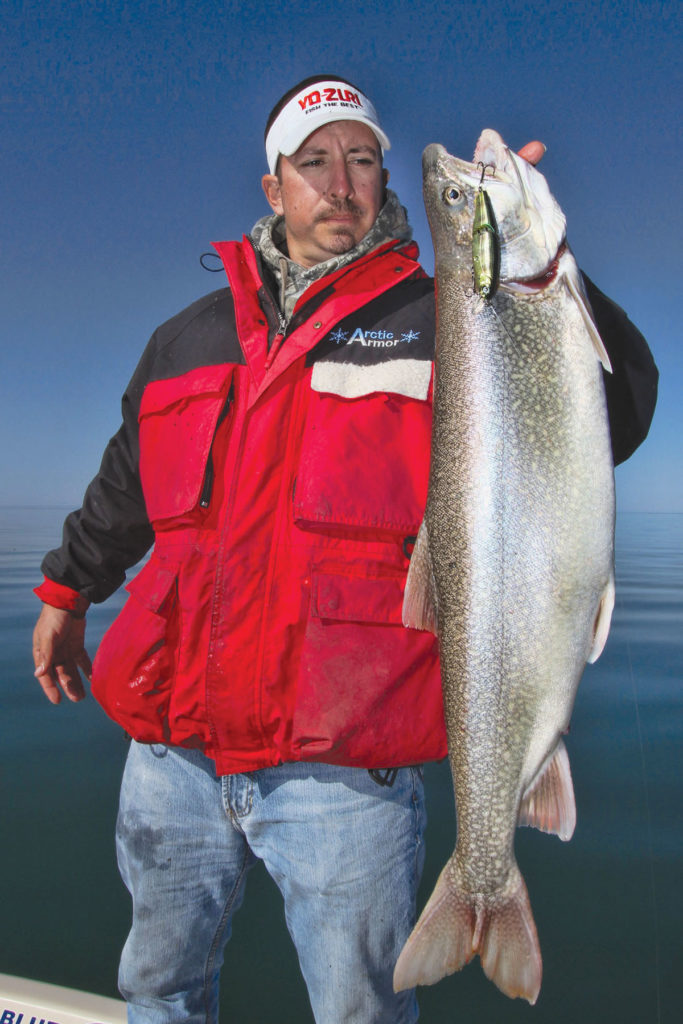 It’s not too much different over in Wayne County where brown trout are the focus in the spring, according to Chris Kenyon of Wayne County Tourism. The shoreline along Lake Ontario in the county is shallow. During late March the trout are cruising the shoreline for baitfish and fish can be taken from shore as well as by boat. Casting spoons is the preferred method for shore bound anglers. “Temperature is the key,” said Kenyon. “The shallow water warms first, attracting bait fish, and where you find bait, you find browns. A temperature difference of a degree or two could trigger fish to hit, so the outflow areas of creeks are the perfect place to connect with spring browns.” Local captains and guides seek out trophy browns by trolling planer boards as close to shore as possible, while searching for the highest temperature. If you locate stained or muddy water along with a two-degree temperature “jump” you’ll be in the browns. Stickbaits and spoons do most of the damage. As we get into the end of April, steelhead are added to the mix a bit more frequently. Springtime fishing on Lake Ontario also provides coho salmon action. The smaller cousin of the Chinook, the coho fights like a steelhead, and many anglers prefer the meat from a spring coho.