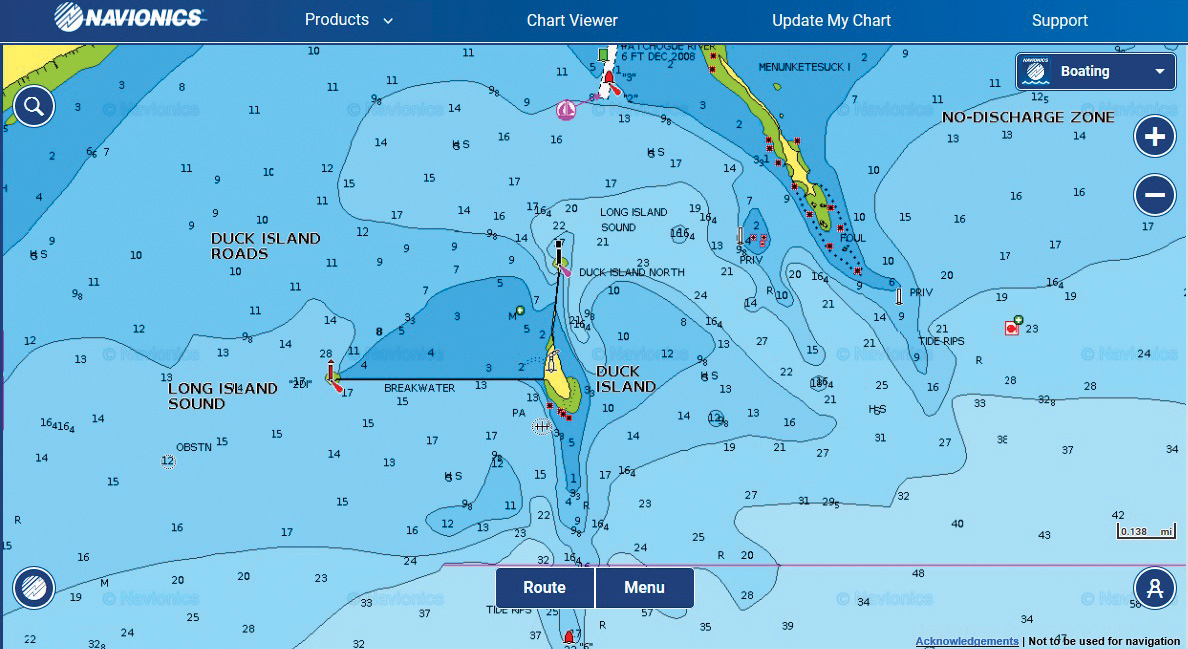 The Patchogue and Menunketesuck rivers flow south through Westbrook, CT, and provide a forage base for several species of sport fish in the harbor. When you study a chart, it would make sense that Westbrook Harbor is the confluence of these two rivers where they meet Long Island Sound at entrance Buoy 2. Technically, however, Westbrook Harbor is the shallow bay just east of Menunketesuck Island. But unlike other “harbors,” it’s not usually used as an anchoring refuge or fishing area because it offers little shelter and is littered with large boulders. Menunketesuck and Duck islands, both located a short distance from the beaches, are the main fishing features of Westbrook.

Duck Island, like other large islands along the Connecticut coast, has a rich history. Many years ago, it was used for a quarantine hospital for tuberculosis and smallpox sufferers. During the Prohibition period, “rumrunners” used the island as a cache for alcohol. Today, you can visit the island by skiff or paddle-craft and cast from its shores for stripers, weakfish and bluefish, but explore cautiously above the high-water mark because most of the island’s interior is covered with poison ivy.

During the summer season (approximately May 20 through September 10), however, Duck Island, like Charles Island off Milford, is closed to the public because it’s a sanctuary for nesting sea birds, especially herons and egrets. The island is designated as a Natural Area Preserve by the Connecticut Department of Environmental Protection, and “no trespassing” signs are posted around the island.

Duck Island features two breakwaters, one running north from the island and the other running west from the island. These create a safe anchorage between them, which draws about 4 to 5 feet of water. Along the south side of the western breakwater and along the east side of the northern breakwater, the depths are significantly deeper than on the shoreward side of the walls. These are excellent areas for blackfish. Try fishing near the ends of the breakwalls where currents course around the corners. But be cautious of entangling lobster pot buoys dotting these areas.

Striped bass and bluefish hold on structure south of Duck Island. About three-quarters of the distance from the island at Buoy 6, you’ll find tide rips forming where 40-foot depths surge upward to 15- to 20-foot depths. This is an excellent place to drift or troll, but be sure to stay out near the marker. Try using 4- to 5-ounce diamond jigs on the up-tide side of the rip to pull blues and bass from their bottom haunts. But the depths are only a few feet deep from approximately the halfway point northward to the island. If you have a shallow-draft boat and are confident with your navigational equipment and skills, these shallows are excellent places to cast surface plugs or live eels to the shoals. In particular, look for stripers around the large boulder (and wreck remnants on its west side) just to the south of Duck Island. Be wary of conditions when peak current opposes a stiff breeze because the rips can become rough.

Menunketesuck Island is a thin, gnarled stretch of ledge running northwest/southeast off Westbrook. It is often confused with Duck Island, but Duck Island is to the west and is the one with a tall chimney. The waters south of Menunketesuck Island form strong tide rips, and the depth remains shallow—about 6 to 9 feet deep—for about 500 yards to the southeast. Near the island you will see several passages between the rocks. The current pushes through the breaks and creates small rips on the east side. These rips, along with the waters around the last boulder above the surface farthest out from the island, are good spots for casting to stripers, weakfish and bluefish or anchoring for blackfish. The best fishing here is on a high, outgoing tide. If you are confident with your navigational skills and have a seaworthy craft, these rips are good places to explore during much of the season. If you strike out on bass and blues but have some bait onboard, the shoal water east of Duck Island is a likely place to anchor or drift for porgies and maybe even a fluke. 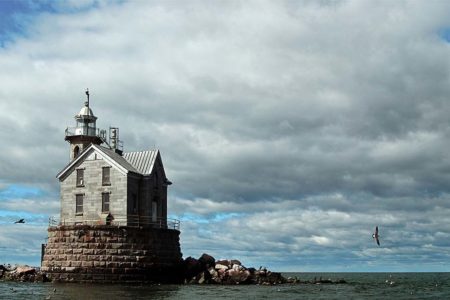 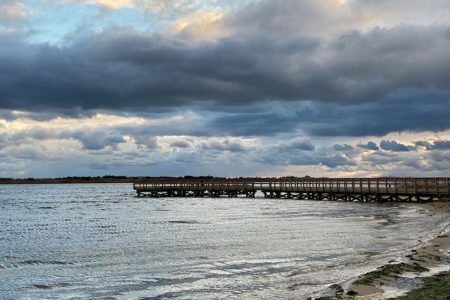