I was all set this month to let off some more steam about the new striped bass circle hook regulation. After last month’s Editor’s Log, and the ensuing flood of “Well, it looks like I’ll be ‘targeting bluefish’ a lot in 2021” comments that I received, I was in no way at a loss for content. But then, on the final day of 2020, I had an experience of which I’d like to share. Some of you may have read part of this as I posted it on both my Instagram and Facebook pages, but I expanded upon it a bit more so please read on and enjoy a moment of positivity in an otherwise chaotic world.

It’s no secret that 2020 was, to put it nicely, a dumpster fire. But through it all one thing kept many people going, and that is the ability to enjoy the outdoors. I am a hardened surfcaster with saltwater running through my veins, but in 2020 I expanded my interests greatly; among other things I picked up the fly rod after some 20-plus years off. Inspired early on by my friends Chris Wahl and Jerry Audet, and then further fueled by Steve Culton’s website (currentseams.com), Tim Flagler’s YouTube channel (tightlinevideo) and more, I set out to re-hone my skills on stockies before quickly moving on to night mousing for big brown trout and even adding an Atlantic salmon to my year’s catches on the fly rod. But it was on the final day of 2020 when I made my most memorable catch of the year.

For some time now I had a running tradition of fishing on the final day of the year, sort of one last push to get every penny out of my fishing license. Having struck out at my initial destination (a pipe dream of sorts looking for sea-run trout in a tidal where they once flourished), I was about ready to call it quits when I remembered a stream I had ‘virtually scouted’ this summer when flows were far too low to fish it. This stream had not been stocked in many, many years, but there was a very small population of brown and brook trout supposedly still residing there. Recent surveys by the CT DEEP put the figures at around 30 trout per kilometer so it was not my best bet for success, but I had time to kill so I figured, why not?

It had been some time since I scoured satellite imagery of the stream so I was running by memory and I drove up and down the road which runs parallel to the stream before eventually finding a parking spot I felt wouldn’t result in a ticket or angry neighbor. I packed my fiberglass 4-weight, forceps and a dry/dropper combo with a little nymph that Chris Wahl tied for me and set out on an adventure.

After a few hours of creeping along the water’s edge, sneaking up on several attractive pools on my hands and knees, fighting off about a million briars and mastering the bow-and-arrow cast, I came away successful as I landed two very wild brown trout and missed several other hits. 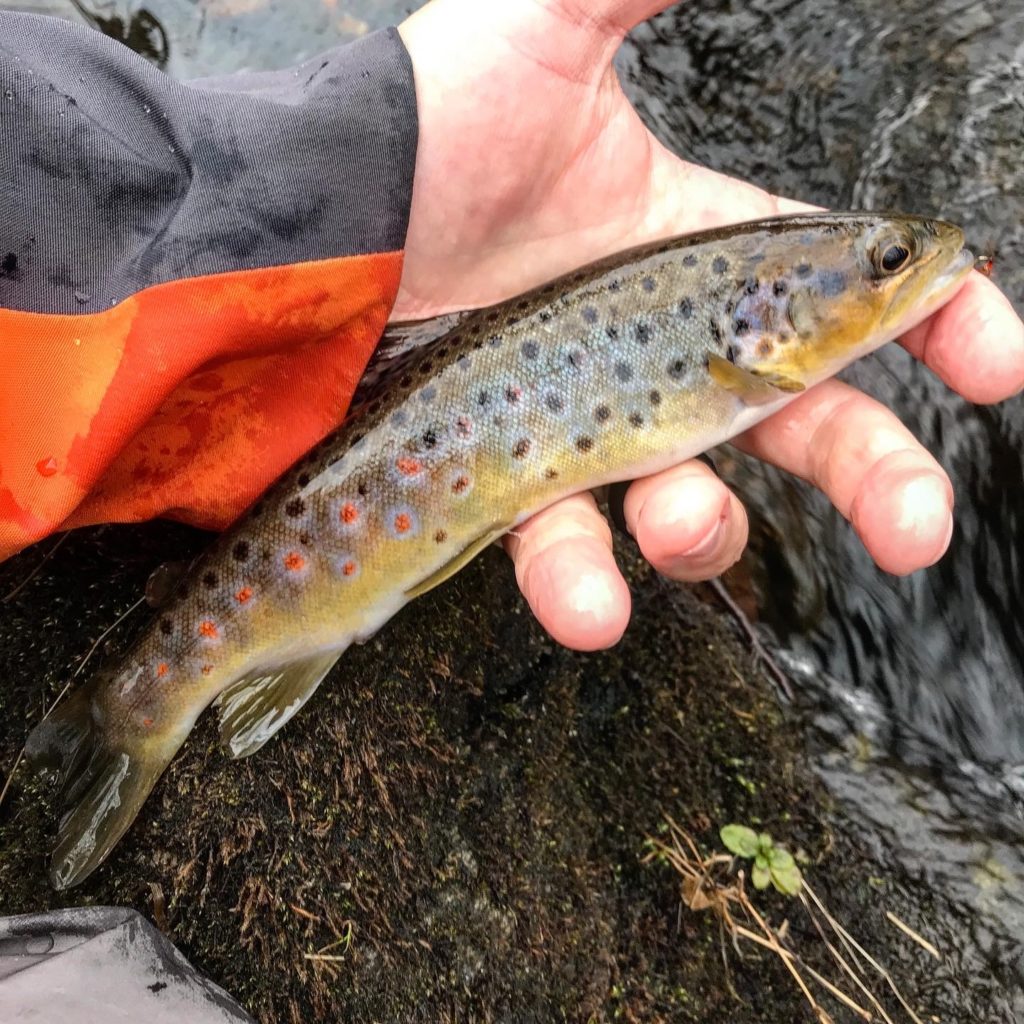 But this day’s success was not about catching, instead it was something deeper. Shortly after landing the first fish, once the echoes of my overly-excited screams and yells subsided, I sat down on a rock next to a pool and fell into a moment of reflection. I thought about how these little trout were able to make the most of this small stream through such a hard and dry summer, coming out alive and healthy on the other end, finding a way to survive in a quiet corner of the earth in which they call home. I’d like to think that we can follow their lead, overcome the difficulties which life hands us and scratch out an existence in our own little streams.