I learned when fishing on Cape Cod that people are always trying to get the drop on one another in terms of where the fish are, what they are taking, who is getting what and so-on. As a consequence, George, who was one of my acquaintances at the time, lived in terror of having someone come upon him when he was into a fish. On a particular night his wife, Barbara, had come along more to keep him quiet than any burning interest in the fishing.

That night beneath the flash of one of the lighthouses, we won’t say which, they found cows cruising the shallows. First attention had been drawn to it all by a subtle plop as a fish turned to inhale a sand eel. Then another. George’s plug was hammered by a fish just as the lighthouse completed a revolution, giving him a chance to see that these were no schoolies. He really never hooked the fish, but the sound of it throwing water so close to the beach had Barbara’s attention. Consequently, she developed a tendency to watch his retrieve while paying little attention to her own until her plug stopped cold.

“George?” she asked, fully conscious that this was not something with which she had ever been confronted. “George?!?!”

Under the flash of the lighthouse, this monster threw water for 10 feet nearly in her face when the explosion occurred causing her to back up with a fright. Turning, the trophy striper sizzled out into deep water, towing Barbara’s line and erasing all doubt in her mind as to what was happening.

He was beside Barbara within seconds whispering encouragement while she was hyperventilating with excitement. Why not? This was a great striped bass, Barbara’s first. “Zzzzzz,” line melted from the reel.

“Easy, Barb,” George cautioned, “your line is down a little, so you have to loosen the drag because that makes the reel tighter.” These were things that George knew about fighting a good fish as he coached her every step of the way. Then a light appeared in the eastern horizon, changing in intensity as the vehicle bounced on the sand trail. It was a sight that George had read many times. Knowing that she would never have this monster, this dream fish, in and away before it rounded the curve of the beach, George’s greatest fear was unfolding: having someone catch them catching.

Then the lights of the vehicle were on both of them as George sought to create a little space, make things seem more natural, more like the dead that fishing most often is like.

“Drop your tip, Barbara,” he admonished, seeming irritated that she did not know enough to do so herself. She lowered the rod. When the lighthouse completed another revolution, they both looked as though not a thing in fishing was happening. They were two boring silhouettes standing at the sea’s edge, and the buggy passed without even a notice. Then, as the vehicle faded safely out of sight, Barbara cranked a few turns to find her fish. She cranked a lot of turns, like a spool-and-a-half of turns, and her plug clanked harmlessly in the gravel. Her fish was gone. By dropping her tip she had violated the all-abiding universal dictum of anglers everywhere, giving slack to a fish that she probably otherwise would have caught. Here is what Barbara told me:

“I don’t get it, Frank. We spend the whole summer casting for these stupid fish. I mean that they have to be stupid when you look at some of the morons out fishing for them who do quite well, really. All you ever hear is that you have to keep a tight line. Finally, after eight million freaking casts, I got this monster that is over 4 feet long on my line. I know, I saw it! Will you explain something to me? Will you tell me why it is so important that no one sees us with a bleepin’ fish? I mean, what the hell? That is what we are out here for. Catch a fish and keep a tight line, right? I would rather have someone see it and catch me catching it than not catch me catching nuthin’. Like, hello? What is wrong with this picture, here? Why am I dropping my tip to give slack line? Worse, this Jeep that is going by doesn’t even have fishing rods. The guy is taking his girlfriend out on the beach without rods because he has something else in mind. Do you really think my catching a 50-pounder is going to change that? Hello?” 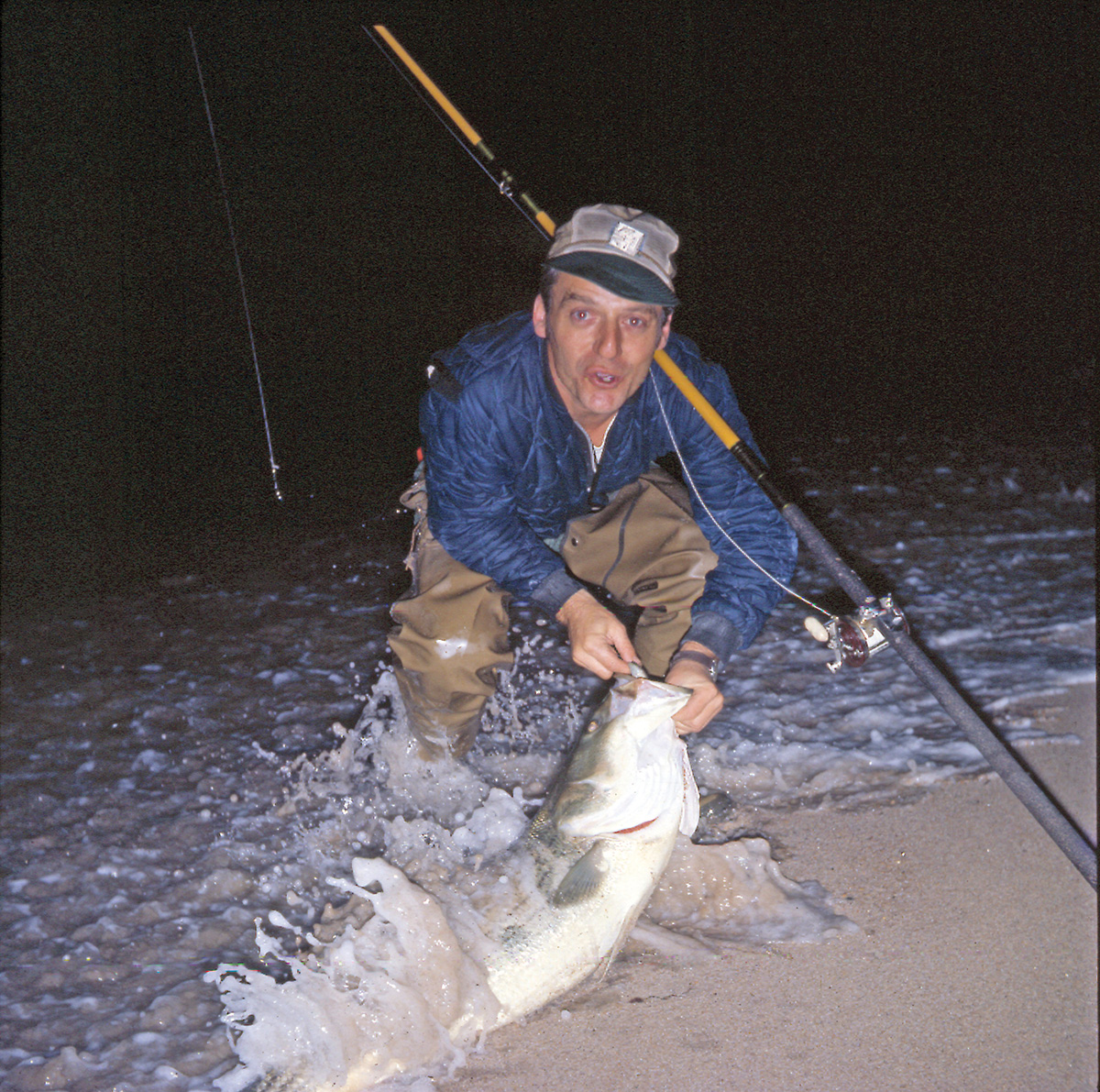 She is victim of but one of the Provincetown’s convoluted all-abiding dictums where fishing results is, depending upon your place in the continuum, a secret on one hand and source of greatness on the other. Everybody wants to know who is doing what in the local striper surf. There is more watching than fishing where everybody lies. The guys who catch bass deny it, and those who don’t exaggerate their results. They train CIA agents here by turning them loose in the closed surfcasting society of Cape Cod beaches. It is not about striper fishing; rather, it is about knowing who catches and who does not. It started at the dock where all the stripers were sold. Snoops gathering information peruse the weight slips on the desk in the office, which are left out in the open. Had Barbara been a high-liner regularly bringing in a lot of fish, regulars could determine her angling results for the previous week by checking out the slips. Once it was determined that she had found stripers, the blab would begin asking around about where they had seen her fishing.

The other side of this shell game was knowing how to stay out of the angling circles that formed up during every slack tide. Some sold their fish at reduced compensation to keep from having their names on the desk. Because the weight slips were a running account of one’s recent fishing success, I used to put down a load of “three bluefish,” which totaled 27 pounds at ten cents per pound and hand carry the drop slip upstairs to the accountant for 450 pounds of stripers going off to Fulton street for enough do-ray-me for a trip to Cancun with bordello passes the following winter. Nobody had any clue what the others in my family were catching. It was the IRS that caught me. Life is funny. While you’re running from one jealous husband, you break a leg going out the window.

The way the story goes the dock had bought some illegal swordfish from a Canadian trawler, which miffed the NMFS who used the IRS to punish the dock. In so doing they audited everyone with whom the dock had done business. Not the guys with 27 pounds of bluefish; no, they castrated the guys who beached $10,000 worth of stripers. All of a sudden there were no longer any secrets in P-town. Somehow getting a call from the IRS was a high liner’s badge and all the guys who couldn’t get social disease in Cancun said they were being audited.

I told you, as my old editor Frank Woolner used to say, “P-town was a cloud land of the cuckoos where an inexplicable societal shift turned secret catches into proof of surfcasting greatness.” Barbara should be glad nobody saw her catch, or even lose, that great striper.