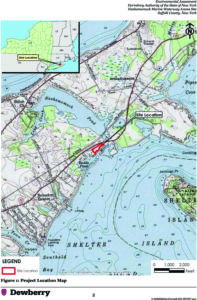 The new site will soon become the only publicly accessible launch ramp and fishing pier for NY State residents in this portion of the Peconic Estuary.

It has been a long time in the planning stages but the much anticipated creation of a state boat launch ramp with access to the Peconic bays and adjacent waters is finely a reality. Known as the Hashamomuck Marine Waterway Access Site, it will be the only publicly accessible launch ramp for New York residents in the Peconic Estuary. The Department of Conservation (DEC) purchased the 3.2-acre property, the former location of The Old Barge Restaurant which closed in 2009, from the Reiter family in 2013. The restaurant was destroyed during Hurricane Sandy in October of 2012, prior to DEC purchasing the property.

Purchase of the property was funded by a Federal Aid in Sport Fish Restoration grant from the U.S. Fish and Wildlife Service and a donation from the Reiter family, and is part of a larger effort and plan of the NYSDEC Division of Marine Resources to improve recreational and fishing access in the area. The project is supported by the Marine Recreational Fishing Access Plan and Generic Environmental Impact Statement prepared by the NYSDEC Division of Marine Resources in 1993, which cited a number of limitations on recreational and fishing access, and is part of a larger New York State effort to improve outdoor recreation facilities across the state. 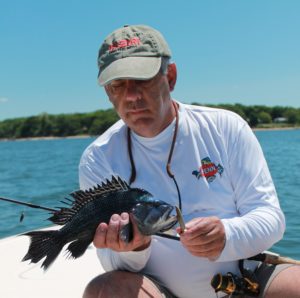 Since acquiring the property, DEC has been working through the lengthy process of designing, acquiring permits, bidding and meeting with the Southold Town Zoning Board. Construction was originally anticipated to begin by late summer of 2018. Instead, it began late last year and is expected to be completed by early this summer. It is located to the south of Old Main Road in Southold, just east of Port Of Egypt Fishing Station and Marina.

In addition to a double boat launch ramp, the site will contain a T-shaped fishing/observation pier with a 6-foot wide deck leading to the 10-foot wide “T” end section, 31 vehicle/trailer parking spaces, and seven vehicle parking spaces. There will also be a canoe and kayak launch, a floating dock with a marine pump station, a boat wash down station, a five-foot wide ADA accessible pathway loop from the parking area to the observation/fishing pier, portable sanitation (Port-A-Johns) and a picnic area.

Since being introduced to the outstanding fishing potential of these waters by Capt. John Paduano nearly 20 years ago, the Peconic Estuary has become one of my favorite springtime fishing destinations, despite the access limitations faced by non-residents. These waters are made to order for light tackle anglers targeting a smorgasbord of popular inshore species, including porgies, fluke, weakfish, striped bass, bluefish and sea bass. Many trips have seen all six of these species hit the deck over the course of a day, all taken while bucktailing with light spinning tackle. 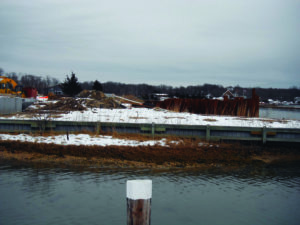 The bay is well known for its spring run of jumbo porgies, which attracts anglers from all over the Metro New York area and even New Jersey and Connecticut. Its popularity is best evidenced by the number of open boats from distant ports that focus their efforts on these waters during the month of May. Some of the best scup fishing can be found just minutes from the new ramp site. Most of these anglers will be dunking baits like clams and worms for the scup, but for the most fun, tip a bucktail or lead head with Gulp or FishBites. That combination will draw strikes from all of the aforementioned species and it is a lot more entertaining than dunking a sinker and bait rig on heavier conventional tackle. Bucktails patterned after forage like bay anchovies and sand eels are equally effective on all of these species when fished naked. The perfect outfit for these waters in May and June is a 6 to 6-1/2-foot medium action spinning rod matched to a 2500 or 3000 series spinning reel spooled with 10-pound test braid.

For many years, nearby waters were known for an exceptional run of doormat fluke which was fueled by an abundance of squid inside the bay. This fishing has dimmed in recent years, but a fair number of quality fluke are still part of the spring action for those working the waters off of Greenport and the Greenlawns along the west side of Shelter Island. These waters were also famous for their spring runs of tiderunner weakfish, but a sharp decline in yellowfin stocks saw this fishery virtually disappear for many years. The good news is there has been a healthy summer run of smaller weaks the past several seasons, and last year witnessed good numbers of spring run weaks ranging from four to 10 pounds. 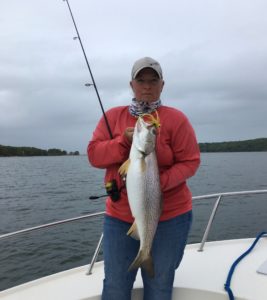 While the ramp won’t be completed in time to take advantage of this spring’s fishing, it is nice to know that the access will be there next season, and there is plenty of good fishing to be had well beyond the heralded spring fishery and deep into the fall. The Hashamomuck site will provide trailer boat access to some of the best inshore fishing on the Island as it puts you within range of such hotspots as Jessups Neck, Rose Grove, Nassau Point, Robins Island, South Race, Noyack Bay, Rogers Rock, Greenlawns, South Ferry, Gardiners Bay and Plum Gut. Noyack Bay has been hosting excellent mixed bag action for weakfish, porgies, blowfish and sea bass during the summer and fall months. Gardiners Bay usually sees a good summer run of fluke and the fish rich waters around Orient Point, especially Plum Gut, provide steady striped bass and bluefish action throughout the season (the ride from Hashamomuck to the Gut is about 12 miles).

The Hashamomuck Marine Waterway Access Site will be the fifth waterway access site developed and maintained by DEC. The most recent addition was the Mattituck Creek Waterway Access Site, an impressive facility that provides access to the waters of Long Island Sound. It includes a two- lane launch ramp, parking for up to 60 cars and trailers, a fishing pier and a separate dock designated for kayaks and canoes. The Oyster Bay Western Waterfront Waterway Access Site features a boat ramp, parking for 20 cars with trailers, and a 500-foot fishing pier. It provides access to Oyster Bay Harbor, Cold Spring Harbor and Long Island Sound. Oyster Ponds Waterway Access Site is located on the Sound in East Marion, adjacent to Truman’s Beach. It has parking for 24 cars with trailers and 6 car-only spaces, a limited access sand and gravel beach boat launch for small boats (4-wheel drive vehicles are required), launching for canoes and kayaks, and surf fishing access. The Moriches Waterway Access Site in East Moriches provides limited access to Moriches Bay via a shallow water/small boat concrete launch and hand launch. It has parking for 12 cars with trailers and 18 car-only spaces, and fishing is allowed from shore. For more information and directions to these DEC managed sites, go to https://www.dec.ny.gov/outdoor/7780.html. 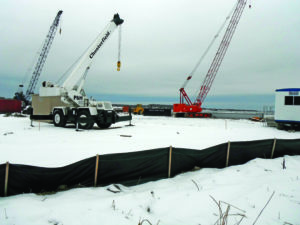 If all goes as planned, the Hashamomuck Marine Waterway Access Site should be opening later this year, possibly by the Fourth of July. This is another feather in the cap for DEC’s Division of Marine Resources and fills an access void that has plagued New York’s angling community for many years. The parochialism of Long Island’s townships has made access to certain areas very difficult. This new site is another big step toward providing more access for all anglers, as well as local residents.