Size matters.  And bigger is not always better.  This is readily apparent when it comes to the Townsends Inlet Reef and the superlative fishing opportunities it affords, especially as summer melds into the autumn season.

At a blink-and-you’re-by-it .52 square mile size, it is the smallest in New Jersey’s artificial reef system, sandwiched between the Wildwood (2.1 square miles) and Cape May (the largest at 4.5 square miles) reefs to the south, and the .8 square mile and 1-square mile Ocean City and Great Egg reefs respectively.

“That (being the smallest) works to the advantage of those who know how fantastic the fishing is there,” said New Jersey Bureau of Marine Fisheries senior biologist and its Artificial Reef Coordinator Peter Clarke, adding that with the multiple deployments in 2006, 2008, 2010 and 2017, the Townsends Inlet Reef is a rod bending hotbed for a potpourri of species, as the majority of angler attentions are concentrated and expended at the aforementioned sites.

Established in 2005 with an initial 8,406 cubic yards of material that included a pair of 77-foot commercial fishing boats, a 31-foot crew boat, concrete castings and fields of reef balls, the near perfect rectangular-shaped Townsends was bulked with junction boxes, a trawler, concrete culverts and an amalgam of other materials in ‘06, ‘07 and ‘10. 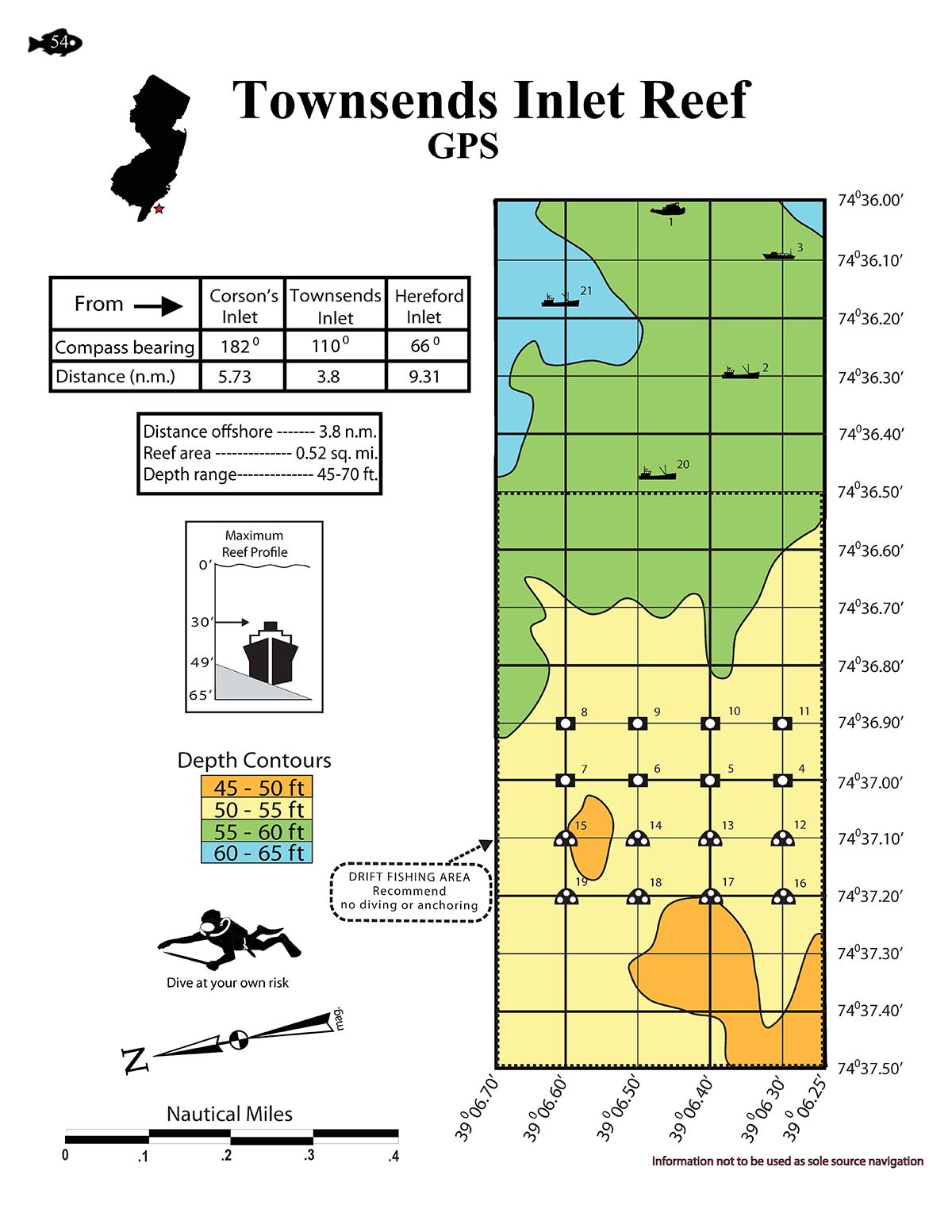 In 20017, there were 27 deployments of dredge rock (received free-of-charge from Great Lakes Dredging) totaling 60,000 cubic yards (30,000 square yards) that equates to almost a half-dozen football fields. Add a trio of deck barges, a 90-foot trawler, and 14 huge chunks of the old Townsends Inlet bridge, and it’s obvious to those-in-the-know that, in this case, smaller can definitely be better. The amalgam of drifting and bottom dropping areas make this structure a definite September-through-November go-to.

To its well-deserved credit, the high octane Strathmere Fishing and Environmental Club has been instrumental in sponsoring (read: forking over the $$) these and, according to Clarke, future deployments that are under review.  Located 3.8 nautical miles (nm) from Townsends Inlet, 5.73 nm from Corson’s Inlet, and 9.31 nm from Hereford Inlet, the Townsends Inlet Reef has a maximum depth of 70 feet and a top end profile of 30 feet.

As you read this, fluke are vacating offshore but will nestle and feed in and around not only the spreads of reef balls, but also on the concrete castings and also around the barges and trawlers. With the September 19 season ending, drifting snapper blues, small spot, salmon bellies, finger mullet, squid and/or sea robin strips sweetened with spearing, and the bigger profile bucktail/5-6 inch Gulp! Combo (Nemesis/Grub/Swimming Mullet) will have the coolers thumping.  The prime drifting area is highlighted at www.njfishandwildlife.com, with a click to the saltwater fishing link and then a visit to the Artificial Reef legend.

The structure makes the Townsends Inlet Reef a hotbed of bottom dropping activity. Blackfish are omnipresent, but the green and cancer (white legger) crab crunch really gets going around early November just as the annual fall bag limit is increased.  Tautog to 6-plus pounds are not uncommon for those deploying both rigs and jigs, all with crab attachments.

“An awesome sea bass spot,” exclaimed Clarke, noting that the October season opener coincides perfectly with Townsends close location to shore.  The structure is magnet for bait, and the sea bass inhalation is near non-stop, interrupted only by the likes of AVA-17, 27 and 47 jigs (based on current strength). Fish to 3-plus pounds going in the coolers is expected.

Also on the Townsend’s September/October bite includes the hard fighting and delicious triggerfish and wrist-snapping sheepshead…a kick bottom butt duo. Triggers to 4 pounds and sheepshead to 10-plus pounds are the norm.  The late summer into early fall action is terrific at Townsends as well for the likes of cobia, king mackerel, and mahi as the pelagics pull through. A troll-through, but pitching baits and bucktails plays a part in the cooler count.