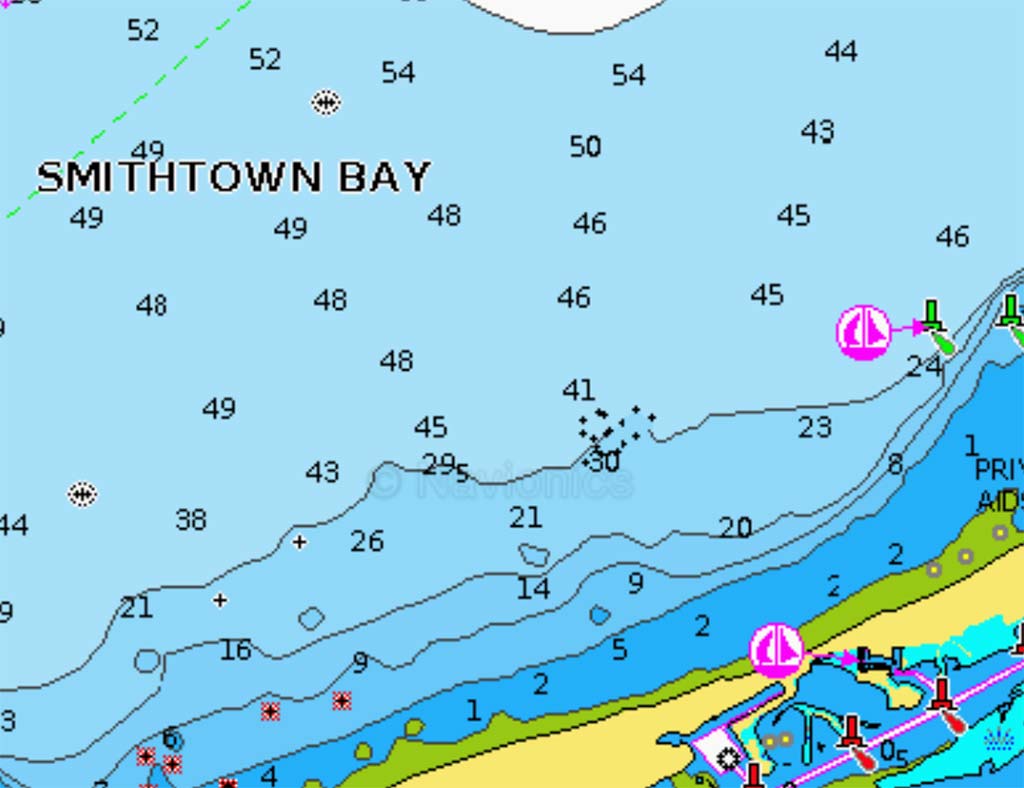 Tucked between the former LIPA Stacks and Cranes Neck in Long Island Sound is Smithtown Bay where each spring a myriad of baitfish settle into this piece of the Sound for their annual spawn, attracting such species as fluke, sea bass, porgies, weakfish, bluefish, and stripers that target the shoals in the bay, as well as the Nissequogue River and Stony Brook Harbor. Both the river and the harbor are part of the bay’s watershed. Water depth ranges from a few feet off the beach to 50 feet just as the bay borders into the Sound. Although Smithtown Bay caters to fluke fishermen during May and June, the real oasis in the desert comes from the Smithtown Reef where a revitalization in 2018 has once again made this reef a serious blackfish haven for the fall season as well as some fine sea bass and porgy lairs throughout the summer months.

The Smithtown Reef (N40.55.975/W73.11.170) sits in 38 to 40 feet of water and was home to five large barges and thousands of concreted tires until the spring of 2018 when Governor Andrew Cuomo announced the inaugural deployment at Smithtown Reef, which included recycled materials from the Tappan Zee Bridge project, Department of Transportation, and New York State Canal Corporation. State agencies began deploying barges of Tappan Zee Bridge recycled materials and decommissioned vessels that have been cleaned of contaminants. In total, 43,200 cubic yards of recycled Tappan Zee Bridge material, 338 cubic yards of steel pipe from DOT, and 5,900 cubic yards of jetty rock were added to the 12 artificial reefs that surround Long Island. In addition, two, 40-foot decommissioned Erie Canal vessels and 75 tons of recycled materials from deconstructed Department of Transportation projects were deployed to the Smithtown Reef as part of the historic expansion of New York’s network of artificial reefs. Materials used for the Smithtown Reef expansion were strategically placed and built out of hard, durable structures such as rock, concrete, and steel pipes, and in the form of surplus or scrap materials that are cleaned of contaminants, which has already impact sea life on the reef as blackfish, black sea bass, porgies, and fluke all plan to return in 2021 to take hold of the new structures, feeding on encrusting organisms such as barnacles, sponges, anemones, corals, and mussels that cling to and cover the material. Over time, these recycled structures will create a habitat similar to a natural reef.