A few helpful tips to consider when livelining for stripers.

Live bunker is an exciting way to entice stripers of all sizes. Cast netting and snagging are ways to obtain them, and keeping them in a livewell without overcrowding is important so you don’t stress them and deplete their slime coat. Also, take all bleeders out of the livewell and any dead pieces and put them in a cooler with ice as they will make great chunk baits.

I like to use a Gamakatsu 8/0 circle hook; when fish are marked or crashing bunker on the surface I simply place the hook before the dorsal fin and toss it out and this allows the bunker to swim freely. Since stripers typically swallow their prey head first, having the hook placed in this area allows the striper to ingest the bait and the hook tears away from the meat for a great hookset. Nostril placement is another option. This allows you to slow troll as well as cast it a great distance; though not my favorite, it does produce. 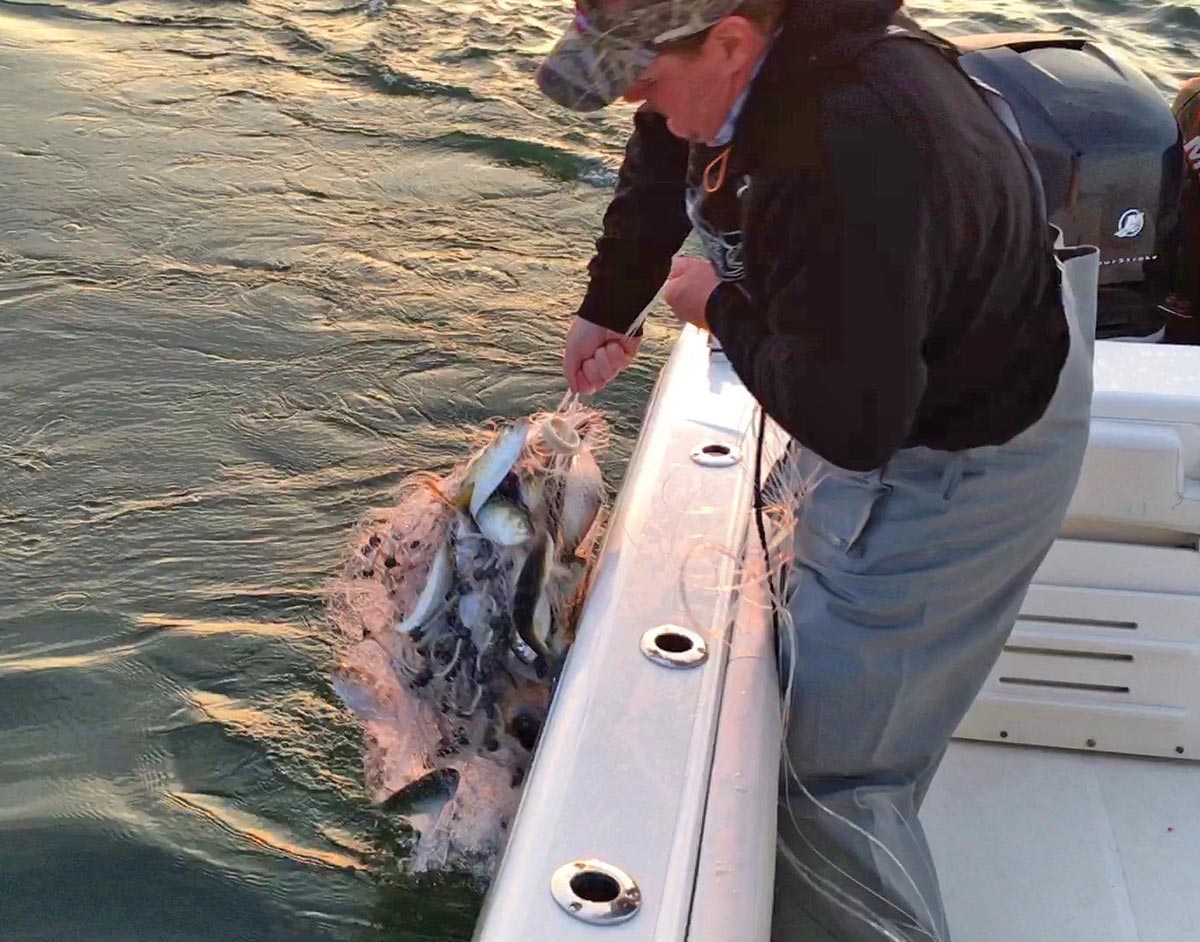 A common question I receive at seminars is, “What do I do when I mark stripers in the mid to lower portion of the water column?” Say you mark fish 30 feet down and your overall depth is 60 feet. If you happen to have a conventional reel with a line counter you can simply deploy your bait to that level with the help of a weight. But what if you do not and how do you get the bait to sink to that level? I like to use a three-way swivel with a 4-foot length of 50-pound fluorocarbon leader tied to an 8/0 Gamakatsu circle hook.

To quickly get that bait down in that 30-foot strike zone tie off the last leg of the three-way swivel to a 1-foot length of leader with a loop and get a 3- to 6-ounce bank sinker (The strength of the current will determine the weight as you want it dropped right below you and not scoped away from the boat.) and hook your bunker right in front of the dorsal. Put the reel in free spool; then take 10 arm lengths of line and slowly release the bait. Your arm is roughly 3 feet long and 10 pulls will put your bait in the 30-foot zone.  If bass are suspended say 15 feet down just take five arm pulls of line.

Some fish with a fish-finder rig but many times the sinker will go down and if the bunker is strong, it will most likely lag behind and above the weight and won’t be in the strike zone. Another tip if your bunker is too lively is to simply take a scissor and trim the lower tail fin to slow the bait down and give it more visible signs of distress, which stripers love. If you have four anglers on the boat, have one throw a surface popper to create a disturbance; not only could you find an exciting top water bite, it sometimes attracts stripers to the boat to target your live bunker. Unless there are bluefish around, you could also chunk some of your dead bunker to chum a few stripers into your zone. As for tackle, I like to use the PENN Fathom 25N with a star drag with 30-pound Berkley Pro Spec Mono on a PENN Carnage II (CARBWII2050C70), paired to a Spro 130-pound barrel swivel tied to 50-pound fluorocarbon.  When you select your circle hook, choose one that has at least 3/4-inch clearance from the point of the hook to the shaft; anything smaller will not adequately get around the jaw of a large striper.  Remember, that circle hook is designed to safely hook the fish in this area; if it is too small it will simply come out of the mouth, and the fish will swim free. 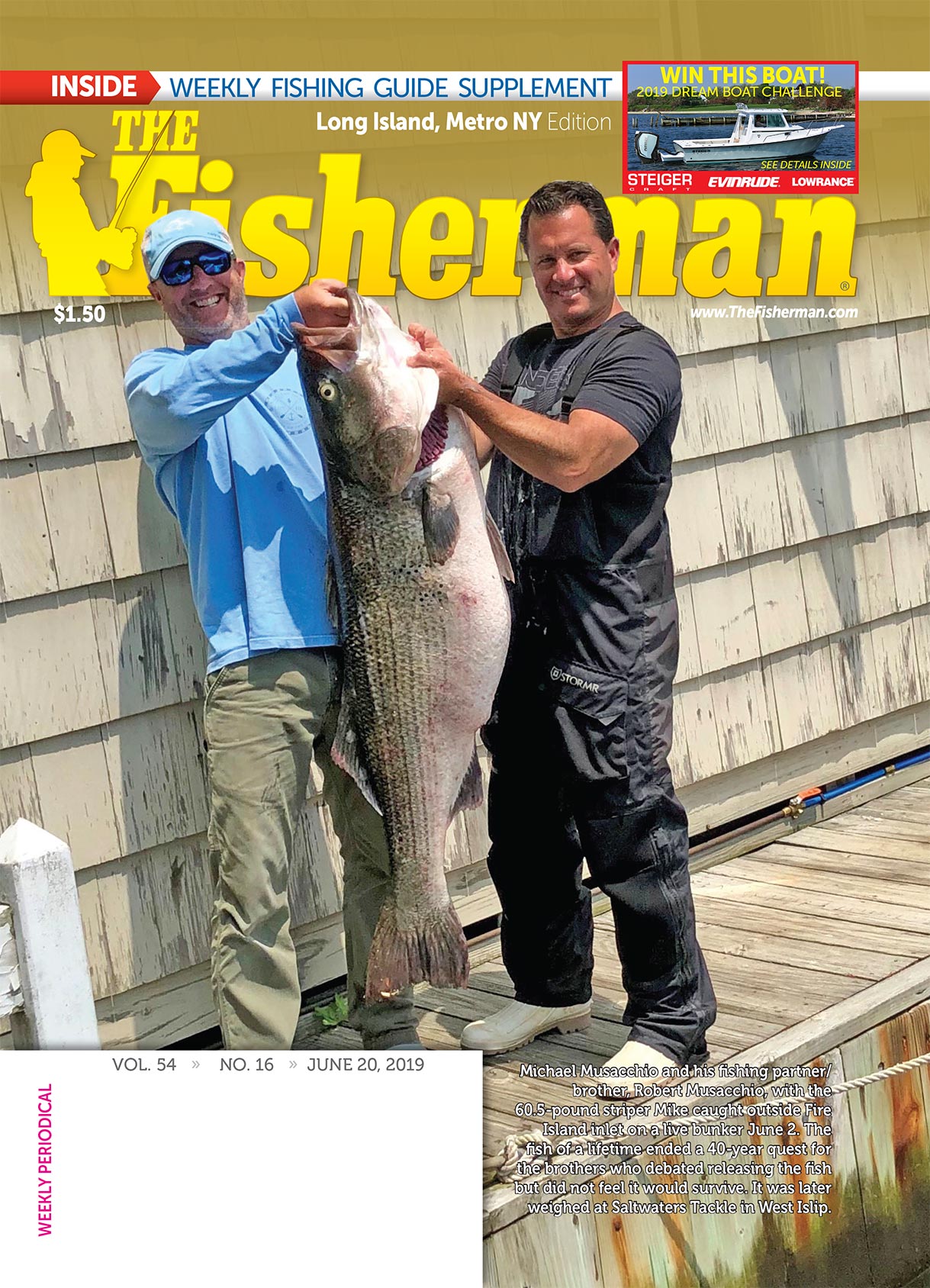 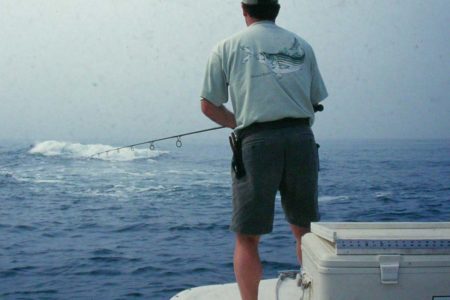 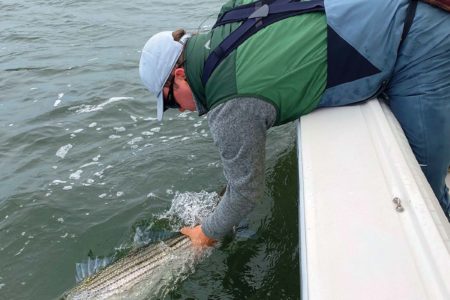 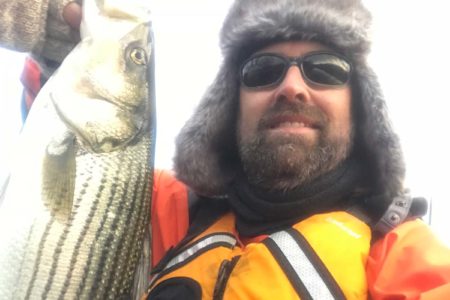