For anglers across New England, tautog fishing is as synonymous with fall as pumpkin picking, corn mazes and apple pie. As the leaves begin to change, and other species start to move out, tautog fishing starts to really heat up. Tautog, commonly known as blackfish, is a species of wrasse found in coastal waters of the mid-Atlantic and New England. Primarily residing around rock piles, reefs, and wrecks makes them a fairly easy fish to find but not necessarily easy to catch. Their diet mainly consists of crabs, lobster and shellfish, which make them a great fish to target with bait. Although they can be caught on artificial lures such as the Hogy Epoxy jig, the best choice for tautog is live crabs. When many think of fishing for tautog, deep-water wrecks, heavy bank sinkers, stout conventional rods, and nasty weather come to mind. Not necessarily shallow water 1-ounce jigs, spinning rods and a kayak as the platform.

A kayak is a great platform for targeting tautog as it allows you a level of precision that you couldn’t get from a power boat. I’ve been on boat trips where one corner of the boat is producing fish but the rest is coming up empty. This isn’t an issue when in a kayak since you can anchor up exactly over a specific rock or structure. Over the years my approach to kayak tautog fishing has changed vastly. In my early years, I only used conventional gear with a high-low rig and opted to drift over a rock pile or along a break wall. I found myself getting fish but it really wasn’t the best approach. I started using a 3-pound grappling anchor several years ago but found it could get expensive at $20 apiece when you get it stuck in a rock and can’t retrieve it. In more recent years Shawn Barham, a local kayak tautog guru, gave me the idea of using a brake rotor/drum instead of a traditional kayak anchor. It holds bottom just as well as an anchor would when used with a kayak but doesn’t get snagged as easily. If it does, it’s fairly easy to acquire used rotors from your local car mechanic.

Many kayak anglers, including Shawn, prefer an anchor trolley because it allows them to precisely position their anchor along their boat between the bow and stern. I don’t like having extra lines attached to my kayak so I use a different approach. I attach a small pulley with a carabineer to the bow of my kayak that the anchor line slides through. Below the pulley I have the anchor line going through a large plastic ring and attached to the ring is a floating nylon rope. I can use the rope to retrieve the anchor from my bow and position it as needed.

When anchoring in a kayak, be very careful when anchoring off the stern or broadside. Make sure you allow some slack between you and the anchor so that you don’t swamp or flip the kayak. Anchoring broadside can be extremely dangerous in a kayak if it is at all choppy, especially when tight to structure.

One of the biggest benefits to fishing a spinning rod when jigging tautog is it’s very easy to maintain contact with the jig. When fishing a jig for tautog, I’m not jigging at all but using the jig to present the crab on the bottom and keeping tight to it; any small peck or grab is usually felt fairly easily this way. Tautog jigs are essentially just banana jigs with a beefed-up hook and a fancy paintjob that is supposed to mimic the guts of a crab. The jighead sits on the bottom in a manner that presents the crab above it. The shape of the banana jig also helps reduce snagging on the bottom.

I still use a conventional rod/reel setup at times with a traditional high-low rig and bank sinker, but the past few years I’ve really taken a liking to jigs with the spinning rod. It’s not only easier but to me it’s more fun using a light spinning rod especially in shallow water with the kayak. It also allows me to cast the light jig easily to work different rocks around me, not just directly below my hull.

My preferred setup is the Lamiglas Black Salt BS725 rod paired with a Shimano Stradic 5000K reel and 40-pound braid. The rod is 7 feet 2 inches and is a composite rod with a very soft tip but a stiff mid and butt. This is very good for tautog jig fishing because the soft tip allows me to feel the subtle take that tautog are so commonly known for, but since the rod loads quickly it gets a solid hook set on the fish and helps keep them from digging into the rocks. The composite blend of the blank keeps the rod from blowing up if you over pressure it by high sticking. When fishing for tautog, high sticking is common practice, especially when prying them away from structure.

Since these fish love digging into the rocks and seem to always know their escape plan prior to ever taking the bait, I use 10 to 12 feet of 50-pound fluorocarbon as a leader and pre stretch it before fishing. The pre-stretched fluorocarbon gives a bit more sensitivity and a faster hook set. My preferred jigs have been the Joe Bagg’s Togzilla in 1 to 1-1/2 ounces, which use a Mustad Dura-tin hook that doesn’t bend out easily. Plus Dura-tin is easy to sharpen with a diamond stone. Shawn Barham prefers the same jigs but uses a 7-foot MH baitcasting setup as opposed to my preference of a spinning rod.

Green crabs overall are the crab of choice for many anglers in my area, but Asian crabs are becoming more and more common. Asian crabs can now be found all over the shoreline of Long Island Sound and have pretty much taken over. It appears as more Asian crabs are around, the better they are working. Some days it really doesn’t matter which is being used but I always try to head out with a bucket of each. The disadvantage of the Asians is they are smaller so I go through them quicker, especially when smaller fish or scup are present. Because of how small they are, I often use two at a time when putting on the jig. When using green crabs, I cut them in half and cut the legs/claws off then put the hook through one socket and out another. The leg/claws are chucked over the side of the kayak as chum. The halved crab allows me more use out of the bait.

I prefer to usually fish in water that is 8 to 15 feet deep when fishing jigs, but I have caught keeper tautog in water as shallow as 3 feet from the kayak. Having a good fishfinder that shows bottom well really helps positioning precisely on structure. I try to drop my anchor just up-current of the structure I want to fish and then let out the appropriate amount of anchor line to position over it. If nothing happens for a while, I adjust my position with the anchor line a few times before moving to a new spot.

Most often overlooked by many and the last thing that should be skipped out on is safety gear when heading out in colder water. In Connecticut a life jacket is mandatory to wear on a kayak after October 1, but even if it’s not a requirement in your area, it’s a necessary piece of safety equipment this time of year.

A dry suit is also something worth purchasing for cold-weather kayak fishing. As we get into the later months, I wear a full Kokatat Super Nova dry suit. This ensures that if for some reason I were to end up in the water I would be dry and increase my chance of survival. Earlier in the season, I wear my two-piece Kokatat Tempest dry suit.

It is a pair of waterproof dry pants and a waterproof dry top with gaskets. If you already own a pair of breathable stocking foot waders, you can use those with the Tempest dry top and an extra belt to stay safe out there in the fall time.

The two-piece dry suit allows me to shed layers easily as needed. As the morning warms, I take the top off a lot of times if it’s a calm day. There have been cases where the water has still been flirting with 70 degrees during the fall season and the air temp allowed me to strip down to just shorts, but that is rare.

Fishing for blackfish is a great way for the kayak angler to extend the season. Be sure to keep safety a top priority. 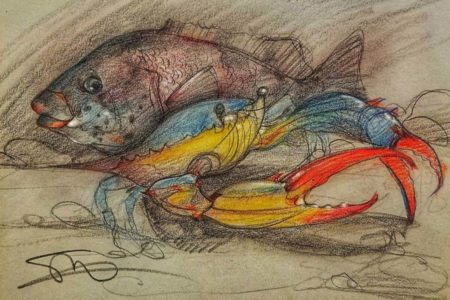 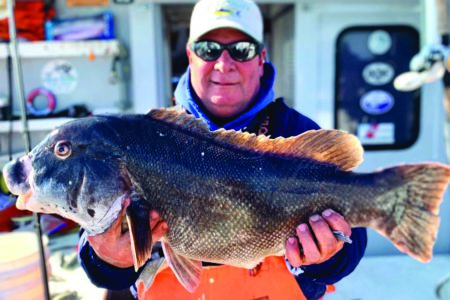 The quest for personal best requires a dedicated effort.