Three lures to use from the beach or boat when the last dinner bell rings for stripers.

The official end of the striper season is coming and while that date is the 15th for marine waters in New York, keep in mind the fish migration does not always follow calendar dates and stripers can continue to be caught and released right through December and in some cases over the winter months too.

Usually these late season fish are smaller in size and the use of heavier tackle becomes pointless and using it takes the fun out of trying for them. Typically in most cases, late season striper fishing for schoolie bass is a light tackle game with rods from 6 to 8 feet for better feel of finesse lures and getting more out of the fight from a striper under 30 inches.

According to the Merriam-Webster dictionary the word finesse is defined as refinement or delicacy of workmanship, structure, or texture. While this definition does not mention anything about scaling down tackle and profile, finesse when it comes to fishing generally revolves around going lighter and smaller. If you’re wondering what lures I consider ‘finesse’ for late season stripers, here are three that immediately come to mind that I’ve had success with over the years in combination with light tackle.

Available in a few different sizes, this lure has always been a go-to for me throughout the year actually. Typically finding a lot of use around bridges and in the back bay or even fished vertically off a boat for weakfish in the spring, this lure is versatile. The versatility extends into the late fall and winter months of the year also and sees action with the late stripers making their way down the coast.

While a few different sizes are available, I always gravitated towards the 5-inch model as opposed to the 7 inch or 3 inch. Don’t get me wrong, I’ve used the 7 inch when looking for bigger fish around bridges and the 3 inch for fishing tidal creeks in the dead of winter but for what we’re talking about here, the 5 inch gets the nod and does a fine job at getting the attention of fish from schoolies into the slot.

When fishing an Assassin, it’s pretty straightforward. My general rule of thumb is to fish it with a jig head that is heavy enough to cast and get to the bottom but not heavy enough where it will sink to the bottom like a brick. When the lure is dropping is when you will get 90 percent of your hits and having a jig head that is too heavy will cut down on the finesse aspect of the lure resulting in less interest from a striper. From there, a jig of the rod and retrieve of the slack method is what I use. I repeat this motion until the lure is close in and then start the process again. One tip I can offer is to keep the line semi-taunt so you don’t miss those hits on the drop. Using a hi-vis line helps with watching for these sudden hits. One last tip I can offer before moving on is to make sure your bait is rigged straight on the jig head and not kinked. A poorly rigged bait does not work the way it was intended to.

While a bucktail is available in sizes up to a pound in extreme situations, we’re going to along then theme of light and finesse for bucktails in this feature. Another deadly finesse lure that you can employ for stripers in the late season is the simple bucktail jig, with or without a trailer. For those wondering, a trailer for a bucktail can be anything from a synthetic bait strip, to a pork rind and also a curly tail.

For this type of fishing, the jig itself should be in a weight range from 3/8 to 3/4 ounces. Going any higher defeats the purpose of being finesse and you would have to move up to heavier tackle. The nice thing about a bucktail is that the hair tied on a jig possesses natural buoyancy and helps the jig flutter its way to bottom in an appealing way to a striper. Some jigs have more hair than others also. You can find a jig with the right amount of hair in combination with weight to get the casting distance you want with a slower sink rate also. If you are fishing deeper water maybe finding a jig sparsely tied could be beneficial to your fishing by getting down to the bottom quicker.

Fishing the jig itself is very similar to fishing a Bass Assassin. Casting out and letting the jig sink down, popping it up and taking enough turns of the handle to bring in the slack is a proven method for me. If you find you jig hitting the bottom too fast where it almost feels like it’s dragging, it would be wise to go with a lighter one to get more flutter out of it.

I try not to get too crazy with bucktail colors. Keeping it simple is my motto with them. White is my main producer but chartreuse or yellow will see some use too at times and they have produced great also. Trailers usually are the color red, white, yellow or chartreuse.

These can be externally or internally weighted but for I’m going to focus on the internally weighted models for their ease of use and popularity. A swim shad is a soft plastic bait that is usually molded to mimic the profile of baitfish or several different sizes. The shads are equipped with a paddle tail that will swim as it is retrieved or falls through the water. Some swim shads can have very lifelike characteristics that can almost replicate certain bait to a tee.

Two major brands that I swear by along with many others are Storm and Tsunami. Both companies make these swim shads in different patterns and sizes that do a great job at catching stripers during the late season. They’re both internally weighted which makes fishing them easy. You don’t have to hassle with finding a jig head and while this can be a native also since you’re also stuck with one weight, these shads usually are still pretty versatile and get the job done under a number of different conditions.

For the end of the season the 3, 4 and 5-inch models mimic most baits that the smaller stripers will be feeding on and they can also be worked with lighter tackle efficiently as well. The shads work well when the tail is working so more of a steady retrieve is what’s wanted when fishing them. I like to incorporate a little twitch or lift or the rod once in a while when using a steady retrieve just in the event that a follower is deciding to take a swipe or not. Most of the action will come from the tail though so don’t make it a job to always mix in that extra action. 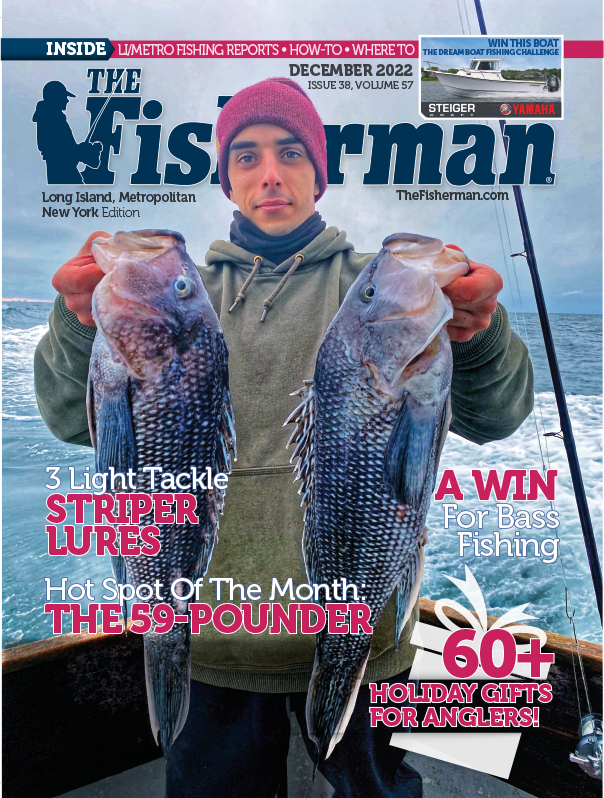