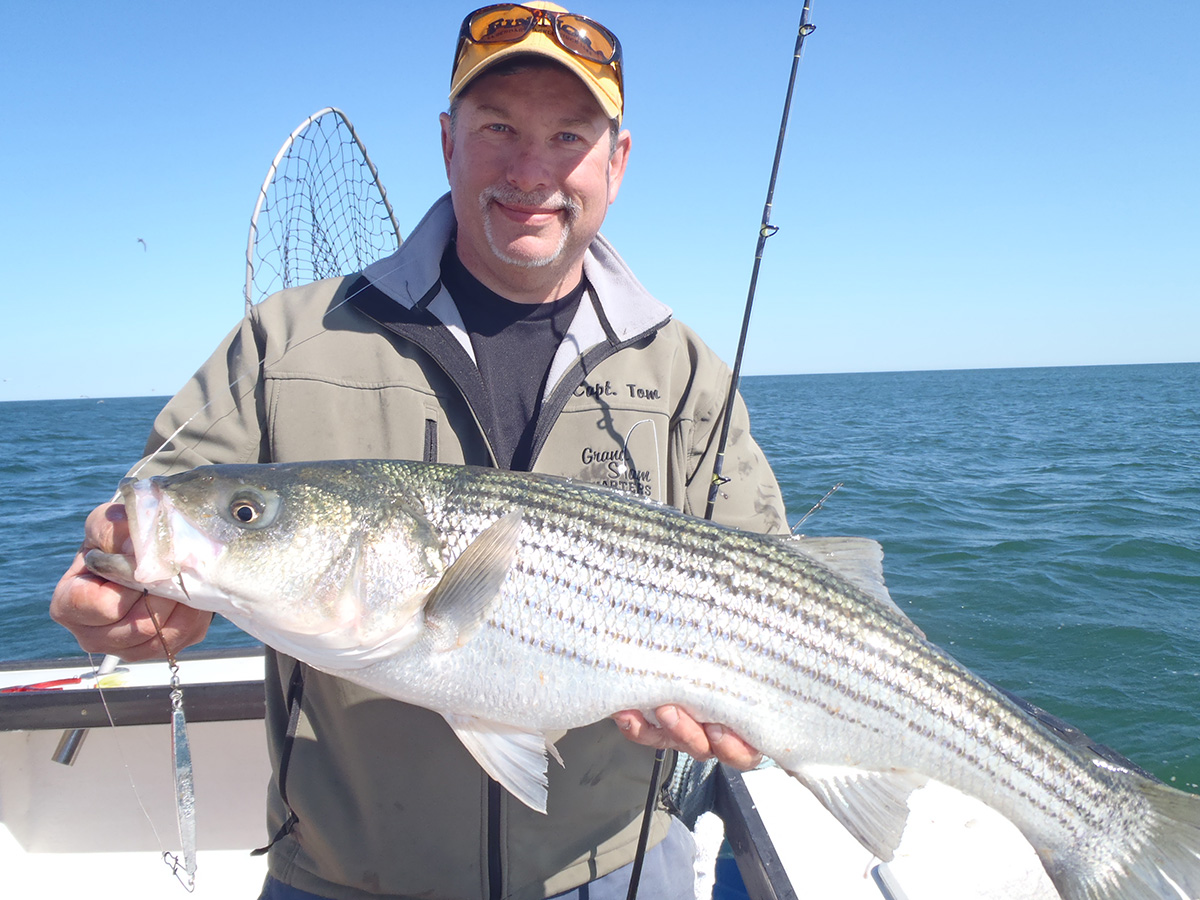 Although the northward movement of stripers through Montauk waters in June provides lots of great action for boat and beach anglers alike, it doesn’t last as long as the fall run that in some years may begin right after Labor Day and not end until sometime in November. The spring run, therefore, is measured in days, rather than weeks. Yet, the action can be just as intense as in autumn because lots of bait accumulates around the point in June, including sand eels, squid, sardines, bunker, as well as a variety of small bottom dwellers.

My June jigging opportunities come via Captain Tom Mikoleski of Grand Slam Charters, and I look forward to our trips with great enthusiasm. Although weather conditions, his booking obligations, and the cooperation of the fish are needed to make the trip happen, when we do manage to work out a date, we almost always have success.

The Captain is smart about these trips. Generally, the jigging window is short, but we fill the day plying for fluke, porgies or sea bass (depending on when the season opens). In this way, we pass the time, enjoy the fishing and put a few good tasting fish in the cooler. Then, when the tide is right, we make a beeline for the point. The best of the jigging occurs at the point when wind and tide push together in the same direction—an incoming tide with a southwest wind or an ebb tide with a northwest wind. Wind against tide is a no-no because it creates big waves and disrupts the efficiency of the drift. The action usually improves as the current builds and pushes a collection of bait species up and over the bottom elevations that abound there. It’s exhilarating to watch the flocks of terns and seagulls collect, hover, dive and then move off to another upwelling of bait in the rips as a bait ball is attacked and forced to the surface. Watching all this can be frustrating too, especially if we’re making our way from the bottom fishing grounds miles away. As my adrenaline roars to life, I just get crazy and impatient for that first bite. Still, I know what’s coming, and I remind myself that we can’t get there any faster than at full throttle and the rips will be boiling for a few hours. Relax!

Although other anglers troll umbrella rigs and work parachute jigs across, over and along the edges of the elevations, most anglers jig. I prefer diamond jigging and I’ve loved this technique since I was introduced to it decades ago. I like the interactive aspect: drop down, reel up a little, and jig, and I feel as if I’m right in the middle of the action below, much the way I do when I’m surfcasting with lures. Anyway, it’s not for everyone but I love it. However, unless the bight is “hot” it can be tiring, so if you’re jigging an Ava 47 with appropriate heavy gear over and over again without hooking a fish, the arms tend get cranky. Many jiggers drop, hit bottom and then wind the jig to the surface. I was taught a different way that not only have I found to be more effective, but a lot less tiring. I drop to the bottom as usual, turn the reel handle three or four times, and then hold the jig at that level while I snap it up about one rod length and let it flutter down. My arms get a break because I’m not reeling every drop to the surface, and I believe this technique works better because the jig remains in the bottom few feet of the water column where the fish spend most of their time.

Another option is to bucktail for the stripers—not the traditional cast and retrieve bucktailing so familiar to shallow water boat anglers and surf rats, rather a drop to the bottom and wait technique that’s much easier on the arms. Captain Tom offers this alternative when the bite gets slow, but I rarely take him up on it because I’m always hoping for a diamond jig bite. I guess you could say that I’m hopelessly hooked on diamond jigging. The captain changed to a bucktail rig for my friend Ross Squire because he wanted to try it. Tom attached a long leader, 6 to 8 feet of 80-pound test monofilament to a three-way swivel. He then added a heavy sinker to a different swivel ring: 6 ounces in slower currents but up to 12 ounces at peak tide. Finally, he tied 50-pound test braided running line to the third ring of the three-way swivel with a 1-1/4-ounce bucktail and strip of pork rind to the long leader.

“Drop it down to the bottom,” he said, “and reel up about four turns of the reel, and hold on. Unlike an eel bite, the fish will smack it and you’ll be into a fish. The idea is to ‘float’ the bucktail behind the sinker and just off the bottom. That’s why I don’t use a heavy bucktail. I want it to easily rise and fall behind the sinker.”

Opportunities to jig stripers in June vary, not only seasonally but with the strength of the current and availability of bait. Predators seek out feeding opportunities: a situation that provides an advantage for predators where they can handle the turbulent water while smaller bait struggles. In the surf, for example, a common advantage is gained when waves crash against a sloped beach because turbulence is created at the “lip.” Stripers, blues and weakfish can negotiate the hydrodynamic melee, while bait tumbles. All predators, land and water, unwittingly play a calorie game. That is, they instinctively seek out situations where they can expend the least energy and yet collect lots of calories. Some, for example, viewing lions while on safari vacations, might conclude the cats are just plain lazy because they may sleep 18 hours a day and hunt only in short spurts. The safari members would be right in their conclusion because all animal predators are inherently lazy due to the calorie game.

The calorie game may explain why fish glide off to staging areas where they are inactive for most of the day or night, then suddenly jump into feeding mode when conditions allow them to catch more calories than they must expend to catch those calories. A classic example comes to mind. During runs of weakfish, anglers often report that their sonar devices show piles of weaks in spots few anglers ply, but these fish cannot be tempted to strike. Yet, when the window of the right stage of the tide for efficient feeding opens, they leave these quiet staging areas and swarm on schools of bait.

So, at Montauk in June feeding opportunities develop with the help of bottom structure and strong current. It starts when bait schools are swept along by the current from areas away from the elevations towards the bottom structures. The current accelerates over the elevations, pushing the bait that begins to struggle against turbulence. Nearby gamefish, alerted by the increasing strength of the current and perhaps the smell of baitfish, edge towards the rips. At first the current is mild and little happens, but as the tide builds more and more bait, more and more gamefish slide into the rips and the action builds much like a crescendo in the finale of a piece of music. And above, on top of the water are the anglers doing their best to interrupt the calorie game for a few stripers.

Dragging a bucktail as described above is relatively easy and the hits can be amazing. Since the rips feature up and down bottoms, one of the obligations of the angler is to make sure that the bucktail isn’t too far off the bottom when the structure drops down, and conversely doesn’t drag along the bottom and snag as the structure rises. If an angler doesn’t bounce bottom here and there, it’s probably a good idea to let some line out to gauge how far off the bottom the sinker is. Similarly, if the sinker bounces repeatedly, make several quick turns to avoid snagging.

It is true that the entire structure isn’t covered with bait and fish. It is also true that the stripers and blues move when the bait balls move. So, what develops is a patchwork of bait and predators. Thus, as the boat drifts the bucktail moves through bait and predators and then out into unoccupied territory. This bucktailing technique allows an angler to cover lots of water on a drift and thus move in and out of schools of fish.

Give June striper fishing at Montauk a try. It is fun and easy fishing, and although there are often lots of schoolies in the mix, we always manage to connect with some cows too.