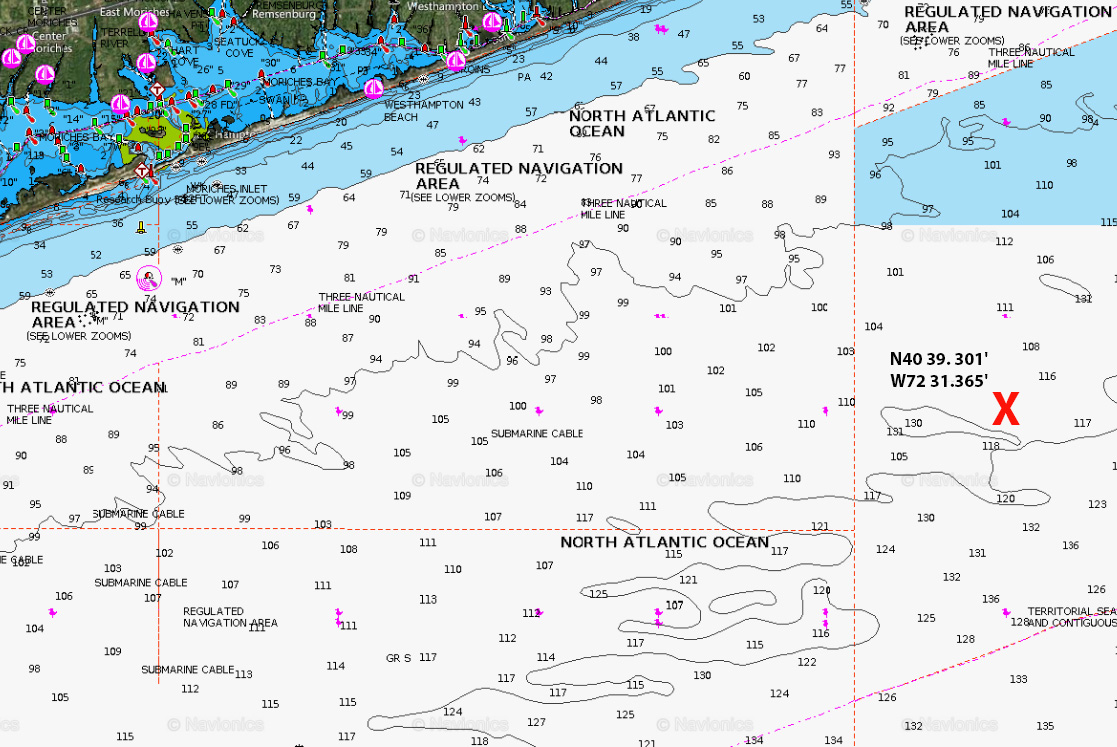 Sail approximately 13 miles southeast of Moriches Inlet to the coordinates above and you’ll be sitting smack over the Miller Wreck, which is the remains of a long ago sunken tug boat. No one seems to know the actual name or fate of the ship, however it is said that the fishermen who originally found the wreck used a Miller Beer bottle to mark the location, which is where the name is derived from.

The wreck lies in 120 to 130 feet of water along the edge of the 20 Fathom Curve and just a hop, skip and jump north of the first set of Fingers. The wrecks boilers, engine and copper clad hull are all easily recognizable to experienced divers who frequent the wreck. Scuba divers in search of copper and brass artifacts still return to the surface with some nice souvenirs consisting of the non-ferrous metals. In addition, the wreck hosts some nice lobsters that divers often look forward to for their evening meal.

With the location of the Miller being smack in the migratory path of local and offshore species, it offers year round possibilities starting with ling. Ranging in size from juveniles to baseball bats, there never seems to be a shortage of red hake over the course of the year. Naturally some months are more abundant and see larger fish than other months, however whether I’m on this piece during the winter and spring hunting down cod, or looking for a tournament winning thresher or mako shark in summer, or plucking out slob tog from the ship’s boilers during the late fall, a hi/lo or tandem rig baited with a strip of clam will assure you of putting as many of the tasty hake on ice that you wish.

From January through April, it is pretty much status quo here as a relatively good cod fishery is available through this period. Even with a string of nice weather and good sea conditions, which allow anglers to hit the wreck hard, it usually reloads rather quickly as the 20 Fathom Curve can be a pretty busy highway even in the dead of winter. Drifting a half or whole skimmer (ocean) clam on a basic cod rig works best. You’ll sacrifice some terminal gear, which is why you want to keep the terminal end simple. However, the reward comes mainly in the way of market size cod and the occasional mini-soaker in the 20-pound class. Anchoring is an option, but be ready to contend with the ling. Big sea bass move on the wreck by late April and May, but are off limits until the season opener. In the meantime, June through August sees myriad sharks visit the wreck for easy meals of ling, small cod, pollock and sea bass to satisfy their appetites. In the fall, the wreck plays host to all the common bottom dwellers as well as rock solid action with tackle busting blues. Blackfish, from rats to slobs, close out the year with white and hermit crabs having a significant edge when it comes to quality tog. Green crabs produce well, but expect to cull through a lot of short fish. The last word of advice is to stay as close or above the structure of the wreck as you can. Otherwise you may have to contend with masses of dogfish that sometimes inherit the sandy fringes surrounding the structure.