The NorthCoast 255 HT (hard top) is the latest addition to their three-season, weather-protected, sport fishing cabin product lineup that includes the 285 (introduced last year), the 235 and the 215. North Coast Boats is a division of C&C Marine and C&C Fiberglass, a family-owned, family-run business located in Bristol, Rhode Island, steered by Jose DaPonte at the helm. With a Portuguese boat-building heritage that includes a natural love and connection to the sea, Joe and his family have been involved in the boat building business since the early 1990s.

The NorthCoast 255 Cabin is a solidly build platform that doesn’t share its running bottom with any sister ship in the stables, it is uniquely hers. Sure, there’s a corresponding center console of approximately the same dimensions in the NorthCoast product line, but the length and beam are slightly different, which is the only way to fly. In contrast, other builders might have a trio of layouts (cabin, center console and dual console) built on the same hull with vastly different centers of gravity and balance, which will cause one to ride better than another, depending on changing loads and sea conditions. The 255 Cabin’s performance characteristics have been tailored specifically for that hull and the way that she will be loaded and run by her operators, which is a significant reason why she is unique among her peer group.

One of the most unique attributes of the 255 Cabin is that her three-sided open pilot house setup will offer weather protection for four crew members when underway. Two of these are courtesy of the helm and companion swivel seats and another two via cushioned benches that sit atop of fiberglass modules located on each side that feature a trio of tackle storage drawers, plus a 113-quart insulated cooler down under with on-deck drains. Yet another attractive feature of this beamy (nine-feet, five-inches) deep-vee sportfisher is her roomy cockpit, which measures 72-inches long and 94-inches wide (47-square feet), supported by almost 25-inches of cockpit depth. Standard coaming bolsters are positioned to afford most anglers with thigh-high comfort when coaxing large gamefish to boatside. If they are truly supersized, the transom gate situated in the port corner will provide a huge assist when trying to wrestle the big ones aboard. A 28-gallon recirculating livewell is positioned in the full-height transom cap, offering a light blue background color and clear top to keep your bait alive and happy. A bait-rigging station with cutting board is located under a flush transom hatch to starboard. Twin 139-quart fish boxes are set under the cockpit sole port and starboard, with each having its own dedicated macerator pump-out to evacuate the icy gurry at the end of the day. A pair of flush cockpit inspection hatches on the centerline allows operators to access critical bilge components like fuel filters, bilge pumps, washdown pumps, hoses and connections, etc. A clever, high-end battery switching setup is located under the starboard cockpit step that allows owners to select, charge and interconnect the trio of standard AGM batteries (engine, engine, house). Two pair of stainless steel flush-mount gunwale rod holders are standard, in addition to a trio of horizontal rod holders set under each gunwale. Raw water washdown is standard, as is the ability to flush-mount a pair of 12-inch multi-function displays at the dash. A 3-inch card Ritchie compass is positioned at the helm, as is hydraulic steering with an Edson S/S steering wheel, but if this were my rig, I’d opt for the 3-3/4-inch Ritchie SS1000 series blue card compass, along with a tilt helm setup to be able to adjust the wheel for different sized operators. The sliding side-windows in the pilothouse are a welcome touch, as are the angled forward windshields, which both vent outwards to provide a welcome breeze on those flat summer days.

Stepping down into the cabin, the basic amenities include a private head area with a freshwater sink/shower, a marine head with holding tank and macerated overboard discharge, plus a sliding door with storage shelves. The forward vee berth will allow you to catch a power nap in between fishing frenzies, or to spend the weekend at your favorite beachside hideaway. There is 75-inches of standing headroom in the cabin and head areas, along with a molded fiberglass storage module to port, that can be converted over to a true weekender with the optional galley package, generator and A/C.

Some competitive fishing boats are pretty, but they don’t hunt. When you get out there in the rough stuff, you quickly realize that beauty is oftentimes only skin deep. The NorthCoast 255 Cabin is pretty enough, but this Rhode Island girl can definitely hunt 24/7, no matter when or where you take her out.

The secret to her ride is a warped vee running bottom that sports 62-degrees of entry angle in the bow, to slice and dice opposing head seas, which transitions down to 22-degrees of angle at the transom. Like some of the classic deep-vee designs of yesteryear, the 255 Cabin sports a trio of lifting strakes per side that are artistically arrayed to provide lift and traction when you hit the throttle and to deflect spray when you are underway, especially in a crosswind. The Armstrong outboard bracket also extends her length-to-beam ratio and provides a little bit of lift to the overall ride.

Our test boat (hull #1) was powered by a pair of Yamaha’s next-gen F250 V6s, which are energized by a generous 4.2-liter displacement. This beefy sportfisher hit a top speed of 56-mph at 6100 rpm during our sea trial in Narragansett Bay, Rhode Island spinning counter-rotating 15.5 x 17-inch 3-blade SWS II stainless steel props. These are very impressive top-end numbers for a vessel that was loaded with four adults, 90-gallons of fuel and a few hundred pounds of safety, video and fishing gear. We turned 30-mph at 3500 rpm, 35-mph at four-grand, with a fast-lane cruise of 40-mph at 4500 revs, which will really get you to the next hot fishing spot way before the fleet. Fuel economy ranged between 1.4-to-1.6 MPG during our tests in this power band. Dialing it down to minimum planning speeds, I introduced some negative trim on the engines, in combination with bringing the bow down a bit via the Lenco electric trim tabs, to hold plane at 3200 rpm, hitting 25-mph in the process. This rig passed the ultimate twin-engine bluewater litmus test, planning relatively easily on one engine after once again, introducing some negative trim on the solo outboard and a lot of down tab on the port and starboard planes. We hit 30+ mph at 5400 RPM and 24-25 mph at a relatively sedate 4500 rpm.

Hole shots with both outboards operational were incredibly fast, averaging 3.5-seconds during multiple attempts. I found that by taking off with negative trim on both the outboard engine drives and the trim tab controls, time-to-plane was consistently faster, with reduced bow rise, which is the bane of many external bracket outboard-powered craft that temporarily compromises forward visibility.

The NorthCoast 255 Cabin starts off with an MSRP of $173,730, powered by twin Yamaha F200 four-cylinder, four-stroke outboards. The hand-laid 100 percent composite fiberglass construction features a foam-cored deck with two-tone molded non-skid (choice of gray or tan), foam-filled composite grid stringer system, high-density foam-cored transom, Armstrong dual engine bracket, high-impact rub rail with insert, and is supported by a 12-year structural hull warranty. The build and ride of this Rhode Island sport fisher exudes the traditional craftsmanship of New England boat building. Check her out – she just might be the right boat for you. For more information, visit www.northcoastboats.com. 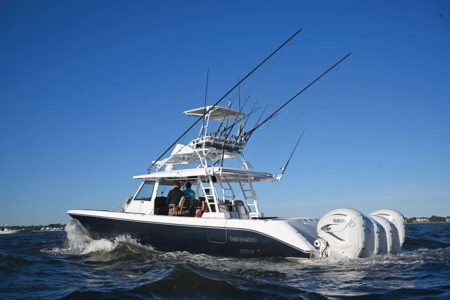 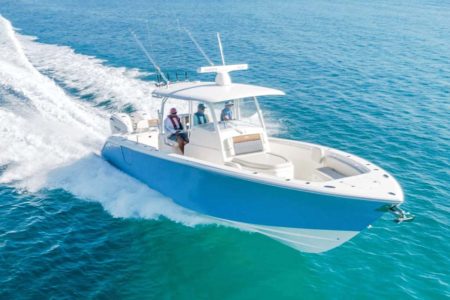 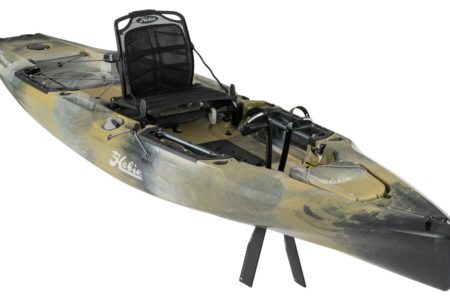